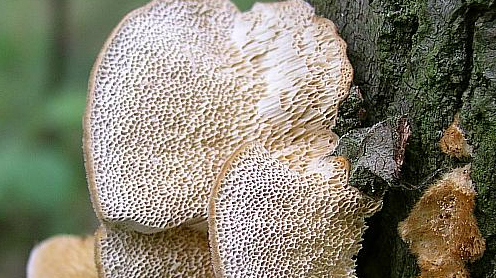 Funalia trogii - An annual mushroom, broadly attached laterally to the ground. Console-shaped, slightly elongated or spread out. Individual sporocarps grow out singly or tile-shaped hats one above the other. 10-120 mm wide and up to 60 mm wide, (3) 10-30 mm thick.

Hat in a semi-circular or longitudinal shape. Ocher, gray, brown, with a red, cinnamon, or faded to gray, never black. Surface covered with vertically protruding or adjacent tangled hairs not arranged radially. Sometimes it is covered with a dense, shaggy felt, without zones and stripes or indistinctly zoned, rough and velvety at the edge. The edge is usually thin and sharp, wavy, less often blunt.

Irregular pores, round, angular, fairly large, 0.3 to 1 mm in diameter, usually 1 to 3 per mm, with a serrated blade. White, yellowish, ocher, fresh pink fruit bodies, sometimes with a lavender shade, pink when pressed. Pale skin-yellow in old ones.

Pelvic, corky pulp, quite clearly flaky and fibrous when torn, hard when dry. Young whitish, later light brown. When damaged, it becomes pink. In reaction with KOH, it does not blacken, but may slightly darken.