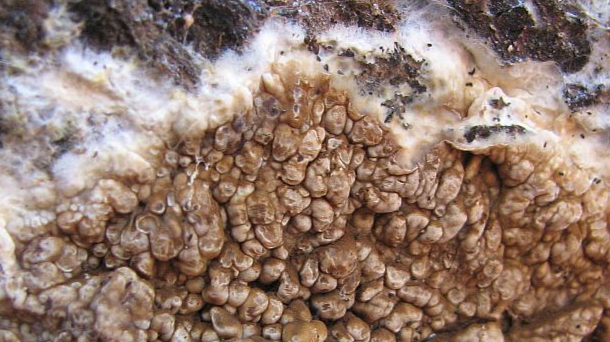 Coniophora puteana - Annual mushroom, spread out, covering an area of ​​up to several cm², thin or slightly thickened. Initially circular, with age forming extensive coatings, tightly adhering to the substrate, older sporocarps protruding at the edge, easy to peel off, 2 to 10 mm thick and several dozen centimeters long.

Occurrence: In forests, thickets, parks, on stumps and lying conifers, less often deciduous; also in buildings, on wooden basement floors, enclosures, bridges, constructions both in buildings and in the open air; very common and common. From summer to autumn.

Value: Inedible mushroom. One of the most harmful house fungi, causes strong and quick decomposition of wood.