Can't believe the last and only time I wrote about Tron (TRX) was in June 2020. I think Justin Sun's creation is already a classical cryptocurrency and needs little presentation. The so called "Ethereum Killer" still has a lot to prove until it can be considered as a replacements for the Ethereum Network.

Tron (TRX) is based on the TRON Protocol issued by the TRON Foundation, and was created to build the infrastructure for a fully decentralized Internet, with a multitude of systems, applications and transactions on the chain.

The Tron (TRX) value was in June 2020 was $0.016 and today's value is nearly ten times bigger, at $0.14. The value is still under the January 2018 All-Time High, when it reached $0.23. Tron didn't achieved great things in the last year, dropping one spot from the 17th  position in the cryptocurrencies global ranking.

Well, you may wonder what is the point for this Tron (TRX) flash-back! Well... finally Tron holders have a place where TRX can be staked for a "good-value" reward. I had my TRX staked on Atomic Wallet, than on TronLink, and the way the reward was credited was unclear and undervalued. The TRX strong point was the transaction speed, handling 2000 transactions per second, a speed thousand times faster than Ethereum and Bitcoin. Sun.io was launched in December 2020, distributing SUN for staking TRON or other tokens from the TRON ecosystem. Staking pools were opened for 14 days, than new ones were open. I seen this as a poor move, made against long term staking, as unstaking from the old pool and staking in the new one was required. After few well-rewarding pools, no new ones were added on the platform.

SUN was launched as a social experiment, and a component of TRON DeFi. The new token can be implemented by open-source smart contracts, and is used to develop community initiatives and other developed DeFi projects, such as lending, insurance, liquidity and  stablecoins.

Recently new pools were added, which made me unfreeze the Tron stash and stake it on Sun.io for mixed rewards. The new pools are offering multiple rewards, as more tokens are earned along with Tron (TRX). Users staking into the TRON  pool will receive mining bonus in 5 other tokens: SUN, JST, WIN, BTT and BTCST. 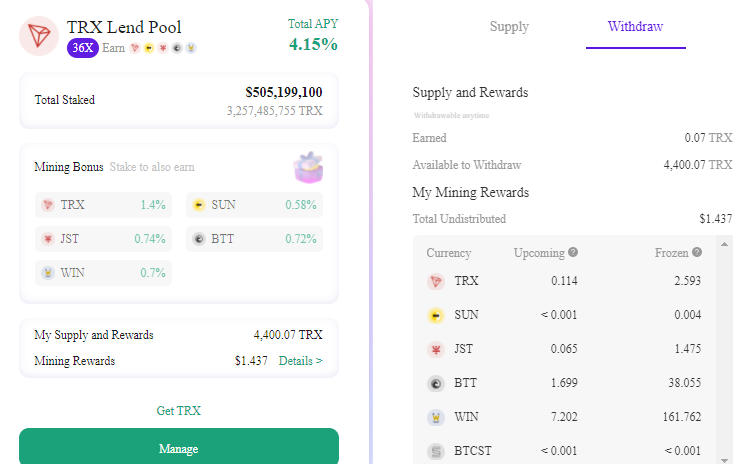 Just (JST) is the exclusive token for DAPP governance in the JUST ecosystem, a decentralized lending platform where users can stake TRX via JUST’s CDP portal to generate USDJ.

Wink (WIN) is a gaming token built in the TRON ecosystem, which aims to revolutionise the gaming industry with instant play, provably-fair and no transaction fees. 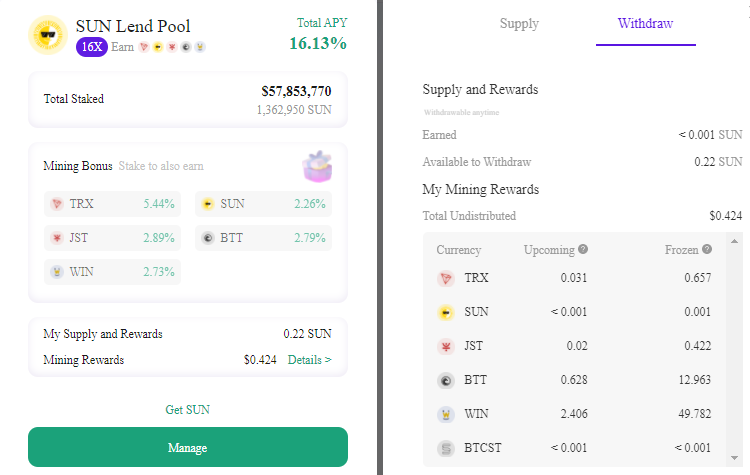 Bitcoin Standard Hashrate Token (BTCST) is the only reward token that is not created on the Tron Network. BTCST is a token collateralized by 0.1 TH/s of the actual Bitcoin mining power standardized to an efficiency of 60 W/TH.  Staking BTCST will create daily Bitcoin rewards and can be used for mining and hashpower at low cost. See more about BTCST in my previous articles, covering the project details and staking