What is Bitcoin Standard Hashrate Token ?

Bitcoin will always trend in the people's interest and will always be a desire. Adding Bitcoin (BTC) in the portfolio has become easier with the Bitcoin Standard Hashrate Token (BTCST) on Binance Smart Chain. The BTCST is a token collateralized by 0.1 TH/s of the actual Bitcoin mining power standardized to an efficiency of 60 W/TH.  Staking BTCST will create daily Bitcoin rewards and can be used for mining and hashpower at low cost. BTCST was like a knight in shiny armor that can battle the mighty Bitcoin Dragon and bring some nice dragon scales in the kingdom treasury. The Bitcoin Standard Hashrate Token (BTCST) was launched in December 2020 and 1,000,000 tokens were distributed through the Binance Launchpool. It was then when I learned about it and when I started my journey into the BTC mining ocean. It was a smooth journey until now, but you never know with crypto, as the ship can sink or hit an iceberg anytime. I farmed BTCST through the Binance Launchpool, than farmed more on Pancake Swap. I also invested $146 to buy some from Binance, following my gut feeling and seeing the great potential of this token. Throughout February, the reward for staking 2.46 BTCST was 0.000285 BTC, approximately $17. The amount was more than 10% of the initial investment and what I paid will be recovered before the end of 2021. The BTCST surged to $360 per unit and the value of 2.46 went to $890.10. This growth was recorded between 27th of January and 27th of February, and was 6x of the investment. When some projects are changing the project tokenomics, they usually make a whole bag of coins into a more valuable token. Not long ago Elrond Network created Elrond Gold (eGLD) from Elrond (ERD) at a ratio of 1:1000. This wasn't the case for BTCST, as the incredible demand required a breakdown. This led to a multiplication of the tokens and 1 BTCST was transformed into 10 BTCST. After the "fork", the value of 10 new tokens was identical to the value of 1 old token. This new system changed the tokens in my stash from 2.46 to 24.68. The change wasn't a pull back, and the growth continued. I am now 10x on my initial investment and very happy with how BTCST is keeping the upwards momentum.

New Dashboard - New Tokens. I checked the 1-B.TC app at the end of March and I could see a higher rate of return than what I've earned in February. The amount of Bitcoin earned in March was $20, and the total reward was 0.00061991 BTC on the 31st of March 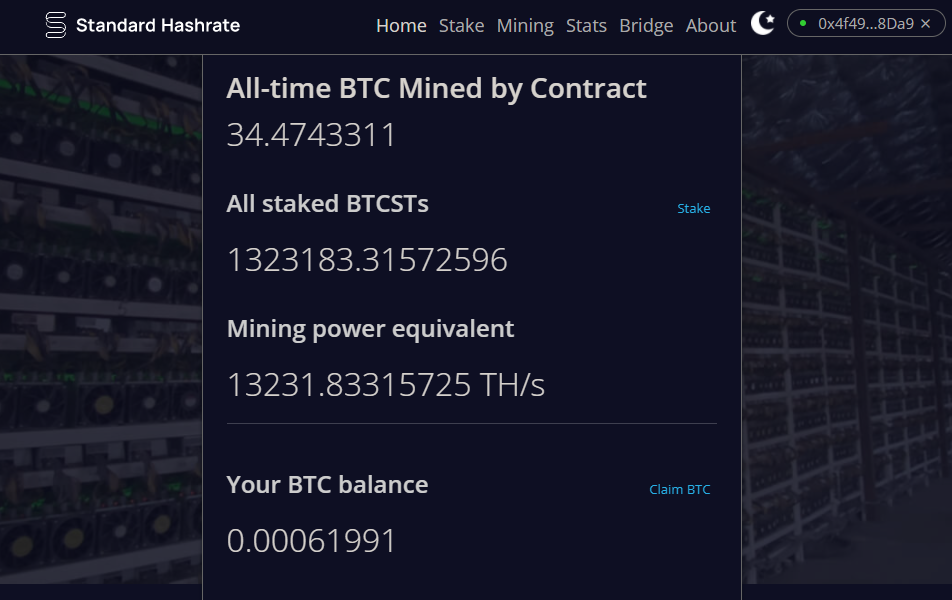 Few days ago, I seen news about the v2 launch and the dashboard upgrade so I went to check it. The v2 of the app came with a new layout that looks modern and straight forward. The dApp Stats page is updated in real time, containing details about the TVL, prices and tokens information. 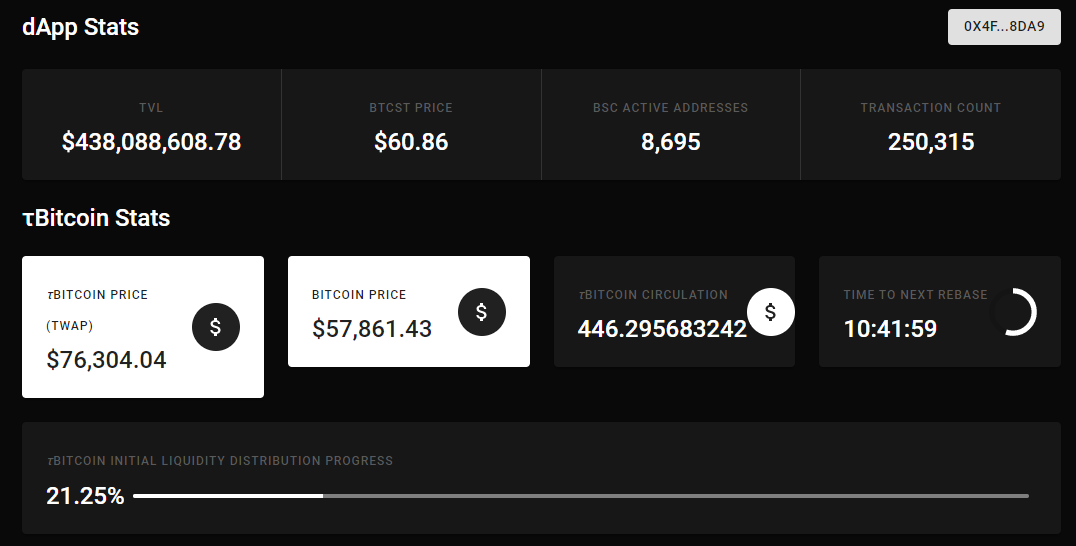 The earned rewards and vaults can be found under the "Lossless Mining" tab. BTCST, BTCB and τBitcoin can be earned without any impermanent loss. After the implementation of v2, BTCST holders can now mine BTCB, BTCST and the new τBitcoin. τBitcoin is a synthetic Bitcoin pegged 1:1 to Bitcoin in accordance with the mechanism of the Tau Protocol. The token is suitable for DeFi use and is backed by miners representing 12% of the global hashrate. The contract address for τBitcoin 0x2cD1075682b0FCCaADd0Ca629e138E64015Ba11c and the address must be added as custom token to be visible in the wallet.

There are currently 5 live vaults, with variable APY. Bitcoin Standard Hashrate Tokens (BTCST) can be used to mine BTCB, BTCST, with a daily reward distribution cycle. The BTCST - BTCB vault is the v1 Vault while the BTCST - BTCST implements the first community snapshot. The τBitcoin can be mined by staking BCTST, BTCB and πBitcoin, with a reward distributed for every block.

I unstaked the BTCST from the BTCB mining to stake it into the τBitcoin Pool, and take advantage of the 736% APY. When the reward ratio and the APY will drop, I will move the BTCST back to BTCB mining. The fee paid for the transaction was $0.19 and the transaction was instant. The estimated daily reward was approximated at $30 πBitcoin. (Any Ethereum fans around?)

The claimed BTCB was added to mine τBitcoin as well, for a $0.18 fee. The APY in this pool was only 51% but I am still earning rewards by staking earned rewards. Only 21.25% of the πBitcoin initial liquidity distribution took place until now, making πBitcoin very profitable. The fee for the transaction was $0.18 worth of Binance Coin (BNB) and the estimated daily reward is $0.049 πBitcoin.

I returned the next day and claimed the τBitcoin to put it to work at 500% APY. The estimated reward will be $0.40 which will cover the transaction fees I paid until now. 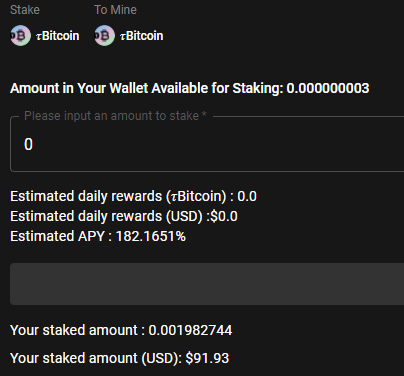 The Covid-19 pandemic still looks far from being over, and I get nostalgic while seeing Facebook memories from holidays, parties and fun things. When was the last time you had fun?