Splinterlands Battle Challenge - No water banter with the Kulu Swimhunter

Folklore says that swimming against the tide is always a bad idea, swimming against a kulu swimhunter is deadly! The aquatic beasts will hunt in packs, using tentacles to wield all kind of "weapons" such as spears, coral, and even fish.

The Kulu Swimhunters are very aggressive, killing for sport and leaving a trail of destruction in their wake. The promise for battles and hunt is what motivates them ... is no water banter with the Kulu Swimhunter. There are nearly 150,000 Swimhunters in circulations, with a very good market price. This Chaos Legion Water monster costs 4 mana, and comes with 4 health, 2 speed and 2 ranged damage. This card has no ability and will not gain any ability as it upgrades. 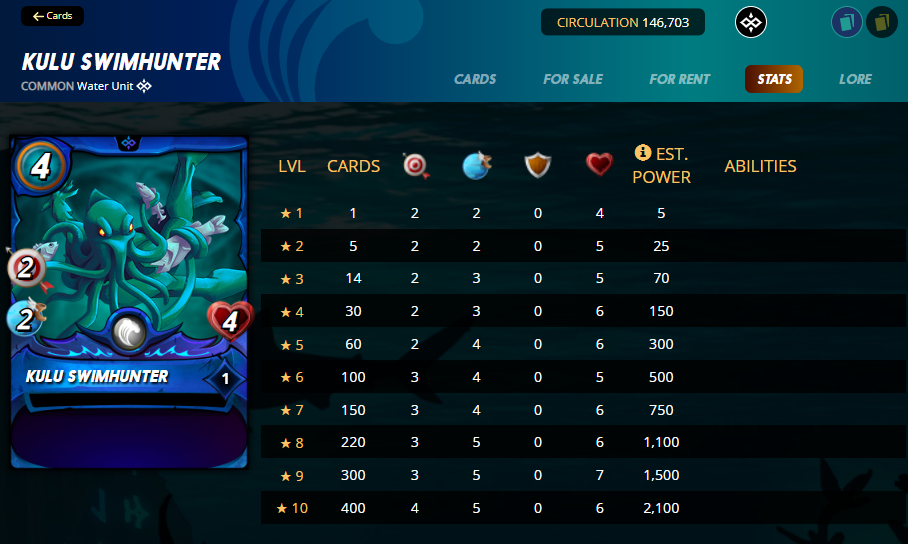 I upgraded the Kulu Swimhunter to level two only because it was ridiculously cheap to do it. It has 5 health points now and this battle challenge will mark the first time using this card in battle.

The opponent chose the Drake for one extra armor with a Death Splinter/ Neutral team. His tactic was to delay the damage and hit with sneaky attacks. My tactic was to nuke whatever enemy stands between me and the victory. The monk was the first victim, as he was hiding and protecting other monsters. The Swimhunter took some damage but is still in good shape.

The opponent's Riftwing scavenged with every fallen monster and managed to keep my attacks at bay for another round. The Kulu Swimhunter fell in battle and my army of fishes went for revenge. The battle is now 3 against 4, and at this point was looking as an evenly matched duel.

All hail fish power! Badger out ... Riftwing out! Is now Abyssal Monsters v Snake and as you may correctly anticipated ... the Abyssal Monsters' will have fun with the snake. See the full battle here!