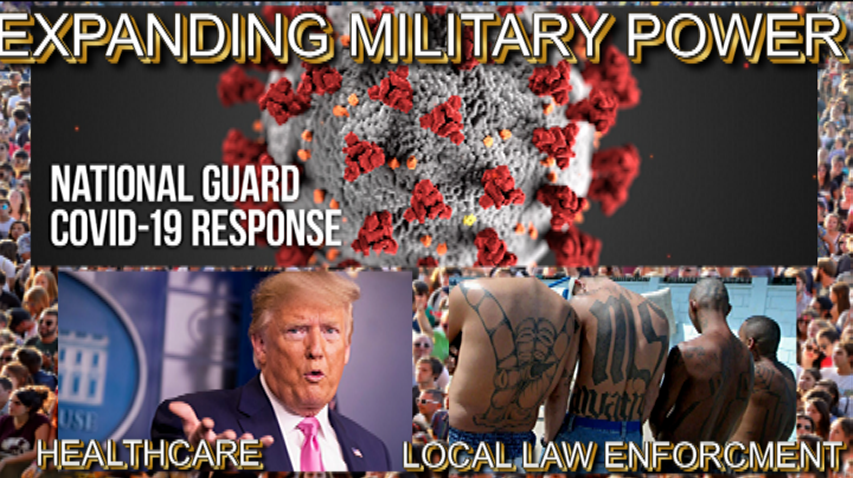 NWON - The increasing new normal police state unfolding around the world continues as President Trump expands yet again, domestic military authority in the U.S. The federal government can now use police state tactics under the cover of law enforcement and CoVid Testing procedures, both formerly civilian areas of authority.

The Republican and democrat, good cop and bad cop routine unfolded into yet another predicable set of actions to expand federal authority and military power in civilian law. Neighborhood gangs are now terrorists and and personal health records are now under National Guard jurisdiction.

Trump expands federal authority by edict, usually aimed at issues popular with his voters. The good cop, bad cop tactic of increasing federal power, under control of the political parties and their global donor/investor owners has been going on for a while now however since 9/11. The takeover of public health records is a clear power grab of individual papers, unlawful search and seizure, without due process and without a warrant.

Yet the real news is that the People are willing to place total control of their lives, their mental and physical and emotional  health, under the military authority of the U.S. government.

According to Fox News this is the goal of the U.S. Justice Dept. Whether or not this new federal power will actually work any better than the increasing militarization of the "War on Drugs" is debatable. What always gets disrupted and destroyed in this federal control process is the U.S. Constitution's protection of sovereign individual rights under law.

Under this edict, Al Capone would have been a terrorist. He got foreign money. He became the law in US cities. He had enforcers of his law. Although the Capone gang lacked the colorful ritual gang loyalty and entrance rituals of today's MS-13, entrance to the gang and loyalty to it was a life and death matter.

Will hospitals now be potentially subject to seizure under certain conditions, if they fail to turn over health records to the military? And why does the military need to be a go between to a national publicly accessible health statistic database? It makes no rational sense.