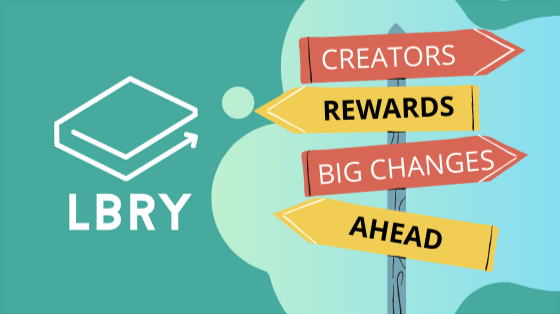 The LBRY Platform announced today it is making big changes to its Content Rewards formula with its next 2.0 update coming in late September. The update aims to increase the per-view rewards and end the fixed monthly reward for the creators. LBRY goal is to be less arbitrary and more sustainable and fair when it comes to rewards. The goal is to reward engagement and the new rules are in line with this goal. If you are a content creator in the LBRY platform or if you were already planning to join make sure to learn the new properties of the new reward system below.

Properties of the new rule according to LBRY:

The new rule also marks the end of creators' monthly rewards incentives. Currently, content creators that have a YOUTUBE account with 500 followers or more earn a generous monthly LBC reward simply for syncing the YouTube account to the LBRY platform and having videos automatically uploaded on LBRY. As an incentive, those creators receive a monthly reward based on how many subscribers they have on their YouTube account. This rule magnifies the proportion of the rewards significantly but does not focus on LBRY engagement.

According to LBRY "The current system rewards creators too much for having a large sub count on YouTube, and not enough for creating compelling content that is of interest to LBRY viewers and promoting their LBRY channel." This program will be discontinued altogether. Content creators who had their accounts enrolled before the update coming in late September will continue to receive the creator monthly rewards for a year since the last enrollment. After that, it is all gone. If you are a YouTuber and you have been planning to make the sync NOW is the perfect time to do it and lock in those rewards for the last existing year. Only a few days left. Join LBRY using my LBRY referral link and receive an extra LBC reward.

Timing of the release according to LBRY: "The view reward change will happen sometime in September, no later than October 1st. New channels that join through the YouTube sync program will no longer be eligible for monthly rewards. The exact cutover will be announced on the official @lbry channel and your view rate will be eligible at that time."

In the passed LBRY wanted to incentivize big YouTubers to join the platform and it is very understandable they rewarded Youtube creators who joined into the platform early as a token of their support. The Fixed Monthly Reward was a great program but now the strategy has changed. LBRY want to encourage the large Youtube channels who joined LBRY, to create content for LBRY only or to release their content on LBRY first to encourage their audience to join LBRY and enjoy the exclusive content. The Future LBRY Exclusive Program is all about that and according to LBRY: "If you have over 500 followers on LBRY or over 20,000 on YouTube, email [email protected] to learn more about this initiative." Hence another opportunity to earn.

Hope I get to see you on the LBRY platform someday. I am truly enjoying the ins and outs of the platform and the direction that it is heading. Despite not having a Youtube account I still Synced WITH IT! I was once sad to leave YouTube but honestly Proud that my channels are LBRY EXCLUSIVE. I do plan to join other video platforms but will stick with DECENTRALIZED ONLY.

Stop by, check it out and support on the links below.

All my best, Michelle M