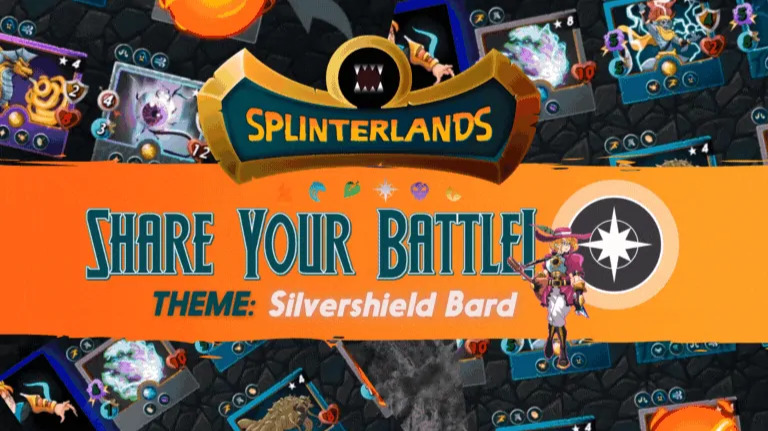 Low mana matches always are good for monsters that have 0, 1 and 2 mana. Only one 0 mana monster that can be use right now which is the furious chicken. For 1 mana monster there is Creeping Ooze that can be used by all splinters. Specifically to the life splinter the 1 mana is the Silvershield Bard. The following battle is one where I was able to use Bard and win.

I started out with Silvershield Knight followed up by Silvershield Warriror, Shield Bearer, Silvershield Assasin, Silvershield Bard, and end with Sand Worm. I chose this formation to take advantage of stampede while also having heal out as rule sets.

My opponent went with fire splinter and started with tanker in Living Lava, Fineas Rage, Spirit Miner, Spark Pixies, Fire Elemental and ending with Pyromancer. The formation indeed look strong but remember one of the rule set is stampede. This will help me in the match more than for my opponent. By the end of the first round my opponent's Pyromancer was knocked out. While my formation remain alive and intact. By end of round two my opponent was down to three monsters while I still have my entire formation. What is interesting is all their range monsters are now knocked out. My formation fell apart once Shield Bearer was removed. What helped me though is my opponent's tanker was down to 3 health and they only had another monster. I still had the advantage when it comes to quantity of monsters with 3 versus their 2. I won by a thin margin as it came down to my Sand Worm just having enough Melee attack to knock out my opponent sooner than they did against me. While I still won my silvershield group was not the one who was last to stand but a reward card in Sand Worm. I may have to rethink whenever I see stampede rule set is in play. If it were not for the high melee to create a knockout my monsters would not have the second hit on the next monster. The additional hit gave me the advantage of literally having a double strike only on two monsters instead of one.

With my Silvershield team contributing in defense more than offense it is also worth mentioning that my Silvershield Bard did not do much at all in the battle. It appear that the monsters was pretty much a filler instead of anything else. In this specific battle it certainly was not ideal to put Bard into the formation. Ooze or even Furious Chicken may have been a better option. Those monsters at least have the potential to attack. While Silvershield Bard at the time had no attack stats.

Link to the match if you want to watch.