The claims made in this post were reproted as misleading. Please do your own due diligence. Note that opinions published on Publish0x as solely those of the author, and not opinions of Publish0x.com 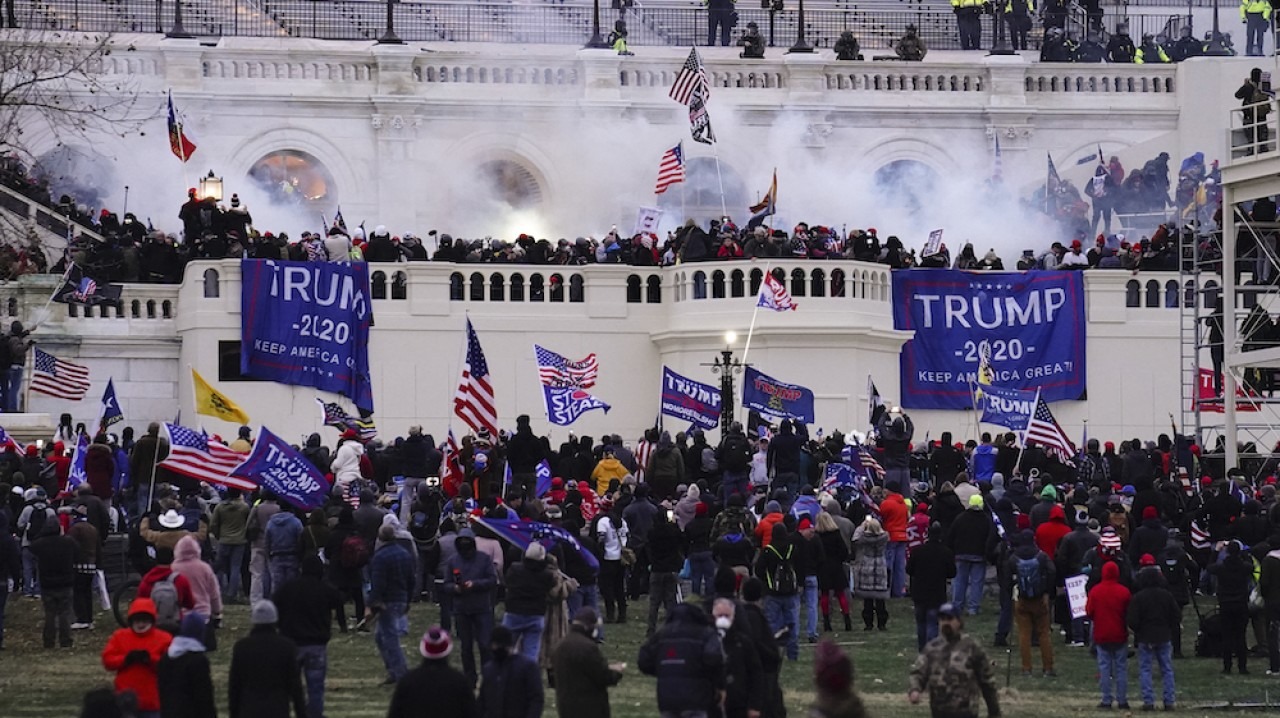 How The Insurrection Narrative Crumbled

Rioting is wrong. I opposed the violent actions done on January 6 and I also oppose the rioting that has plagued Minneapolis. However, stretching the facts and making extraordinary allegations without corroborating evidence are also incredibly wrong. This is exactly what the mainstream media did following the Jan. 6 protest and even worse, news outlets tried to milk the hysteria.

Incompetence from the Prosecution

According to Reuters, over 400 people linked to the Jan. 6th Capitol protests were arrested. However, none of them were charged for sedition and prosecutors struggled to find anything that would corroborate their grand claims.

To name a few examples, prosecutors alleged that Thomas Caldwell had a leadership role with the Oath Keepers and received Facebook messages while at the Capitol including one telling him to "turn on gas" and rip the floorboards. It turned out that the prosecution lacked evidence that (1) he was a dues-paying member of the group and (2) was even at the Capitol at the time. In addition, the people who sent him those messages were more than 60 miles away from DC and had no connection to the Oath Keepers.

Prosecutors also alleged that Proud Boys member Ethan Nordean used encrypted messages to lead the group. They later acknowledged that Nordean's phone battery died on Jan. 6 and was not functional the entire day. A judge later denied a prosecution bid to jail Nordean and cited a "dearth of evidence" that he directed other Proud Boys to use or carry weapons.

There was also the case of the "zip-ties" man who allegedly brought zip ties to the Capitol to commit insurrection. However, this was not the case. To quote Glenn Greenwald who also chronicled the prosecutors' cases:

But on Jan. 21, the “zip-tie man’s” own prosecutors admitted none of that was true. He did not take zip-ties with him from home or carry them into the Capitol. Instead, he found them on a table, and took them to prevent their use by the police. 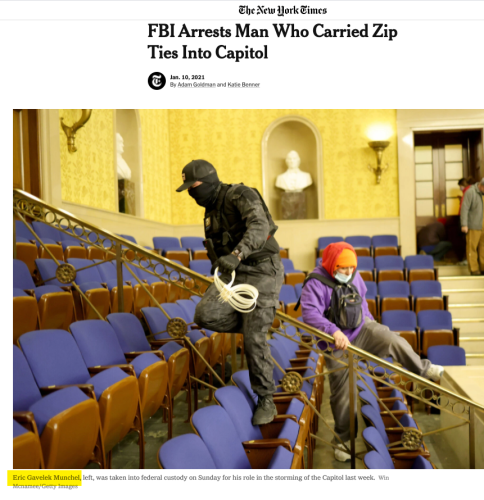 The NYT claimed that Eric Munchel carried the zip ties into the Capitol when in reality, he found them under a table.

US Court Judge Amit Mehta was also not too pleased with the prosecution's behavior. The judge was surprised to see Michael Sherwin and other officials interviewing with 60 Minutes as investigations were still ongoing. Mehta described their escapades of "anonymously divulging internal department deliberations" to be "contrary to department policy". It felt like the prosecutors did not take the cases seriously and treated them more like a big show.

After the Jan. 6th protests, the mainstream media like CNN and NPR did not hesitate to milk it dry with allegations that Inauguration Day will erupt into violence at all state capitols. In response, all state capitols locked down and the military patrolled the streets of DC in anticipation of more chaos.

The reality? The supposed violent plots amounted to just a "smattering of right-wing protesters" to quote the Washington Post. In fact, agents arrested a self-described hardcore leftist, Daniel Baker, who threatened to "armed racist mobs WITH EVERY CALIBER AVAILABLE" on social media. Baker was not the only radical leftist that engaged in criminal activity that day. Antifa vandalized buildings in Seattle and Portland in protest against Biden's inauguration.

And of course, there was the Q-Anon conspiracy. The mainstream media passed around "news" like a hot potato that Q-Anon plotted to take over the Capitol on March 4. In response, the House cancelled the its session for that day. However, the outcome was pretty much the same as Inauguration Day; there was no storming of the Capitol. The extraordinary claims were followed up with another wet fart. 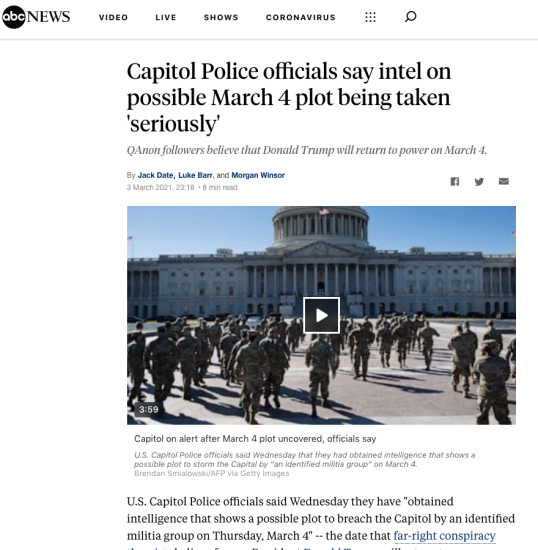 Mainstream outlets like ABC tried to hype up the threat of Q-Anon only for Mar. 4 to pass by peacefully.

Nothing irks me more than how Officer Brian Sicknick's death was reported. It all began when the New York Times published two articles on Jan. 8, claiming that Sicknick was murdered by a pro-Trump mob. This narrative quickly spread to other mainstream outlets like CNN. In this page, for example, CNN claimed that Sicknick was "killed responding to the riot that erupted in the [Capitol]". The officer's death was even referenced in the Article of Impeachment against Trump (p. 4, ln. 8-14) and the House Democrats' pre-trial memo (p. 28).

How the MSM portrayed Sicknick's death.

Unfortunately, the damage was already done. The "Pro-Trump mob killed a police officer" narrative spread like wildfire throughout the MSM and was referenced in the Article of Impeachment and the House Democrats' pre-trial memo. Oh, and guess how outlets like CNN handled the news... 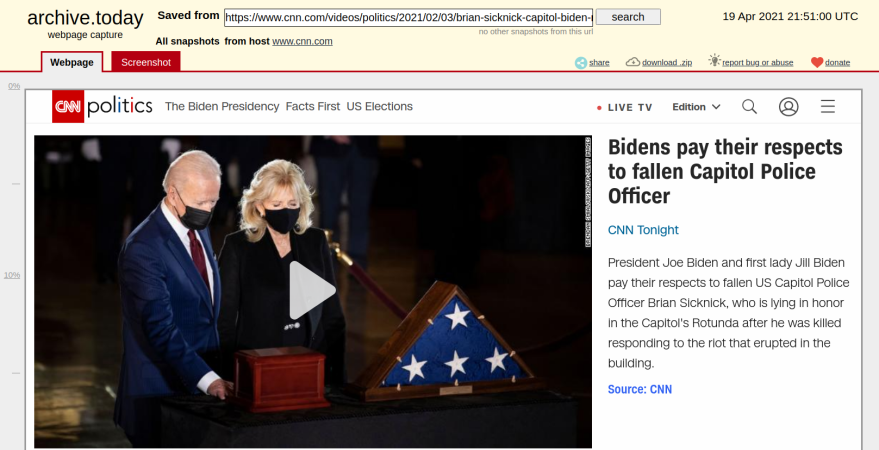 I literally just archived this yesterday.

What it looks like now. See how CNN did not mention what was exactly changed from the original text. Had I not archived the page, no one would ever know about this.

What happened on January 6 was lamentable. Unprovoked violence, regardless of where it comes from, must be condemned. However, the mainstream media's coverage (more like commentary) of the protests was even worse. The MSM fearmongered with its cultish apocalyptic allegations to throw its audiences into a tizzy. And when contradicting evidence comes to light, the news outlets just quietly slip in an update in hopes of no one noticing the original mistake.

If you think I'm an apologist for the Jan. 6 violence because I dared to criticize the MSM's coverage, then you are part of the problem. Properly tackling this issue at hand requires appropriately placing blame on the parties that contributed to the mess. That includes not just the protesters, but also law enforcement, the mainstream media, and the people who took those false narratives at face value and spread them around.

I think it is worth repeating my advice from "CNN's Terrible, Horrible, No Good, Very Bad Week":

A key word of advice: Do not trust any single news source. If you want to be up to speed on current events, then you would need to read and listen to as many perspectives as possible. Yes, that entails reading or listening from outlets you despise. If that is too hard, then look for unfiltered primary sources. You don't like Project Veritas or James O'Keefe's commentary? Then only watch the first hand footage (provided it is not doctored in any way) and make your own judgement.