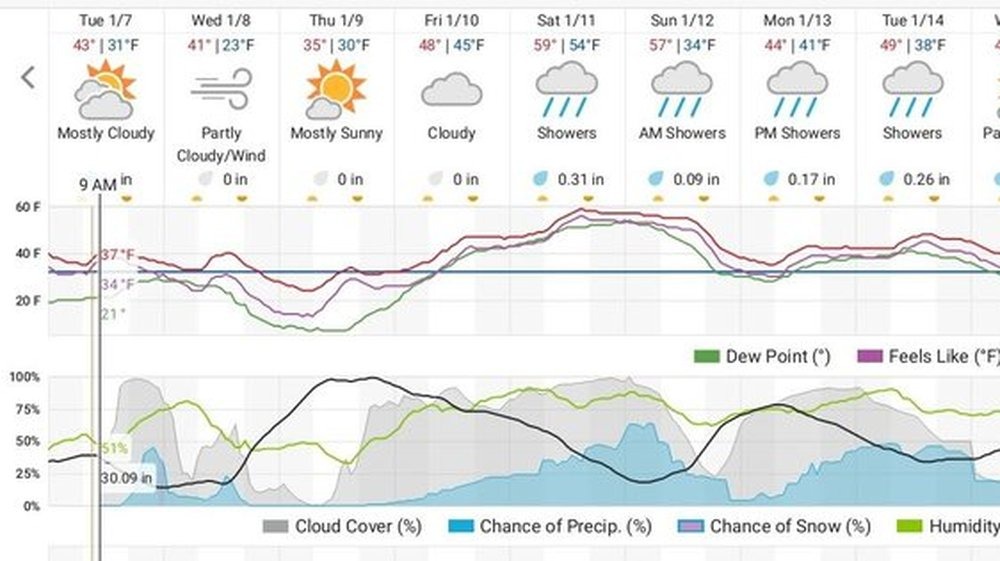 I did a comparison of weather apps for my android phone. Nothing professional, but five or six of the apps with the highest ratings. None of the apps are as good as the Weather Underground used to be before IBM ruined it. Right now, the best option for getting detailed temperature forecasts and chance of precipitation numbers for the next few days is to use Firefox web browser, create a bookmark to the wunderground.com 10-day forecast, and then choose “Add shortcut to Home Screen”.

That said, of the apps I reviewed, I think that one simply named “Weather” by Perfectly Tool Apps Lab was the best. A good data summary and next to no advertisements (I suppose that can change at any time...). Details follow below.

For people who work or are growing plants outside, the weather can be very important. It is very useful to me to see the predicted temperature and precipitation probability for the coming week. Here is an example of what I find very helpful, taken from a page on wunderground.com

For years now, I was able to see a little less-detailed version of this on the mobile app from the Weather Underground. Recently, IBM took over the company and made the app look like all the other cheesy apps. You now have to scroll past a HUGE readout of the temperature (you are standing in right now) that takes up the entire screen. The trimmed-down version of the above data has been squashed as to make it almost unreadable. In short, they ruined the app. Maybe somebody from the app team will read this and try to get the serious weather information to the top again and make it more readable....

Note: The Weather Channel app: I assume the most popular weather app for mobile phones in the US is The Weather Channel app. There is so much extra junk and advertisements in this app that I would never consider it. If you have some older hardware it could even slow it down. I would not recommend it unless you are going to pay to have the ads removed.

I like the simplicity of this app and I think it puts the information in a logical order. There is a trend line for the immediate weather changes and then a decent grid showing High/Low values for the coming week.

The background can be made very clean and easy to read. There is an advanced radar view available. I was able to add new locations with “City, State” search (some of the foreign-based apps failed US city searches).

This app also had the best “Notification Bar” option. You can toggle several looks and switch between an hourly trend line and a six day forecast.

CAUTION. Some of the apps say you can get rid of advertisements for something like 3-5 USD. When I paid for the wunderground app it was for a YEAR. This app says get rid of ads for 0.99USD per MONTH. On the other hand, I did not see any ads when using this app.

Even in it’s newer, harder-to-read version, this app is still better than most because of the lack of advertisements. If you scroll past the HUGE readout of the current temp (e.g., that you are standing in), and past the radar (which is better served as its own app), and go down to the bottom of the hard-to-read forecast, you can select “MORE” to see a more readable version of the data. There, one layer deep into the app, you can switch between day and hourly forecasts. It’s a pain.

Well, those are my favorites.  The rest of the reviews of Best Weather Apps for Android is on my website.