Ashetan Maryam (Saint Mary) Monastery is about a two hour hike east of the city of Lalibela in Ethiopia. Compared to the churches within the city, the monastery was unremarkable both inside and out, but still impressive considering it was carved out of a rocky hilltop by human hands. It was commissioned during the rein of King Lalibela during the 13th century. The best thing about the trip were the portraits I took of the resident priest. 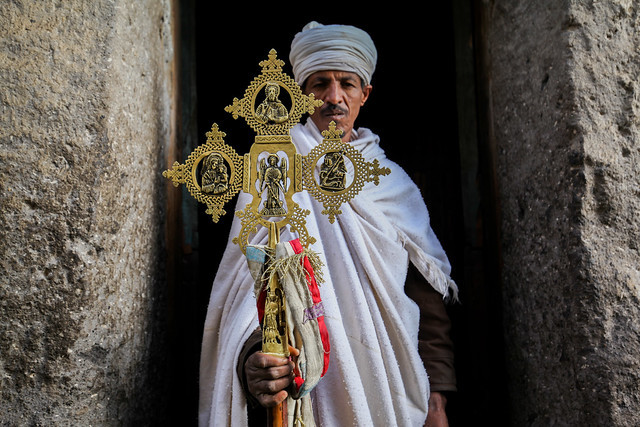 1: Here our friend holds the first of a few relics kept at the monastery, an Aksumite cross, with each section depicting a religious scene. This includes my personal favorite of St. George slaying the dragon on the right side. The priest’s facial expression just looks so natural! 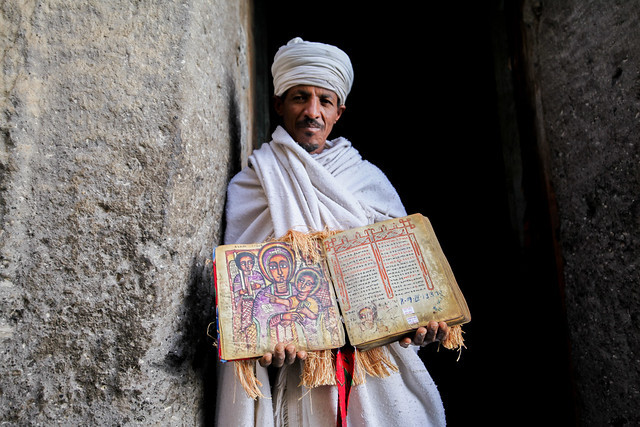 2: In this photo, he models an antique bible, which has hand-painted writing and artwork on velum. I swear I didn’t pose him at all for this photo! 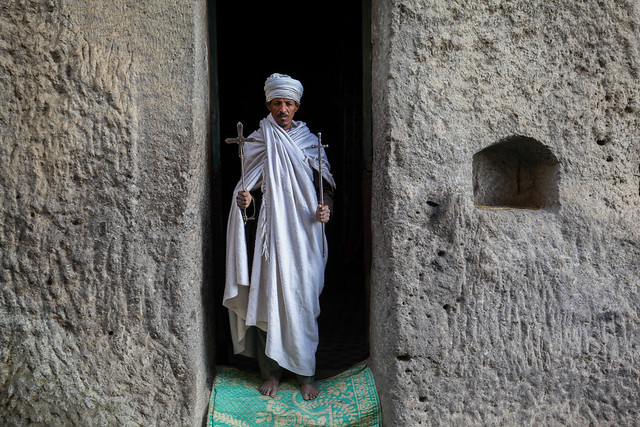 3: Holding two old hand crosses I was told date back to the original construction of the church 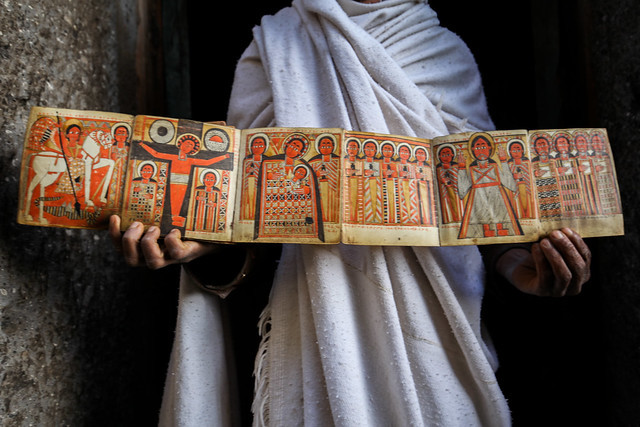 4: A fold-out section of one of the holy books depicting many scenes from Christianity. 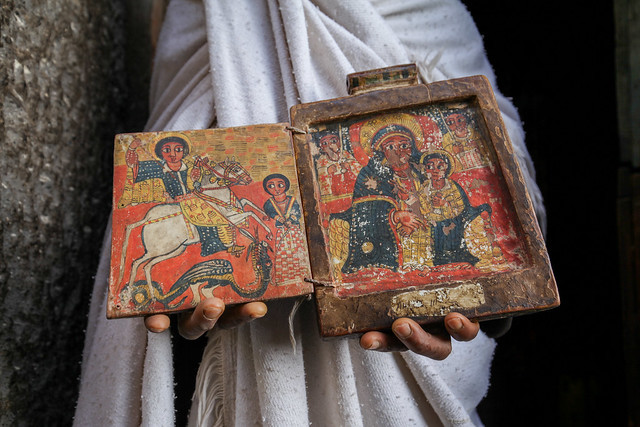 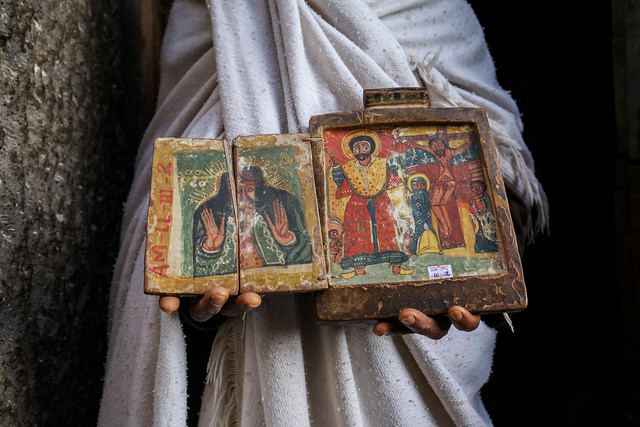 5-6: A two-sided icon depicting scenes from Christianity. One side is has been broken, but side depicting St. George slaying the dragon is in pristine condition. 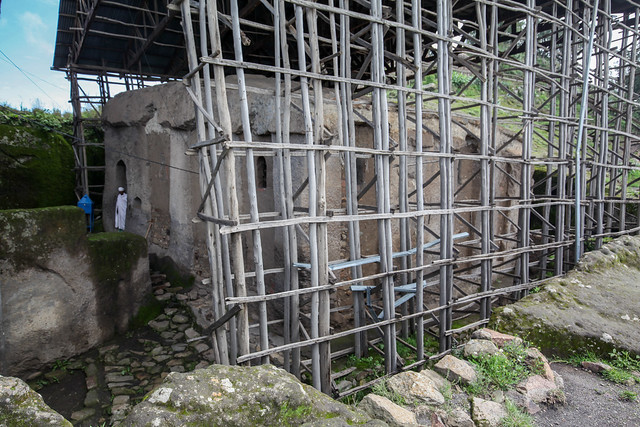 7. This is the monastery itself. As you can see from the surroundings, it was carved out of the stone hilltop. A less modern canopy has been constructed over the top of it for preservation purposes. 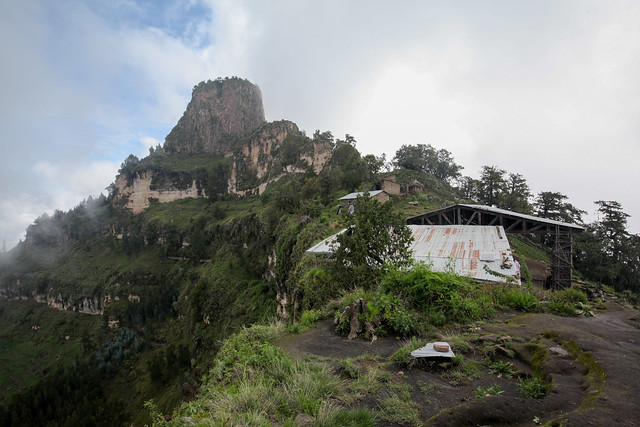 8: In this photo you get a feel for the location of the monastery. The mist kept rolling in and out, so it was very difficult to get a clear picture. Standing on this spot, nearby you could here a priest reciting the early Ethiopian language, Ge’ez with a young group of deacons. Ge’ez is now only used in present day by the church. Here’s a raw video of it: https://www.youtube.com/watch?v=8romclZzBf8 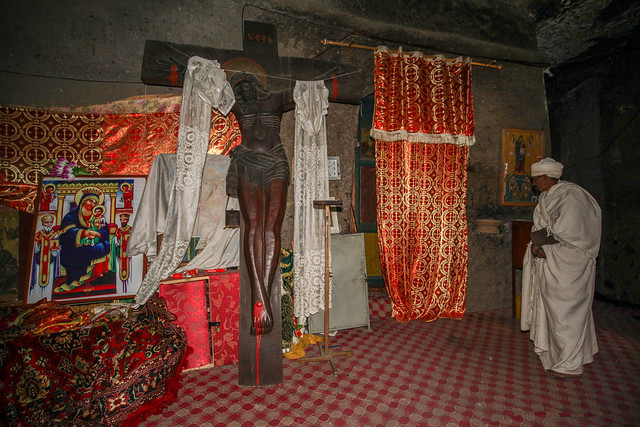 9: This life-size hand-carved crucifix was covered when we arrived, but the priest was nice enough to give us a peak. Between the priest and the crucifix is the curtain that conceals the holy of holies, where a replica of the Ark of the Covenant is kept. 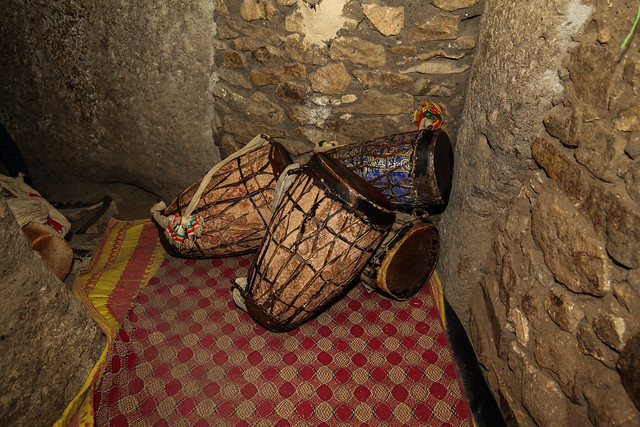 10: Every church or monastery I have visited in Ethiopia has a set of Kebero drums such as these examples. The drums are used at ceremonies and other important religious events. They are made from animal skin stretched over a wooden body. They are worn slung over the shoulder, and have both a large surface and small surface that can be beat upon with either hand. For me, the drums offer a distinct African flavor to their sect of Christianity.