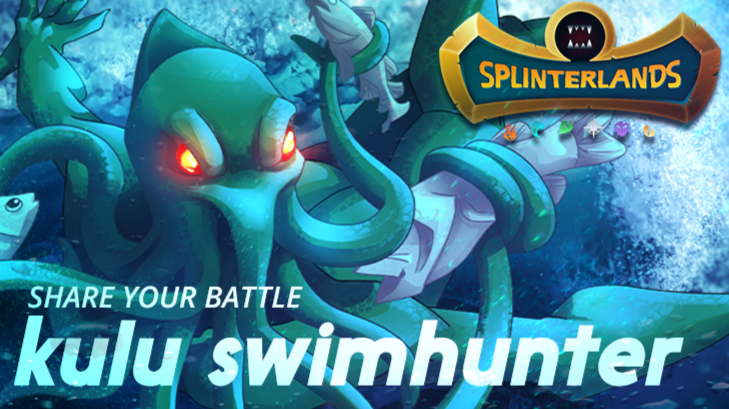 Every week there is a Splinterlands challenge to share a battle using a specific card and on this week's post it is the Kulu Swimhunter card. I also encourage Splinterlands players to partake in the challenge because you get to try different strategies and earn some crypto in the process. Kulu Swimhunter is a water splinter card that costs 4 mana. It has zero abilities but makes up for it in its stats. Overall, it is not a bad damage dealer. It becomes stronger, tanky, and faster as it levels up.

I do not use this card much but I can see it being used in many of the new player's decks because it is part of the starter pack. At level 1, it already has 2 damage and decent health so it's among the stronger offensive monsters they can pick from. In my case, it's not leveled up so I prefer some of the other water monsters I have available. I can see it being more useful when you have the ruleset where you can't use abilities or when you can't use neutral monsters.

The ruleset this time is taking sides. This ruleset means that I can't use neutral monsters and limits my options. I have 27 mana available and I can use all splinter types except for death. The summoner I choose to use this time is Lir Deepswimmer. I like Lir due to his +2 armor, blind, and return fire ability. If you mix up your lineup correctly, then I can counter all types of damage (ranged, melee, and magic) to an extent.

Most of my plan can be found above but I like to mix in void magic to cover all bases. The blind will help with any melee or ranged monsters and the return fire works extremely well against ranged monsters. After that is just damage dealers and a healer for my tank. I built the table above using this tool in case you wanted to use it as well.

At the first glance of my opponent's lineup, I think I have this fight won. Torhilo will tank most of the magic damage and I have 6 shield so it won't take damage for a few turns. Given my damage output, I should be able to make quick work of the rest of his lineup once his tank goes down. I didn't manage to kill off any mosnters but I was able to lower down his tank to 1 health. Given my ice pixie is going before that card can self-heal, I should be able to take it out and start working on the rest of his lineup. I lost my pirate acher but I took out his front two cards. If I don't miss, I should be able to wipe out 3 cards and this match is pretty much over. If this happens, my opponent won't be able to outdamage my cards. My blind hasn't been working at all this fight but I should have this fight won. Looking at my opponent's line up and how his first card has low speed, I don't think I will miss. So I will fast forward to when things make a change.

Now that I wiped out his magic monster, I can say this match is over and it will be my win because I have a healer.

With this, the match is over and I won. I like the combination of void magic with Lir because I am at least somewhat prepared for a magic build.

The battle this time around went exactly as I expected. Torhilo works well in front with the extra shield and void magic ability. The rest of my lineup was just support or dealing damage. The only thing that I didn't like was how slow my monsters were. The only plus side was that my opponent was also slow and he didn't have many monsters that could attack at once. From what I see, I don't think I like Kulu that much as a card. It's fairly slow at level 1 and it has no extra abilities to make it more worthwhile to use.

Lir Deepswimmer is an amazing summoner and when matched with the right abilities, it becomes quite hard to kill. It's a bit unfortunate that my opponent did not use any ranged monsters but he did use magic. By placing a card that counters magic monsters in front, I was able to soak up a lot of the damage I received. I think my opponent's choice of strategy was fairly good. If my damage output wasn't high enough to take out his tank, I have no doubt that it would have been a hard match.

What did you think of my match? Was there anything you would have done differently? I think it is quite interesting to see how different players use the same card.