Is Neo (NEO) a Good Investment? In-depth Analysis and Near to Longer-Term Expectations 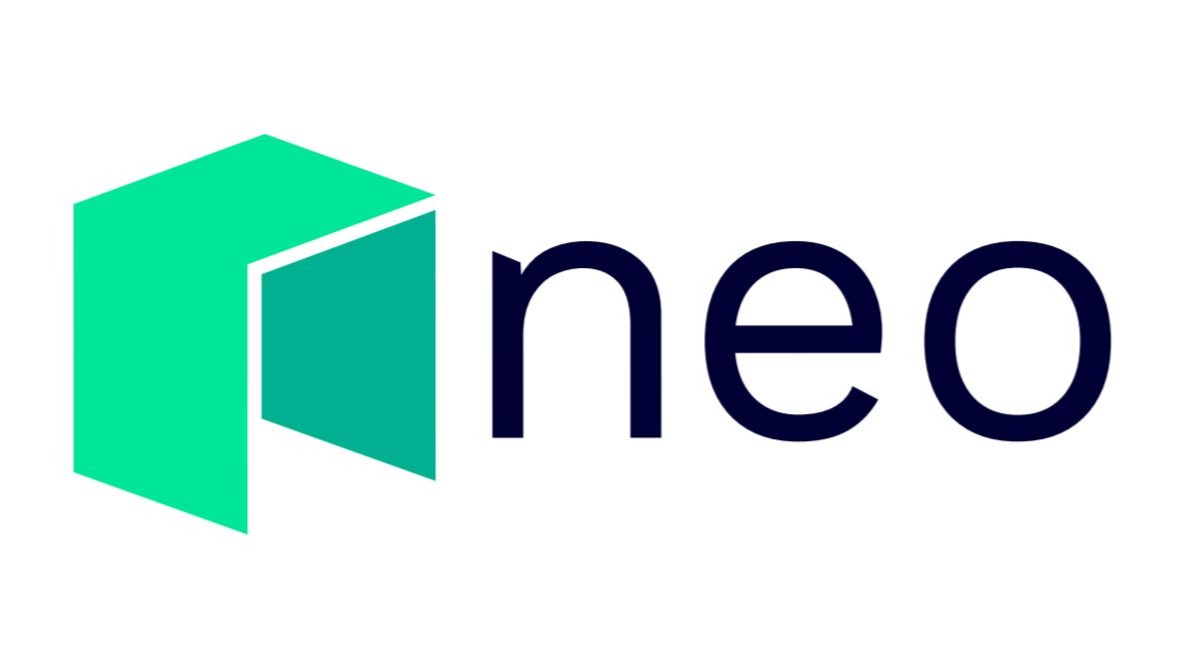 Is Neo (NEO) a Good Investment? In-depth Analysis and Near to Longer-Term Expectations

Blockchain technology extends far beyond digital currencies and store of value use cases, there’s no question about that.

Bitcoin maximalists may beg to differ, but there’s no denying there are other cryptocurrency projects building new and innovative technology that can revolutionize the way individuals, enterprises, and governments do business.

Some of the most influential cryptocurrencies are those that leverage blockchain technology combined with smart contracts, unique consensus algorithms, virtual machines, governance mechanisms, oracles, identity protocols, and more.

By leveraging the intrinsic advantages of blockchain technology and integrating it with these innovative new protocols and technologies, cryptocurrencies have the power to revolutionize and disrupt many existing business models in various industries.

I’m serious and I don’t say this lightly.

Even China’s President Xi Jinping has declared blockchain technology “an important breakthrough” and is making the development and implementation of this technology a priority across the nation.

It still remains unclear which cryptocurrency and smart contract/dapp development platform will come out on top, but if there’s one thing for sure, it’s that there are multiple viable contenders.

Thus far, Ethereum (ETH) appears to be dominating this arena as it is the second most popular cryptocurrency.

ETH has well over 100 members in the Ethereum Enterprise Alliance (EEA), is dominating the Decentralized Finance (DeFi) space, and has an expansive ecosystem of developers, projects, dapps, and more.

However, there won’t be just one smart contract and dapp development platform that succeeds, there’s definitely room for more.

Just think about it, there are always multiple successors in every industry.

The point is, it’s highly likely we will have multiple winners in the blockchain arena.

And while Ethereum currently leads the way, one of its greatest contenders is Neo (NEO) – an open-source blockchain network for the smart economy.

Both Neo and Ethereum are very similar projects with similar goals and ambitions. In fact, Neo is often referred to as the “Chinese Ethereum” since the project was started in China and is primarily built by Chinese developers. 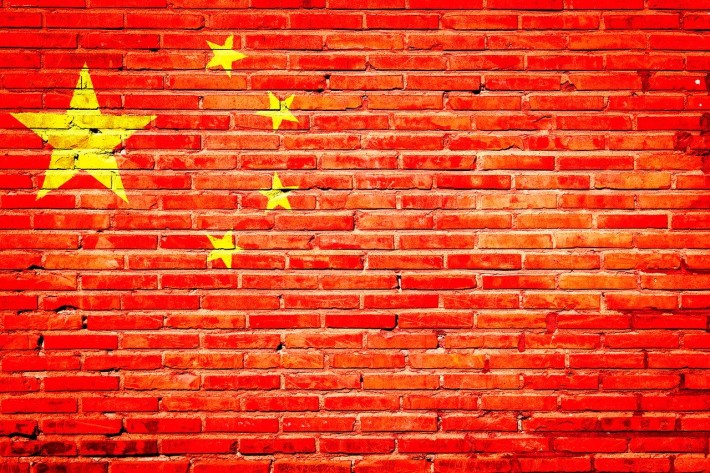 This may give Neo a leg up in the blockchain race as China is now endorsing blockchain technology and establishing themselves as leaders in the space.

Now, for the remainder of this article, we’ll take a deep dive into Neo (NEO). We’ll look at its price action, it’s level of adoption, development, unique features, and the risks and challenges it faces.

By the time you’re done the reading, you’ll have a fundamental understanding of whether or not Neo (NEO) is a good investment.

“Neo is an open-source, community-driven platform that is leveraging the intrinsic advantages of blockchain technology to realize the optimized digital world of the future.” – Neo.org

Neo (NEO), which was originally called “AntShares”, is a Chinese cryptocurrency project founded by Da Hongfei in 2014. It wasn’t until 2017 that Neo rebranded from AntShares to Neo and garnered widespread popularity in the cryptocurrency space.

It was the first cryptocurrency project to come out of China and it is a direct competitor with Ethereum as they are both decentralized blockchain-based platforms that enable developers to build and deploy smart contracts and decentralized applications (dapps).

The purpose/aim of Neo is to build an open-source and distributed network-based smart economy system. It intends on doing this by automating the management of digital assets through the use of smart contracts, dapps, and other innovative technology.

Neo aims to be a developer-friendly platform by supporting mainstream programming languages such as C#, Python, Java, JavaScript, (JS/TS), and Go. Neo also supports a global dapp ecosystem by providing developers with a suite of comprehensive tools and resources to help build Neo’s vision of a smart economy.

All in all, Neo is a major cryptocurrency project with an expansive ecosystem and a growing community of supporters and developers.

In Neo’s case, the project held its ICO on September 30, 2016 (2 years after the project was initialized).

During the ICO, 50 million NEO (50 percent of the total supply) was sold to early investors. The remaining 50 million NEO was locked into a smart contract where each year, 15 million NEO tokens are unlocked and allocated to Neo’s development team.

Therefore, the total and maximum supply of NEO is 100 million and all of the 50 million locked tokens are now unlocked as it is the year 2020.

All in all, NEO’s distribution isn’t overly fair as early retail investors only received 50 percent of the supply, while the remaining 50 percent was allocated to the NEO foundation and development funds.

However, some of these funds have since been redistributed to retail investors on the open market and therefore NEO should be more distributed than the initial 50:50.

Overall, nearly every “newer” cryptocurrency suffers from distribution centralization issues and NEO is no different. However, if NEO’s investment arms and development teams use their NEO funds responsibly, this method of distribution could benefit the project immensely.

Now that we have an understanding of what NEO is and how it was launched and distributed, what kind of unique features and technology is it attempting to implement so that it can bring its vision to life?

See the unique and innovative technologies and features Neo will be implementing in NEO 3.0 below:

dBFT2.0
Neo’s consensus algorithm is known as Delegated Byzantine Fault Tolerance 2.0 or dBFT2.0 which is an innovative protocol with high stability, high transactions per second (TPS) and single block finality.

NeoFS
NeoFS is a distributed object storage solution for on-chain data applications that aims to support the shift away from third-party storage providers and put users in complete control of their data.

Dual Token
Unlike Ethereum, Neo’s total supply will not increase as the network grows because it has implemented an innovative dual token economic model that optimizes on-chain governance and utility.

Oracle
Neo features a built-in oracle component that enables smart contracts to access external resources. Reliable oracles are necessary for bringing smart contracts to the real-world and Neo is attempting to solve the infamous “oracle problem”.

All of the above features will be included in NEO 3.0 – the new and optimized version of Neo’s new blockchain network which is launching in 2020.

“The cornerstone of our efforts is NEO 3.0, which will be a robust blockchain implementation with high throughput, enhanced stability and security, an optimized smart contract system, and a feature-packed infrastructure set for diverse business application scenarios.” – Neo.org

So, we now have a pretty good understanding of Neo’s fundamentals. We understand Neo’s token distribution and allocation. We know what Neo is aiming to accomplish and we know that NEO has some major upgrades ahead in 2020.

That being said, from a fundamental standpoint, I would say Neo is looking like a pretty good investment right now.

However, we must look at the other side of things (price analysis) if we’re going to make an informed decision on whether or not Neo is a good investment.

The first thing we must look for when analyzing the price of a cryptocurrency or any asset for that matter is whether or not the underlying asset is building or holding above a solid market structure.

If an asset has not yet built a solid market structure or has broken its market structure, then it shows signs of weakness and would not be considered a good investment.

Let’s see if Neo (NEO) has a solid market structure and is holding above it. 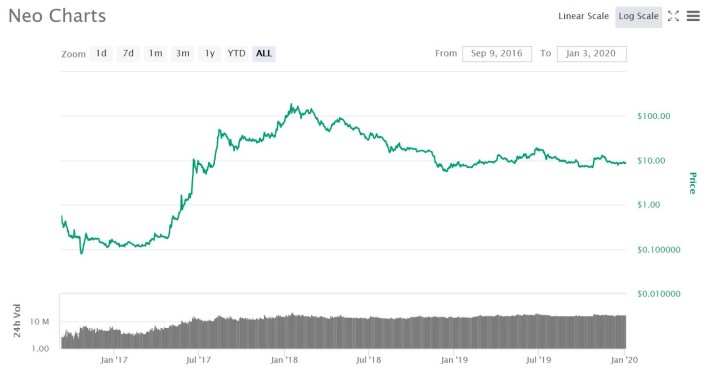 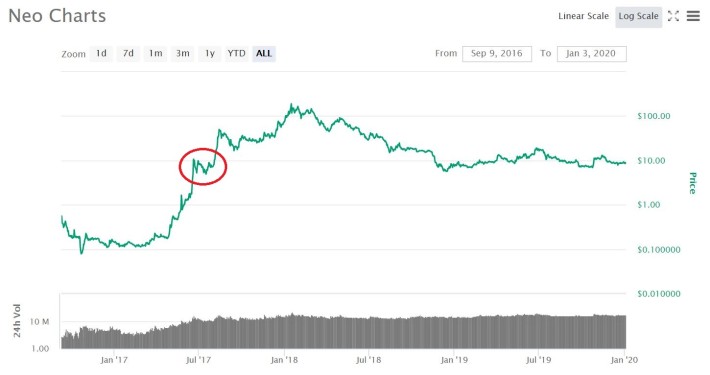 The price then consolidated here for a couple of months before making a new high 1 month later. Then, roughly 4 months later Neo reached an all-time high (ATH) of $189.44 on January 15, 2018.

Then, along with the rest of the cryptocurrency market, Neo cascaded down and eventually found a low of $5.64 on December 15, 2018. The price then rebounded somewhat and consolidated around the $10.00 range for many months (8 months and counting!).

This ~$10.00 region is the most important price level for Neo as it represents Neo’s extremely strong level of market structure. 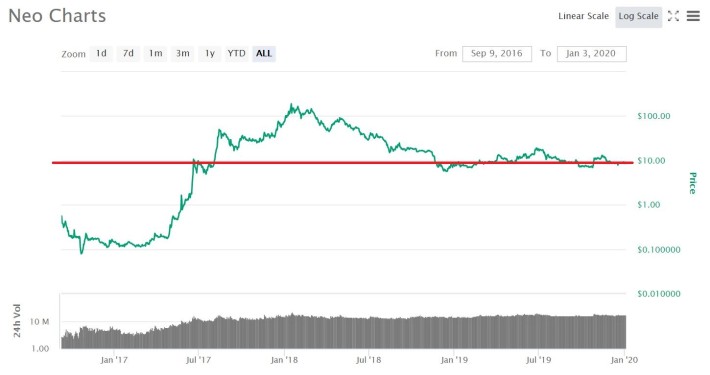 As seen from the price chart above, Neo has built and is maintaining above an extremely important market structure level of around $10.00. This shows strength and resilience in the asset and as long as Neo holds above this level, I would say it is a good investment.

While Neo has a lot going for it from both a fundamental and a technical analysis standpoint, it still has various risks and challenges to overcome if it’s going to be successful.

Perhaps the biggest challenge for Neo is to compete with and steal market share from Ethereum.

Ethereum has already established itself as the leading smart contract and dapp development platform and has garnered a large and loyal user base. Therefore, it may be difficult for investors to see value in Neo if its Ethereum competitor continues to dominate the blockchain space.

If the government decides to support and fund its own blockchain ventures while at the same time stifle support for Neo, Neo would be severely impacted negatively.

All in all, regardless of these risks and challenges, they are nothing that Neo couldn’t overcome. Cryptocurrencies suffer from various risks and challenges all of the time, but if they manage to persevere, keep building, and work towards their vision, crypto investors see the value in that.

Cryptocurrency and blockchain technology is a trend that’s just getting started and Neo (NEO) is one crypto asset that stands to gain immensely.

China has just recently declared blockchain technology “an important breakthrough” and is making the development of this technology a priority for the nation. This could potentially impact the price of Neo quite positively as Neo is the first cryptocurrency project to come out of China.

Not only that, but Neo will soon be transitioning to NEO 3.0 – a major blockchain upgrade that will optimize and enhance Neo in every way.

Even more, Neo’s price action is looking extremely solid as it has built a very strong level of market support and is holding above it nicely.

All in all, Neo is positioned very nicely in the blockchain race and is poised to perform very nicely both from a fundamental and price standpoint.

That being said, I would say Neo (NEO) is a really good investment right now.

What do you think about Neo (NEO)? Do you think it’s a good investment? Why or why not? Let me know in the comment section below. 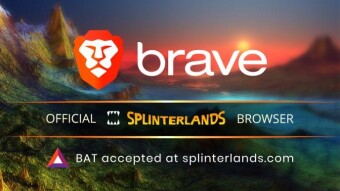 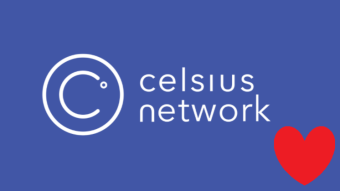 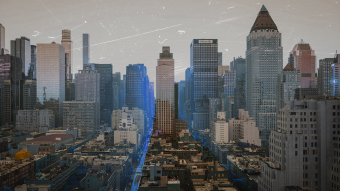