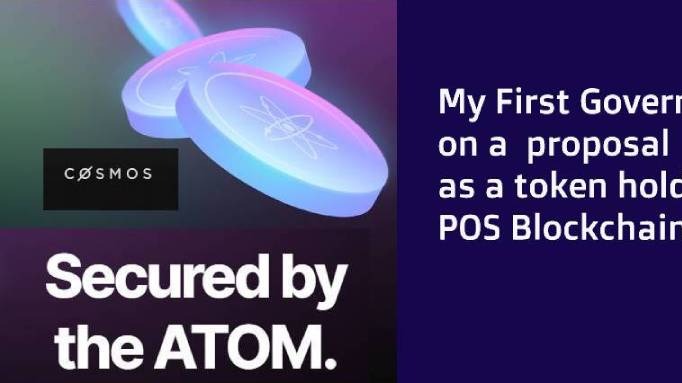 Day before yesterday, for the first time I voted on a Cosmos related Governance proposal, meaning as part of the Cosmos community who has staked Atom, I made use of the opportunity to participate in voting on proposals that determine the direction any Cosmos Blockchain projects would take.

The matter to vote on was very interesting, it was a proposal asking approval from the Cosmos Hub Community to migrate Gravity Dex from Cosmos Hub to a separate Cosmos Chain. 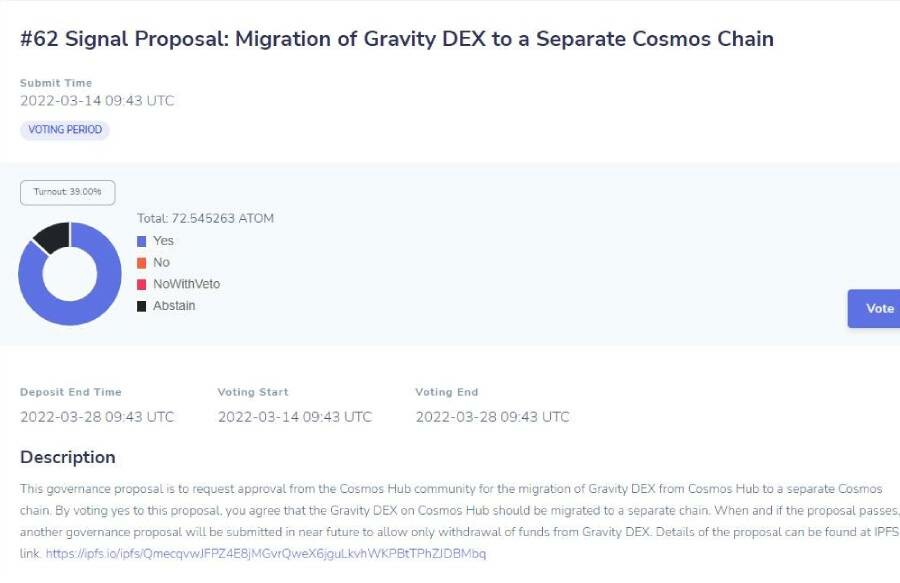 Gravity Dex is the DEFI DEX within the Cosmos HUB having liquidity modules with AMM functionality.

I really agreed with the proposal that Gravity Dex should sun set on Comos HUB to arise as a much improved DEFI Dex as a separate Cosmos Chain. 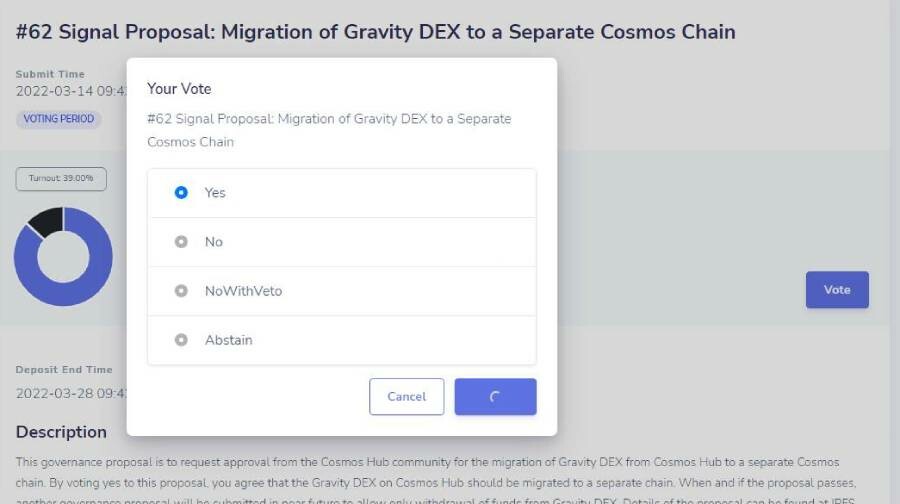 Cosmos Hub’s stance of maintaining “Credible Neutrality”, all Dapps within it should get same preference without “bias”


Infact, I loved the principle of “Credible Neutrality'' that echoed in the proposal, which means that Cosmos Hub would be neutral and treat all Dapp projects building within it equally.

Since Gravity Dex is within the Cosmos Hub, it appears the community felt that the Cosmos team has a favourite pet DEFI project that the team would give special preference to.

However, when Gravity Dex moves out and develops as a separate Cosmos Chain, there will be no reason for Cosmos to have any entitlement towards Gravity Dex and this Dex in its new avatar will be treated like other DEFI Dexs in the Cosmos ecosystem.

This will have Cosmos Hub maintain it’s stance of “Credible Neutrality''.

A big thumbs up to this principle because a Blockchain should be a space where all Dapp platforms get the same treatment without bias. I feel this is needed for decentralisation and the growth of a Blockchain’s ecosystem that is aspiring to thrive with innovative Dapps.

Another major issue with Gravity Dex was that it cannot have a token of its own like Dexs like Osmosis have if it continued to reside in the Cosmos Hub.

This is because to have a token of its own, Gravity Dex should become a separate Cosmos Chain. A DEX inside the Cosmos Hub can only use the native token of Cosmos Hub which is Atom for purposes such as providing incentives to Liquidity providers.

The Cosmos community had issues about Gravity Dex using Atom inflation for the purposes of incentivizing the Dex’s liquidity providers with LP rewards as this will reduce staking rewards of the Cosmos community.

Therefore, when Gravity Dex is on a separate chain this issue would not be there, as the Dex will have its own token which will be air dropped to Atom stakers. The Dex will be free to decide on its own tokenomics which holds a more exciting future for the Dex.

You can go through the proposal document which explains the reasoning behind the suggestion of migrating Gravity Dex from Cosmos Hub to a separate Cosmos Chain.

I am sure, this move will also resolve a contentious matter as Cosmos Community have been having conflicts because of Gravity Dex. Everyone feared that Gravity Dex would hinder the development of other Dexs in the Cosmos Ecosystem but the matter is now resolved.

Launch of Crescent on April, the renovated platform of Gravity Dex 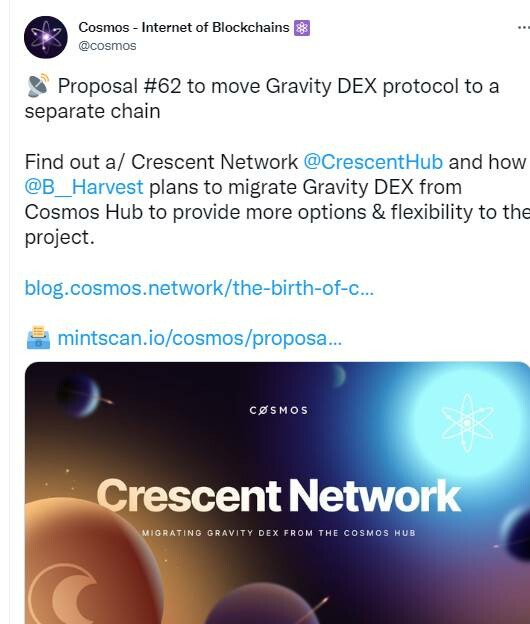 This proposal will most likely be approved with the majority of the Cosmos Community agreeing with the merits of Gravity Dex sun setting in Cosmos Hub to arise as a more improved and interesting Dex in another form.

Gravity Dex’s team B-Harvest have rebranded Gravity Dex to Crescent. Crescent is already being promoted in their twitter channel, the talk is that it would be a much more advanced Dex than Gravity Dex with more features and improvements. 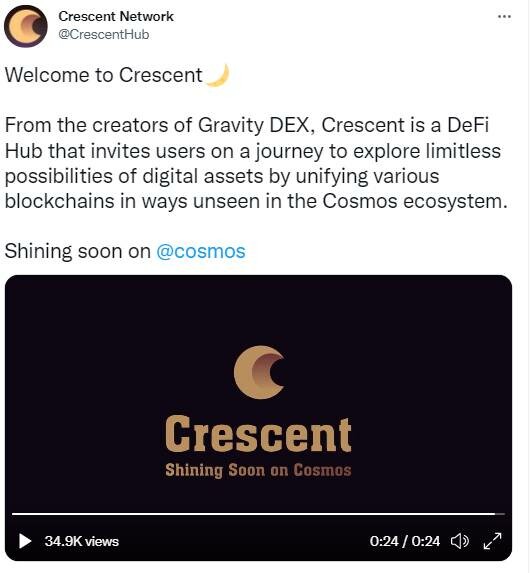 I really liked the promo of Crescent with a virtual cat being the brand ambassador for Crescent, check this fun promo out here posted on tweeter…

Crescent has the backing of the Ignite team, which was Tendermint earlier, the entity that created the Cosmos Blockchain, so that’s big. Looking forward to checking out Crescent when it launches on April 14th.