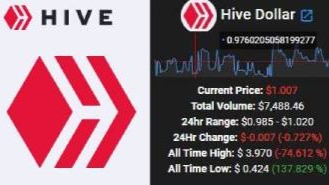 HBD, the home decentralised stablecoin of Hivers, is on the way to acquire more esteem & value!!

Visit of the cuddle kitten signaled that it's time for another cat post!! 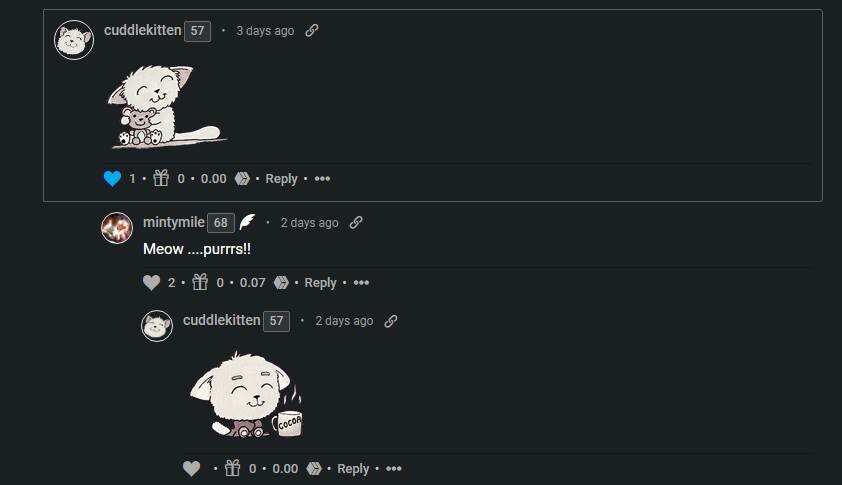 When ever, cuddle kitten visits one of my mom’s non-cat blogs on Hive, she feels the time has come for a cat post, so I am here, newly branded as BtcSolarCat now from the earlier version of me being the ‘Bitcoin cat with a heart of Bitcoin’ (how touching!! , all this goodness of my nature certificate😍. Anyway) 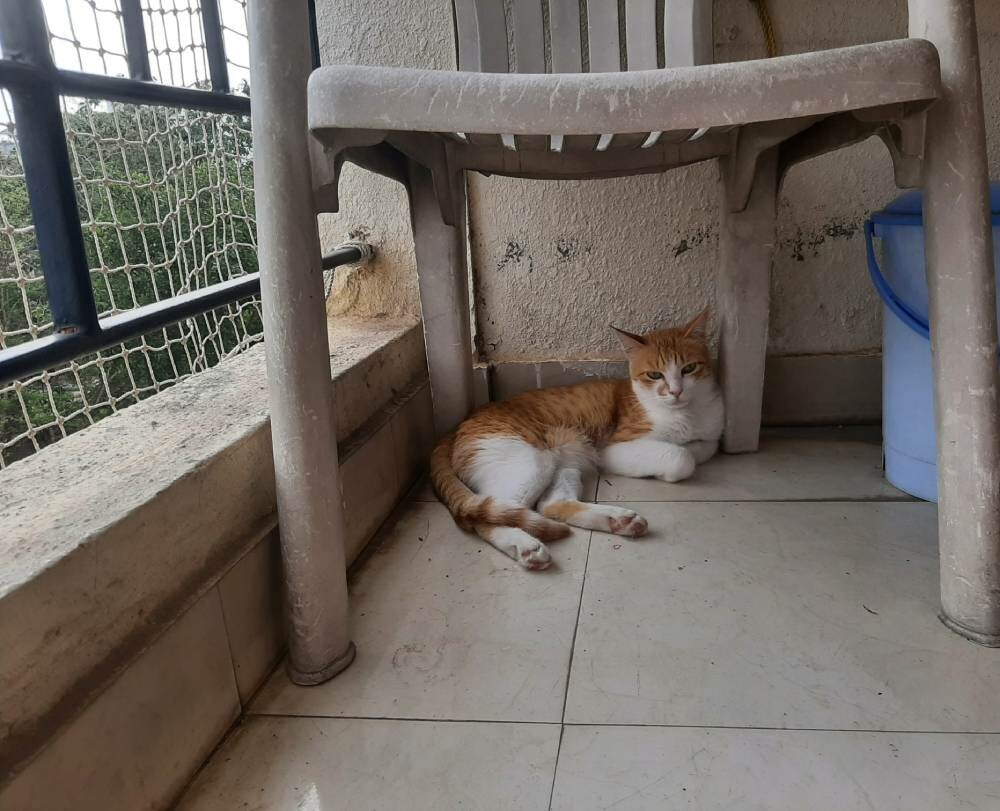 Hivecat Garu on a Hive asset that’s a rival to CBDC - Guess it!!

I am no maximalist Bitcoin cat though, and thank God for that, else I will be a pompous cat that appears to be arrogantly marketing Bitcoin…nah… I am a hive cat as well and this has saved me from becoming a Bitcoin maximalist, and be a more open minded crypto cat having bonds of belonging to the Hive Blockchain. 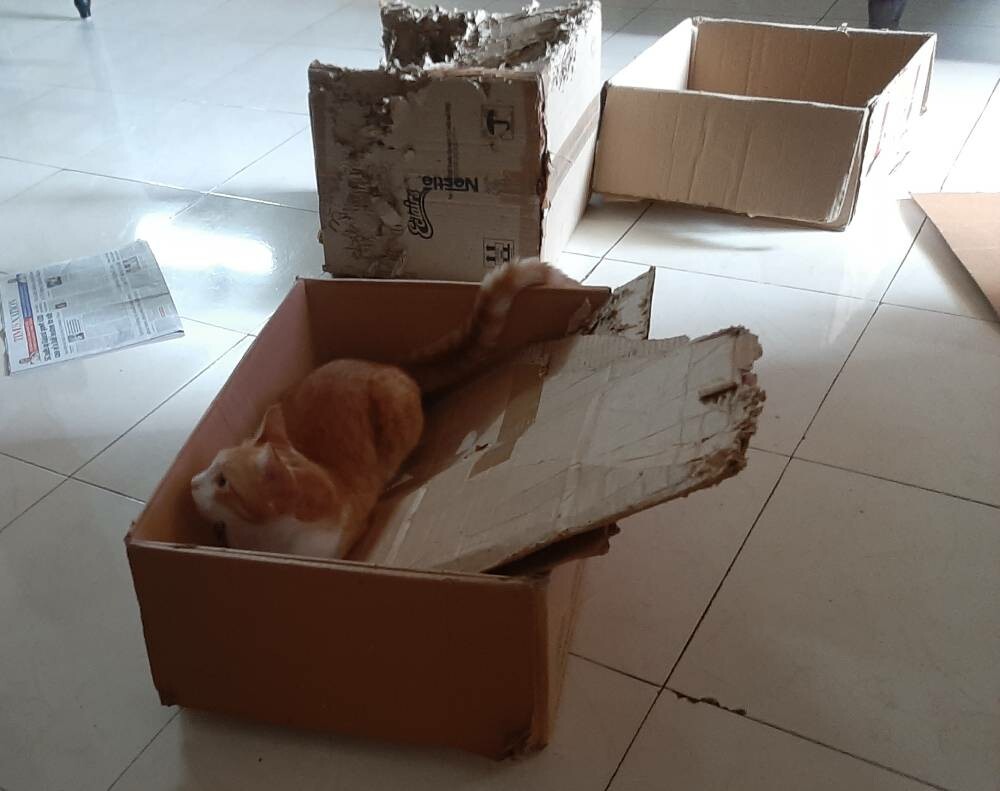 So, it’s time for me, Hive BtcSolarCat, Garu to talk about a unique value proposition that Hive Blockchain bestows to its users. (Sorry, my mom, reading fairy tales so got carried away with the language there)... Yes, it’s about Hive’s stablecoin HBD!! 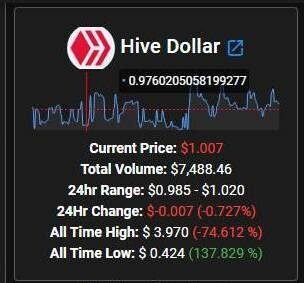 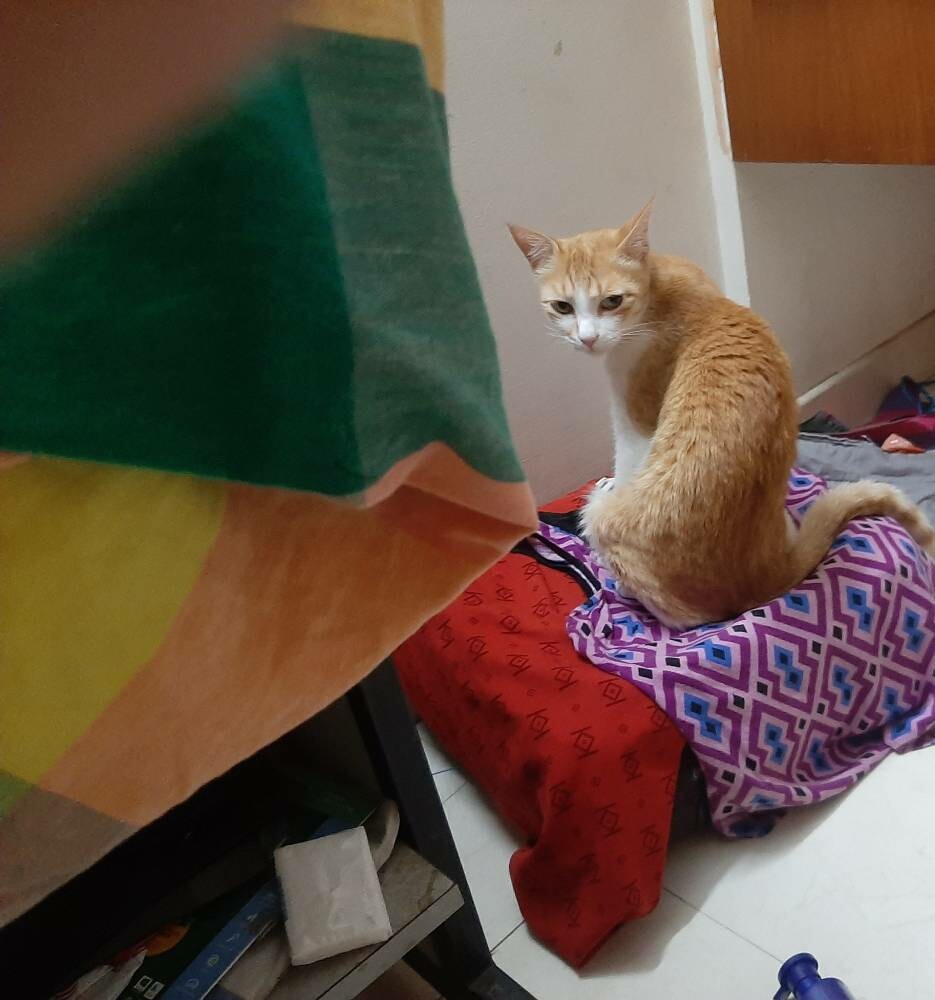 Sure, terraUSD is making news everywhere that it’s the third largest stablecoin after USDT and USDC and the number one decentralised stablecoin out there that Defi people use in Blockchain but HBD although no way that popular is also a decentralised algorithmic stable coin.

HBD’s value is brought about not by collateralising USD dollars, it’s got from exchanging with HIVE to maintain its peg, it’s similar to Luna’s terraUSD where peg is maintained by exchanging terraUSD with Luna.

Ofcourse, I am not all that familiar with this, thanks to my Mom who has been concentrating on Luna’s terraUSD more than Hive’s HBD, silly she is, and can’t help that it canotates with lessons from romantic movies, where the guy has his kind of girl next door but is blind to it and goes after the wrong woman somewhere else. 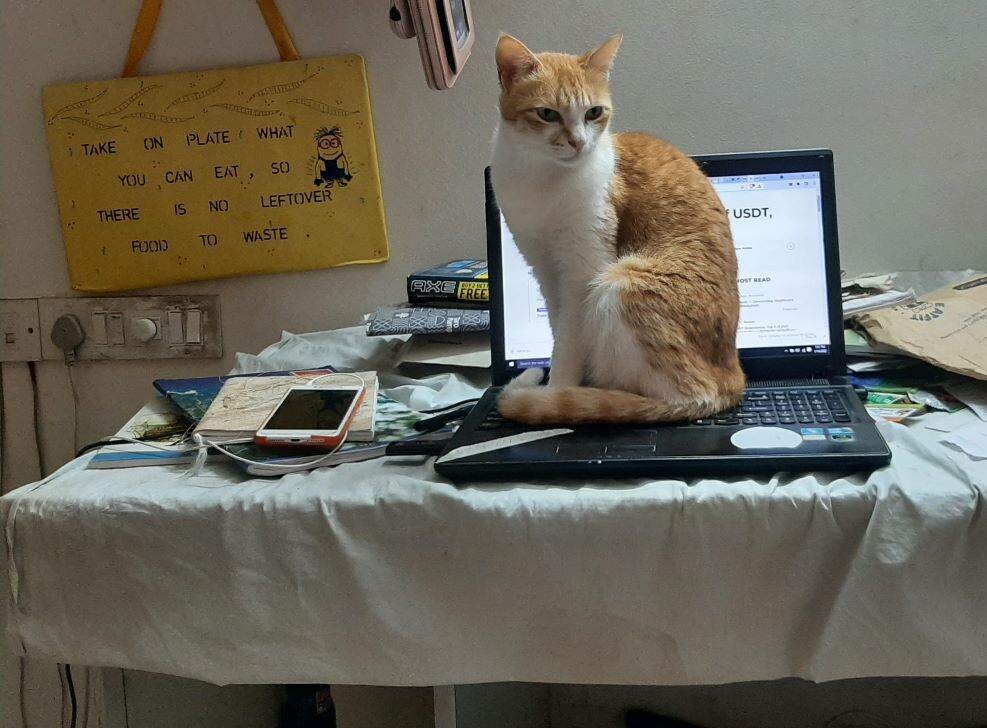 So, forgive me readers if I am in any way wrong about how HBD maintains its peg, my Mom thinks it’s this way, like Luna’s terraUSD does. I hope I don’t become less of an eligible Hive cat because I am not all that cl .ar about the HBD details, I will nag my Mom to read about it thoroughly. Details about HBD are here.

As of late, there is strong hodling of HBD by Hivers!!

However, the point here is that HBD is a decentralised algorithmic stablecoin, like Luna’s terraUSD is!! 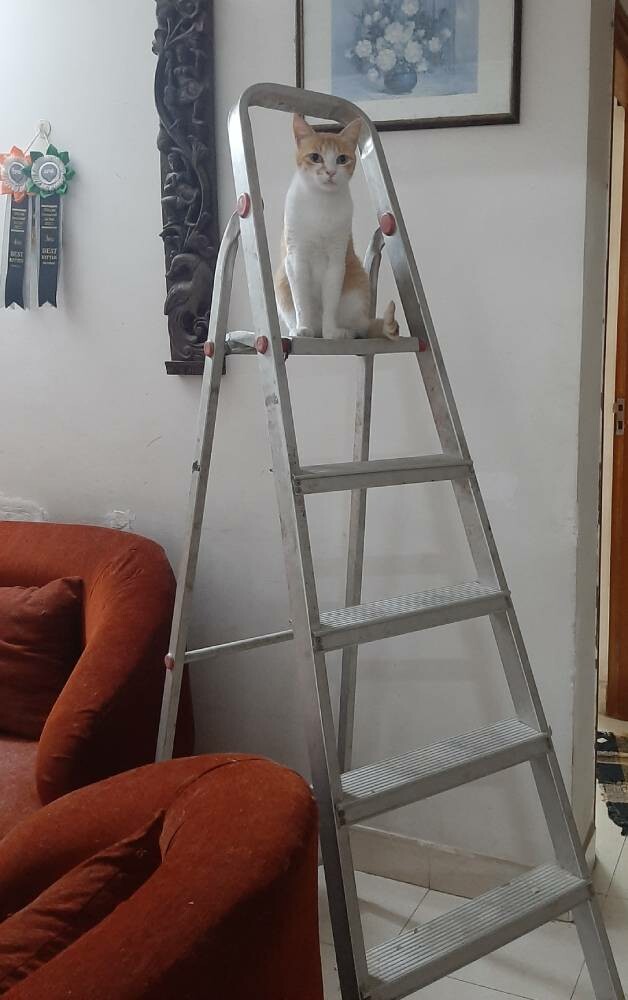 (Now, can I play a romantic song in the middle since I talked about romantic movie theme…ah I think I have to brush that idea up since my Mom’s not listening to all that stuff, she’s just into crypto and fairytail stories without the human romance stuff now!!)

Ever since terraUSD is making news after news, Hive witnesses must have been contemplating strategies to make the HBD stablecoin more prominent and eventually they have introduced measures with sound strategies on making HBD a more well known decentralised stablecoin. The result of those measures is visible when you check the Hive-HBD market.

There is less selling of HBD to acquire Hive and more selling of Hive to acquire HBD, which is why I think the green graph is short, it appears that there are not many sellers of HBD as compared to buyers. 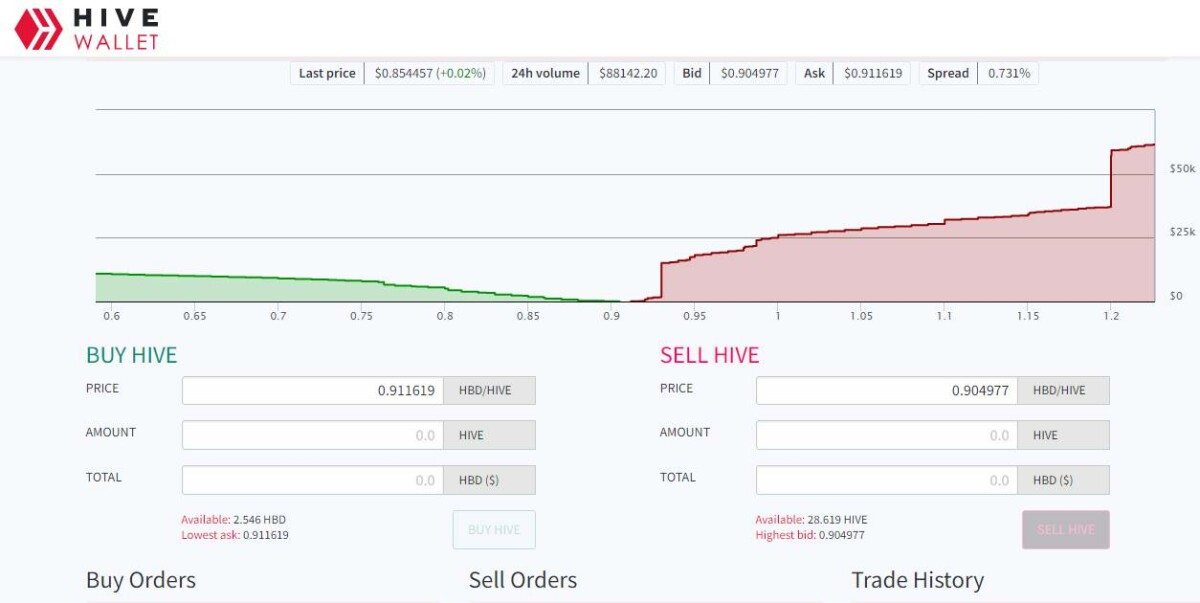 This was HDB-Hive market two days ago, HBD sales were really low that time, now it's become much better. 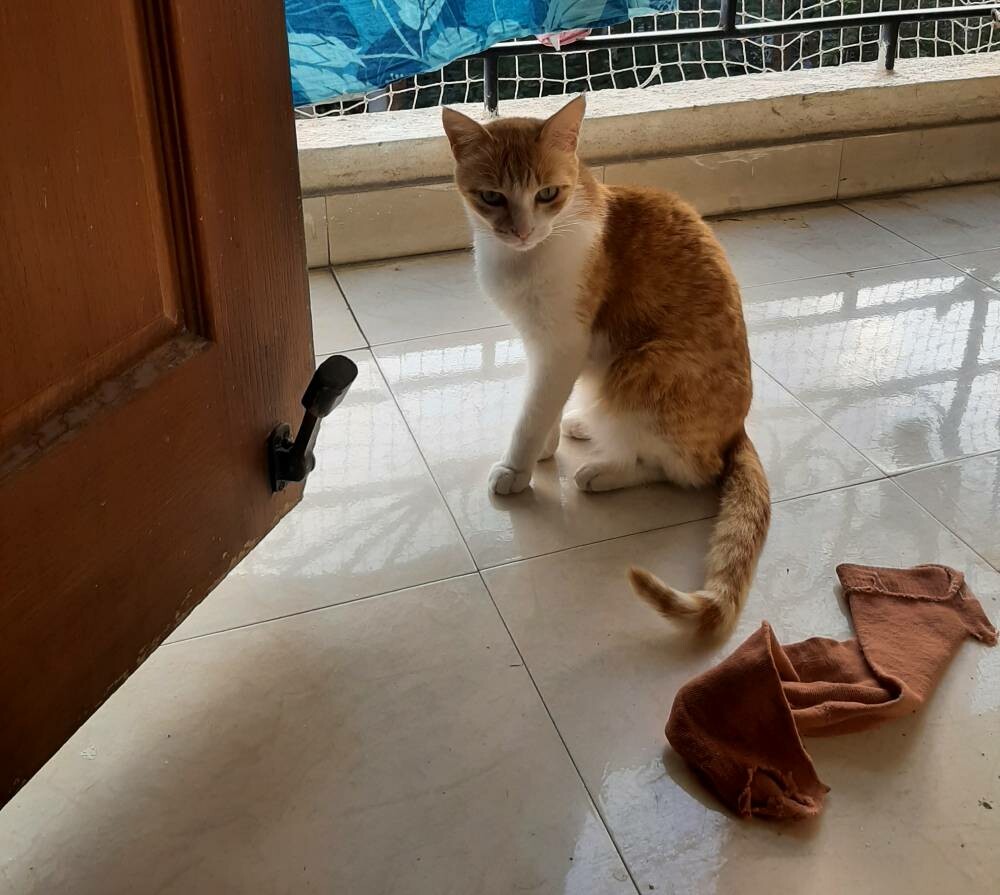 So, are you guys wondering about the measures that has created this phenomenon that people want to Hodl onto HBD and not sell it, that too suddenly because my Mom is sure the graph was not like this earlier with the green graph having more depth, with normal selling of HBD happening for Hive.

Steps taken in Hive that HBD is now very coveted there

All Hivers, will be aware of it but here let me break it for those unaware, if there are any.

HBD’s interest when moved to Hive savings account interest has been hiked to 20%. Yes, notice the number is made more than the interest one can earn by depositing their terraUSD into anchor protocol, which is 18 to 19%.

And this is not all… there is something more😃 … yes, DEFI stuff with LeoFinance team having made arrangements to have a pHBD-USDC liquidity pair in PolyCub finance, the yield aggregator protocol that the LeoFinance team built in Polygon, which was launched recently. 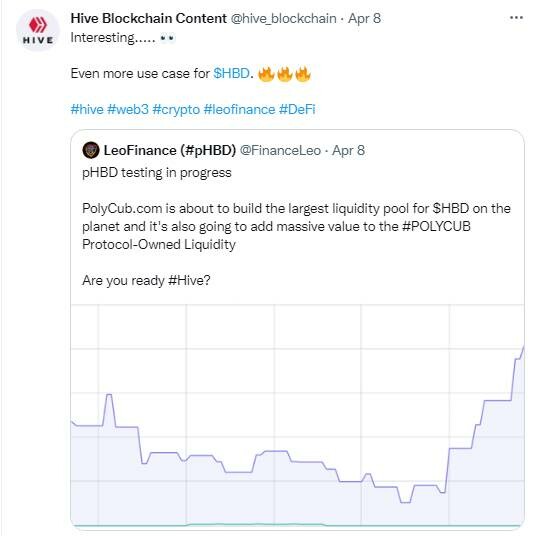 The mission of introducing this liquidity pool is to increase liquidity of HBD, so that it is around in enough numbers to be purchased by swapping USDC in Polycub for the Hive community and others outside eventually. The milestone Leofinance team is aiming for is a 5$ million liquidity pool. 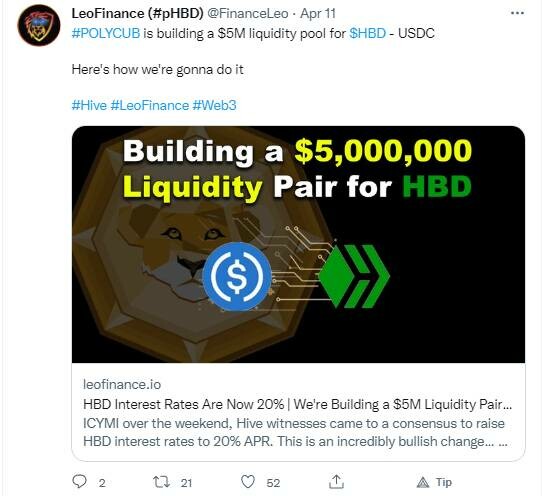 LeoFinance is buzzing since April 8th about this liquidity pool launch.

On April 16th, crypto community had a proposal to vote on the DeBank platform for the introduction of pHBD-USDC pool in
PolyCub. 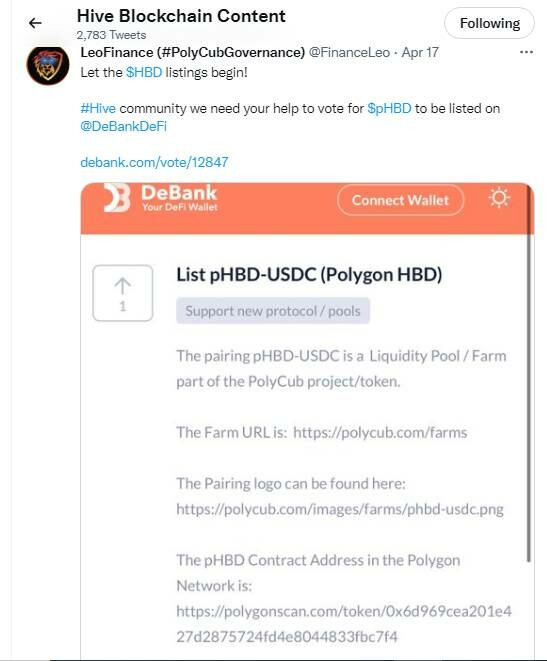 Ofcourse, one can be sure that the majority of the Hive Community voted for this proposal and so pHBD-USDC pool is going to be a reality in PolyCub soon.

More explanation on all this are on Leofinance posts, one being this here. 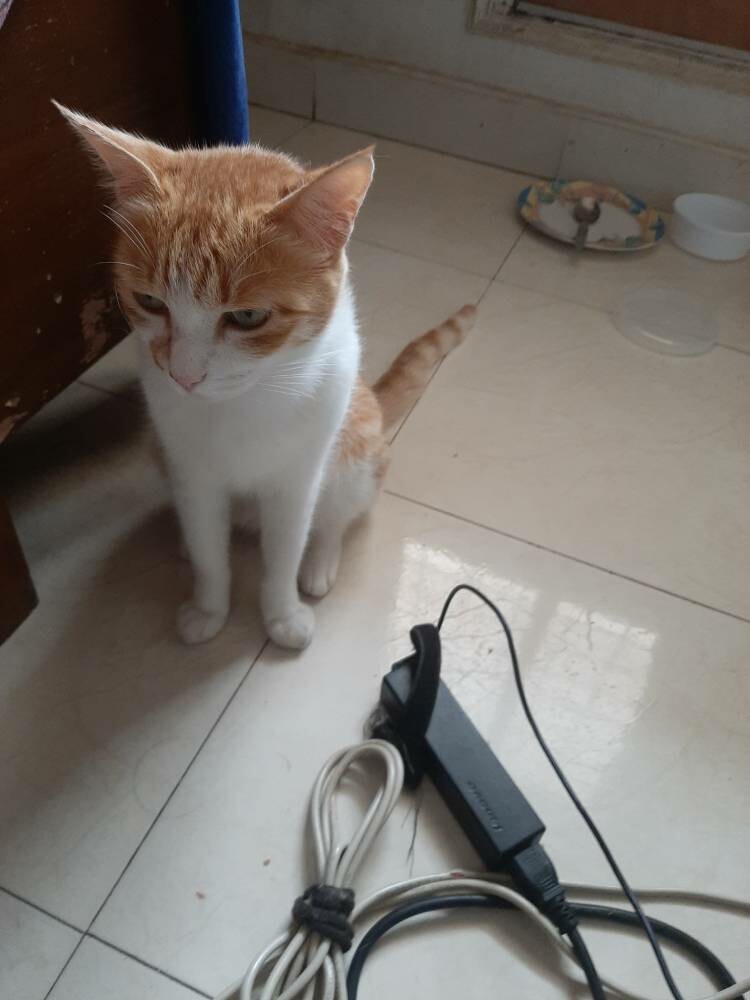 So, that’s why HBD is hot , meaning coveted a lot within the Hive community now!!

Right, it’s time for me to leave, but I will end the post with a song with the girl next door theme, I just heard it on my Mom’s playlist now, it’s called “Living next door to Alice”, by Smokie -

Well…good bye everyone, I have to massage my buddy cat Mochu, he did a fabulous job in an earlier post, arguing and countering an anti-crypto politician, I am proud of him!! 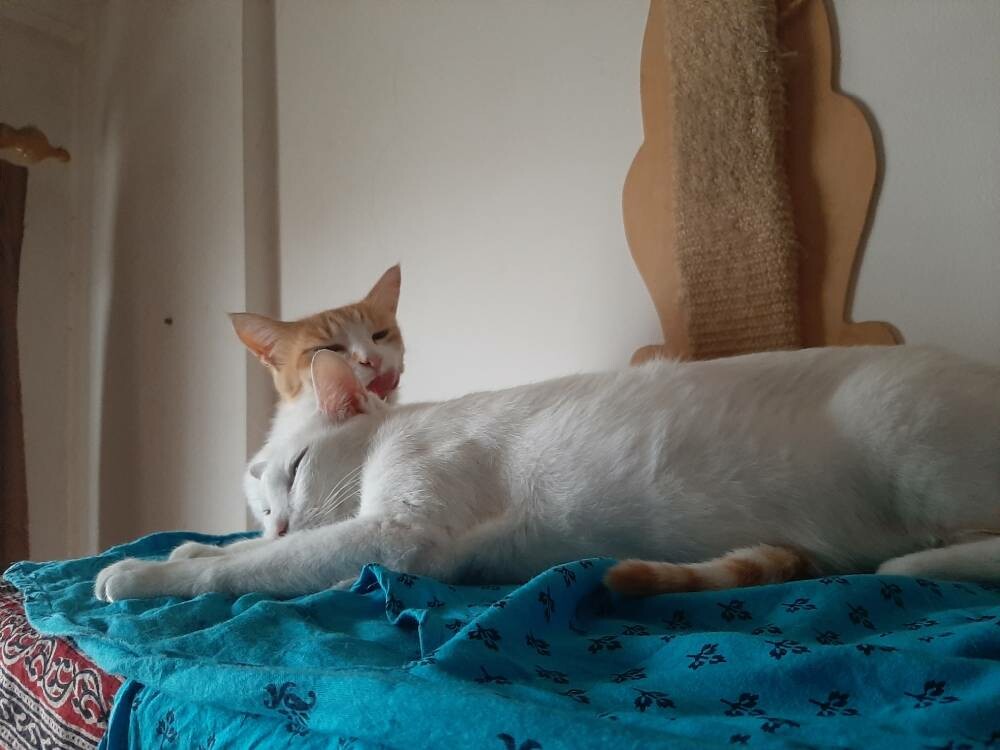