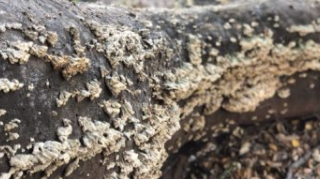 Trametes versicolor aka polyporus versicolor is a member of the polypore  family of mushrooms and in North America and Asia they grow on dead oak and duanwood which is an asian cousin of the American Oak tree family. It has been native american legends that the tribesmen that were hunters would use this mushroom as a tonic in a tea and as natural chewing gum that has been known to help in aid of cancer prevention and cancer immune system treatment (immunotherapy and chemo) and enhancement. This mushroom is one not to forget for people hiking in the winter as you'll tend to find more than one log of them growing along the west coast of United states especially in January of each year. The medicinal value in these mushrooms is like that of reishi aka Ganoderma Lucidum mushroom but compared in flavor in a tea, Turkey Tails tend to be less bitter than reishi. They are packed to the brim with polysaccharides and antioxidants that makes them so healthy on the immune system.

Ice tea recipes while utilizing native and non-native herbs and plants to the Americas.