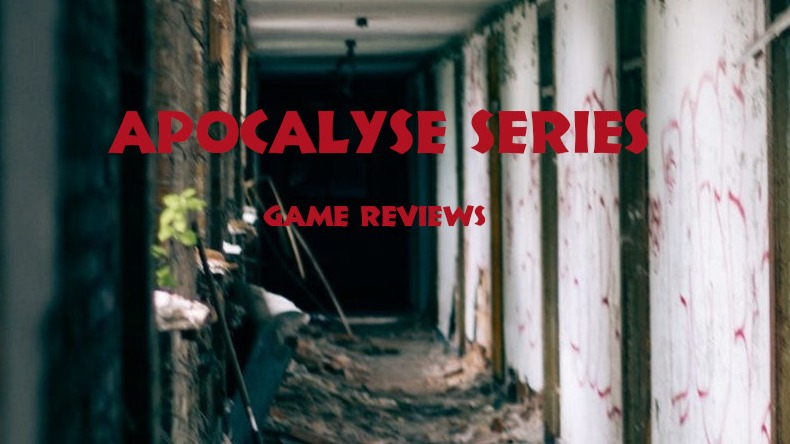 With the current COVID-19 pandemic occurring at the time of this writing, it seemed appropriate to take a look at some games that prominently feature the end of the world as we know it, or at least the post-apocalyptic landscape of the time after. In this installment we'll be looking at Rebuild 3: Gangs of Deadsville released by Northway Games in 2015.

The apocalypse this week is that of the ever popular zombie hordes! The source of the zombie plague this time is a mysterious virus that breaks out in Europe and quickly spreads around the world. The story starts in Seattle 2016, where you are just moving into a new apartment. You get to create your character here by picking a name, gender, appearance, and background job - which impacts your starting set of skills.

The random name generator came up with this, which sounds a bit like a stripper name.

The world quickly descends into chaos as attempts to contain the outbreak fail. We then skip ahead to 2018, where you have joined up with a group of other survivors to try to rebuild civilization. After choosing a name for your first town, and a difficulty setting for the game overall, you transition to the city map, where the majority of the game takes place.

Then again, the random name generator also came up with this for my first town.

This initial town acts as a tutorial to learn the basics of gameplay. Rebuild 3 is essentially a strategy game, where you try to reclaim various cities by completing a certain set of goals for each location. Then, you and a handful of other survivors move on to rebuild the next town.

The main mechanic of the game is for your survivors to gather materials, which can then be used in fortifying buildings, thereby expanding your base of safe buildings. You drag icons, representing these survivors, to locations on the map and choose an action for them to take. The available actions depend upon the area type and what is currently present there.

Time continually ticks away, unless you press the Stop sign to pause the game. The game also pauses if you alt-tab out or there is tutorial information being displayed.

In secured areas you can have survivors guard against zombies; rebuild the area into a different type, e.g., convert a building to a farm; or do an action specific to that area, such as assign a survivor to actively work on a farm, increasing food production. In unsecured areas you can have your survivors scavenge for supplies; kill zombies, if there are any there; claim the area, if you have sufficient material and that area is zombie free; scout an area for survivors or zombies; or interact with survivors, if there are any in that location.

If there are still zombies in a location then it cannot be secured.

The five main resources are food, building material, ammo, medical supplies, and fuel. These can be seen along the left side of the screen, right below a blue bar that tracks the morale of your survivors. Food is what you will likely have the most issues with early on. Each survivor normally eats 1 food per day, and each farm square you own produces a couple of units of food per day.

The number of survivors you can have is also limited by the number of housing-type buildings you have secured. Aside from housing and farms, there are also buildings that help increase morale, increase defense against zombie attacks, or where you can do research.

Zombies will eventually start to form into hordes, which can attack your base. You can send survivors to attack them before they arrive, or place defenders on the border of where they will arrive in your town. If zombies attack an undefended part of your town, it will revert to being unsecured.

Zombie hordes can range in size from the small one, pictured above, to far more dangerous huge groups.

Survivors have one of five different skills: defense, leadership, scavenging, building, and engineering. Defense is used in clearing out zombies or defending the base against zombies. Leadership skills are used in recruiting other survivors. Scavenging helps survivors locate resources and items. Building helps secure areas or convert them to a new structure type.

Engineering lets you perform research if you have secured a specific type of building. Weapons and items can increase skills or give special abilities, like being able to hunt for food in wooded parts of the city. There's not a big difference between the two, but each survivor can only be equipped with one of each.

As in any good zombie game, there is a chainsaw.

Random events will occur, where you may need to make a decision about what to do, which can result in you losing resources, gaining survivors, survivors being injured, or pretty much anything. Eventually you will also encounter other groups, with which you can form alliances or fight. You will have to do one or the other to advance the plot, at a certain point.

This is not a quick game to play, though you can save and pick up the campaign again later. There is a bit of repetition, as you start over in the next city, but there is a plotline that progresses as you complete each city. Plus, each new city tends to have a slightly different set of factions or goals to complete.

The art has an almost cartoonish style to it, which I feel works well to balance the otherwise grim nature of the game world. Sound effects are minimal, but the music is well done and has an appropriate apocalyptic feel it. It is definitely background music, and doesn't really take center stage as much as provide atmosphere when playing.

Overall, I would recommend this title if you like slower strategy games. I tend to give points for it being an independent title as well. As a rating, I would give it a "B", or 7.5/10 stars. It may not be for everyone, and if you are expecting something with squad-based tactical combat, you'll be disappointed.

I would suggest checking out Rebuild and Rebuild 2, as they were done as free browser games. If you enjoy those, then consider paying for Rebuild 3 to support the developer. You can find Rebuild 3 on Steam, GOG, but I'll just link to the developer's page here.