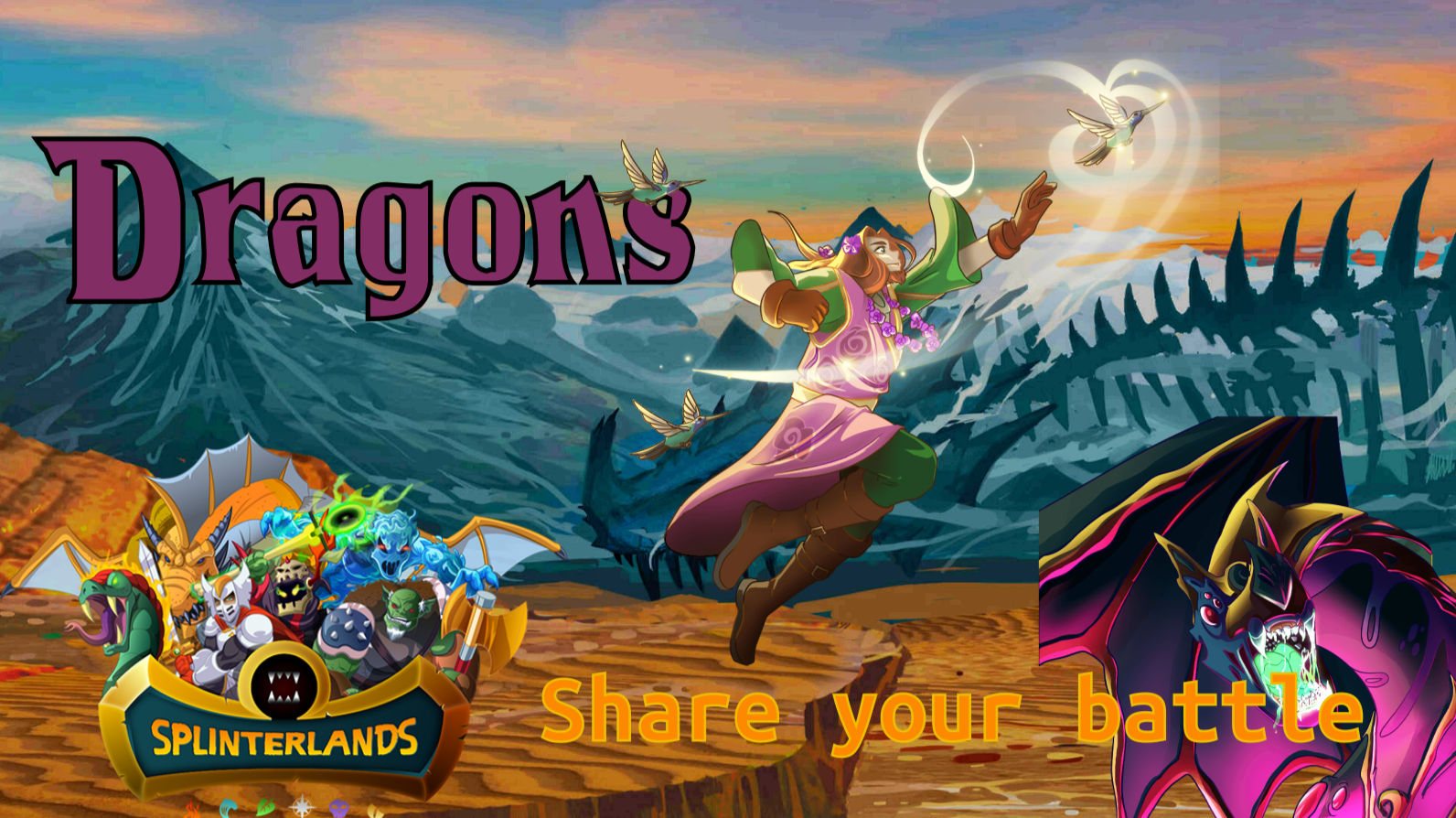 For this weeks entry for the splinterlands share your battle we can enjoy the dragon splinter.

Since the share your battles with the dragon splinters, they have become one of my favorites to use. And as i am spending most of my time in Bronze league, i see the Drake of Arnak on many occasions as this is one of the standard card available to anyone. But after some digging on peakmonsters, i have found a different summoner of the dragon splinter which i think everybody should at least try in their battles.

And for this weeks share your battle we'll look into summoner Brighton Bloom and his pet, the Void Dragon.

Brighton was an eccentric young man of Shimmer City, the capital of Khymeria. He was always seen as a strange character among the Khymian summoners. In the best times, his peers thought he was simply a distraction from their important studies. In the worst times, his fellow summoners doubted and belittled Brighton’s abilities. They were also put off by the way birds always landed on his hands and shoulders. After just two years studying at the Shimmer summoning school, Brighton decided to leave Khymeria. His loyalty was available to the highest bidder, and that is where the Dragons came in.

The Gloridax cared not for Brighton’s strange idiosyncrasies; what mattered to them was his skills as a summoner. Furthermore, in Gloridax eyes oneness with birds has long been considered a sign of divinity. Brighton’s attraction to birds was quickly noticed by Suam Khepri, Empress of the United Gloridax, who assigned a team of aerial sorcerers to properly train the young man. When Brighton emerged from that training, he could grant the power of flight to any monster under his summoning control.

This summoner has 1 ruleset in which he's king, and that's Earthquake. Because he grant's flying to all monsters you won't have to worry about damage done to this ruleset. In this share your battle we will analyse a game using this rule-set.

As Uul waited for the next rift to open and for the assault to begin he grew bored. Reaching for the roiling fumes above, he scooped a generous portion from the sky and toyed with it, morphing the noxious cloud into different shapes. When a fell bat swooped by, he tossed the energy that had grown within the swirling mist at the creature, and the two collided in a fusion of angry hisses. What flew out of the resultant vapours was truly a marvel indeed. A sleek, almost feline body cavorted through the air; with multiple eyes and a peculiar bat-like snout, it was a dragon dissimilar to any that had come before. And it was of his own doing. Uul’s open maw twisted and stretched into what only could be described as a smile, as his new-born phased in and out of existence through the night’s shroud above.

There is talk that since the rise of Praetoria and the formation of the chaos gate, strange demons have been sighted amongst the clouds above the new continent. Some have described them as huge bat-like creatures with incredible speed, others swear they are flying invaders from the other world, but to the scholars in Draykh-Nahka who have seen their images there is no doubt, these are new, uncatalogued sub-species of dragon. For reasons unknown, these creatures spend most of their time hidden within the clouds, but from the limited studies done, it is evidenced they have a strong resistance to magic and a predilection for hunting at night when the moon is full.

This beast is very usefull in magic centered battle's because of his Void buff, so it can be used as a tank, 2nd line or as last line monster because of his Flying ability.

Click on the image to see the full battle

Earthquake is the rule-set in which Brighton Bloom shines by granting all monster flying so i didn't have to worry about damage done by this rule. As a tank i chose Djinn Chwalla because of the defense and thorn, which would backfire on attacks done by the opponents team.

In 2nd place, i like to put magic monsters with void, because these will attract attacks from monster with sneak, and because the Void Dragon has void, most of the damage done will be ignored, and flying will give it some sort of defense against ranged attacks.

In 3rd place comes a snipe attacker, in this case the Death Elemental.

And then the Venari Bonesmith, because here it has time to load up with life with it's life leach. As closers, Silent Sha-Vi with sneak, and Carrion Shade to take attacks done to the back of my team.

My opponent entered the battle with as much ranged monsters as possible, and the Shield Bearere as a tank to attract all attacks which was quite smart. And, as you can see in the battle, Brighton Bloom made a great summoner for this rule-set. In the 2nd round when the damage of the earthquake is done, my opponents team is down to only 3 monsters with only 1 or 2 life left. And these are taken down 1 by one.

Brigthon Bloom is the Summoner to be used in this rule-set if possible. But you can also use him in high speed teams giving you that little edge to make opponents miss your monsters. As for the Void Dragon, he is of great use as second monster because of its void and flying. This to attract Snipe monsters which do him, in the lower leagues, nearly no damage.