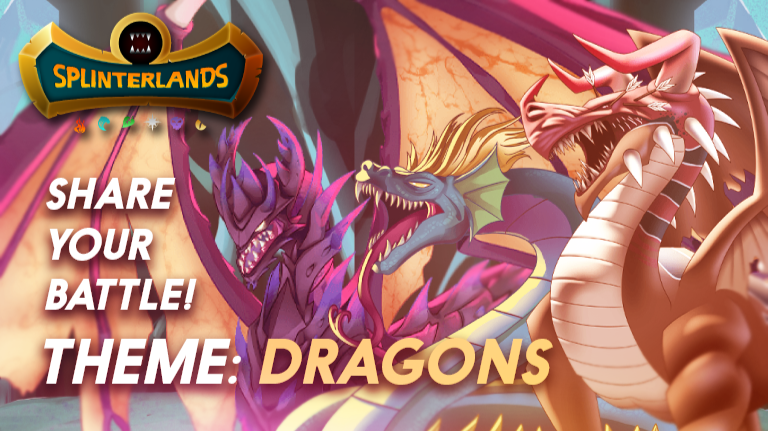 A Splinterlands share your battle with our Scaled Friends

For this weeks share your battle by @splinterlands i took a dive in the rental section of peakmonsters, and i think i found a nice dragon for this entry.

When the Venari dug their tunnels and burrows, creating the Realm of Silence, little did they know of the ancient creatures they disturbed hidden beneath the ground. Forgotten, from almost a millennia ago, these dragons were awakened and gripped by an everlasting hunger. Unfortunately for the Venari, they were the first poor souls to run into these feral beasts and were sent fleeing through their tunnels in horror at what they’d uncovered.”

The Desert Dragon is most commonly found east of the Jade Thickett, on the sandy plains of the Ixzoc. Its long neck is banded red and black, with savage horns that sprout from its head and vicious fangs more wicked than scimitars that line its jaws. Quite often assumed as a lumbering, flightless giant with wings that are tattered and torn, many make the mistake that it cannot move quickly and will sometimes stray too close. But any that have seen it hunt the plain grazers will know, not only can the beast move with considerable speed, the terrifying charge will often leave its target rooted to the spot with terror, unable to flee its impending doom. The Desert Dragon is so big that on rare occasions its attack has been mistaken for seismic activity and minor earthquakes.

Use you can see in the stats list, this is definitely a tank card. With it's high attack and trample it can be used to destroy multiple enemies in 1 turn. But keep in mind that because of it's lower speed, chances of missing your enemy, especially from water, are quite likely going to happen.

For this game, i used this tank in combination with the water element, which i think is great because the water splinter has a lot of great opportunity and sneak monster which can be used with this monster as a tank.

Click on the image to see the full battle

My tactic for this battle was to put in a strong tank capable of destroying an enemy with as less turns as possible, or that could damage a shielded enemy. For this purpose i think the Desert Dragon is a great choice.

I used it in combination of a splinter to attack the weakest enemies first, because the desert dragon isn't particularly strong against Magic attacks. That is why i chose Water, in combination with 2 Opportunity and 1 sneak attacker.

As a closer i entered the Kulu Swimhunter, which does 2 damage so should be able to damage shielded enemies as well.

On entry of the battle i saw i made a good choice for my cards. Because it wasn't a magic based deck the Desert Dragon should be able to pack a punch. And that's what it did. After my defense on the Feasting Seaweed got taken down, it was the Desert Dragons turn to take down the Kobold Bruiser in 1 attack, and then trample forward taken the Living Lava's defense down in the same turn.

After gotten hit by the Tenyii Striker, my Deeplurker took down the Serpentine Spy, easing the battle a little. Then it was the Living Lava and Radiated Brute's turn to take down my Desert Dragons defense and health to 3. But after surviving this, the Radiated Sorcherer was taken down.

So this left my enemy with only 3 monster to enter round 2.

This is where things started to get a bit tricky, and i thought i lost this battle. This because it would probably mean the end of my Desert Dragon. And thats what happend. After a few hits on the Living Lava and the Tenyii Striker, the Living Lava took down my Desert Dragon, and the Radiated Brute, with it's reach ended the battle for the Feasting Seaweed. This left my Pelacor Bandit in attack position, but he couldn't damage the Living Lava.

In round 3, the Kulu Swimhunter was able to do damage to Living Lava just before it got taken down by the Tenyii Striker. Then the Deeplurker end the battle for the Living Lava, and here's where the Palacor Bandits flying and speed came into play. The Radiated Brute made it's first miss. And so we entered Round 4.

In round 4 and 5, the Deeplurker took some damage, but took out the Radiated Brute. This action placed the Tenyii Striker in tank position in round 6.

In round 6, after another miss on the Pelacor Bandit, monsters depleted it's health to just 2. This meant that no matter if the Tenyii Striker missed or not, it would be ended in round 7, leaving a victory to my team.

For battles against Melee splinters or with the 'Weak Magic' Rule-set the Desert Dragon is an effective tank card. It can make great use of the Trample ability against most other teams. It's only down side is, is that it's not a very effective card against magic opponents.