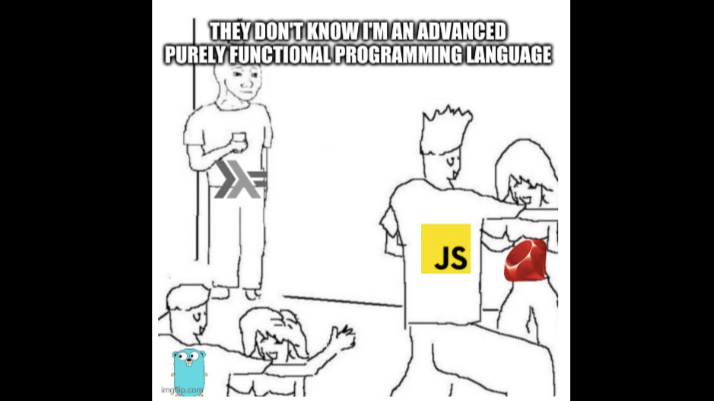 Digital asset dreamers, we love you!  Y'alls infatuation with crypto makes us forever amorous for you & yours!! And we love the transcendent Publish0x, all of us together in a spiritual brotherly/sisterly bond of love!!  Which will continue to be sorely tested in the fiat wars over the Prometheus-like Nakamoto gifting pure hard coins to free the people from the bondage horrors of the elites controlling the printing presses.

Think we go too far?  Inflation in Hungary in 1946 doubled faster than every day.   More recently?  The IMF called inflation in Venezuela at 10,000,000% in 2019, versus the BCV (central bank of Venezuela's) estimate of 53,798,500%!!!  Did that hurt?  Eight million people fled for their lives, a record displacement in a continent famous for serious gummint issues.  How did they finally slow it down?? BY ALLOWING THE PEOPLE TO USE HARD(er) MONEY THAT'S HOW!!!  Will inflation return as dollar printing tracks the Bolivar, and Maduro starts taxing forex??  Stay tuned!!!

That's the backdrop for today's Publish0x exclusive coverage of the self-anointed "TradFi" agitprop excuse for crypto news in the Financial TImes.   Rally round the sat's boys & girls, sally forth into the spin, hold your noses!!!  Never wasting a good crisis, the FT is fighting hard against hard money!!

First, let's get the pure fluff out of the way.  Here's a fine lurid headline: 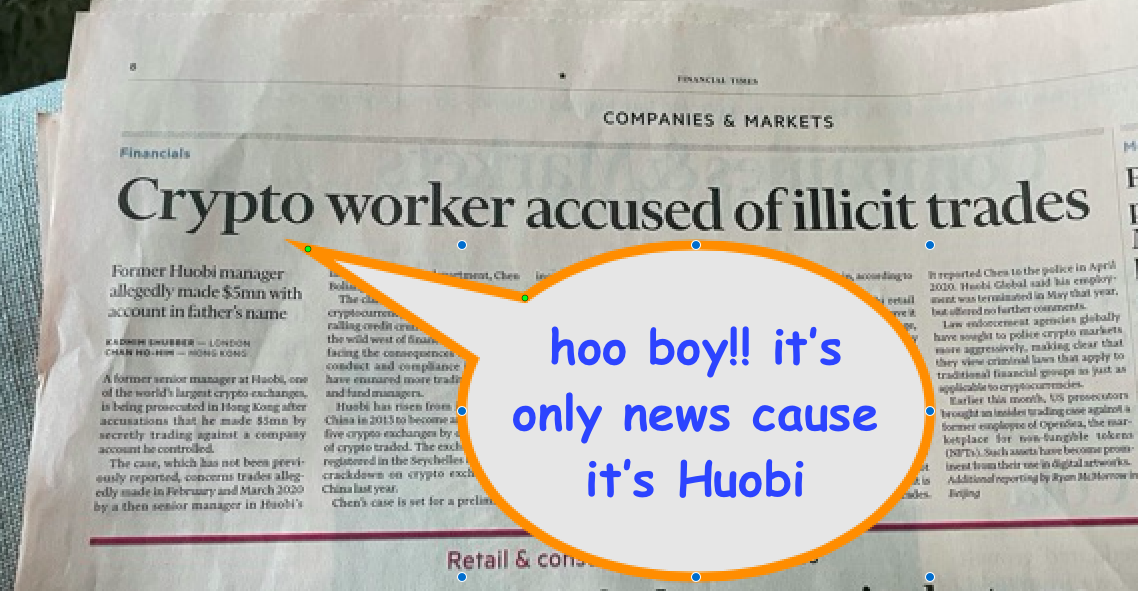 Those evil crypto people!! TLDR:  Chen, an ex-insider at Huobi is getting jacked in HK for insider trading, stealing $5MM in USDT by front-running.  And Huboi is a top five crypto exchange!!!  Chen opened an account in his dad's name with a 20MM credit line, and traded against (ahead of) the Huobi account he also controlled. Chen was fired/arrested in 2020, now out on 25K bail. The FT huffs n puffs about policing crypto aggressively.  This shows officials bust crypto insider trading,  as did the recent OpenSea case. Big whoopee.

Why this is agitprop: Credit Suisse recently (2020) coughed up a front running fine to the tune of $135 MM.  C'mon Chen, those are rookie numbers!!!  Chen ain't no Ivan Boesky, the Gordon Gecko "greed is good" dude.  Ivan got his insider trading fine down from 200MM in 1980's money, $700,000,000 today, down to 100MM by ratting out Drexel, Kidder Peabody, and other Fortune 100 firms.  Very recent history?   Less than a year ago, the SEC filed the same charges against Sergi, who in his WIFE's name stole ~2x Chen's haul.   But check the link below:  THE SEC DOES NOT REVEAL THE NAME OF THE (major Canadian) FIRM SERGI WORKED FOR!!! Unequal application of the law of the press release much??  Why? The SEC's implicit point from the Sergi case (versus the FT's explicit point fighting crypto) is this was a Chen crime, not a Huboi crime, & Huboi nailed Chen.  Bonus funny??  Chen stole his funds in USDT, FT!! The FT can't smear Tether in this story, but they chit on Huboi  and crypto just fine!!!

Next up, a pretty vacant rehash of the Voyager stutter.  Voyager shares down 60% on news of 650MM loan to Broken (Three) Arrow(s).  BlockFI & Genesis also had TA loans.  Rehash Terra crash. Buried in the tail, we find the loan from Sammy Fried to Voyager. 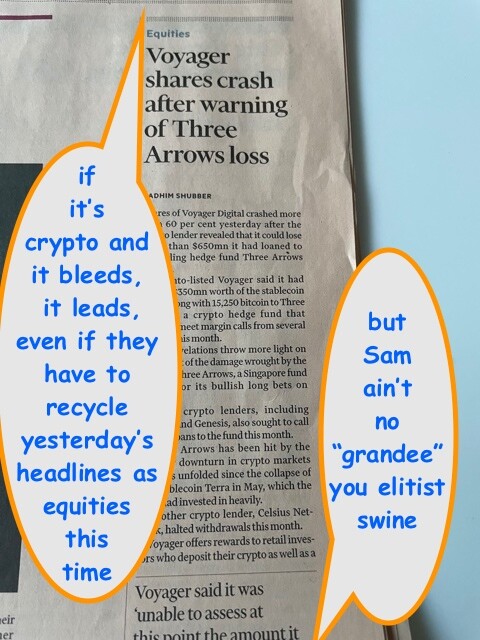 How is this spun/slanted/biased?   The FT printed YET another PARAGRAPH explaining stablecoins STILL WITHOUT risking the chance of educating FT readers by mentioning ALGO  (vs FULLY BACKED)  stablecoins.  What a wild coincidence, that's about twenty times now.     Bonus funny snuck in at the very end? They call Sammy a crypto "grandee," a hereditary title conferred by royalty.  Now THAT's an excellent example of a subtle, yet fully nasty-ass class warfare stab in the back from the FT.  Sammy started getting rich less than four years ago, making $25MM a day arbing the price of Japanese bitcoin versus American bitcoin.  Sammy is no aristocratic blueblood,  he wears shorts!!! He's no grand poobah, quit projecting ya schmucks, no one entitled Sammy.    Sam is a titian, a self-made man, a freaking Hercules,  now acting as Atlas holding up the crypto world, y'all absolute -sswipes.

Finally, the big smear of the day:  Emergency plans for crypto!!  Here's a yellow journalism lead: "Crypto networks that pledged to put users in control have put themselves in charge as they try to survive(!!!) TLDR: DeFi's  Maker Dao, Solend and Bancor have "stepped in with emergency plans"  as numbers go down. Stevie Diehl says decentralization rhetoric is BS. DeFI promises a "utopian financial future without a centralized intermediary such as a bank or stock exchange,"  rather smart contracts run by governance tokens.  But defi has "regular" hacks of "hundreds of millions of dollars."  Solend proposed taking over a (leveraged) whale's wallet, but backed off. Bancor stopped protecting users against "wild market swings."  And Maker Dao, after voting, shut down a link to Aave cause exposure to Celsius.  Prof Ingo, at some tiny Canadian university (ranked 657th in the world) says consensus voting is supposed to give users more say,  but users with lots of tokens rule. Somehow all this is "vindication" for regulators who say DeFi's falsely claim decentralization.  The BIS,  the bank for international settlements owned by central banks, says DeFi codes can't handle market moves and a central authority will always be needed.  Regulators & fans warn of the death of DeFi,  or a market shakeout.  Got it?? There will be a pop quiz. 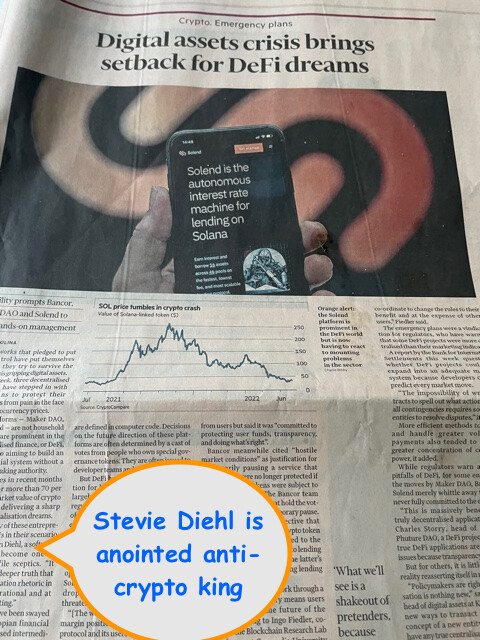 The real story:  WTF, FT?  Nobody "put themselves in control."  Who the h-ll is Stevie D, "one of crypto's highest profile skeptics"??  Yes, decentralization is easier said than done, but none of this touches on that.  Going back to Mount Gox, there have been five such hacks, is one every two years "regular?"  Even if it is, do we care? three trillion in wealth created, a couple of billion swiped,  that's not even 0.1% and again has nothing to do with this conversation, just a random smear.   Yes, Solend oddly voted to seize a wallet but backed off and did exactly NOTHING.  Bancor voted to drop one feature,   Maker DAO the same.  Sounds like govvie tokens working just fine to us!! What, Ingo baby, have you never heard of shareholders voting??  and market shakeouts are good!

Zoom out for GIANT hypocrisy.  What an absolute shocker that the BIS thinks centralization will always be needed.  Remember the evil heritage of the BIS?  Fired up for reparations against Germany after WWI, which CAUSED WWII.  In 1939, the BIS & appeasing Brits stole 23 tons of gold  from Czechoslovakia to give to the Nazis!!!  WTH is THAT worth after inflation?  Bretton Woods tried to kill the BIS in 1944, but the assaholic  Keynes (the ANTI Austrian economist, to me, grandfather of MMT, whose crap is shoved down grad student's throats while ignoring  Friedman & Laffer etc)  saved the BIS on behalf of the Brits.  America & others pulled out, and the BIS contorted thru semi-private status (think: privatize the gains, socialize the losses) to be owned by central banks.  Today, the FT thinks BIS should control crypto.  And the fat man thinks we should give him ALLLLL the donuts.

Zoom out and see how the FT avoids educating anyone on crypto, deceiving instead.  Talking governance tokens, they could define a DAO in three words.   Maker DAO runs DAI, an algo stablecoin striving to be decentralized.  But the FT can't SAY "algo stablecoin" except when forced to quote the Korean "Fat Man's" lawsuit.  Solend is cutting edge tech within the SOL blockchain, a serious ETH competitor, and Bancor is a tiny DEX chugging away at around 0.1% of market volume.  Yes, there are many strange and wondrous DAO things going on under the sun, but Bancor did not protect anyone against "wild market swings." NO ONE can do that, FT.  Bancor suspended protection against impermanent losses, the #1 damage from rug pulling shills pumping and dumping chitcoins in liquidity pools.  Alright, OK, we would settle for the FT just for once saying ALGO stablecoin.

OK, that's about it.  God bless anyone who's still with us.  Wait we lie. In Ingo & Stevie, we learned the FT is scraping the bottom of the barrel for crypto critics.   Who is Stevie D, the software engineer the FT has anointed as the new king of crypto critics? Stevie seems to be a pencil necked Haskell geek in London. Sweet Jesus, Haskell??  what century is this? 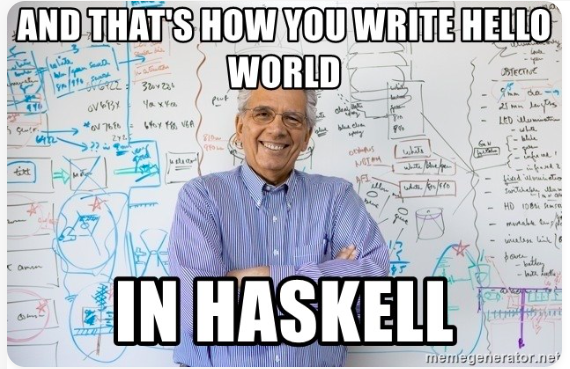 what, like 0.1% of all the code on GitHub is written in Haskell 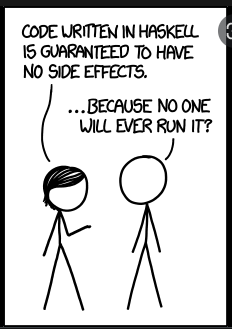 So Stevie is joining the pantheon of, we dunno, LaGuarde, Buffet, Gates, Krugman, Roubini, Schiff, Ma, Bernacke et al?  All of those people (along with many ex-crypto critics) have at least done something with their life.  Stevie is nobody on LInkedIn, but he has a blog, ya can look it up.  After writing Haskell cr-p for ten years that even he admitted no one read, he discovered Twatter & the dearth of possibly seemingly intelligent people that hate crypto.  Stevie dropped Haskell, now he copypasta's - crypto is "smashing puppies," to buy coffee with lightcoin destroys an acre of rainforest, etc etc.  - Stevie says Biden could ban BTC tomorrow.   How's that working out for, dunno, every country that has tried it, you bitter moronic fascist?  Nobody's banning the CME's casino, you fool.    We don't give a hoot about what Stevie thinks of Web3 anymore than we care about Krugman saying the Interweb is less than the fax machine.  OK, gotta hop, thanks so much.  But Haskell memes are like potato chips, and this one is Stevie apropos: 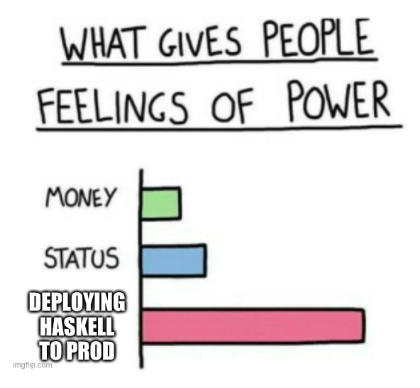 Peace love and python, java, ruby on rails, even lisp, anything but *&(*&# Haskell