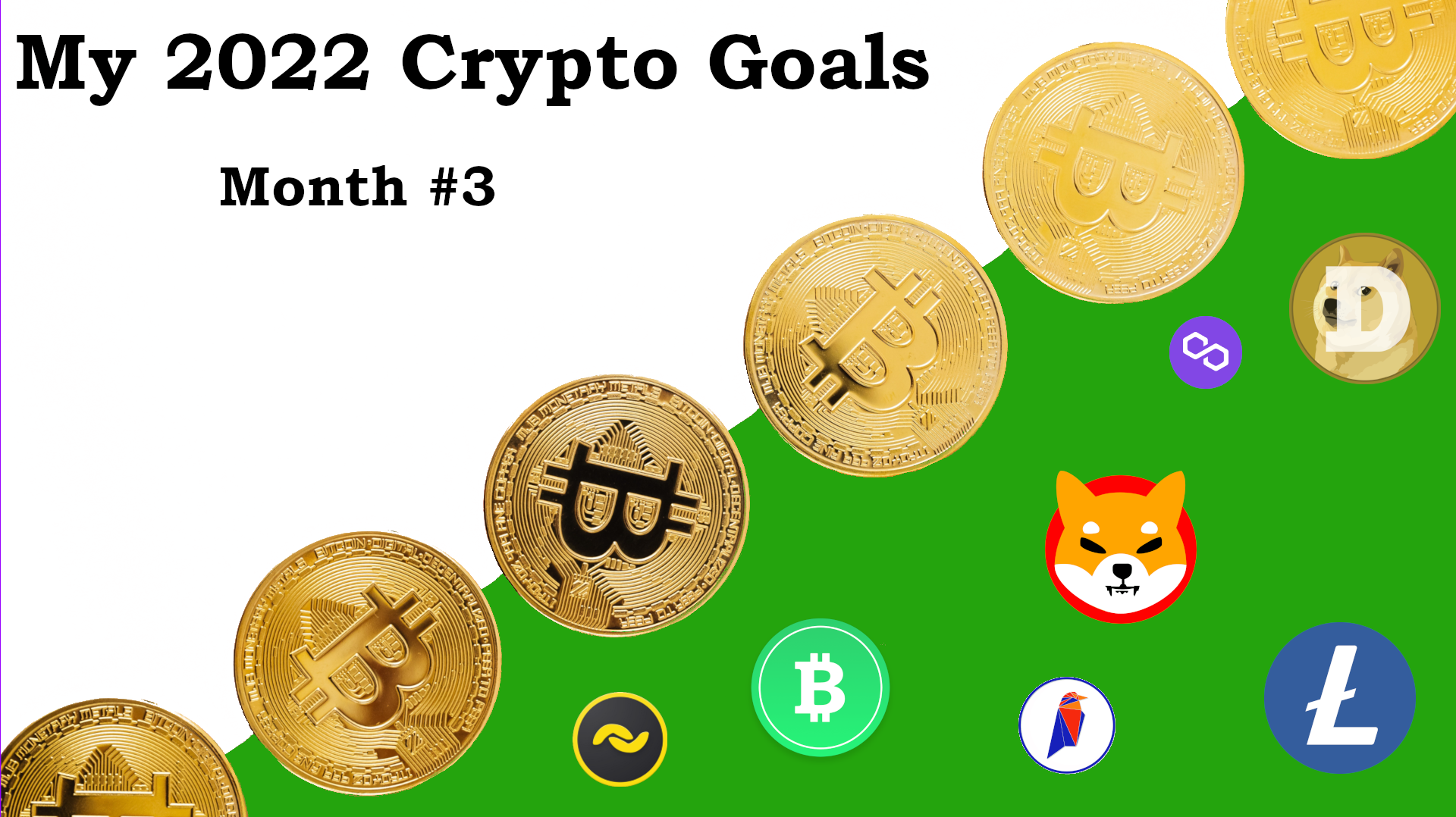 With March in the bag it is time to look back on how much crypto I earned this month. As always let take a look at what our goals are for the year first. 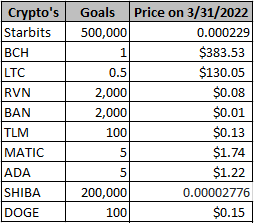 With that out of the way let's get into how I am progressing on my goals. At the time of writing I am 79.30% done with my goals for the year of 2022. And honestly it's a little better then that but I will explain. 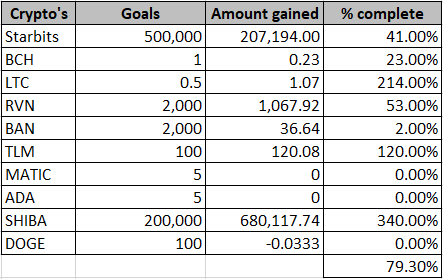 I am slowly but surely gaining more Starbits from Rising Star. I am now a level 80 and have gotten all 4 of my band members. Even though I can now do mission is the County Tour section I am still performing the 'Local Mini Support Tour' mission mostly with basic Music Lessons sprinkled in. It's the best way I found to earn a steady stream of Starbits and also earn from Skill in game.

The vast majority (if not all) of my BCH is coming from Noise.Cash. If you like Twitter but want to get free crypto while posting then I highly suggest you give Noise a try. You can check me out here: https://noise.cash/u/TrocProcLock It's 100% free to join and free to earn.

You may remember this was a special case. I hit this goal early because I swapped a lot of Swap.Hive for LTC because well I really wanted 1 full Litecoin at least. So I just swapped for it and marked it as complete. I am still doing some faucets here and there to earn more Litecoin but not really going full steam on it anymore.

I used to mine for this exclusively but have since switched my mining rigs over to mine with "unmineable". I think I will go back to Ravencoin eventually because well I want to hit my goal. I love Ravencoin and plan to hold these bad boys for a while. HODL!!!!!!!!!!!

This was is tricky. So I have earned more BAN this month however according to my report I have less then last month. That is because I took out about 550 BAN and wrapped it on the Fantom blockchain to put it into a Liquidity pool. So I still have the BAN but I moved it out of my wallet and wanted to make that as a reflection on this report.

The Liquidity Pool it is in, is earning me wBAN daily which is awesome. It is just another way for me to earn BAN. Am I going to hit my 200,000 goal by the end of the year? Most likely not but I still want to get all the BAN I can get my little monkee hands on.

It's funny how this game has played out for me this year. At the start of the year I was mining on terrible land and earning terrible rewards. Now I am earning a pretty steady 4 or 5 TLM per day if I stay active. I was originally mining on a CryptoMonkey land to possibly earn those NFT's however that seems to have dried out significantly.

So now I am mining on Byron's land to earn some Zombies. We shall see how it goes. I am not holding my breath because I have had bad luck with NFT rewards for mining in Alien Worlds. But if I do manage to get some Zombies then I hope I can stake them at Wombat Dungeon Master. I recently bought a few Zombies for staking and I they really helped my mining power.

This is the tricky one. I have 3.39 MATIC sitting in Rollercoin right now waiting to be withdrawn once it is allowed. I am kicking myself because I had the 5 MATIC that was my goal but I bought some RLT with it to top that up so I could buy the Ukranian miner during their event.  I don't regret it but still just am bummed I had the 5 MATIC at one point.

I have no idea what they minimum withdrawal will be for MATIC once it is allowed to be withdrawn. I think what I will do depending on the limit is wait until I have the 5 MATIC and then withdraw. However is the minimum limit is like 0.50 MATIC then I might just withdraw first thing and withdrawn again later when I have enough to hit the goal of 5.

I let this slide. I have not put any thought into this one this past month. I am thinking I kind of want to swap it for another crypto. I kind of want to swap it for Solano. I like Solano and want to earn more of it. So I am thinking I just do a clean price swap of them both. So five ADA is worth about $6.80 at time of writing. $6.80 of Solano is 0.05. That seems like a low bar to get so now I am thinking my goal should be 0.1 Solano. I will play around with this idea in April.

I reached my goal of SHIB and then some. I mined with 'unmineable' for my SHIBA INU. I might go back to get some more because with everything I have been reading it might moon soon once all these projects that are in flight start to take shape. We shall see.

No progress has been made on DOGE. I am thinking that I will start to work on making back the amount I lost for moving my DOGE around before. Ugh I don't know though.

The number of Faucets I do now have greatly reduced. I just got burned out by a lot of them by either have to constantly relog into them or they stopped working or they changed the withdrawal limits. I have picked back up into Splinterlands though and play it pretty regularly now so that is great for my DEC earnings :)

I play Wombat Dungeon Master now and I love it. It's a NFT staking game and you can earn either WAX or EOS in it. I have also gotten into Liquidity Pools a little this month. I have a FTM-wBAN pool and a wSTA-BEETS pool that I am currently it. I like them and they work. I think I am going to experiment some more and see what else is out there.

Alright guys that is it for me. I hope you all have a great day. May the Crypto Gods forever be in your favor!