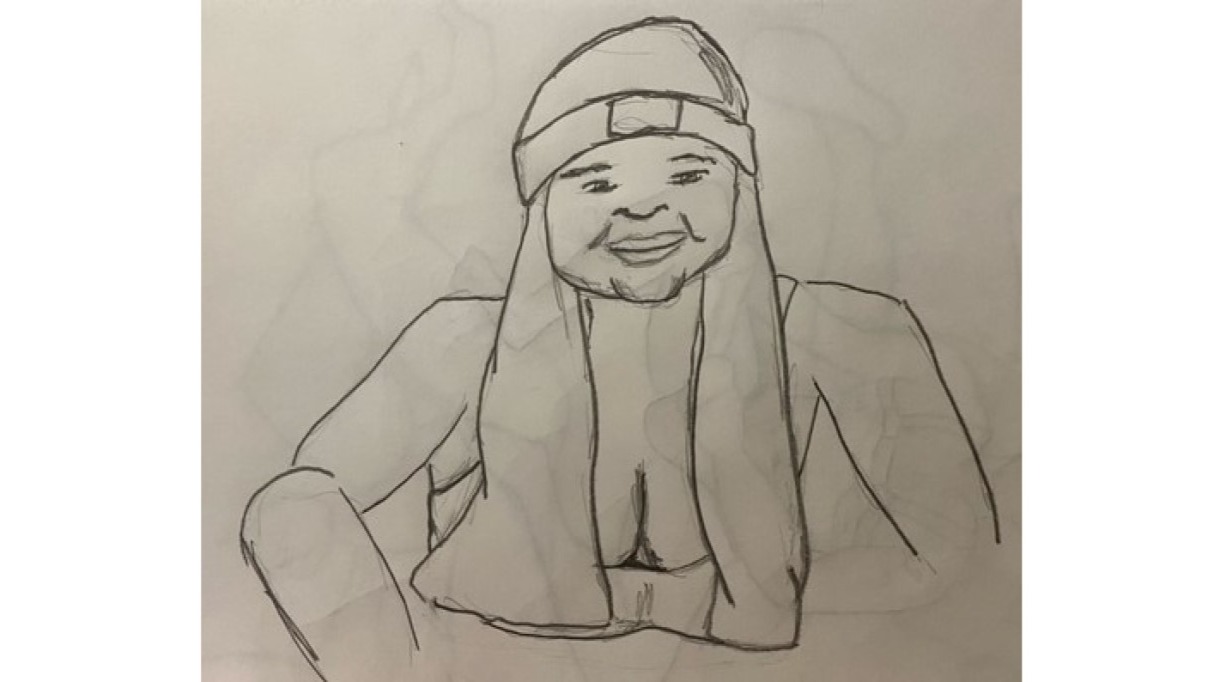 Today was the monthly Re-Drawing Masculinity figure workshop, and I was afraid I would have been badly spoiled by all of the longer poses in the other workshops I have been taking. However, I was pleasantly surprised that returning to primarily very short poses (6 two-minute poses, 4 three-minute, 6 five-minute, 2 tens, and 2 fifteens, nothing longer than 15 minutes) from workshops that started with 5-minute warmups and progressed pretty quickly to 20-minutes - I did not find myself suffering from the shorter time, at least not in terms of outcomes.

I mean, I did mutter "...forgot how short two minutes is..." a bunch of times, but I was actually really happy, especially given the time constraints, with the sketches I was able to produce. I've gone back over all of them to fix small errors and highten contrast, etc, but I was able, within the (often very short) time allotted, to capture enough positional and anatomical information to produce these sketches.

I want to start with my favorite of the day, which is a five-minutes sketch of one of the students, a gorgeous woman named Kennedy: 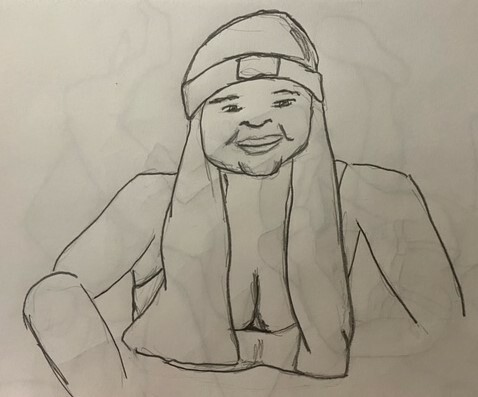 I love this sketch so much. Kennedy has a truly infectious smile, spectacular poise and is generally cheerful enough for the whole class to feel it, and I really wanted to capture some of her attitude, because otherwise why am I even doing this? That meant spending a lot of time thinking about her face. As you know from previous blogs, faces do not come easy to me. I need you to believe me when I tell you: When I look at this sketch, I say "oh! someone drew Kennedy!" (I am  not yet to the point where I can reliably remember that 'someone' is ME haha).

Kennedy also has extremely cool and meticulous braids that must have taken forever to braid, and I would have loved to draw those properly. I believe that is an exercise for Future Me, but there was no way I was going to be able to do justice to her hair in 5 minutes. For sure I want to go back in later - after doing a BUNCH of exercises about how to draw hair - and do that. At that point, I'll also, I think, add color. She was sitting in front of a rainbow flag, for example, and I think that would set off the picture really great, especially given the rich brown tones of her skin.

In case it's not obvious, I love drawing Kennedy.

OK with my gushing out of the way, let's go from shortest poses to longest! Here are the two-minute sketches: 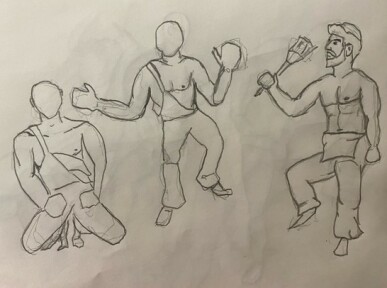 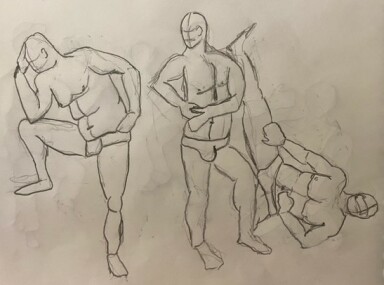 Briden (top) was wearing his overalls today. If I had had twenty minutes to work with, I would have spent most of them trying to capture the pain stains on his overalls. He also has elaborate tattoos. So far I have been too cowardly to try to draw those, but someday.

Paul (bottom) is really cool about varying between standing and reclining poses, and today I ran out of room on the page. I actually sort of like the collage-y way the center sketch and the right-hand sketch intersect. In Paul's 2-minute poses I tried to start working on posture. My sketches almost always look like they are very strict Victorian posture, and of course the models almost NEVER DO: they lean and the slouch and they bend, because they know those things are most interesting to draw. Yet, somehow my sketches seem very upright, usually, so today I worked on that. You can sort of see it in these 2-minute warmup sketches, especially the one on the left. I could have caught his lean more, I think, but the start is visible. It's progress.

Here are the three-minute sketches: 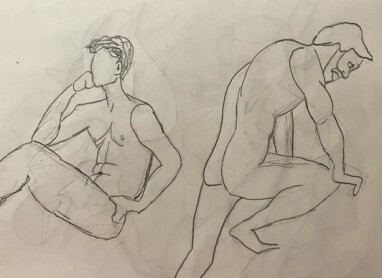 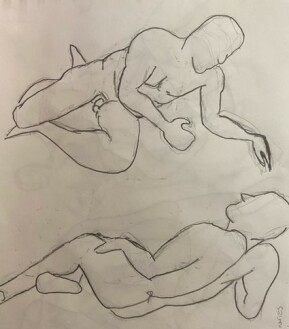 I think it may be wishful thinking, but you can sort of see Briden (top) bending his back forward in both of his poses. Paul (bottom) didn't really bend as much in these, but I like that he doesn't look stiff in either of them. In both sets I did a little more work on the faces, trying at least to add the shapes of the face outline with a nose and a brow ridge, etc. The one with a full face doesn't look much like Briden, but it doesn't look like a weird mutant either, so I am taking it as progress. lol.

Here are the five-minute poses: 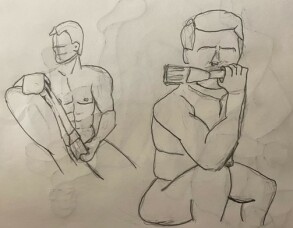 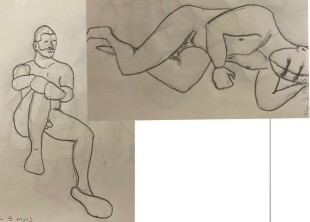 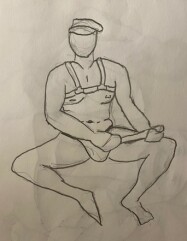 At five minutes, Briden (top) and Paul (center) both decided today was the day for us to practice foreshortening, which was wicked interesting. Frank (bottom) decided to give us a breather after all of that.

Here are the ten-minute poses: 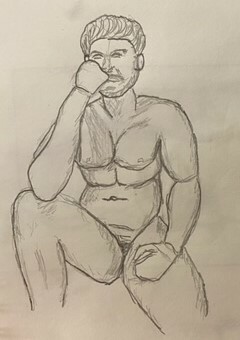 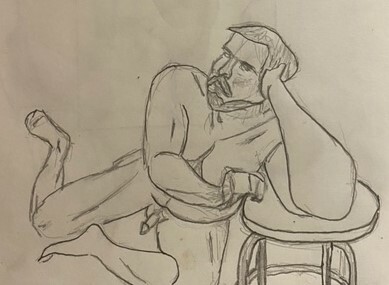 I had lots more time to think about the faces in these poses. I still need to work on Briden's face (top), but the Paul (bottom) faces are staaarting to look a little like Paul. I think I really, finally managed to capture Briden's forward slouch, which is pretty exciting. Paul's back foot is a little bit wonky, and I can't decide if it's a foreshortening problem, an angle problem, or a basic shapes problem.

Finally, here are the fifteen-minute sketches: 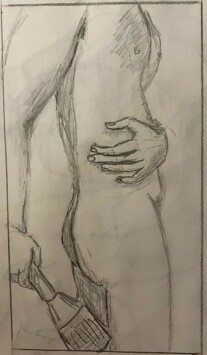 Briden decided to zoom in for the final, longest pose, which spared me screwing up his face again haha. But I was able to focus in on his hands and shading, an I am pretty proud of how that all came out. 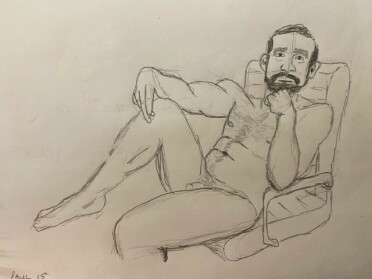 Paul is younger than I have made him look here, but I think in 20 years this may very well be what his face looks like. I am making progress. I think if I go at the guidance lines wiht an eraser and soften the eyebrows, add a little more shading to the face, I will be well on my way to capturing Paul's face. Again, I had time to think about his hands, so here he has fingers, and knuckles and such.

I feel like all of these figure workshops may be getting boring for you all, and I do apologize for that. I try to put other stuff in between workshops. But even so, I am very excited with the progress I am making as a result of all this figure practice.

Thanks for bearing with me :D 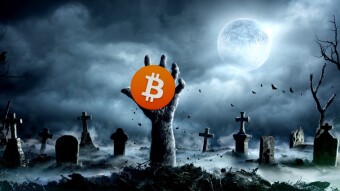 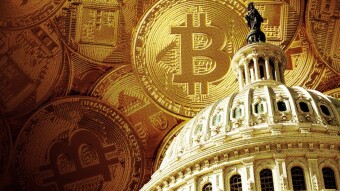 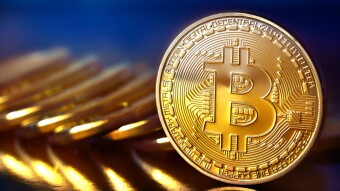 Bitcoin Analysis – When is the Next Bull Run?