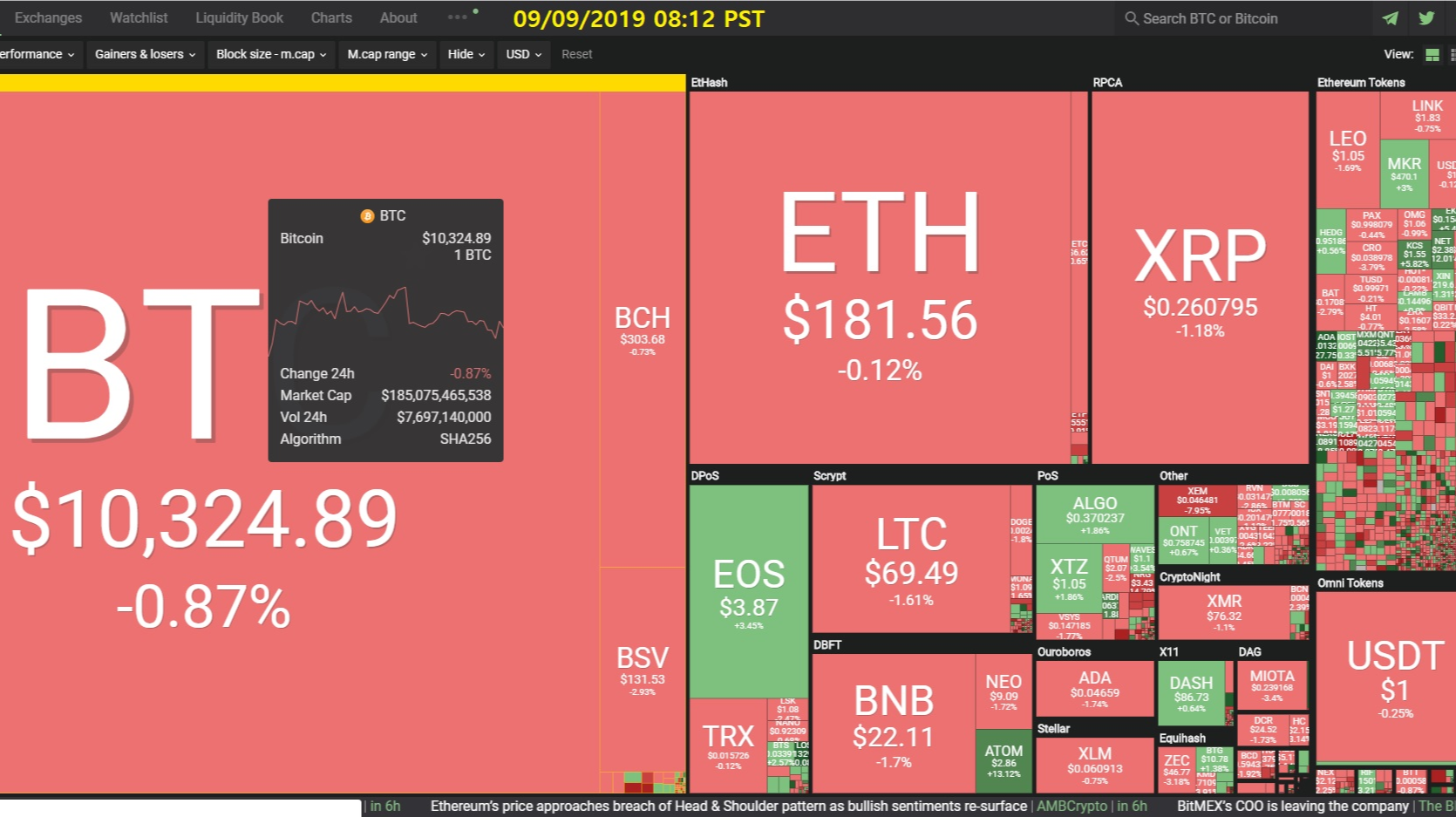 Bitcoin 7-day price chart. Source: Coin360 | The views and opinions expressed here are solely those of the author and do not necessarily reflect the views of Cointelegraph. Every investment and trading move involves risk. You should conduct your own research when making a decision.

Data from Coin360 showed BTC/USD staying lower in its weekly trading range on Monday, having risen as high as $10,930 on Sept. 7.

The momentum, which took Bitcoin over $1,500 higher during last week, failed to last, with a sudden drop producing recent lows of $10,080 earlier on Monday.

At press time, Bitcoin hovered just above $10,200, equating to daily losses of 3.15%, while weekly gains remained at around 4%.

Over the course of the quarters of 2019, Bitcoin, among other kinds of cryptos out there, have been enjoying some pretty impressive returns thus far.

Compared with the bitter winter of 2018, and according to CoinMarketCap: Bitcoin has managed to recuperate more than 76 billion dollars on its total market cap compared to the same time last year ($111 billion – September 2018 versus $187 billion as of the time of writing).

It's because of this impressive break out over this year that questions are arising as to whether we are seeing history either repeat or, in the words of Mark Twain (allegedly), rhyming with the financial performance we saw back in 2017.

The community is worried about potential negative changes in XRP price after 100 million XRP was sent to Jeb McCaleb, one of the company’s co-founders, from Ripple Lab’s wallet address. Ripple continues with its dumping spree despite threats received from the community members last week. In the latest, Ripple Lab’s wallet sent 100 million XRP tokens worth $26 million at the market rate to the company’s co-founder Jed McCaleb. Popular Twitter handle Whale Alert was the first to report about this transfer.

The hash rate for bitcoin is approaching a monumental milestone as the cryptocurrency nears 100 quintillion for the first time.
According to data compiled by monitoring and wallet service Blockchain, bitcoin’s network topped 94 quintillion hashes per second on Sept. 8, inching closer to the milestone of 100 quintillion. While BTC’s hash rate has already hit a new record, the 100 quintillion mark would make for a show of continued growth for the network’s adoption.

Bitcoin defends $10,000 support paving the way a much-needed reversal.
BTC recovery steps above $10,500 but support areas towards $10,000 remain vulnerable.
Following the impressive recovery witnessed last week, Bitcoin’s upside is still capped under $11,000. In fact, a bearish wave over the weekend refreshed the support at $10,000. Fortunately, the buyers were strong enough to stop declines below this level. At the moment, BTC is hovering above $10,400.

In a series of social media updates on September 7, Brandt, who is well known as a bullish Bitcoin proponent, said that while downward pressure was evident, a breakout could still occur.
“Bitcoin meets the definition of a descending triangle. Don’t let newbie chartists tell you different,” he wrote, commenting on two recent BTC/USD charts.
He continued:
“There have been numerous occasions over the years when prices blew out of the upside of a descending triangle.”

Blockstream CEO Adam Back Sees Bitcoin At $50,000 In No Time [zycrypto.com]

At the current price of $10,253, Bitcoin’s year to date return is still over 200% and has generally dragged most of the major altcoins up with it. Even with the current returns, analysts still have considerably bullish sentiments, with some forecasting that Bitcoin could hit its current all-time high of $20,000 before the year runs out. However, a much more bullish prediction which put Bitcoin at $50,000 has come from Bitcoin pioneer and Proof of Work (PoW) creator, Adam Back.

If it wasn’t for Bitcoin there would be no Libra. That much is self-evident, since Satoshi’s creation laid the groundwork for every crypto asset that’s followed. The extent to which Bitcoin was responsible for spawning Facebook’s currency has now been made brutally clear in an interview with Abra’s Bill Barhydt. The investment platform’s CEO claims that Facebook wanted to integrate BTC directly into its billion-strong social network – but was forced to create Libra instead due to Bitcoin’s inability to scale.

Crypto influencers and companies, such as the investment firm Grayscale and merchant bank Galaxy Digital, are increasingly pushing the narrative that Bitcoin is a store of value as strong as gold.
Grayscale, in particular, launched a full-scale “Drop Gold” campaign earlier this year. The multi-million dollar marketing campaign features a set of TV commercials airing across the US.

There are a couple bullish signals starting to form for Bitcoin though. A golden cross may reveal itself on the four hour time frame tomorrow. This is an uptrend signal that occurs when a faster moving average crosses above a slower one, they are usually a 50 and a 200 MA.

Trader ‘CryptoHamster’ has noted a bullish divergence which could also lead to further gains.

“Small, but promising bullish divergence has been formed on a weekly time frame. Considering the low volume recently, it is likely that the breakout will be to the upside.”

The Future of Cryptocurrency With Online Casinos [coindoo.com]

The possibilities are endless when you start thinking about the change in dynamics, transparency, and quantification that blockchain technology can bring to virtually every aspect of our lives. Online betting and sports betting can highly benefit from it because these things that the use of cryptocurrency brings to the table are the things that online betting faces issues with. Best bitcoin casinos 2020 is a great place to know what casinos to bet on to get maximum returns.

Tron Foundation has been constantly focusing on the development of the ecosystem. The face of the Tron Foundation, Justin Sun has made sure that the foundation doesn’t steer away from the crypto spotlight.

After showcasing its talents in the Dapp sphere, Tron Foundation seems to be expanding its horizons as it ventures into the content providing business. Recently, CEO Justin Sun shared a tweet, indicating an easy method to earn BTT/USDT. The tweet read,

New Crypto Phones Could Emerge in the Market As LG Wants to Follow Samsung into the Space: Report [u.today]

A report by the South Korean news platform IT Chosun says that the electronics giant LG is going to follow its rival Samsung right into the crypto space and compete for the attention of crypto phone users.
The South Korean source says that LG has already conducted the necessary research of companies working in the area of DLT and dApps. The news outlet believes that LG is very likely to accept the challenge thrown by Samsung.
Last week, the Samsung giant released another smartphone that has an embedded digital wallet – it was done together with the Kakao giant, based on the Klaytn blockchain network.