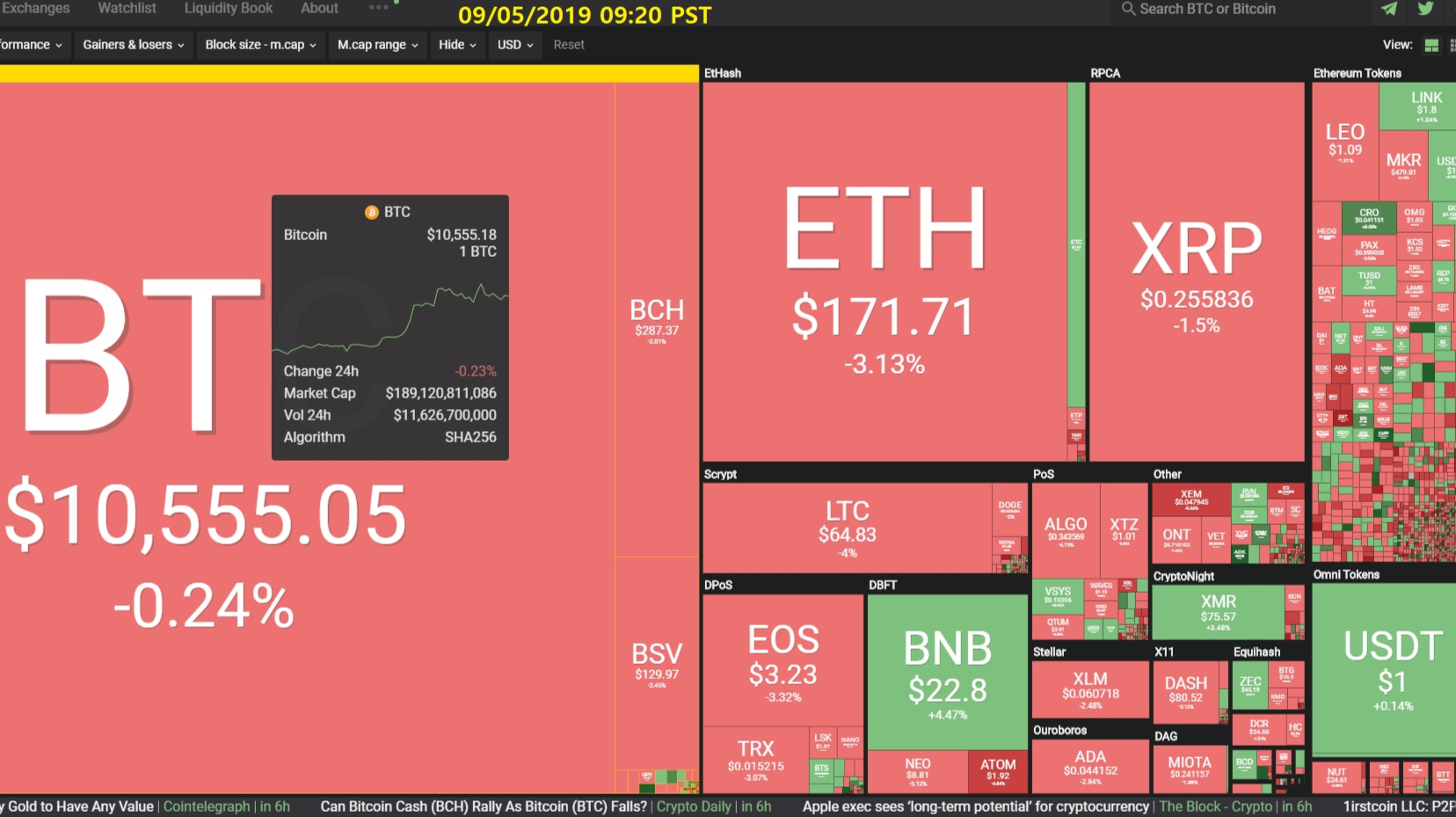 The 12% seven-day gains excited analysts, who abandoned bearish sentiment to forecast a continuation of upward momentum. A subsequent slowdown in growth has tempered those aspirations, however, with markets now waiting for outside events to sway the mood.
For Filb Filb, a popular Bitcoin trader, the launch of institutional trading platform Bakkt later in September is the closest such deciding moment.
“Bitcoin continues to consolidate above $10k,” he summarized in private comments, adding:
“A lot of people are hoping to get bids filled below $9k; the market rarely gets what it wants and I wouldn’t be surprised if they are forced to buy higher. But let’s see what happens with the launch of Bakkt.”

Bitcoin, which many analysts projected as a speculative hedge against the US-China trade dispute, saw its uptrend coming to a halt. The benchmark cryptocurrency was trading 0.47 percent higher to trade at $10,623.99 as of 1100 UTC, hinting a slowdown in otherwise winning streak noted earlier this week – of up to 16.1 percent in the positive territory.

Bitcoin prices float back into a larger bearish pattern, while indicating a bullish bias in the shorter term [ambcrypto.com]

As seen above, BTC prices have formed a bullish pennant indicating a possible bullish breakout on the shorter time frame of one hour. The pennant is seen to be preceded by a flag pole, which has a steep rise, further confirming the pattern. |Source: TradingView

Bitcoin’s bull run seems to have become constricted after it hit a peak of $13,800 on June 26, 2019. The price has been consolidating ever since, trying to breakout. The interesting thing to watch out for is the direction of the breakout. So far, there are two obvious predictions; one faction believes that the consolidation is a continuation pattern and will continue trending higher, while the other faction believes that the consolidation pattern is a descending triangle and that the price might dip to as low as $8,100 in the near future.

New York regulators have approved the launch of a new cryptocurrency developed by global exchange Binance. A collaborative effort between Binance and digital asset infrastructure developer Paxos, the stablecoin, Binance USD (BUSD), will be pegged to the US dollar.

According to today’s announcement, consumers will be able to buy BUSD and redeem the stablecoin 1:1 for the US dollar on the Paxos platform. Users will also be able to buy BUSD on Binance.com for trading against three initial pairs: BUSD-Bitcoin (BTC), BUSD-Binance Coin (BNB) and BUSD-XRP.

Apple first got into mobile payments in 2014 with the launch of Apple Pay with the promise to “transform” the mobile payment market. Apple Pay processes nearly one billion transactions a month.Last month, the company also launched its first credit card, the Apple Card, built into the iPhone’s Apple Wallet App.

This Goldman Sachs card, however, restricts the purchase of cryptocurrencies using the card, as per its customer agreement guidelines.

The Abyss Joins Waves Platform for a Decentralized Marketplace of Goods and In-Game Items [coinspeaker.com]

The Abyss will use Waves’ blockchain technology for building a universal marketplace of all tradable goods and in-game items offered by its partner game developers through their games. This is the first platform of its kind. Users will also be able to buy available items with Abyss tokens and sell it to others. This will help game developers to be able to have another channel of monetization for their game projects on The Abyss.

Bitcoin Price Analysis: BTC Clouded By Market Indecision At $10,600–Where To Next? [coingape.com]

Bitcoin’s correction hits pause at $10,800 as buyers lose traction against the bears.
Bitcoin long-term technicals suggest a looming upward correction that could test $11,200 level.
Bitcoin is dragging the entire market into indecision after the second rejection from $10,800 in the same week. The coming sessions on Thursday are likely to determine the next direction. However, at the moment we will have to get accustomed to a ranging trend between $10,500 and $10,600.

Speculative price predictions always draw a lot of attention. Over the past two years, they have ranged from a crash to zero from the hard-line hecklers to a million dollars from a certain cybersecurity tycoon. The latest is an analytical piece from entrepreneur Harold Christopher Burger who looked into bitcoin’s natural long-term power-law corridor of growth.

Speaker Dao Zhou laments his recent frustration at waiting in a long line at a bar, and points to the Cashbar app as a solution. (photo by @kilrcola)

Bitcoin continues to set new records for dominance, as altcoins fall behind. On Thursday, BTC eked out a slight 0.37% price gain over the day before. But most altcoins continued the trend of two-to-three percent daily losses – which means that Bitcoin is now at 71% dominance.

In a blog post dubbed “Some Thoughts On Crypto” and published on September 4, Venture Capitalist Fred Wilson, who is also the co-founder and managing partner at Union Square Ventures, expressed disapproval for Vitalik’s project. He, however, had some nice words to say about the king crypto.

This is the bigger picture, and the chances are equal in my opinion. Some indicators are pointing up while some other – down. What is for sure is since the Bitcoin dominance had broken above 70% (for the first time since March 2017), the altcoins seem more like a falling-knife than projects competing with Bitcoin.

In an interview with The Australian Financial Review, Dorsey explained how mass adoption of bitcoin and other digital assets have the potential to reshape Square's business model.

He said that aside from the current payments and money transfer focus, the company would expand into areas such as "hardware, analytics and payroll and lending". Furthermore, cryptocurrencies will enable users easier access to services. He added:

The Dow was already primed for a colossal rally on Thursday after US and Chinese officials set a date for the next round of trade war negotiations.

But when the editor of a Communist Party mouthpiece teased that he expects to see a “breakthrough” when the two economic superpowers resume negotiations in October, the stock market went absolutely berserk.