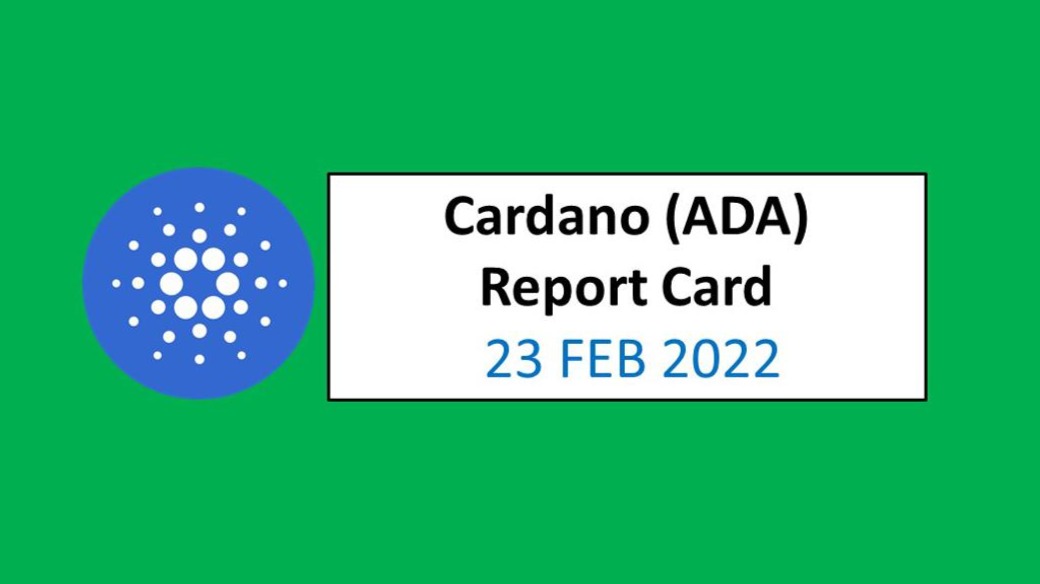 This research writing is sponsored by Multi-Chain DeFi Liquidation Tracker, a decentralized finance (DeFi) data aggregator which tracks and analyses liquidation events across DeFi protocols of various blockchains in real time. While the app is still under development, you may follow their Twitter page for daily updates of liquidation statistics and charts.

If you have no time to read through all the details, here are the main takeaways from today's writing.

-> [Technical Analysis] All technical indicators are implying that ADA was oversold.

-> [Quantitative Risk Analysis] Value-at-Risk is suggesting that ADA is trading at a similar risk level as 10 days ago.

-> On average, Cardano managed to attract 520 new Twitter followers and 178 new Reddit subscribers every day for the past 30 days.

-> A sharp drop in ADAUSDT long-short ratio was observed in the Binance futures market over the past 3 days.

1. The knowledge base for Cardano is growing: Cardano Stack Exchange graduates from Beta version (07 Feb 2022)

Cardano Stack Exchange (CSE), a community-driven knowledge base for Cardano, is now recognized by Stack Exchange as a mature learning community. CSE has graduated from its trial period – dropping the ‘Beta’ label – confirms that it has reached a critical mass of useful, decentralized knowledge. A fresh Q&A site will facilitate knowledge-sharing for all Cardano related topics.

2. How Cardano Performs Relative to Other Cryptos ? 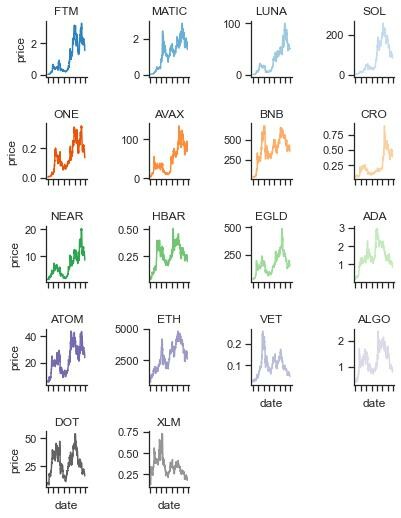 3. How Resilience Cardano Is Towards Bitcoin Crash Relative to Other Cryptos ? 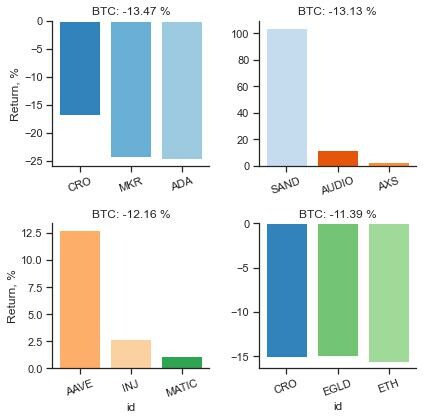 ADA has proven resilience against BTC crash in 1 out of the 4 instances.

During the last 4 BTC market crashes, 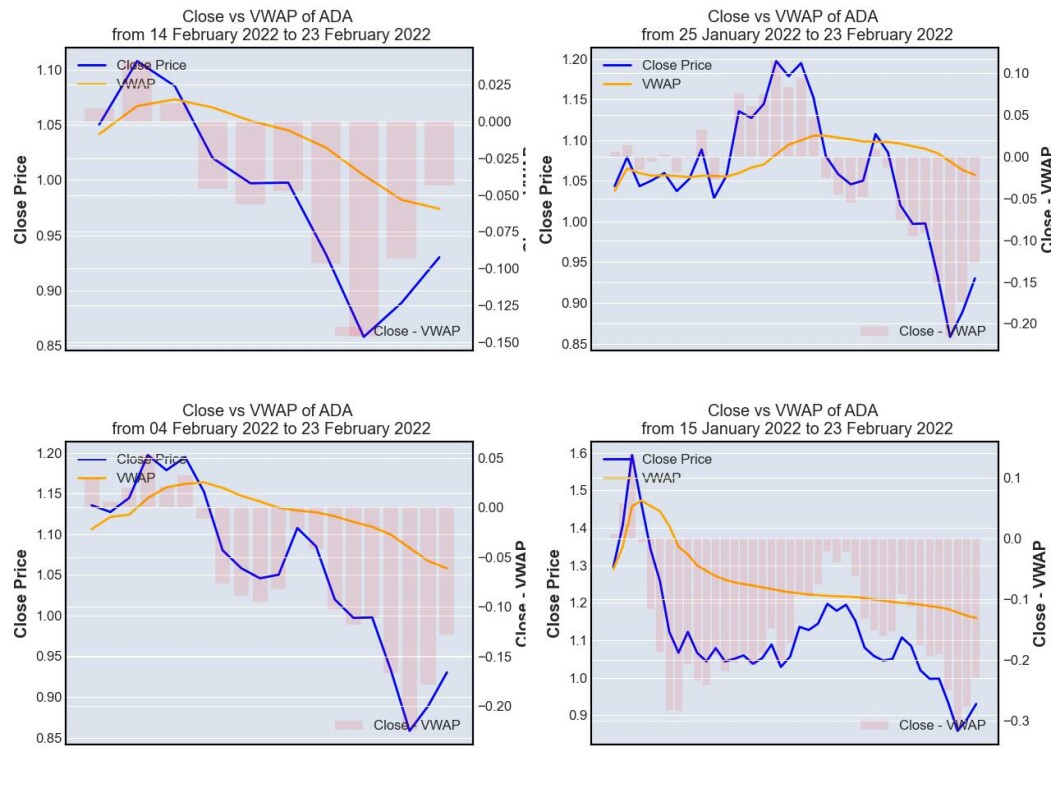 VWAP is a technical indicator used by a trader to gauge the overall trend of an asset price movement. VWAP line (orange line) represents the volume-weighted average price (average price here is defined as the average of high, low and close prices) while close price line (blue line) represents the price when ADA is closed at the end of every single day.

Whenever blue line (close price) is above orange line (VWAP), it indicates that the asset is gaining momentum and being traded higher than its average price level. This would represent a 'buy' opportunity for short-term momentum trader whom task is to trade following the trend while a longer term mean-revision trader might take it as a 'sell' opportunity, anticipating that the price of ADA (blue line) to fall to its average level (orange line).

Whenever blue line (close price) is below orange line (VWAP), it indicates that the asset is losing momentum and being traded lower than its average price level. This would represent a 'sell' opportunity for short-term momentum trader whom task is to trade following the trend while a longer term mean-revision trader might take it as a 'buy' opportunity, anticipating that the price of ADA (blue line) to rise to its average level (orange line).

As of 22 Feb 2022, VWAP is suggesting that ADA  is now trending downward and is currently trading at a price that is way below its week-long and month-long volume weighted averages. 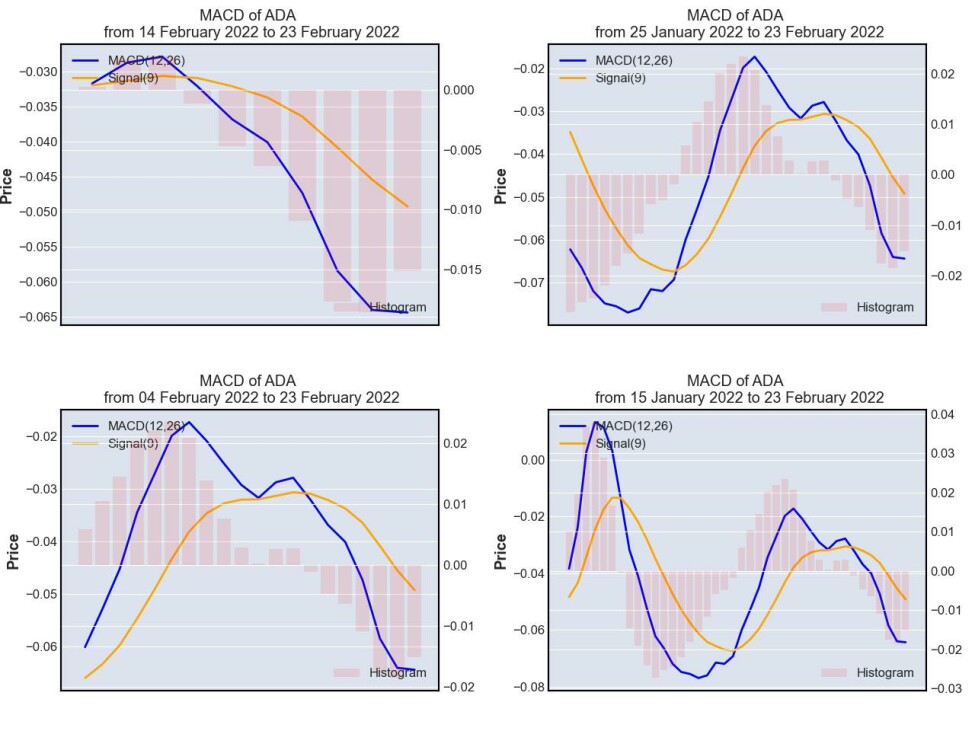 As of 22 Feb 2022, MACD is suggesting that ADA is losing its momentum as it enters a bear market. 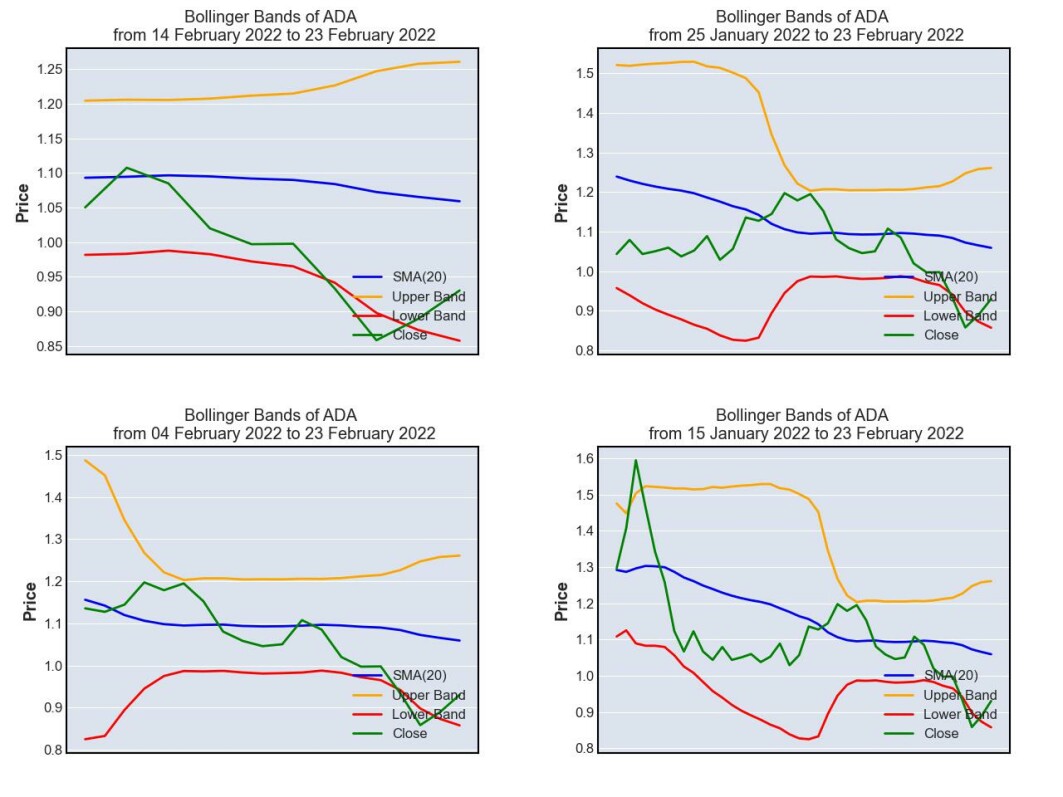 As of 22 Feb 2022, Bollinger Band is suggesting that ADA was massively oversold to the extent that it has crossed the lower band which often served as an undervalued technical threshold just few days ago. 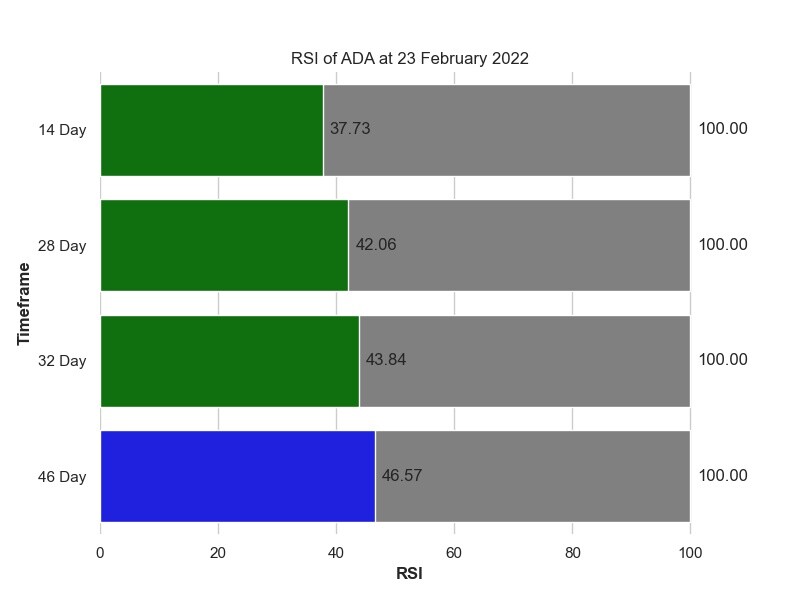 As of 22 Feb 2022, RSI is suggesting that ADA is oversold across all moving average windows. 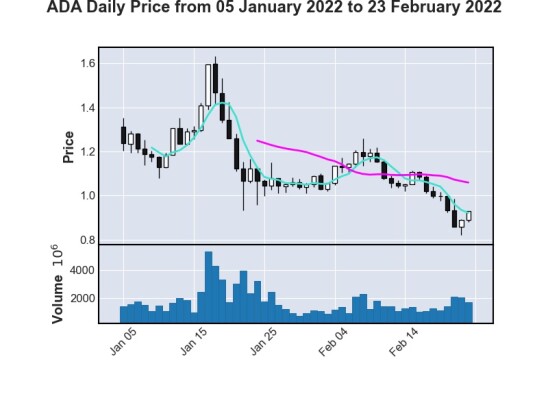 ADA trading volumes are depleting as it enters a bear market.

Based on the technical analysis presented above, quantdoge is neutral on ADA in the short run, but I could be wrong, hence please make your careful due diligence before making any financial decision. 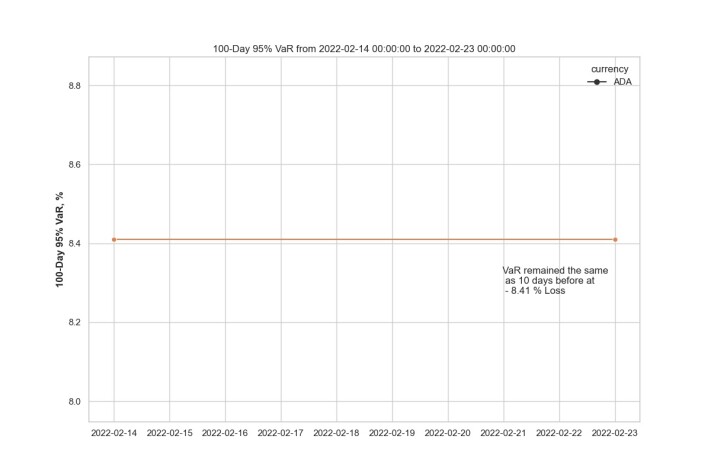 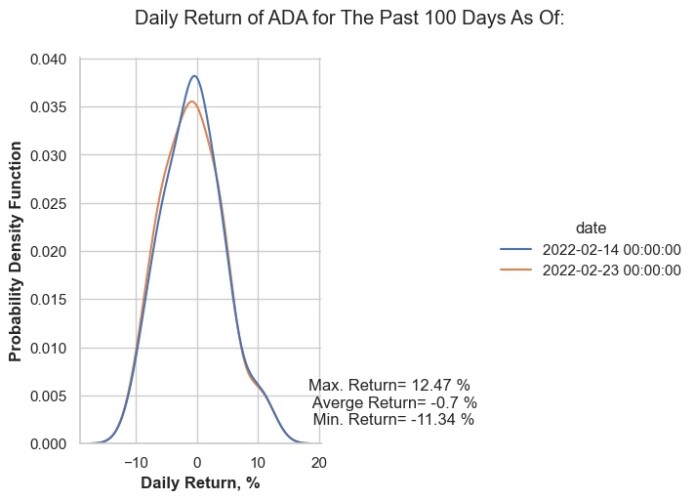 Based on the 100-day 95% historical Value-at-Risk (VaR) profile of Cardano defined above, ADA seems to trade at a similar risk level on 22 Feb 2022 as compared to 10 days before on 12 Feb 2022, with its biggest pullback being seen at -11.34% on a single day during the last 100 days. However, I could be wrong, hence please make your careful due diligence before making any financial decision.

Number of ADA Followers In The Past 24 Months 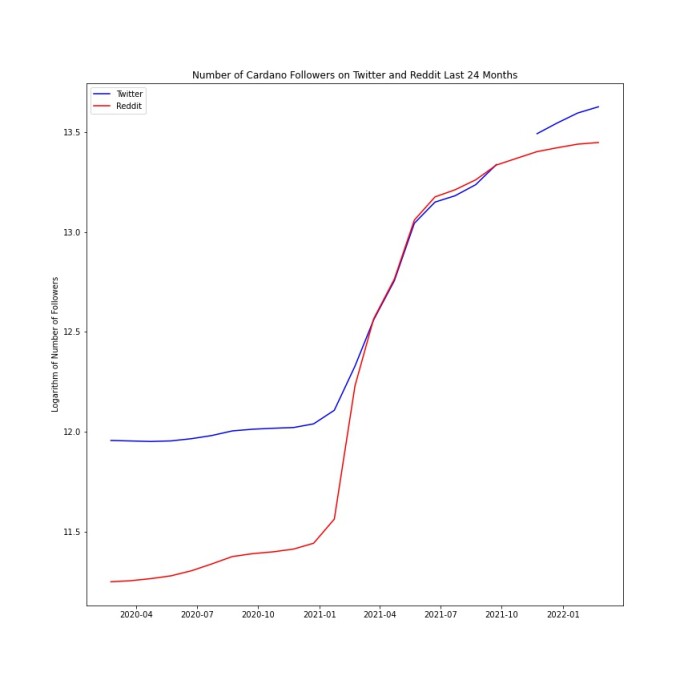 Number of ADA Followers In The Last 30 Days 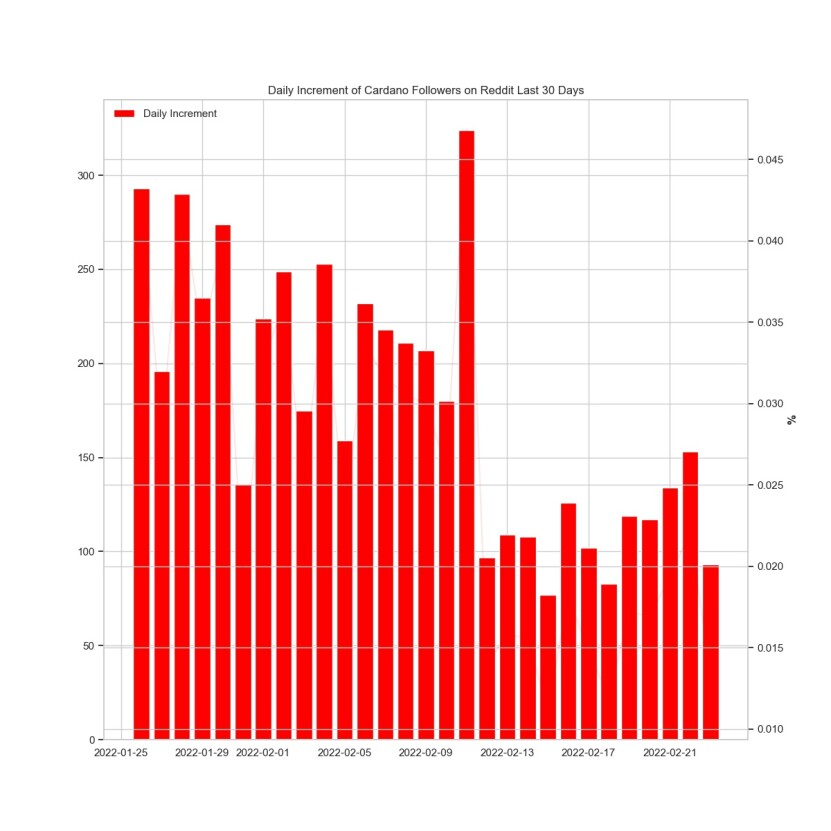 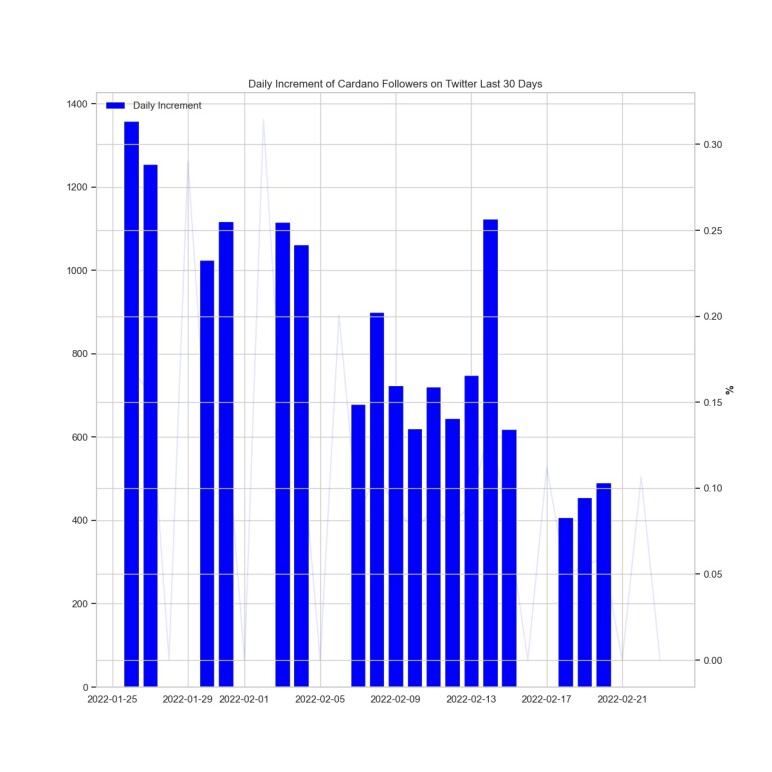 On average, Cardano managed to attract 520 new Twitter followers and 178 new Reddit subscribers every day for the past 30 days. 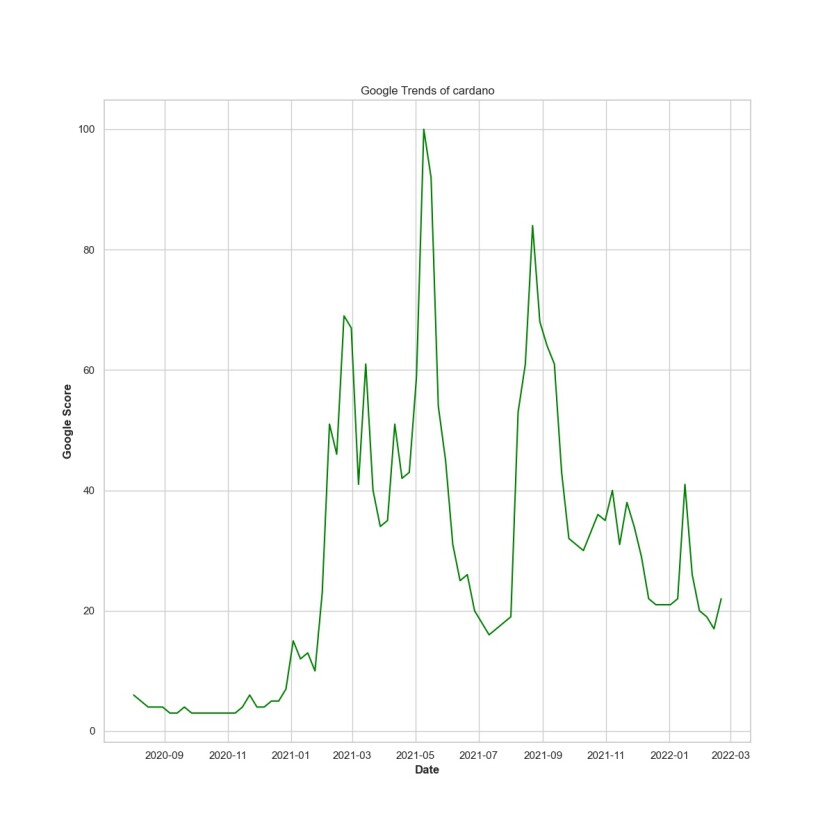 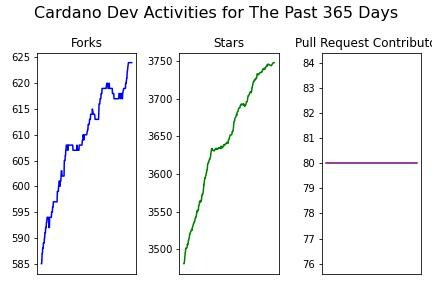 Cardano pull request contributors remain stagnant at 80 over the past year. 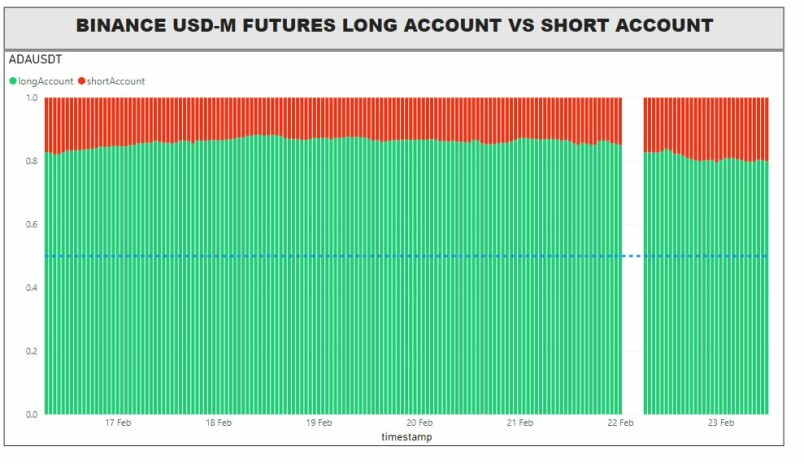 ADAUSDT futures have relatively more buyers than the sellers in this month of February. 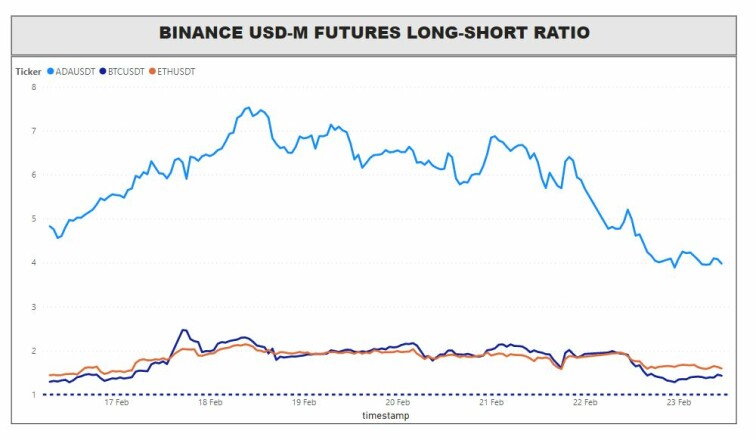 ADAUSDT long-short ratios remain consistently higher than BTCUSDT and ETHUSDT futures. However, after 18 Feb, a lot of ADA long traders are exiting their positions while ADA short traders are building up their short positions fast, exerting a great selling pressure on ADA, hence resulting a sharp drop in its long-short ratio over the past 3 days. Please take note that this long-short ratio is simply just dividing the number of accounts who are long by the number of accounts who are short, without taking any buy/ sell volume into consideration. 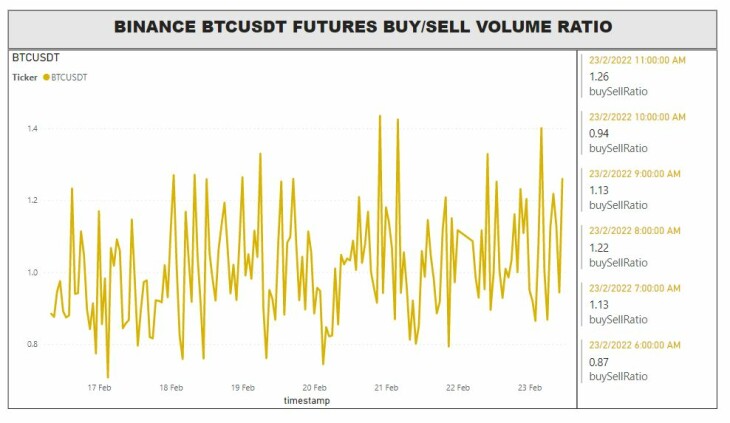 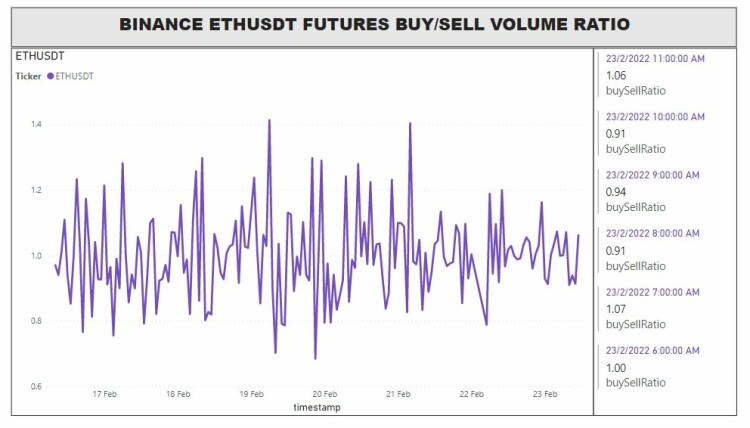 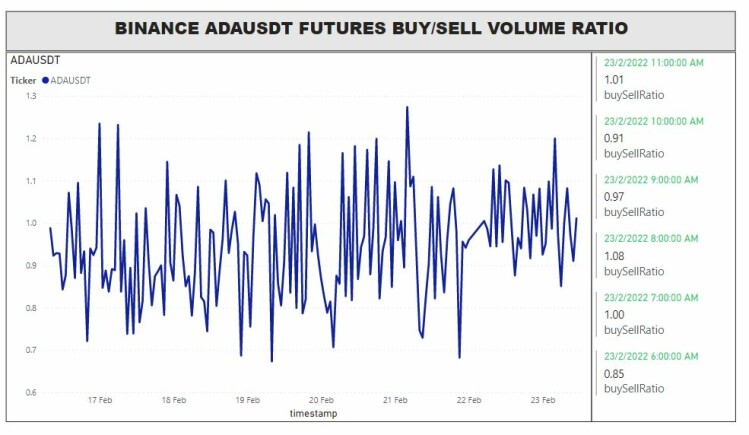 At the time of writing, bulls are back in control as crypto futures market regained buy volumes. However, despite the bullish sentiment that BTC and ETH offers, ADAUSDT futures were trading sideways over the past hours.