4 Crypto MOON Things You Might Have Missed in May 2020
Guess AMPL Rebase Twitter Competition - $200 in AMPL Rewards! Details HERE. 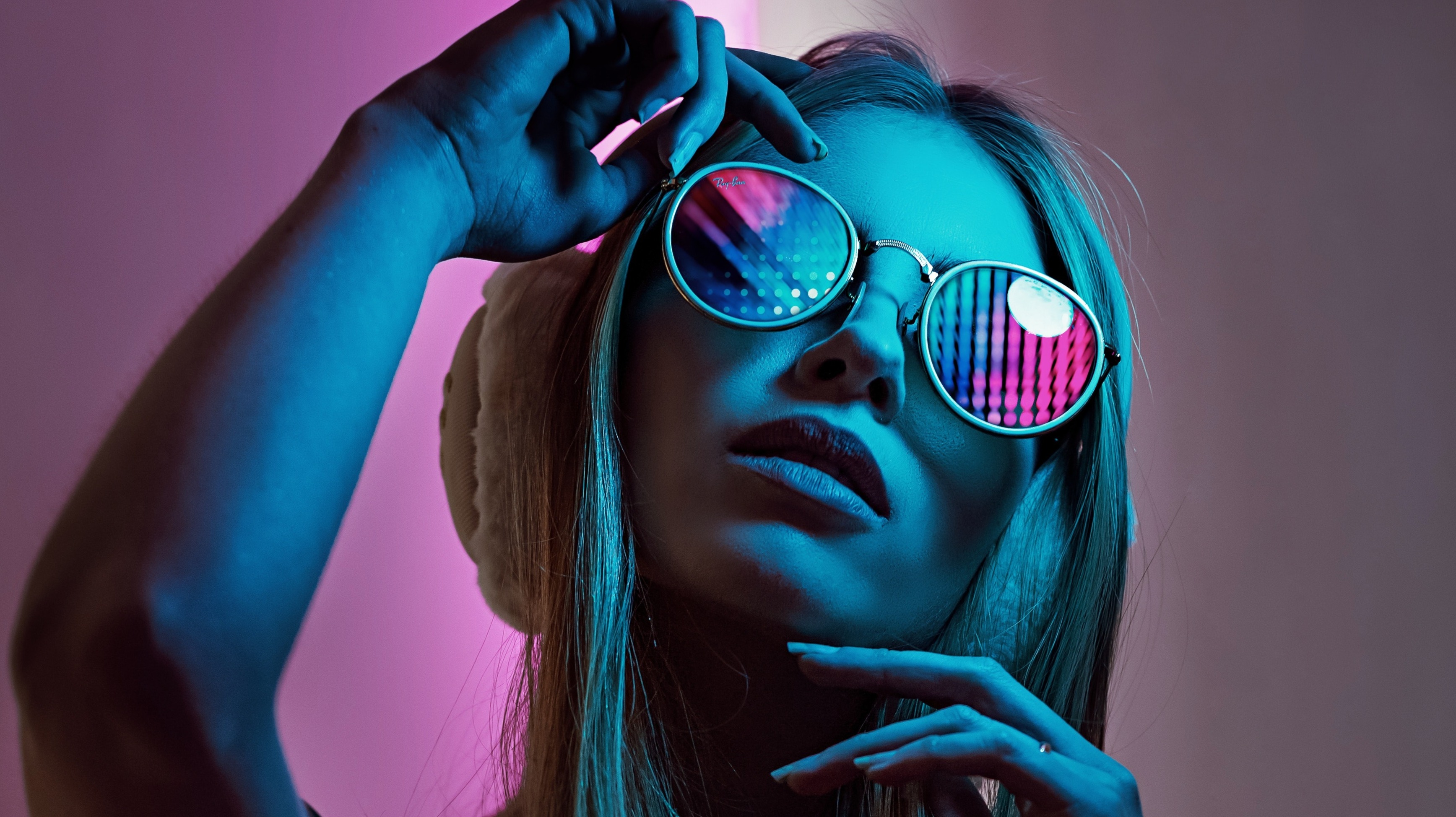 Well, it has been a while since I have posted anything here because I needed a little break from all of the crypto madness. Nevertheless, I am back and will start posting things once in a while for you guys seeing as you do like to read my posts!

There was an exciting buzz within the crypto space during May 2020 due to the Bitcoin Block Halving that happened at the start of the month. Well, during that time, most of the top news spots were focused on the actual halving itself, and, therefore, you might have missed some other top news in altcoins as they could not compete for the exposure against the Block Halving.

So, now that I managed to grab your attention with that lady in the featured image -  here are 4 cryptocurrencies that have started to make their way toward the Moon that you might have missed in May 2020. 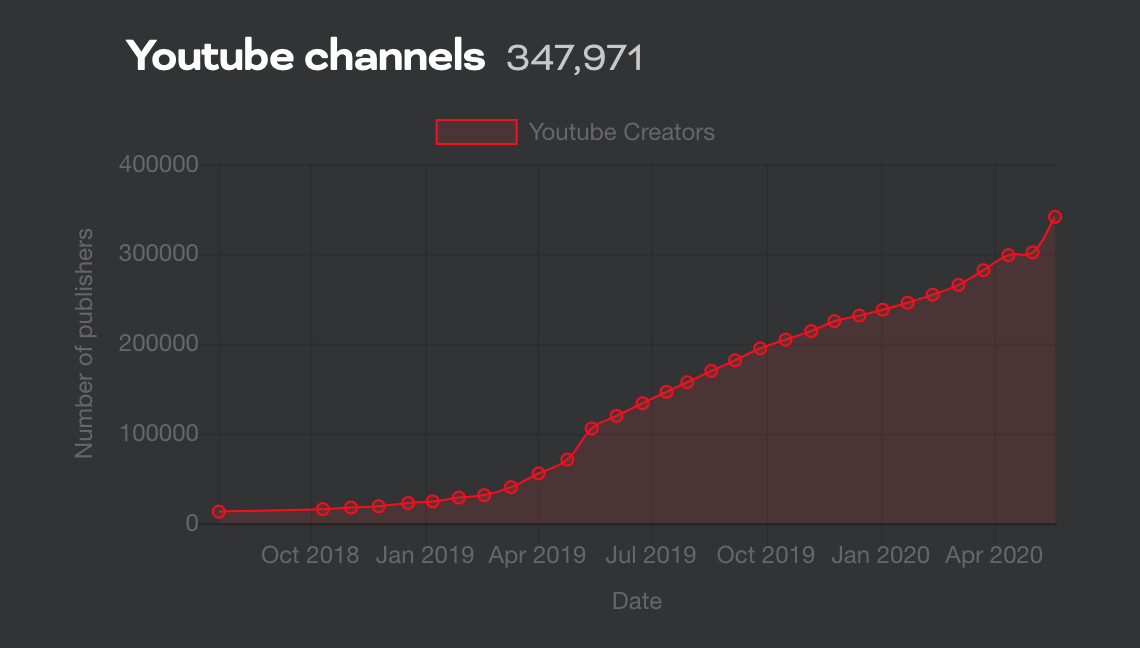 The number of websites that have verified themselves as Brave Publishers has also increased by a total of 9.3% since the start of May as it climbed from 48,383 to reach the current level at 52,908; 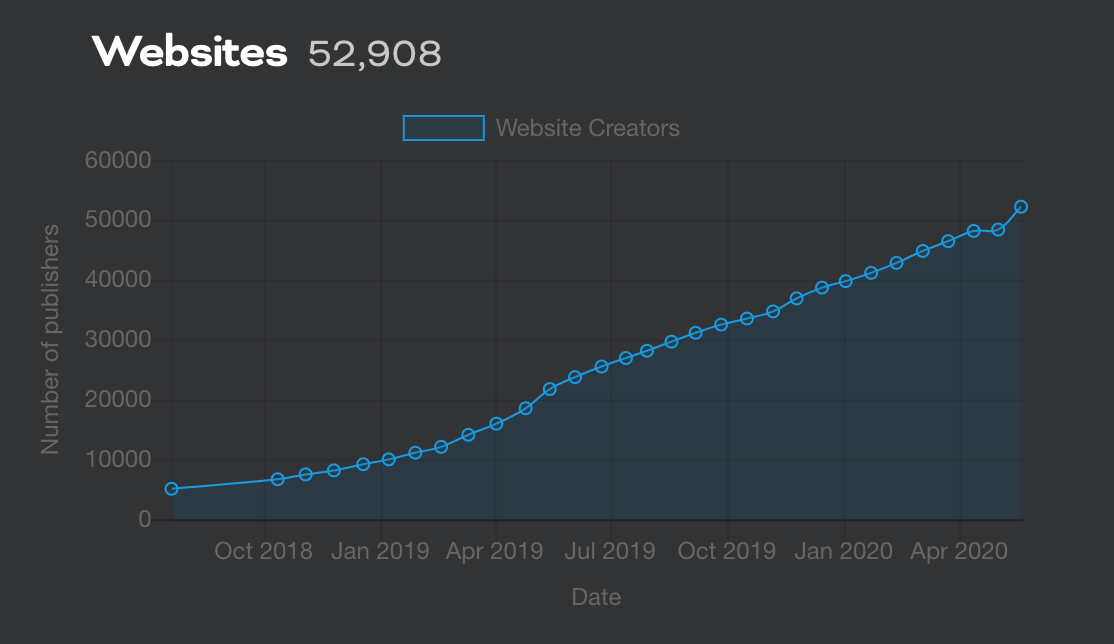 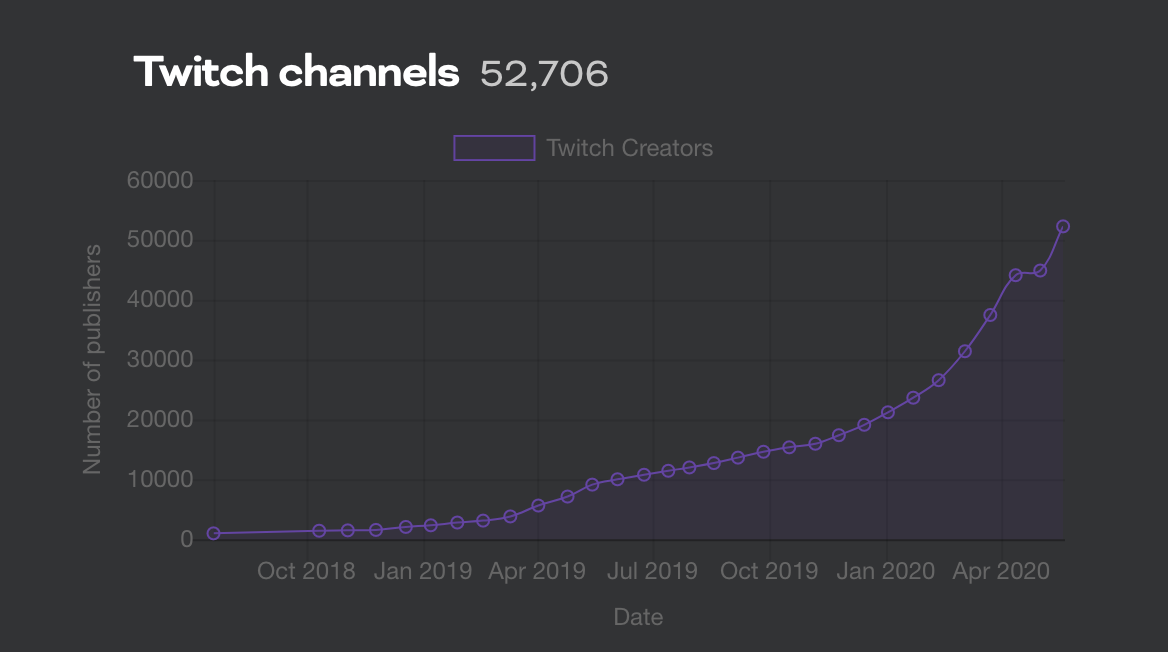 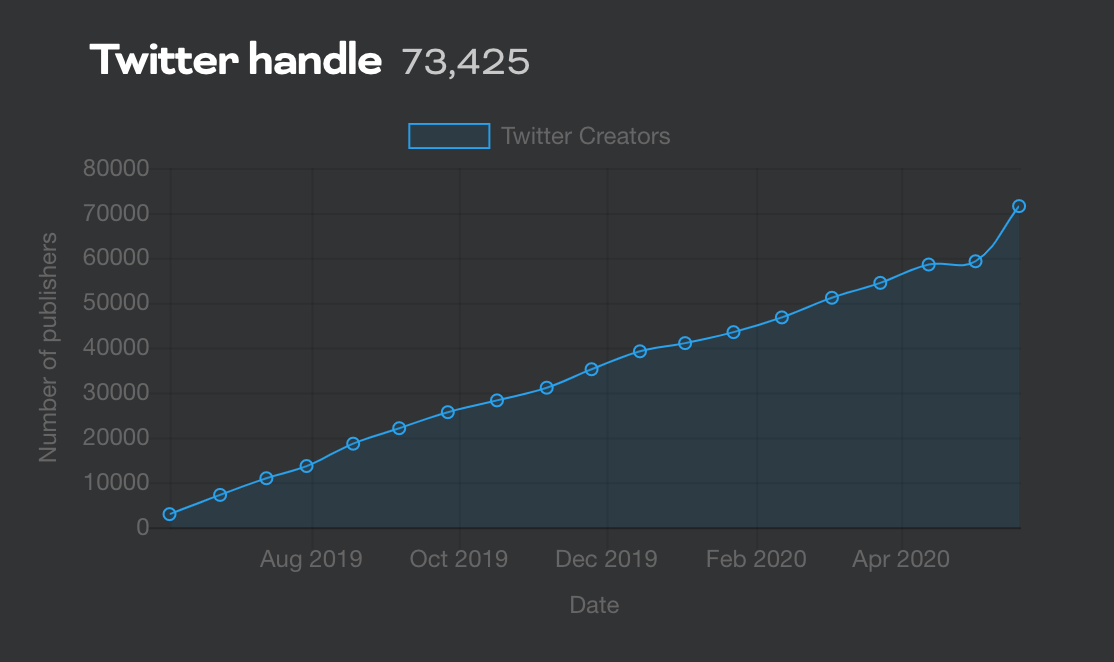 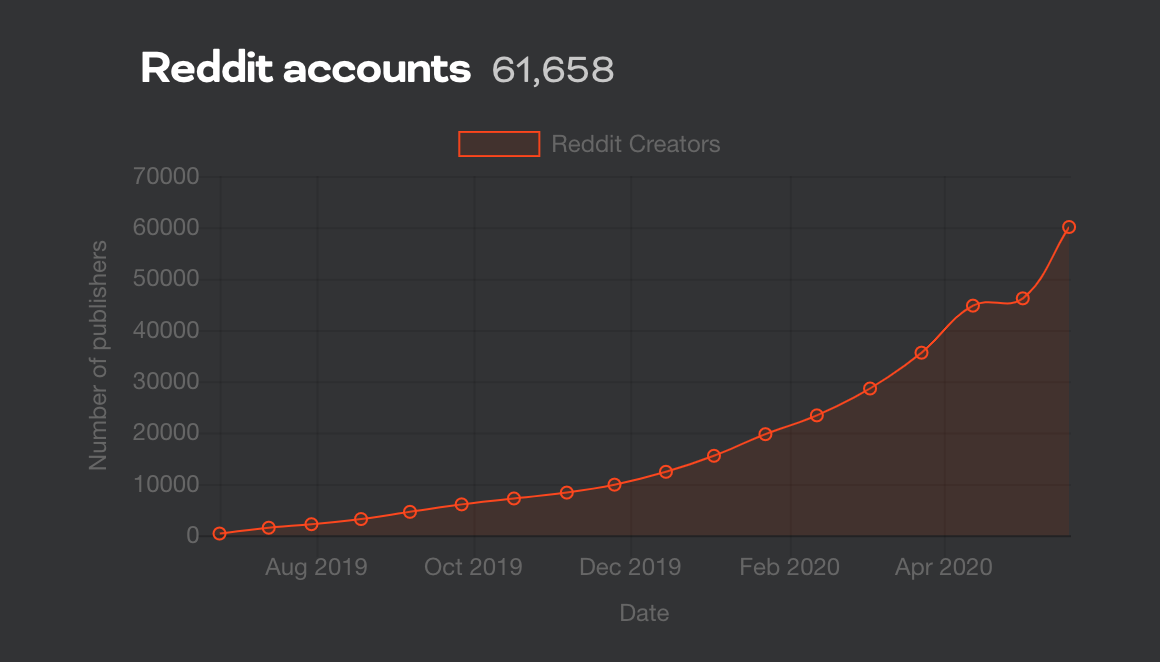 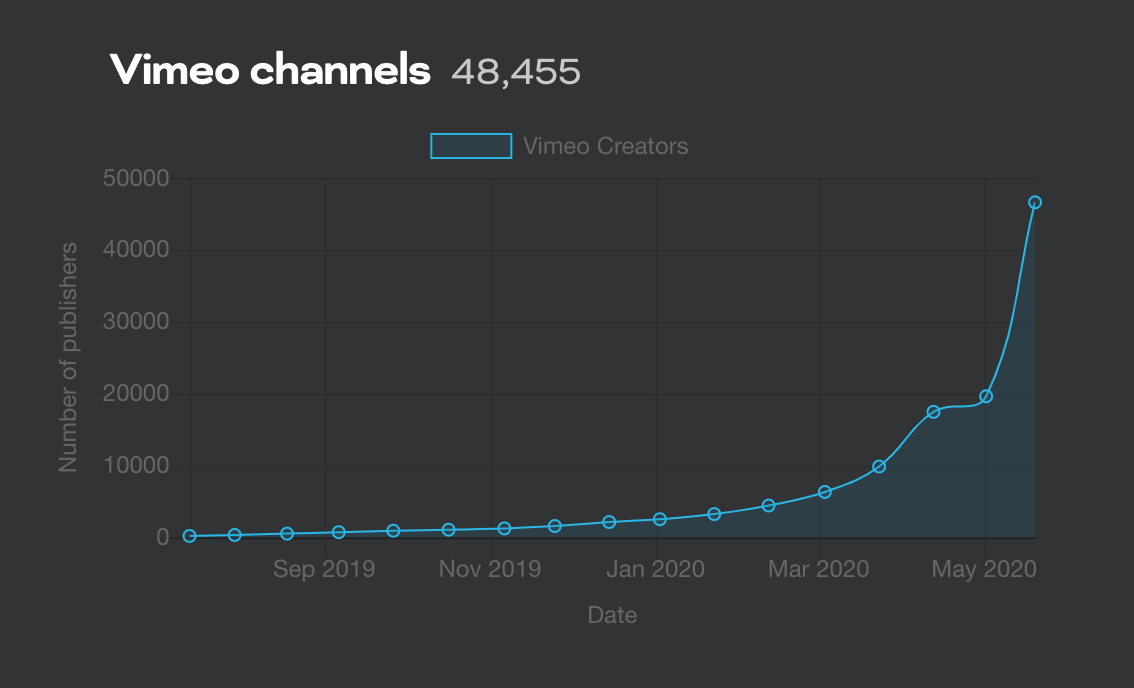 As you can see, the entire Brave ecosystem as seen some enormous leaps in growth this month as more users are starting to join the platform. This shows that Brave is still on the rise whilst it continues to onboard new users to its platform.

This can be seen as a great leading indicator for the incoming price increase that we should expect to see with BAT after the number of verified publishers climbs so mich in just one month.

The number of users on Brave might have been increasing due to the fact that the Bitcoin Block halving happened this month. Typically, during Block Halvings, there are more eyes on the Bitcoin network. These new eyes always tend to look for other altcoins to keep their eyes on at the same time and BAT/Brave is one of the leading projects out there with a fully working product.
Once users realize they can earn rewards for posting content on their social accounts, they tend to gravitate toward signing up and this might have been the reason for the big increase in publishers that we have seen this month.

Additionally, Brave is starting to attract some of the big players within the industry to advertise on their browser.

For example, Tezos and CoinList have already taken some major spots in the “new tabs” page of the browser to increase their own exposure;

It was quite fun seeing LRC being integrated into the Publish0x platform in the last few weeks. LRC is still around as one of the 3 tipping tokens on this platform. Considering the fact that Vitalik Buterin, co-founder of Ethereum, can’t seem to stop talking about it himself - LRC is a great addition to the tipping coins on Publish0x.

Vitalik has been pretty vocal about his praises for Loopring in the past. He even mentioned it as one of the projects that he believes will push Ethereum forward after mentioning it in his list of projects that Ethereum has in 2020 that it did not have in 2017;

As of recently, he is back at it again when he applauded the fact that with Loopring’s zK-Rollups, we can reach over 1000 transactions-per-second even without sharding enabled. Furthermore, he stated that with sharding and Rollups together, the TPS multiplies at a higher rate. Vitalik did have to step in and reply to a troll who stated that “ETH 2 does not exist”. Vitalik responded by showing that zK-Rollups are already in action on Loopring to silence any critics;

I have seen some comments on Publish0x where people have stated that they find Loopring quite hard to use. Additionally, they are also asking why anybody would even want to use Loopring when there are much easier exchanges to use out there, such as Binance.

It is mportant to distinguish the fact that Binance is a centralized exchange whilst Loopring is a Decentralized Exchange (DEX). When you trade on a DEX, your funds remain your own - as it should be. Nobody can steal or freeze your own money because it remains in your wallet, in your control, throughout the entire trading process. This is the biggest advantage of Loopring.

You see, with Binance, when you make a deposit into any of the wallets on there to fund your account, you are basically handing over the custody of your coins to Binance themselves and you have to be able to trust them. If Binance gets hacked, you’ve lost your coins. Another scenario is when Binance suspects you of doing something against their Terms of Service - they can freeze your coins without any notification.

With Loopring, you are protected from any of these problems ever occurring. Your coins will always remain in your own custody and nobody can ever take them away from you - keeping in-line with the entire ethos of decentralized magic crypto monies.

There are plenty of other factors why crypto needs DEXs, but I'll leave that for another post of mine.

3. Kyber Network Crosses $1B in Volume

This is an incredibly important milestone for a project like Kyber Network to reach this Unicron type volume as it proves that their protocol does actually work very well and that people are keen on using it. It also is a great indicator to show how much volume is actually passing through projects that aren’t totally bound to the price of Bitcoin.

The Kyber Network is a project that allows users to easily swap between cryptocurrency tokens. It is a very easy-to-use platform in which pretty much anybody would be able to swap any ERC-20 token such as ETH, LINK or DAI. Test it by yourself here.

Kyber Network does have its place in the world. Of course, there are platforms like Binance where you can sign up, make a deposit, wait for the confirmations, place an order, wait for the order to be filled, then withdraw your new coins, and wait for the withdrawal to occur. Then there are options like Loopring, where you don’t need to pass a KYC process and can instantly start placing orders for trades to be filled.

However, Kyber Network is slightly different.

You see, Kyber Network is a place for you to instantly swap your coins without having to go through the painful process of signing up to exchanges, making deposits, and placing orders. Imagine you were on holiday in Thailand and you wanted to convert your USD into THB (Thai Bhat). Would you sign up for a FOREX company and wait for your USD/THB orders to be filled and then wait another day for the funds to be transferred to your account in order for you to start spending on your holiday?

If the answer is yes, then all power to you - but you should have done all of that before boarding the plane.

Instead, you would go to a currency converter and pretty much instantly swap your USD for THB whilst paying a little conversion fee.

This is pretty much what Kyber Network is. It is the currency changing shop for cryptocurrencies. You come, you swap your BTC for ETH (or whatever you wanted to swap) and you leave. It is as simple as ABC.

Lastly, I want to talk about the decentralized video sharing platform, THETA - because it literally has mooned. In the last 30-days alone it has increased by a whopping 215% to climb above the $0.3 level!! 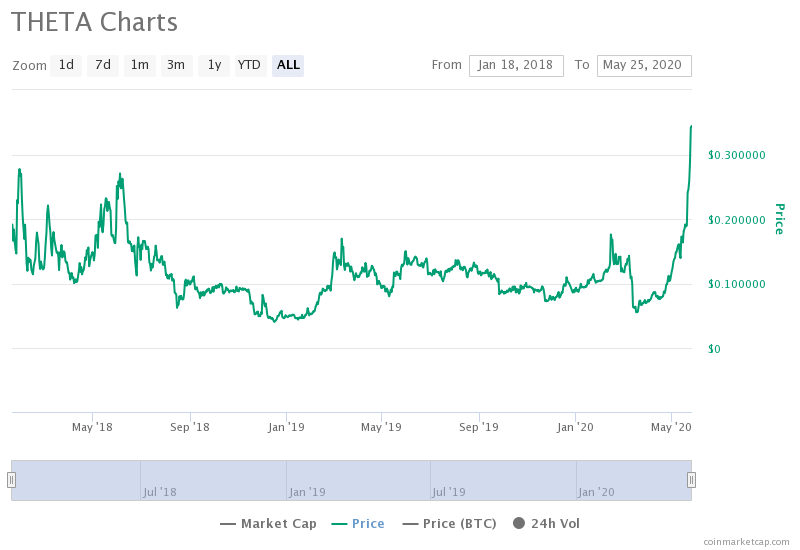 This price surge has now allowed THETA to create a fresh all-time high value after surpassing the previous ATH from February 2018 at around $0.28.

It is not just the actually THETA token that has surged. The THETA Gas token, called TFUEL, also managed to increase by an enormous 980% over the past month alone as it rises back toward the $0.2 level; 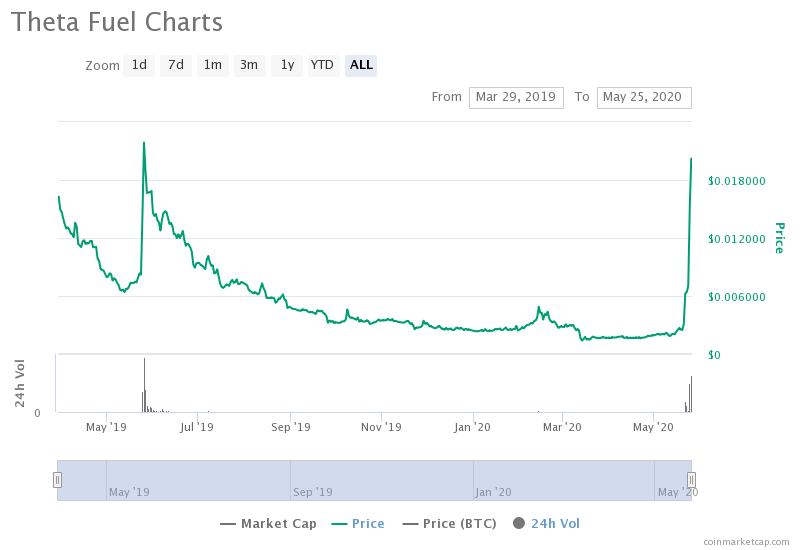 The fact that both these tokens are pretty much on a rocket ship really shows how quickly the THETA network is growing.

It is largely due to the fact that the THETA 2.0 upgrade is expected toward the end of May 2020. Theta 2.0 is expected to see some great technical improvements in the protocol that introduces staking to the Theta community. Theta 2.0 will also introduce the novel Multi-BFT consensus mechanism and will also allow the community-run Guardian nodes to take a direct role in the block production to create a second layer of security after the Validator Nodes produce each block. This makes sure that no single entity will ever control the majority of the staked coins on the THETA network.

Binance actually recently announced that they would be supporting the THETA 2.0 upgrade on their exchange;

In addition to this, there have been some amazing partnership developments for THETA.

Recently, Theta announced that the upcoming Falcon 9 mission will be live streamed at their network. Which is great, but keep in mind that there is no direct partnership between both.

Furthermore, news has been revealed that Theta.tv will actually be integrated into tens of millions of Samsung Galaxy Phones through an alliance with Samsung.

This is a huge mainstream breakthrough for THETA as streams from Theta.tv are expected to be embedded into the Samsung Daily interface that comes pre-installed on all new Samsung Galaxy devices.

This is HUGE news for THETA as it will give Samsung Galaxy S9 models and newer ones the opportunity to earn TFUEL by watching and sharing the streams. 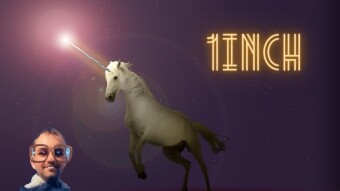 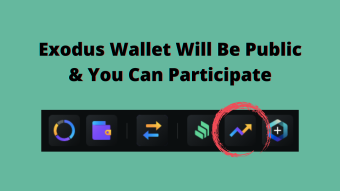 Exodus Wallet is Going Public and You Can Participate