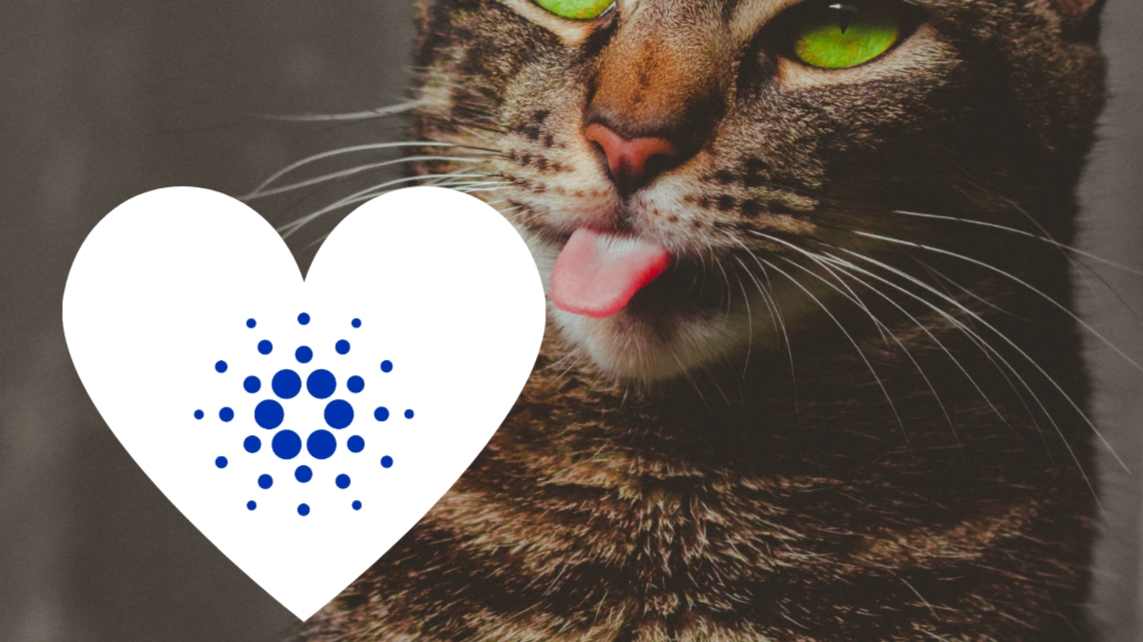 The seduction of Cryptokitten by Don Juan Cardano

Scene opens, my last post. In the comments section

No love for Cardano? @cryptoscrimper  asked.

I don't know it, yet, I said. Maybe I should look it up, for homework, I said.

I was trying to make a joke.

But then my weirdo Aspie crap kicked in, and I-have-to-do-what-I-promised, so here, my friend, @cryptoscrimper, is the lurid tale of me and the ever-suave Cardano.

(With still big love for @Sugarfix who pointed out below, in comments, I mixed up these brilliant gentlefolk.

Mea culpa. My brains are scrambled from wildfire smoke Both scrimper and sugar are amazing and you should follow both asap.)

I went to the home page to find out. What a sweet talker.

Right there, front and center:

Cardano is a blockchain platform for changemakers, innovators, and visionaries, with the tools and technologies required to create possibility for the many, as well as the few, and bring about positive global change.

How can I argue? I can't argue. My guard is down. I love positive global change. I'm into it. I'm interested.

We strive to deliver positive global change and, together, with our partners, power a new age of possibility.

Cardano began with a vision of a world without intermediaries, in which power is not controlled by an accountable few, but by the empowered many.

Jeebus crow. My goblin heart is melting re: empowerment.

Societies are able to pursue true democracy: self-governing, fair, and accountable. It is a world made possible by Cardano.

Slow it down, Cardano. I don't put out the first time I'm on your homepage. Wait til you've make it to bookmarks...but do tell me more about my eyes, as pools of "scientific philosophy and a research-first driven…"

Wait. No, seriously. Come on, Cardano, what do you do?

[I'm a]...fully open source project that aims to deliver an inclusive, fair, and resilient infrastructure for financial and social applications on a global scale.

"Did I mention, my dear, my native cryptocurrency, ADA, is named after Ada Lovelace, a 19th-century writer and mathematician who has been referred to as the world’s first computer programmer..."

But seriously. Seriously. WTF are you?

To get a grip, I had to step away from sexy Cardano's page and ask its friends, Cointelegraph and Bitdegree.

They talked to me straight.

So. Cardanao is a blockchain platform kinda like Ethereum and Tezos, that uses smart contracts. Cardano is the platform (for transactions and dApps), while Ada, indeed named for Lovelace, is the token/currency.

It's Proof of Stake, which I've praised already, and has its own consensus algorithm, called Ouroboros.

But it does things a little differently, by relying on, basically, a lot of paperwork -- academic, peer-reviewed papers which map out theoretical procedures before they're implemented...rather than the build-then-scale model* common in other projects.

* To be fair, this model is how most software, at least on, say, an enterprise level size, gets built. Products need to be released in the marketplace, and there is often a rush to be first to market, so release-then-iterate is a pretty common paradigm, especially for developers who cut their teeth in corporate. Most enterprise size projects don't have the luxury of academia, where they can go through iteration before release.

Because of this, Cardano's map is...well, really elegantly planned (imho), with layers which have different operative functions** and a modular shape (which is easier to scale).

** from what I understand, the two layers correspond to currency and platform: there's a settlement layer, which is the one which allows Ada to be given and recieved, and a computation layer, where the contracts and dApps exist.

Thanks, Cointelegraph and Bitdegree. Things are making sense.

So, do I have love for Cardano?

Some of Cardano's functionality remains on paper. It's not yet operating at promised capacity. People, from what I've googled, still don't love the native wallet and are frustrated that there aren't, yet, wide choice of Ada-friendly wallets.

And. There's been some upset upstream, which is being heralded as an opportunity for the community to define next steps.

While I love the idea of literal consensus, I grew up American and Unitarian Universalist, and know people are messy with popular votes and quorum (that makes me sound like a fascist, lol. I am NOT).

I'm interested, but my impulse is to sit back and see how leadership shakes out.

Though I'd not kick Cardano out of bed for eating crackers. ;)

OK, thank you, my dearest readers, for allowing me to objectify crypto for the last few posts, then ride (har!) that thin, silly analogy to stupid absurdity. I promise fewer double entendres and more straightforward ridiculousness.

But tell me, have you thoughts on Cardano?