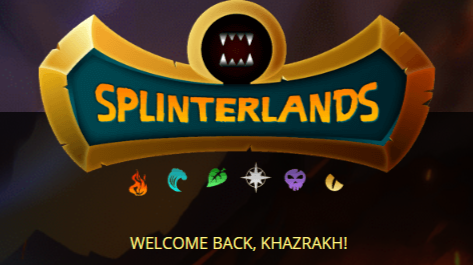 What a crazy week this has been. While Bitcoin managed a new all time high without going much higher, things are spiraling out of control left and right. I've had my best week in terms of referral rewards by far, Alien Worlds entered full FOMO mode, and a lot more. I've been having some internet issues during the week which forced me to work from the office again. Because of that, I had a little less time for my crypto hustle than I had hoped for but I still got a lot of stuff done and have a lot of progress to report this week. I had planned to do my Splinterlands report card yesterday evening but it seems to be bugged for me, getting stuck on the tournament report. But before we get into any more detail, let's take a look at my token progress first: 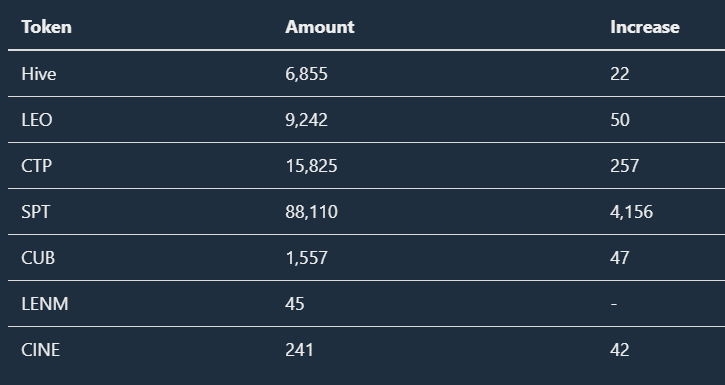 As I had hoped, token gain has picked up across the board thanks to me being more active throughout the week again. If you add up these numbers and add monetary value to them, you'll come to the realization that I'm making several hundred dollars with these tokens alone. So if I put everything together, my monthly crypto earnings are now already in the four digits area. Considering that my plan (well, hope) is to be able to retire off crypto in 2025 at the earliest, I'd say things are already going pretty damn well on that end!

Now let's have a look at my different projects.

To nobody's surprise, we are starting with Splinterlands once more. There's a lot of stuff to cover here but most importantly, this week has been total bonkers in terms of referral earnings. I've been casually sharing my ref link ever since I've started playing the game. For a long time, this netted me the occasional 500 credits when somebody bought a spellbook. In recent weeks, though, there's a constant income stream of fresh credits coming my way. Here's a picture from just last night:

Some of my refs are spending hundreds of dollars on land and booster packs at the moment. This allowed me to build my collection a lot faster than what would have otherwise been possible. This week, I've maxed Mother Khala, another of the Untamed Summoners that I was still missing and the Undead Archer, another rare Death monster from Untamed. I still have some ground to cover, but I'm cautiously optimistic that I should be able to manage a complete max level collection of all Untamed cards before Chaos Legion gets released - I never thought that would be possible some months ago but it's happening!

I've also had a super smooth season and managed to climb the ladder without too many issues. I've reached Champion I on the last day and decided to let it sit there as this was enough to rank in the top 50. This netted me another 10 Untamed booster packs and was now the third time in a row that I managed to end the season in the winning ranks. I might try to compete for a higher rank next season but to do so I need to get to Champion I a day or two earlier so I have still some time in case things go wrong. I also don't want to battle too much on the last day as this means that my DEC capture rate will be too low for the begin of the next season and I'm thus missing out on a lot of potential DEC because of that.

I've also been playing in all Brawls for my guild so far and after some initial issues with getting used to the format I feel like I've gotten pretty good at Untamed only Novice now. I've managed a 5-1 last Brawl and am now sitting at 6-0 with 2 battles not resolved yet. The last two Brawls were real nail-biters for us as well but in the end, we've managed to win each of it so far. This Brawl, we are competing with Legendary Dragons (who are the #2 guild behind us). So far it's looking great, but I expect another close finish. Brawls have been so much fun so far and I really can't wait to see the exciting stuff that's going to be added later on!

All things considered, Splinterlands is just killing it and I couldn't be more bullish at the moment. Yabapmatt also hinted at another huge announcement of an announcement that could potentially come this week. I have no idea at all what to expect but he seemed to be pretty excited about it, so let's just wait and see!

I have no other way to put it other than people are going completely crazy over Alien Worlds. I've already made an article covering the whole craze that's going on out there. Ever since TLM got tradable on Binance, the price of all NFTs in the game has gone completely through the roof. While I sadly had already sold all my TLM before the Binance announcement, I've still already made more than thousand dollars selling my Alien Worlds NFTs. I still have more than hundred staked on R-Planet and I intend to list them all during the weekend.

These prices are so out of touch with reality, it's mind boggling to me. If something like that was ever to happen to Splinterlands, I'd basically be a millionaire over night. That said, I really hope it never happens in that way. This is pure FOMO going on and we all know what's coming after the dust settles. A lot of people will loose a lot of money in the process and I'm not sure how well Alien Worlds will do after that. I'm quite hopeful for the project, but there will be a lot of disgruntled investors in a few weeks from now...

Some big news for eXode as well this week. This weekend, maybe even as early as today, we'll see the release of the full colonization pass along with the option to declare friends, join alliances and squads. We'll also see tasks coming to the colonization pass that players will be able to fulfill in the coming days, rewarding additional ingame items. I'm not sure yet if we'll see actual colonization as well this month, but at least we'll be busy completing tasks and that alone is really cool already. Seems like we'll finally start playing eXode again and this time, it's for real!

Rising Star had the biggest addition to the game since its launch this week. Adding a second currency called STARPRO to the game which can be used to buy new NFTs called Runners with unique effects. It's a cool new Starbits sink which absolutely was needed. The price of Starbits was as low as 1 Hive per 10,000 Starbits some time ago. It has recovered a lot from there, now trading at 2.4 Hive per 10,000 Starbits again. 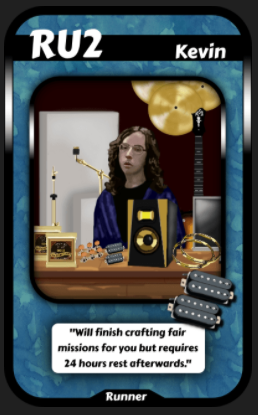 I really like these new runner cards as it's a clever and fresh effect. Sadly, it costs 1 STARPRO every time you activate them and I don't like that. It's not that I think it's bad design, it's probably even needed for balance purposes and all, but I just don't like recurring costs. So for now, I won't get these and instead just enjoy the increase of value for my Starbits.

And here we have yet another title where my referral rewards are totally crazy. I now own 285 cards in the game, that's 285$ worth of free cards right there. It seems like the game already has quite the fan base willing to invest a lot of money into these special card frames. While I don't care for them, it still allows me to get a lot of normal card frame copies. As with Alien Worlds above, if this thing goes big and any form of FOMO kicks in, I should be in for quite the treat. It's still a long wait before release so I hope to be able to build my collection even further until that happens.

And that's all from me for today. As you can see, it really was a brilliant week for me and if things go on like that, living exclusively off crypto is becoming more and more viable every day! Thank you all for reading and see you next time.