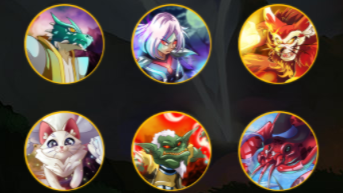 Splinterlands latest airdrop introducing Lobstradams to the game just happened and with it, we are now less than 300,000 booster packs away from the Untamed edition selling out. At a total print limit of 1,500,000 booster packs, that's now less than 20% of the total supply still available. At the speed at which the last 100,000 packs got sold (which was less than a month) it's safe to assume that we'll be sold out some time in July at the latest. It's also still pretty likely that we'll see some people FOMO a bit so I'm optimistic we might even get there as early as late June. This obviously is great news for Splinterlands but it also means that the card prices could and probably will go crazy pretty soon!

The next edition for Splinterlands, Chaos Legion, has already been announced but we didn't have any information on when to expect its release. Personally, I was expecting to have a small gap between Untamed going out of print and Chaos Legion hitting the store. I was thinking something like maybe 1 or 2 months at most. As I've learned in this Friday's AMA, though, this gap is actually going to be considerably larger than this. Yabapmatt hinted at a possible release late in the year, potential even as late as December. Now considering that Untamed might already be sold out next month, that would mean a total of 6 months without a main edition set on sale. We'd still have Dice packs and reward cards, but other than that, this means that all players looking for new cards will have to get them from the market.

At current rates, about 15,000 to 20,000 new Untamed cards are introduced to the system each day thanks to boosters being opened. Obviously, not all of these cards enter circulation and end up on the market. Many players open booster packs because they want to actually play with the cards they get. But even if they won't use them, many still don't list these cards and just hold on to them instead. Still, a considerable amount of these cards end up on the market and are bought by other players. In the last 24 hours alone more than 6,000 of these trades took place. Once the last Untamed booster pack is bought, this number is likely going to increase by quite a bit as all the players that would have opened boosters to get new cards will now have to go to the market if they hope to get new Untamed cards as well.

Most if not all Splinterlands cards already went up in value during the last few months due to increasing demand so it's safe to assume that we'll see even more price action once Untamed goes out of print. Looking at the market, the most expensive Untamed Common is already traded at 0.11$ each and liquidity on many cards is already pretty low, especially if you want to buy enough singles to get a max level copy. If you wanted to buy enough copies for a max level Serpentine Spy for example, the last copies would be 0.4$ each right now. It'll be interesting to see how long it's going to take before liquidity becomes so low that prices will go up considerably. Just look at some of the Beta cards and you know what to expect.

Now at first sight that's obviously great news for anybody holding Untamed cards as their price is almost guaranteed to go up from where we are today, but this could also turn into a real issue for Splinterlands. 6 months is a long time and if the interest in the game keeps going up as it has been doing all 2021, it'll get harder and harder for new players to get a decent deck without spending absurd amounts of money. A Champion Legaue deck will already cost you several thousand dollars right now. If these prices would double or triple, it might get to a point where the lack of new cards will actually prevent people from getting into the game. I wouldn't consider it as a given but I nevertheless hope that the Splinterlands team will closely monitor the price dynamics here.

One of the recurring questions in the AMA has been whether the game's infrastructure would be able to deal with 10 times as many players than what we have right now. In my opinion, the question also needs to be, whether the game's economy would be able to deal with that. Obviously, if card prices go up, more players will be willing to sell extra copies, but eventually they'll run dry just as well. Splinterlands has a track record of getting these things right, so I'm not to worried yet. Nevertheless, I hope they already have the potential issue on their radar.

Personally, I'm stocking up on as many Untamed cards as I can right now and while it might feel like we've already missed the best opportunity to buy more cards, the real price action is very likely to only start happening once Untamed has been out of print for some weeks. So if you have some change and feel like taking the chance, it's still an extremely good time to get more Splinterlands cards! I'll probably take some profit along the way so I can fund my buying spree for Chaos Legion cards once the next edition finally gets released.