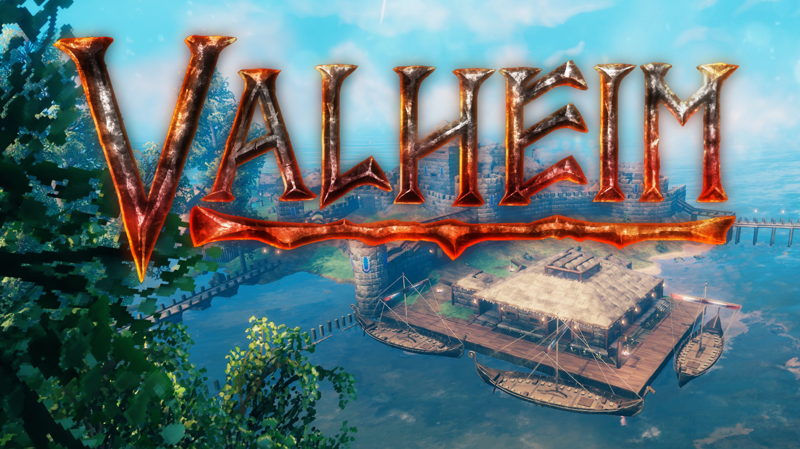 Have you played Valheim?

Valheim certainly was one of that titles that basically came out of nothing. I randomly stumbled across it on Steam back in early March when I was looking for a new multiplayer game to play with my mates. I hadn't heard about the game at all and to tell the truth, I'm not really a fan of the sandbox survival genre. I do like Vikings, though, and after watching the second trailer I was completely sold. After all, they used a song from Amon Amarth as background music and I do like me some Viking Metal. Nevertheless, I wasn't too convinced that we'd be playing it all too long. Well, what can I say? Once we fired it up for the first time, we've been playing it for 8 months straight. Two months later, we have almost 25 hours played on the title and still get back together to play even more. As indicated above, Valheim is your classic sandbox survival game with Viking flavor. You are a dead warrior sent to Valheim by Odin to rid the world of some big nasty monsters that rule over there. When the game starts, you are literally thrown to the ground in a random location with nothing on you but your undergarments. Your first priority is to gather wood and stones off the ground so you can craft some basic tools like a club or an axe. With these, you continue to gather more resources as well as food. Before the night sets in, you want to build at least a small shelter that you can stay in during the night. While you technically don't ever need to sleep in the game, there are a lot more monsters roaming the area at night. Once you've gathered enough materials you can start to build a real base, craft better weapons and armor, and start dealing with stronger opponents.

The whole game focuses strongly on that progression loop. Beating stronger monsters or mining in a more dangerous area will provide you with new materials. These will then allow you to craft better items, in turn allowing you to go to even more dangerous areas and acquiring even better crafting materials. As mentioned in the beginning, I'm usually not a big fan of mechanics like that. In Valheim, though, it's just done perfectly right. There are dozens and dozens of different materials, each allowing you to build something new and cool. There's a great balance between grinding and progress, making the game feel extremely rewarding. Personally, I never thought I'd spend an hour planting and harvesting carrots but that's exactly what I did and I hugely enjoyed it. While Valheim can be played alone, it's a lot more enjoyable when played with friends. We usually are a team of 3 or 4 vikings, each focusing on different aspects of the game. While the starting area is pretty easy and forgiving, it gets a lot harder once you move to other parts of the world. I still remember when we first encountered a troll. Those guys are like 20 times as a big as a human and when you first encounter them, they kill you with a single blow. Playing together certainly helps to deal with these kinds of monsters but it also makes collecting resources and building your base a lot more enjoyable. As you can see in the screenshot above, you can build complete settlements with a lot of variation in Valheim.

The world itself is randomly generated and it's huge, really huge. After 25 hours worth of playtime we still only explored a tiny part of the map. There are many different terrain types like meadows, forests, swamps, mountains, and so on. Each with their own art style but also their own monsters and challenges. The map is made up of larger and smaller islands and to move around you will have to build a ship eventually. The first time we set for the ocean in our viking ship really felt epic. At the same time, there was that sense of danger during the whole journey. When you die in Valheim, you respawn at your base, but you are completely naked. All items stay with your corpse and you need to get to where you died and recover everything. So if you die somewhere far away and without means of getting there again, this is going to need a lot of effort. While it's obviously not fun to die, this changes they way you play the game for the better. Instead of mindlessly charging into the unknown, you carefully plan your expeditions, always preparing for the worst. Valheim uses a pretty unique low resolution art style that doesn't look all too great close up but allows for some really amazing panorama images for anything that's a bit further away. It takes a few minutes to get used to it at first, but once you've been absorbed by the game, you'll find the art style to be absolutely gorgeous. I've spent a lot of time just strolling around our base during sunset, looking out to the ocean. When we first explored the mountains, I was blown away by how huge everything was and how far I could see from up there. The background music and ambient sound is very atmospheric as well although I wished there were some more tracks and some more variation to it. But since the game is still in Early Access, I'm quite positive we'll see more added later on.

Speaking off, when you play Valheim it's hard to believe that it was released just a few months ago and is still considered an Early Access title. The game is huge, it probably offers hundreds of hours worth of gameplay, and it's more polished and feature rich than a lot of titles even years after their release. There's a small but dedicated team working on improving the game and after they spent the first months on bugfixing, they are now working towards their first content patch. As they keep telling in their updates, they are more dedicated towards delivering quality content than they are towards delivering it in time. So new stuff takes time, but I'm quite confident that it'll be worth the wait in the end. If you are looking for a cooperative game to play with friends, there's probably not much better out there than Valheim at the moment. I foresee my mates and me playing this game for months if not years to come. It's the perfect game to start if you have some hours to kill and want to spend some quality time with friends. The game already has a crazy number of 203,569 votes on steam, 96% of which are positive. At this very moment, there are 58,365 people playing the game. The most crazy thing about all this, though, is Valheim's price tag. The game is sold at an unbelievable 16.79€, so something like 20$. For the amount of entertainment this game offers, this basically is a steal. If you like survival games, vikings, or are just looking for one of Steam's best early access titles ever, you really can't go wrong with Valheim. Just make sure to bring enough time once you launch it. Turning it off again won't be easy!