ETH update - Where does this week bring us ?

This article follows the last one : ETH - Bear run or consolidation ? 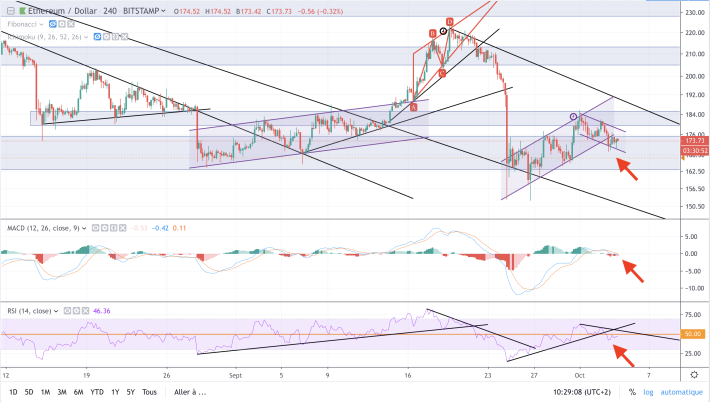 So on first, on a 4h graph, it came back testing the old trend line recently broken. It then formed an upward channel that broke before closing the next trend line (I'm sorry about my last chart as the upper trend line wasn't correctly drawn and the price seemed closer). RSI was slowly coming positive and even broke the 50 and tried to retest it.

In the last hours the graph changed its way slightly. Price broke the channel and created a new one downward before even closing the trend line. It has now rejoined the previous resistance zone. RSI is still evolving around 50 as if the decision were not taken yet if it will chose a positive or negative slope. But I'm not seeing that movement a negative sign for the moment. If we just look at the last similar pattern, RSI showed the same movements with only one difference : price didn't broke the channel. But then why no negative sign for now : 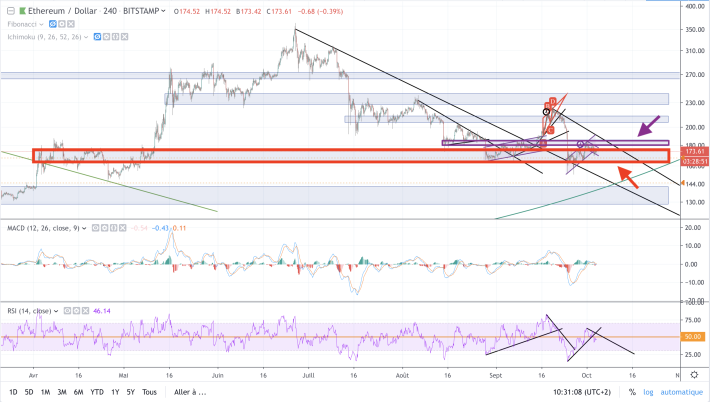 If we compare the two resistance zones it is evolving within at the moment, the upper one (purple rectangle on the graph) that it just left is a very weak and short one. Stil needs some time to get more powerful. The lower one (red rectangle) is a much more strong one with longer history. This may tell that the price is only consolidating its springboard. 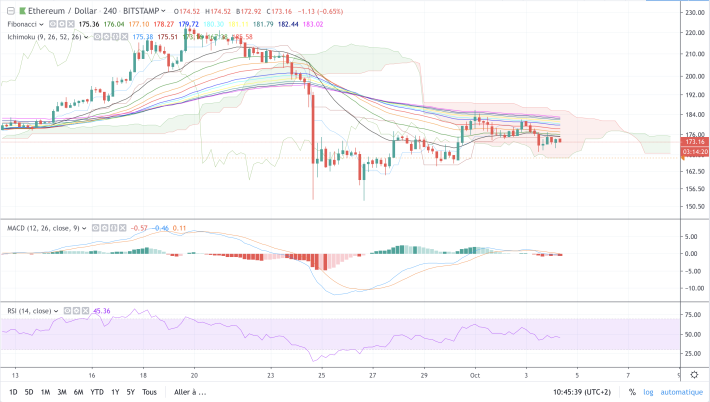 On the 4h pattern, price went in the cloud and tries to find its way within it. Let's not forget how powerful the cloud's resistance can be for the price. And about the cloud again, it operated a return move which is not indicating a new trend but a rang situation for now (SSA and SSB are flat, Shiku Span is under the cloud, price is in, Tanken and Kijun just crossed and are somehow flat also). Regarding Fibonacci's EMAs, we're assisting a shortening of the extreme width. Still not positive, but may be a sign we would like to follow carefully. 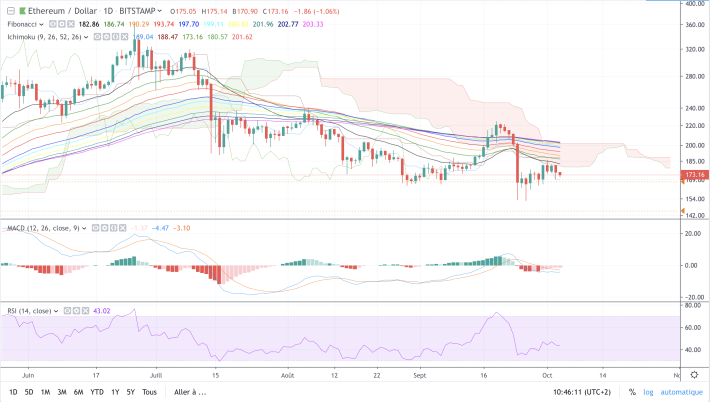 On the daily pattern, price has just touched the cloud, tried an entrance on first of October and stepped back to close under it the same day. Resistance is still very strong and it needs more time to consolidate before trying again to push up.

I'll end up this article with this daily view before the conclusion : 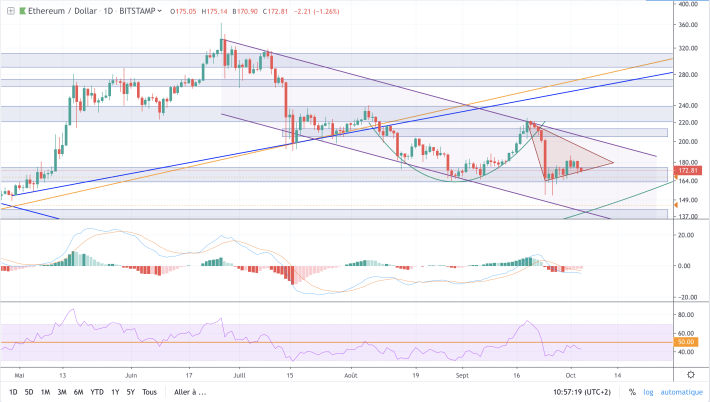 Price evolution invalidated several times the last trend lines, reason why they're not appearing here for the moment. I'll check on time from time to time to be sure they cannot be helpful. But what we can see is that the last evolutions of the price created an almost perfect downward channel. Last cup failed to close short before the last high and now we have a nice triangle formation leading the graph. Good sign is that it perfectly confirmed the channel. This may not be good news for those who want to invest long term now, but it creates a perfect border to use as signal in case of changes.

Short term (hours) : buy signal remain the same to me, the crossing of the upper trend line that would also correspond to the push up out of Ishimoku's cloud and Fibonacci's EMAs. Sell signal would be the movement under the actual resistance zone as the next one is very strong and waiting on the next wall of the daily channel (around 140 $).