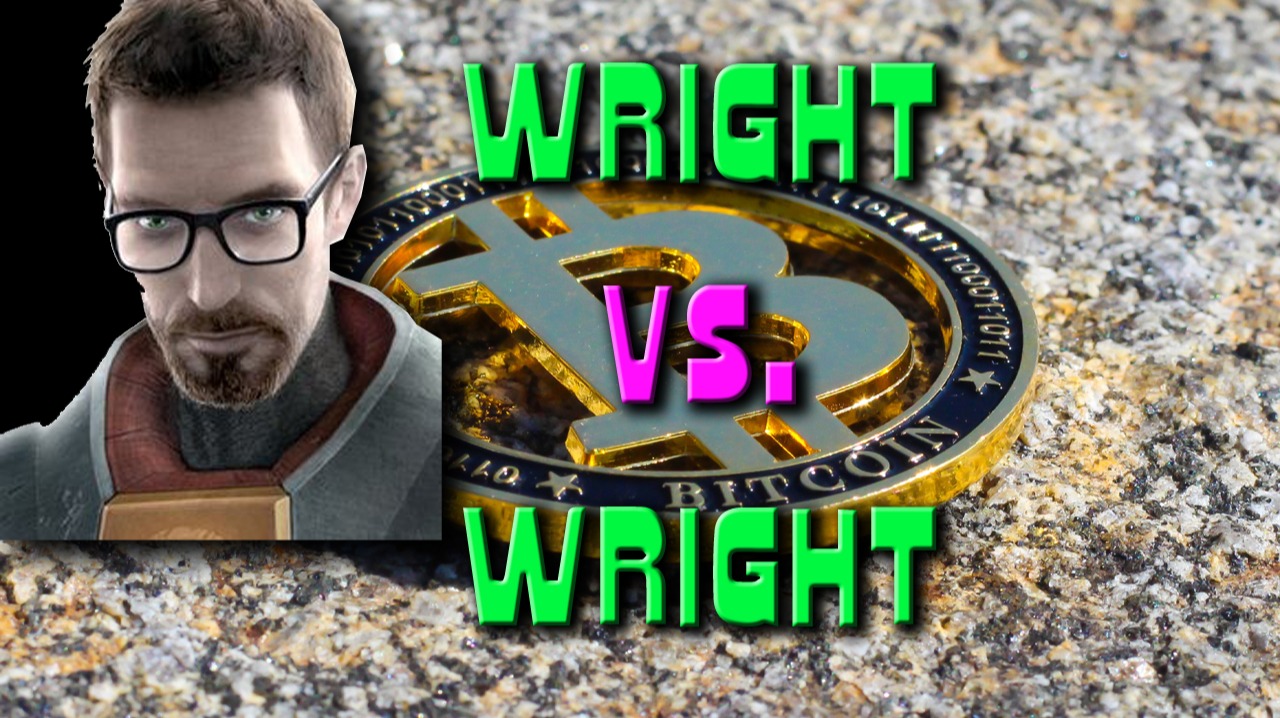 CSW loves to sue almost as much as he enjoys patenting blockchain technology after someone else has invented it.

This week should be no different, as Wright takes... errr... himself, to court over original Satoshi coins that somehow didn't surface until late 2010.

You know every single word of this is true, because how could it not be? It's satire! Therefore, it's not; it's more true than true which means it isn't.

Craig Wright has done a lot for blockchain and Bitcoin. The question, is whether he can take a few moments to love crypto long enough to figure out why he hates it so gosh darned much? I mean, let's look at it from his view. He made Bitcoin. He got help from Kleiman as a partner, which means he must not have been partners with him, because he won that case. Know how you can tell he won that case? Because the court ordered him to pay the equivalent of $100M for violating yet another partnership with Kleiman. Sure, makes sense to me.

Listen, his backers need this to prove he's Satoshi, so let's just stick with the entertainment value. I mean let's face it, the only thing that got a lot of us through 2020 was Tiger King, and that ship has sailed until someone finally catches Carol. Maybe she'll try to take out some of the contestants from Dancing with the Stars and they can re-brand to Dancing Behind Bars!

Back to the point.

Craig, being Satoshi, mines the ever-loving gobstoppers out of Bitcoin nearly a year later than it would seem the origin addresses were piling up the first million coins. He never lets anyone know who he is, because it isn't about that... you know, fame and what not. But then he gets raided for multiple unrelated issues with local and national and international police and other agencies, who also of course know nothing about Bitcoin or Satoshi, and are certainly not there because of that- not going into those details now- bc it's too true for satire.

He left the forum boards because he was unhappy with the dark web and illicit use of his invention. He sets up a trust to place his mined coins and other assets where the government cannot access it.

More than 4 years later, in financial dire straits sans Knopfler, he gets a backer with incredibly shady gambling and lets say "organized" friends who are willing to put millions behind Craig and make his financial woes goes aways (see what I did there? weird yeah). All he has to do is come out as Satoshi, provide reasonable proof to a hand-picked, completely non-technical journalist of good reputation, and they will make billions. But, a year of bumping heads with people who uncover his lack of technical skills, fake 'proofs' and personality destined to simply be incapable of collaborating with anyone, CSW went on a rampage to align forces against Satoshi's Bitcoin, citing the very developer 'he' placed in charge of continued development, joining Roger Ver, the original Bitcoin Jesus (it's less impressive if you just say it like he's Spanish lol... not that a Mexican Sat wouldn't be one of the coolest things since El Sal made a volcano that can mine Bitcoin) to compete against Bitcoin by making a new project with a few other guys they would simply call... Bitcoin.

It is interesting when you hate something so much that you re-brand by using the same logo with a different color background.

What Craig's new buddies didn't count on, and what his backers didn't realize they would be backing, is that he simply cannot agree with anyone else. So, he said go fork yourself, IIIII will go make my vision elsewhere, and I don't need any of you guys.

Ironically, Wright has now amassed his own news websites, falsified dates on Bitcoin related origin websites, and put the mafia in the red for more than $5M. This guys got guts if nothing else!

So, BSV is the 'real' Bitcoin, not Bitcoin or, er, Bitcoin(Cash). Change the Bitcoin logo angle, go for a lighter orange, get rid of the block limit and we're off to the races!

The block wars to fight for the position to become the 'real' Bitcoin became one of the tell-tale signs that Satoshi either suffered a severe personality-altering brain injury, or was simply not the same guy we were witnessing. Wright not only suggested he was okay with, but swore to burn the whole forking thing to the ground to win the hash rate wars. Careful analysis shows that while everyone was calling BCH, or ABC the hash rate winner, BSV was actually winning the data war, but that is an entirely different story.

See, the problem with satire is that there's more truth going on here than anything CSW, his fake news friends and SV believers spin on a daily basis. But, I call mine satire for a reason.

So, people get tired of the rants and raves, but a small cult of believers keep the dream alive for BSV, and people all over Reddit, Twitter and elsewhere simply cannot help but to call Craig out, including actual people who knew the real Satoshi signing origin addresses to let us all know he is a scam. Craig goes Johnny Cash's "Boy Named 'SUE'" and complete anons on Crypto Twitter suddenly can't believe they're getting slapped with a summons for finding it impossible to believe Satoshi is such a jerk. Don't ever say "so sue me" in proximity to maximum Bitcoin toxicity- especially when its over the wrong coin!

Court case comes along and the defendants don't show. I mean, who would? He wins a case on default. They all pretend it means he's Satoshi. He gets ordered to pay $100M in the next case, they call it a win and proof he is not a fraud and is the real Satoshi. I'm pretty sure the judge never heard the name Satoshi Nakamoto through the entire trial, because neither inventing Bitcoin nor covering whether anyone did so under a pseudonym was never a judgment point argued by either side. We live in a time where people quite truly do not have the capability to self-reason.

So, where does a lonely psychotic blockchain develop go when he needs a few billion dollars to cover court costs and the angry road ahead? Well, of course he sues his own developer team, that's where! Yeah, they won't set aside a few billion dollars of hacked BSV coins for him, so he's suing them. But, of course, he forked the fork of the Bitcoin fork purely over ideals, that big blocks are the bee's tiktoks.

While he waits to see what happens next, Wright angered himself. It's true, it really happened... in this story.

He couldn't believe that he was taking down Bitcoin, Bitcoin and Bitcoin, because he is such the beloved creator of the said technology. So he did the unthinkable, and it is quite genius. Wright pulled a 51% attack on... himself!

Now splitting into two alternate personalities, the dominant Wright is set to opening arguments in February '22, where he will attempt to prove that only BSV-loving Craig Wright is the real Satoshi, and shall remain the Craig Wright who secured millions for the mob and friends, claiming his other softer, more scholarly half may have written the white paper, but did not possess the brilliance to go live with blockchain.

Something tells me that either way, no matter what, this is going to be called a win-win for Wright and his BSV faithful. The church of Craig will live to see another day, another victory, and as more and more proof mounts, eventually even he will fork into someone else he despises. All for the sake of the purity of blockchain.

And on that fateful note, Bitcoin Gordon Freeman, the free man, as long as satire is still covered by law, for now... out.