Where are BTC, ETH and XRP Prices Headed This Week? 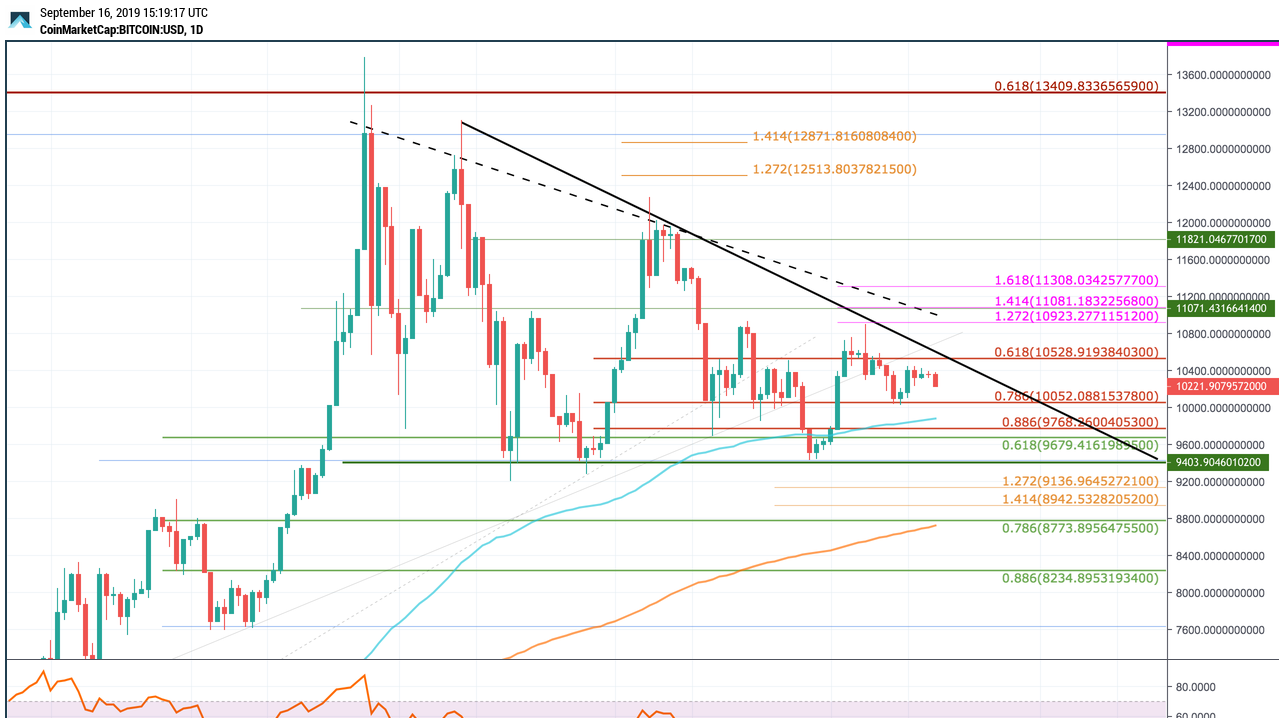 Where are BTC, ETH and XRP Prices Headed This Week?

The cryptocurrency markets have started the week off on the bearish footing as the total market cap of the entire industry drops by a total of $4 billion today, to reach the current level of $263 billion. 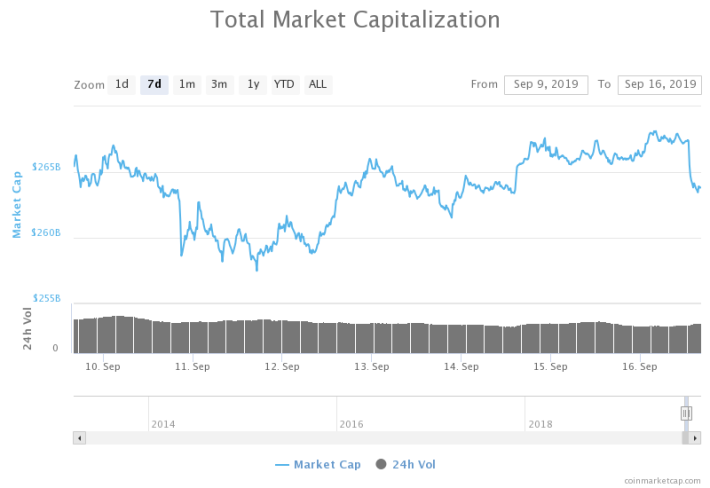 As Bitcoin falls, bringing down the entire market cap for the entire industry, the rest of the cryptocurrency markets have started to show some signs of recovery against BTC which has allowed the price of the coins to remain steady or rise against the USD (even when BTC falls).

Let us take a look at the top 3 projects and see where they might head this week.

Starting things with Bitcoin, the cryptocurrency continues to trade within the descending triangle consolidation pattern that it has been trading within since June 2019. Bitcoin is quickly approaching the apex of the triangle where a breakout is expected in either direction!

The cryptocurrency has remained pretty steady this past week, dropping by a small 1% to reach where it currently trades at $10,221. The cryptocurrency now has a total market cap valuation of $183 billion and is still up by a total of 12% over the past 3 months.

Looking at the metrics created on the Santiment platform, we can see that as Bitcoin continues to consolidate, the volume traded for the coin continues to slowly decrease over time which could suggest a strong breakdown beneath the pattern. Furthermore, we can also see that the total Social Volume for Bitcoin is also falling quite aggressively which shows that fewer people are talking about Bitcoin - could this be a sign that we will be heading lower?

Let us take a look at the charts! 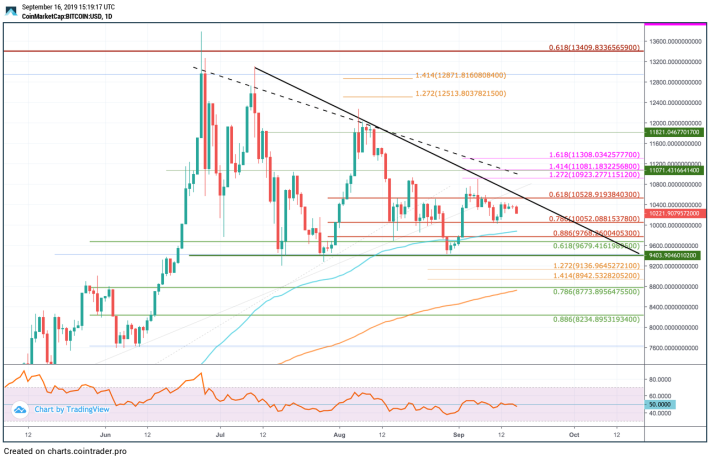 Taking a look at the daily chart above, we can see that Bitcoin has been trading within the consolidation pattern for quite some time now. The cryptocurrency had attempted to break above the upper boundary of the pattern at the start of the month but had failed to do so and remained beneath $10,500. The market has recently turned downward today which could suggest that we may be heading lower toward the base of the triangle.

The RSI is currently trading along with the 50 level which shows major indecision within the market - characterized by the short term consolidation period. For a push higher, we will need to see the RSI rise and break higher away from the 50 level.

Ethereum is in an interesting position as it has started to show some signs of recovery against BTC. We will need to wait for a break above the 0.02 BTC level to confirm that the bulls are in-charge but all the signs are pointing to a bullish push higher for ETHBTC which should help ETHUSD to rise or remain steady.

Ethereum has seen a 5.5% price increase over this past week which makes it the strongest performing cryptocurrency in the top 5 projects. Ethereum is ranked in the second position with a total market cap value of $20.62 billion.

Looking at the Santiment metrics above for Ethereum, we can see that the total Social Volume is starting to slowly increase. This could be a strong tell that things are about to start to heat up for Ethereum. Furthermore, one more interesting statistic to point out is the total Exchange Flow Balance. This measures the total amount of Ethereum leaving or entering exchanges. The statistic is starting to suggest that less ETH is entering exchanges which could be a sign that people are ready to stop selling their ETH which could result in a turnaround in the market. 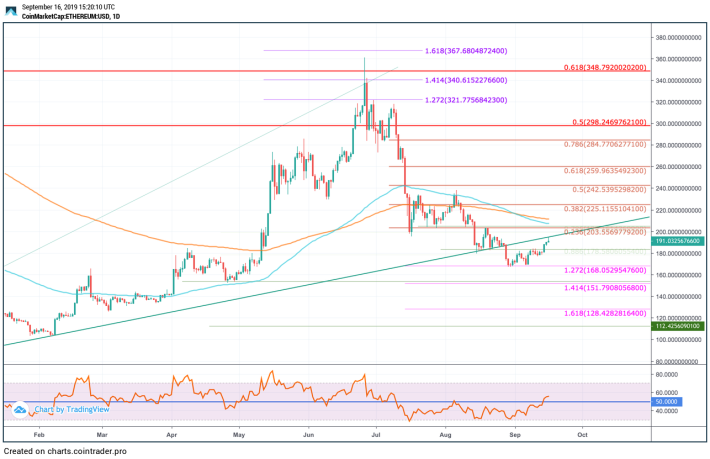 Looking at the daily chart above, we can see that Etherum has bounced positively at the support provided by the downside 1.272 Fibonacci Extension level priced at $168. The 1.4% price hike seen today has now allowed Ethereum to break back above the $190 level and re-test resistance provided by the previous long term support line (now turned resistance).

The recent price surge has also allowed the RSI to rise above the 50 level for the first time since early June, which shows that the bulls are finally back in control over the market momentum.

XRP continues to hold like a rock as it remains steady along with the $0.26 level this week. The market had penetrated beneath the strong $0.30 support during mid-August but has managed to find some further strong support around $0.26. XRP has lost a total of 39% over the mast 3 months, making it the weakest performing crypto out of the top 3 projects!

The Social Volume for XRP also remains pretty low and has still yet to show some signs of increasing. If Ethereum does start to surge, we can expect this to spill-over into XRP and the rest of the altcoin market. 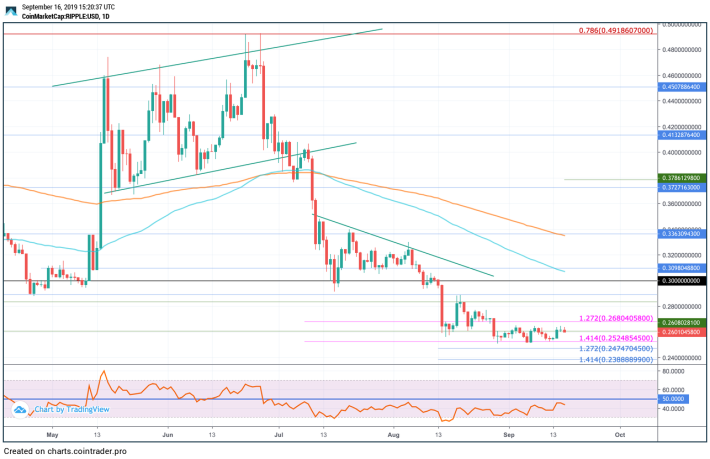 Looking at the daily chart above, we can see that the $0.2524 level (provided by the downside 1.414 Fibonacci Extension level) has continued to hold very strong. XRP has bounced higher from here but is failing to break above the resistance at the $0.26 level. This short period of consolidation has allowed the RSI for XRP to rise slowly, however, it is still in the bearish favor. For a bullish push higher, we will need to see the RSI break above the 50 level.

So there you have it! Trade smart guys!