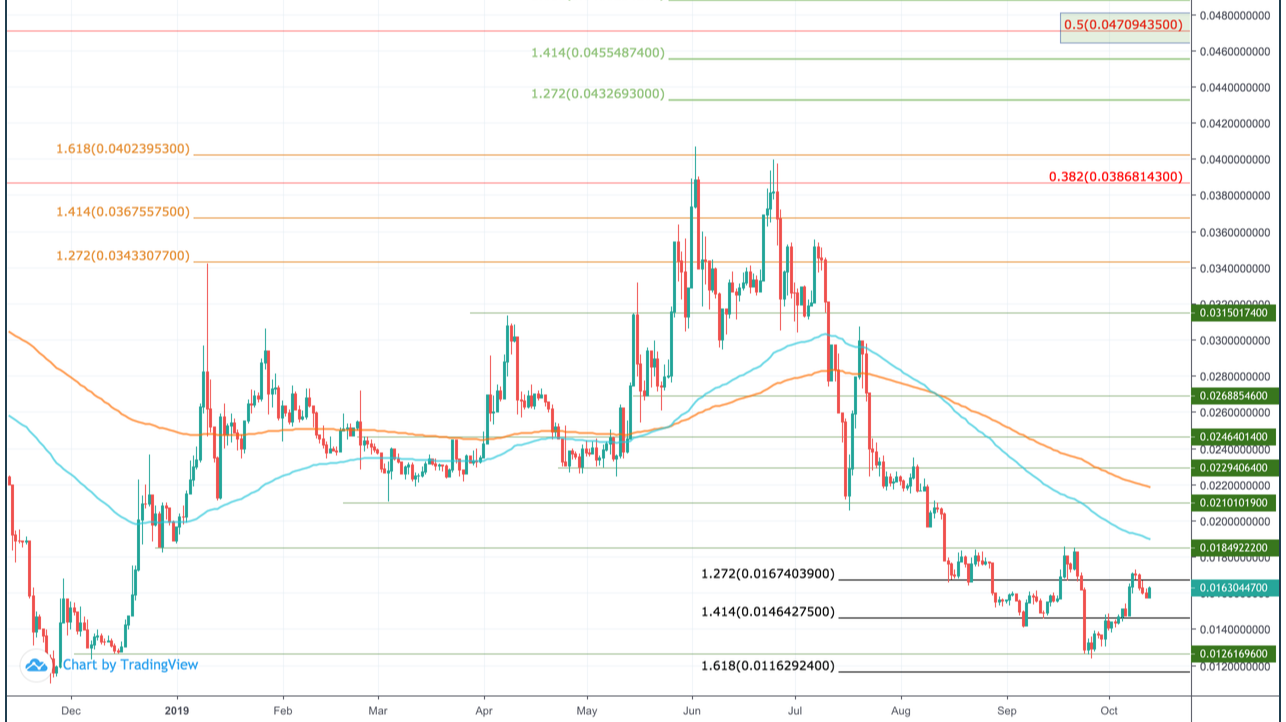 Tron (TRX) has seen an interesting year thus far, as of October 13th, 2019, as it has surged higher only to reverse and fall beneath the 2019 opening price. At the start of the year, Tron had opened trading at a price of around $0.02 and began to surge higher by a total of 194% to reach the price of $0.039 by June. However, this is when Tron ran into very strong resistance which caused the market bull run to reverse, leading to Tron to drop around 60% to reach the current price of around $0.016.

Despite this severe price drop, I believe that Tron has a very strong potential to start climbing as 2020 begins to trade, leading to a price increase of around 195% (from the current price) to reach my target of $0.047. I believe that the growth of Tron will largely be attributed to the growth of the dApp ecosystem that the Tron project has steered itself into. Originally, Tron was meant to be only a decentralized content sharing platform but over time it has evolved into a decentralized application platform that has the strong potential to rival other decentralized operating systems such as EOS and ETH.

In this article, I’ll firstly cover a range of topics that I believe will influence TRX in reaching my $0.047 target during 2020 and then analyze TRX on the long term daily charts to highlight some areas of resistance on the way toward the target.

Whilst many holders are complaining about the PR disasters that Tron has seen this year - think back to the Tesla giveaway debacle and the failed Warren Buffet lunch - Justin Sun has been vocal in being very optimistic for Tron during the second half of 2019;

Tron Expands Use Case And Becomes A Strong dApp Ecosystem 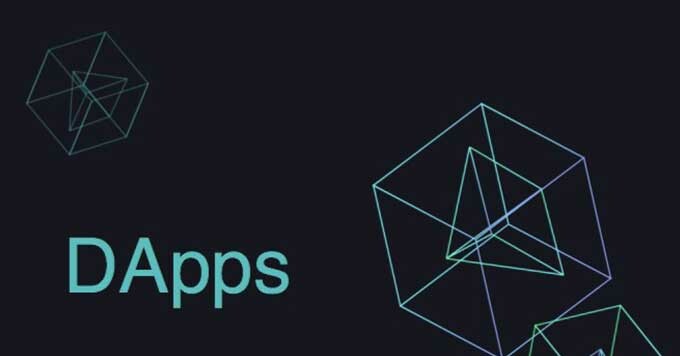 Tron launched with the aim to change the way that content is published on the internet. In today’s method of sharing content, the middlemen that publish the content (such as YouTube and Facebook) earn an unfair amount of the revenues that each piece of content brings. For example, YouTube will take up to 45% of any revenues generated from adverts - a pretty hefty sum - and Facebook actually gives nothing!

The idea of Tron was to create a platform in which content can be shared which is fully owned and controlled by the content producer - leaving the middlemen out of the equation. The Tron platform will allow users to share content and earn money from the support received by the community that enjoys that content. The content can be anything from a blog post, video post, application or even just an image post. Whatever the content, the content producer will fully own their own content and will be able to be compensated fairly for it. For an overview of what Tron is trying to achieve, take a look at this great article.

However, over time, Tron has expanded its horizon and is now well on the way to become a decentralized operating system, much like EOS and Ethereum. The team has moved into the decentralized application (dApp) industry and is a very strong candidate for becoming one of the best options for developers to come and create dApps on the Tron blockchain.

Firstly, Tron uses a Delegated-Proof-Of-Stake (dPoS) consensus mechanism which is much more efficient and secure than the traditional PoW/PoS mechanism. Much like EOS, Tron has decided to go the route of electing Super Representatives that will help to secure the Tron blockchain and verify transactions. This is beneficial as all transactions will only have to go through 27 elected super representatives rather than going through thousands of nodes - thus increasing the efficiency.

Furthermore, Tron has a much higher throughput rate than its competition. Tron has been able to achieve a Transaction Per Second (TPS) rate of 2000 TPS, which is significantly higher than the 20 TPS available to Ethereum. This is important for developers as they will know that if they join the Tron blockchain, there will be enough throughput for their dApp to function and grow.

Tron is already doing very well in the dApp ecosystem race which is evidenced by the fact that Tron dApps make up for half of the top 10 dApps used amongst any blockchain; 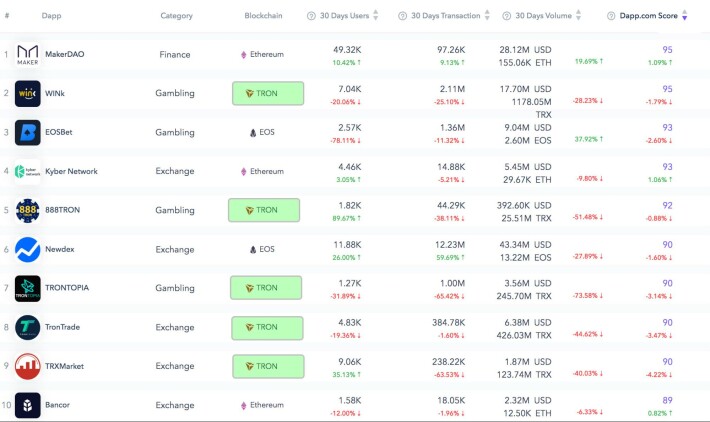 Although the Tron project has been accused of plagiarizing its Whitepaper, the development roadmap still extends over 8 years into the future which is broken into six stages and is planned until 2027. Stage 1 and 2, Exodus and Odyssey, have already come to pass. Odyssey version 3.6 has recently been added to the TestNet which will include Voting for super representatives with the TVM also supporting multiple signatures and parallel verification. The multiple signatures for the TVM are very important for Tron to be able to move onto the next stage of development, Great Voyage.

Great Voyage is expected to commence at some point during June 2020 and will allow the Tron blockchain to be able to launch its own ICOs. After the Great Voyage stage comes the Apollo stage which will allow Tron to launch its own tokens. This stage will bring a developed protocol to cover all SHTF scenarios and prevent attacks on the network. The final two stages are Star Trek and Eternity. Star Trek is expected to introduce a gaming platform to Tron in which a decentralized ecosystem will be created for playing games and gaining rewards. Eternity is expected to be the final stage for Tron development and is expected to commence around 2027 (rough estimate I assume!).

Although projects rarely follow their roadmap, it is encouraging to know that Tron has some form of rough outline on where they plan to take the project over the coming decade.

Taking this further, if we take a look at the “Development Activity” statistic provided by Santiment, we can see that the Tron developers are actively working.

Tron Announces $100 Million Fund For Devs To Build On Tron! 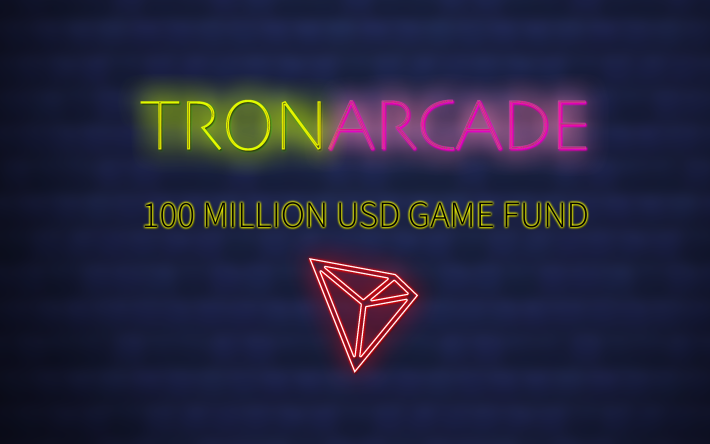 Although this was announced during November 2018, it is important to remember that the $100 million fund for developers will continue to run for 3 years. The team over at Tron had announced that they have set aside $100 million of funding for developers who would like to come and build decentralized apps and games on top of the Tron blockchain. This whole project is known as Tron Arcade.

Tron Arcade is designed to give developers the platform and the money (along with some support) that they require to come and build on top of Tron. The fact that this is such a large investment shows that Tron is prepared to take major steps to build a foundation for a robust blockchain gaming ecosystem. Justin Sun had the following to say about Tron Arcade;

“TRON Arcade will play a crucial role in encouraging developers to join in our mission and provide the best blockchain gaming experience to users around the world.”

The SUN Network, An Introduction To dAppChains 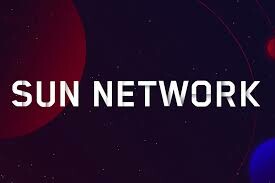 The Sun Network is a scaling solution for Tron that is built to expand the capacity of the Tron mainnet. The solution went live in September and is officially on the mainnet. The Sun network is intended to bring scaling projects such as smart contract dAppchain and cross-chain communication.

The dAppchains will allow decentralized applications to run on Tron with lower energy consumption, higher efficiency, and higher security. Tron has decided to introduce dAppchain in the hope to accelerate the development of a dApp ecosystem. 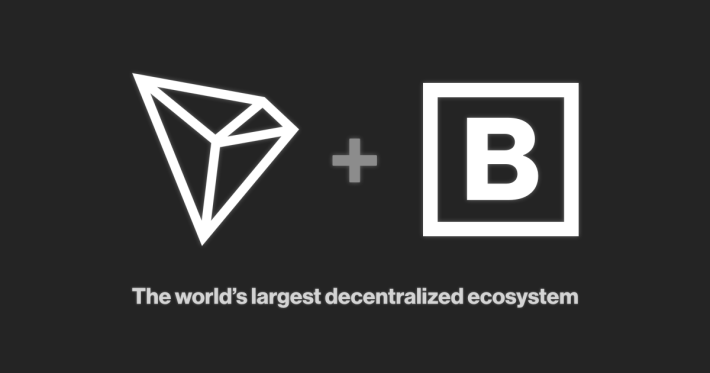 Although oBike, a bicycle startup based in Singapore, was a fantastic partnership for Tron, we must not forget how the acquisition of BitTorrent will continue to help the Tron ecosystem moving forward into 2020.

BitTorrent was acquired by Justin Sun for a price tag of $140 million during July of 2018. Since acquiring BitTorrent, Tron has successfully released the BitTorrent Token (BTT) as a TRC10 Token launched on the Tron blockchain

BFTS - Bringing FileSharing To The Blockchain Via BTT 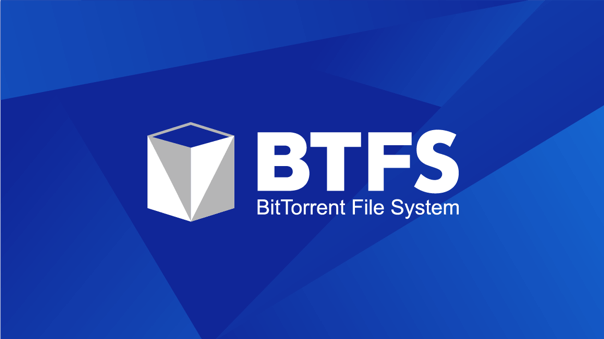 The BitTorrent File Sharing (BTFS) protocol is a next-generation file sharing protocol that utilizes the Tron network through the BitTorrent ecosystem. Current blockchains focus on computational tasks but do not offer a cost-effective and scalable solution for file storage and sharing. Furthermore, with traditional file storing solutions there are often problems with centralization.

After being officially launched to the mainnet during October 2019, the BTFS protocol is intended to address the previously mentioned problems. Although in its current form, many of the functions are still only able to be executed on the command-line, development is making steady progress. Users are now able to delete, upload, transfer and download files using the BTFS. Encryption and decryption of stored files are said to be on the way.

Furthermore, looking ahead to 2020, the BTFS is expected to be integrated into the BitTorrent client in Q1 2020 - a process which will greatly increase the reach of the BTFS.

BT Speed - The First Real Use Case For Blockchain?

BT Speed has been dubbed as the first real case for blockchain mass adoption as it powers traditional content sharing with the BTT cryptocurrency. Users of uTorrent can enjoy faster download speeds whilst using BTT and are also able to be the first to download rare content.

Users can also earn BTT by simply sharing files over the internet. The exchange mechanism is designed on an auction model where users bid to claim for higher bandwidth to increase their download speeds.

BT Speed is well underway and has already been used by 20,000 people - 7,000 of which interact with the application on a daily basis.

The last bullish catalyst that will help Tron rise in 2020 is the introduction of its latest buyback plan. Tron had announced the $20 million buy-back plan during July 2019 in the hopes to bolster community activity and market stability. The buy-back plan is expected to run for 1 year as it runs through 2020.

The team has already completed the first phase of their buy-back plan which you can see here. 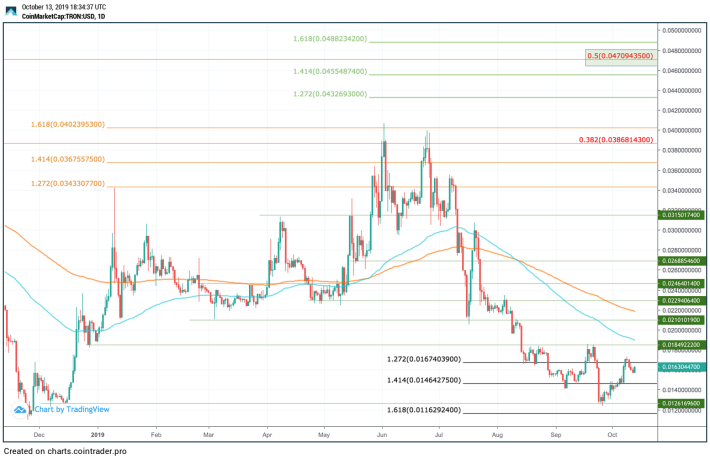 Taking a look at the long term daily chart above, we can see that Tron had started the year off on a bullish run after the cryptocurrency managed to surge toward the $0.0386 level. Tron had met resistance here with resistance provided by the long term bearish .382 Fibonacci Retracement level priced at $0.03868. This bearish Fibonacci Retracement is measured from the high of $0.084 placed on May 21st, 2018 to the low of $0.010, seen during November 2018.

Since reaching the aforementioned resistance, TRX has rolled over and plummetted significantly. Tron went on to drop beneath the 2019 opening price until support was found at the December 2018 low at around $0.0126. After reaching this support, we can see that Tron has rebounded and has started to climb higher.

If TRX was to fall beneath the support at $0.0126, we would consider the bearish market to continue further lower (and probably not hit my 2020 target :[ ),

I believe that Tron certainly does have the potential to rise by 194% to reach my target of $0.047 by 2020. This is providing that Tron does not make a fresh lower low in the meantime. There are many factors that will drive Tron toward the target but one of the main driving forces will be the continued expansion of their dApp ecosystem. As more developers start to launch their projects on the Tron blockchain, this will help the entire Tron ecosystem including TRX. Furthermore, as BTT continues to develop and grow - this will also help to boost the Tron ecosystem itself.