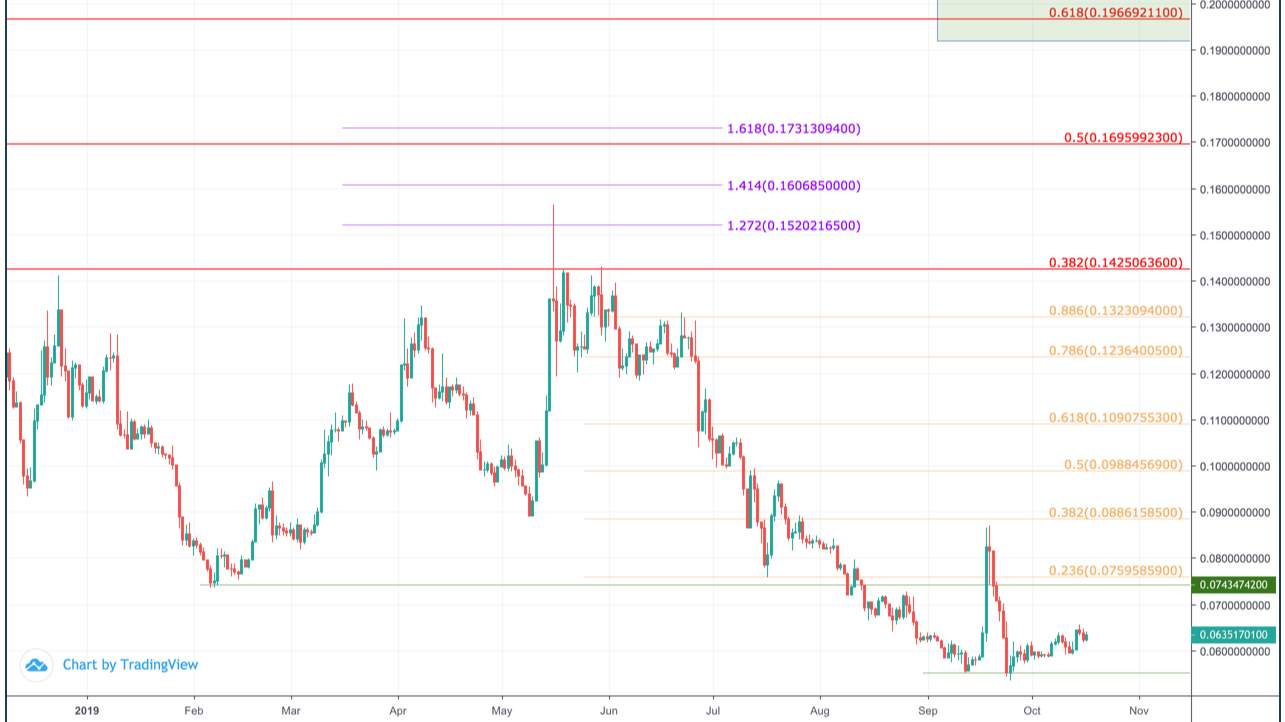 If somebody was to tell you XLM has witnessed a fantastic year of trading during 2019, they would be flat out lying to you! Stellar has dropped a total of 14% from the yearly opening price as it currently trades at $0.0635 (as of October 19th, 2019). Of course, Stellar did surge by a total of 95% from the February 2019 low to the June 2019 high of $0.14, however, after rolling over at this level of resistance, Stellar plummeted by a total of 55% to the current trading price.

But please do not take this as any reflection on the progress that Stellar has made thus far. The team is actively working very hard behind the scenes to increase the reach of their revolutionary financial platform. Stellar has actively been developing new technologies to integrate into its network and has had managed to “pull-in” some great talent to become part of their evergrowing team. Furthermore, the partnerships that Stellar is currently working on will certainly help the price for the cryptocurrency surge over the coming years, 2020 included. For this combination of reasons (and more which is discussed below), I believe that XLM still has a very STRONG potential to surge by 210% from the current price to reach my 2020 target of $0.20 at some point during 2020.

In this article, I’ll firstly cover a range of topics that I believe will influence XLM in reaching my $0.2 target during 2020, and then analyze XLM on the long term daily charts to highlight some areas of resistance on the way toward the target.

The Stellar Platform is a blockchain-based platform that is a provider of real-time foreign exchange transactions through XLM. It was founded by Jed McCaleb in 2014 when he was still working at Ripple. The cryptocurrency was originally forked from XRP but has seen many technological changes and now the two blockchains are pretty much completely different.

The development of Stellar is actively managed by the Stellar Development Foundation, a non-profit entity. It has a number of different services on top of the platform that includes a token issuance service, a decentralized exchange (DEX) and a desktop client. The DEX, known as StellarX, is actually the world’s first feeless decentralized marketplace and even features a fiat gateway!

Rather than replacing the current system that we have, the team at Stellar are primarily focused on integrating blockchain-based distributed ledger technology into the existing financial infrastructure. Their system allows for the connection of banks, payments systems, and people, to allow them to facilitate fast, cross border transactions between any pairs of currencies - not just XLM. This means that Bob in the United States can send US Dollars to Chris in the UK, but Chris will receive his own countries currency which is the British Pound. Just looking at this alone, you can see how Stellar is trying to create a new decentralized financial global ecosystem that is already integrated with the current financial system that we have. 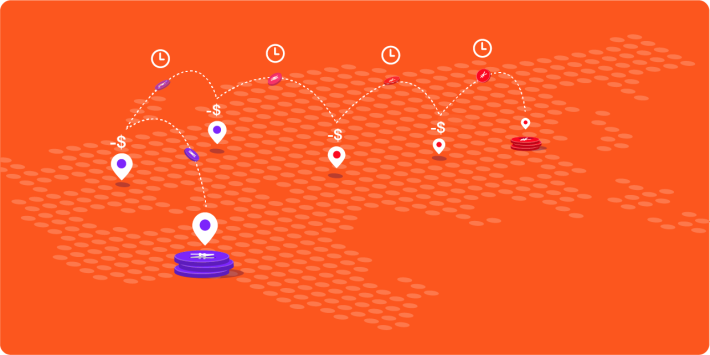 So, How Does This Even Work?

The entire system works by tracking ownership on the blockchain. The blockchain-based accounting system stores 2 important things for every account; the balance and operations on those balances.

Stellar Lumens (XLM) is the cryptocurrency that powers the entire Stellar platform. To even have access to the Stellar network, the user must have at least 20 XLM in their account. Every account on the platform must also set aside a small number of Stellar Lumens for each type of asset that the account holds. Furthermore, all the transaction fees (which are very minute) must be paid in XLM.

Stellar is the network and the platform which makes all peer-to-peer transactions possible. The platform allows nearly any currency (we are talking FIAT here - but crypto can be used too!) to be transferred from one person to another - regardless of which country each user is located within. The platform has a built-in conversion system that allows users to send one currency which will then be converted into a different currency according to the specifications of the receiver.

XLM acts as a bridge asset within the cross-currency payments. The use of XLM allows users to get the best price and also facilitates transactions to be settled in seconds. You could even suggest that XLM actually acts as a bridge between the decentralized cryptocurrency world and the centralized financial system that we live in today.

To understand Stellar in more detail, I recommend looking at this in-depth guide to Stellar.

The team over at Stellar continues to expand, and they are not just hiring anybody!

Interstellar had recently hired Mike Kennedy as their new CEO. Kennedy is the founder of Zelle, a payment system that is used by Chase, Citi, and BoA. He has a strong track record and is a perfect fit for the project. Kennedy had stated;

“With Interstellar I see another opportunity to solve a real-world problem. Today, international payments are inefficient, expensive, and slow. Millions of individuals and businesses would benefit from solving these problems. The Stellar Development Foundation (SDF) has developed what I believe is the best blockchain-based payments network, enabling fast and inexpensive international payments.” 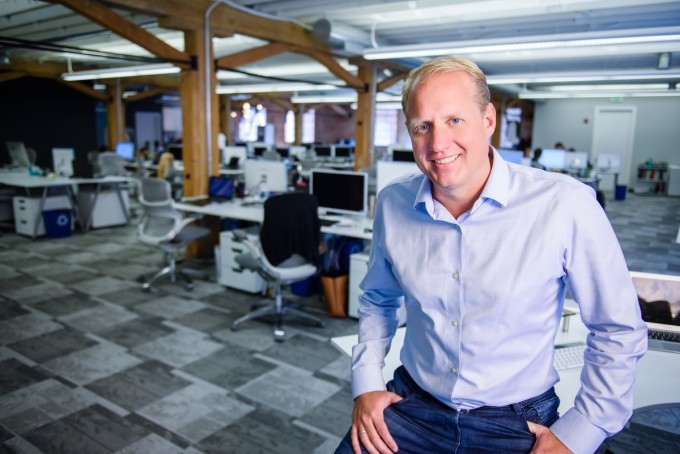 Stellar has also recently hired the former COO of Mozilla (yes, the browser), Denelle Dixon. Dixon has now joined the Stellar Development Foundation as the new operating CEO. This is a COO who has led the fight for net neutrality as well as driving the global effort to ensure that people can control their personal data. She had urged Mozilla to launch the data protecting browser extension called Facebook Container only hours after the Cambridge Analytica scandal hit the press. Dixon will certainly be a great asset to Stellar moving forward! 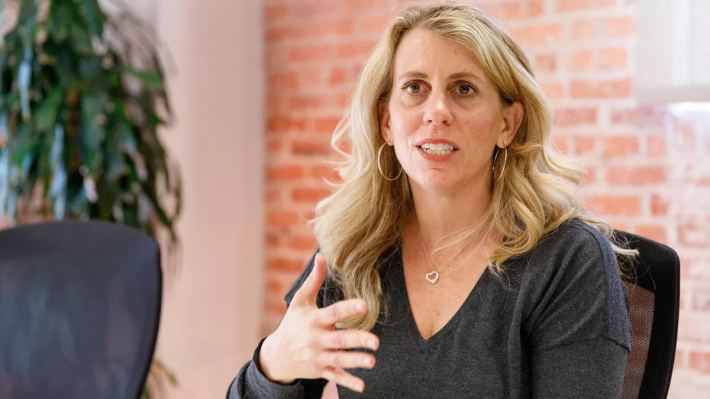 Stellar Understand That Education Is an Important Factor

The Stellar Foundation recently announced a collaboration with Blockchain Academy Mexico. This partnership is to offer new educational opportunities around building on Stellar. This will be the first institution in Mexico focused on developing and building an entrepreneurial ecosystem using blockchain infrastructure

Stellar Excels in the Partnership Division

Perhaps the most promising thing that Stellar has achieved is its long list of high-profile partnerships. As Stellar is enterprise-friendly, it has already been implemented into the business procedures of the accountancy giant, Deloitte. The two had joined forces to create a cross-border payment application to be used by the firm. Deloitte has stated that their solution has reduced transaction fees by upward of 40%. Furthermore, transaction times have reduced to only 5 seconds! 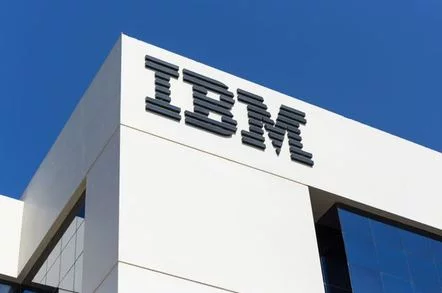 The most widely known partnership for Stellar is its affiliation with IBM. IBM’s blockchain division has settled on using XLM as their cryptocurrency of choice for their payments infrastructure. This partnership with IBM is now competing with Ripple in the hopes to replace SWIFT at some point in the future.

IBM had announced that it has developed a blockchain platform for banks which will allow for global payment transactions with rapid clearing and settling. IBM is already offering services to National Australia Bank, The Spanish BBVA and Indonesia’s Bank Danamon. This type of alliance most certainly improves the credibility of Stellar.

Their solution is mainly focused on transforming cross-border payments. Currently, banks have to maintain foreign accounts to facilitate cross border payments. Furthermore, making international payments can be costly, laborious and error-prone. The fact that an international payment may have to go through many intermediaries means that the settlement can often take days, and sometimes weeks.

The combination of having everything from clearing, transactions and having assets on the network makes it super easy for banks to deal with, providing an attractive option for them to upgrade their services.

IBM uses Hyperledger fabric. This is an open-source network that contains a platform for building smart contracts. By implementing both Stellar Network and digital assets on Hyperledger, the IMB blockchain can conduct cross-border transactions in a cheaper, quicker, and more transparent way.

KickEx has stated that the network has begun processing live transactions across 12 currency corridors which include the UK and Australia.

Stellar has recently released the v0.22.1 upgrade to its Horizon API. The Horizon API is a client-facing API server for the Stellar ecosystem to offer the usage of Stellar technology to build new applications. The API acts as an interface between Stellar Core and the applications that want access to the Stellar network. The latest V0.22.1 upgrade includes support for Stellar-core v12.0.0

Stellar Core V12 will include 3 Core Advancement Proposals. These include upgrades to make things easier for node admins and disables the current inflation mechanism.

Although Stellar has been releasing updates in 2019, data from Santiment suggests that the development activity is starting to tumble;

This is pretty worrisome, however, we must remember that everybody deserves a break around new years time and we can expect this to start picking up as we head further into January! 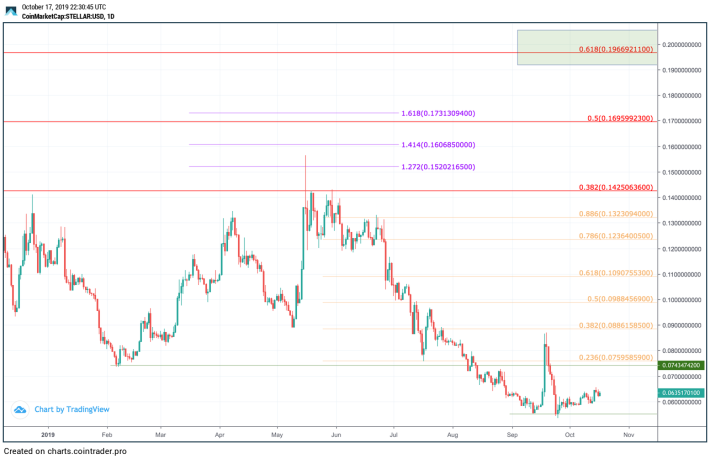 Taking a look at the daily chart above, we can see the 95% price increase witnessed from February through June. XLM had met resistance at the long term .382 Fibonacci Retracement level (drawn in red) priced at $0.1425 during June which had caused the market to roll-over and fall. This long term Fibonacci Retracement level is measured from November 2018 high to the February 2019 low.

After meeting this resistance, Stellar reversed and started to plummet heavily. The cryptocurrency went on to break beneath the February 2019 low and continued to fall further lower until finding support at the $0.055 level - creating a fresh low that had not been seen since November 2017 (yikes!).

As of October 2019, we are most certainly bearish - although the market is starting to turn neutral as it has stopped making lower lows. For this bearish trend to continue, we would need to see Stellar drop and fall beneath the support at $0.055 - which looks unlikely at this moment in time. For this market to be considered as bullish, Stellar would need to rise and create a fresh high above the $0.09 level.

On the way up toward the $0.2 target, XLM will first meet resistance at the $0.0759 level. This is resistance provided by the short term .236 Fibonacci Retracement combined with the 100-days EMA. The next level of strong resistance above this is located at $0.090 which contains the bearish .382 Fib Retracement as well as the 200-days EMA.

If the bullish pressure continues to drive XLM above $0.14, they will meet some significant resistance at the 2019 high around $0.1425. This is resistance provided by the long term bearish .382 Fibonacci Retracement level (drawn in red). Resistance following this is located at $0.1520 and $0.1606 which are the 1.272 and 1.414 Fibonacci Extension levels, respectively.

Higher resistance is then to be expected at $0.1695 which is provided by the long term bearish .5 Fibonacci Retracement level. If the bulls can then continue to rise above $0.1731 (1.618 Fib Extension) and $0.18, they will be free to make an attempt at my 2020 target of around $0.20. The resistance at this level is deemed to be significantly strong due to the fact that the long term bearish .618 Fibonacci Retracement level is located here.

I strongly believe that XLM will most certainly be able to rise by over 200% in 2020 to reach my target of $0.20. The Stellar project has too much momentum behind itself to slow down and I believe that as their partnerships with IBM (and other companies such as Deloitte) flourish, this will bring some well-received attention to the Stellar project. Furthermore, the team is filled with very well experienced individuals that have the experience necessary to take the entire Stellar project to the next level.