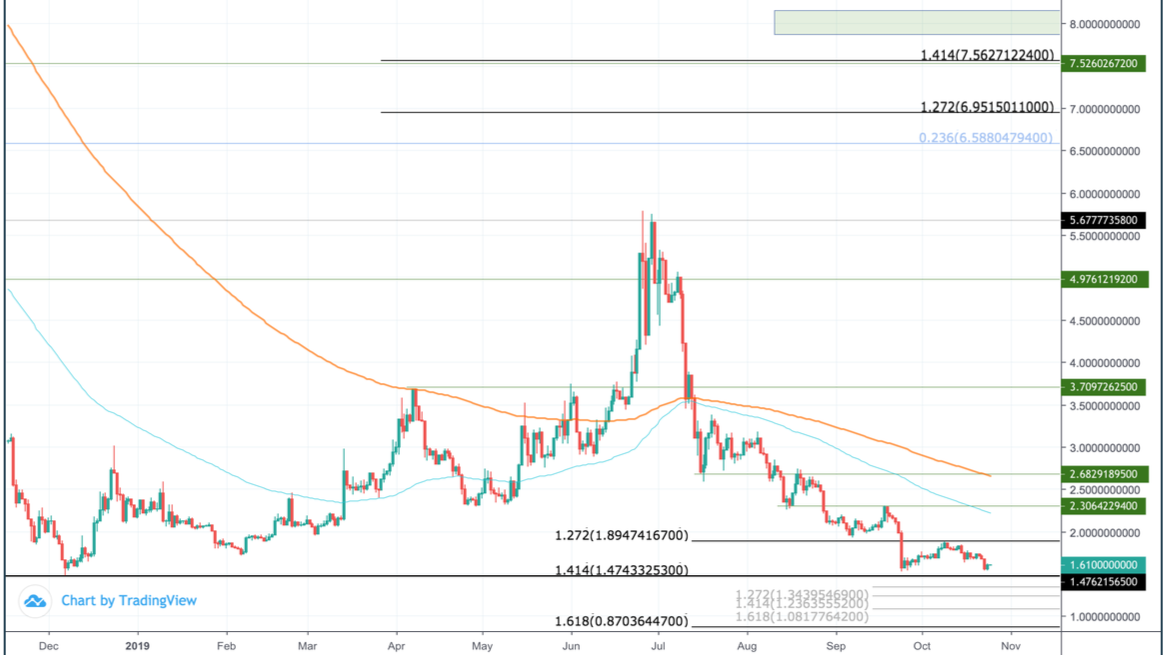 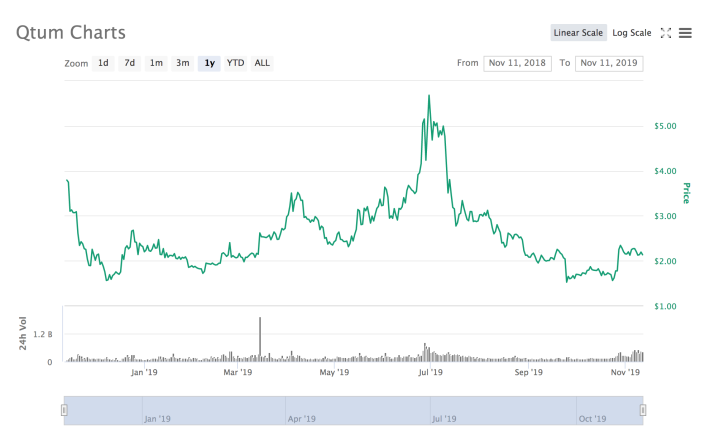 However, after reaching the 2019 high, Qtum rolled over and started to plummet precipitously. The cryptocurrency went on to fall by a total of 72% to the current trading price and had even created a fresh 2019 low at the $1.52 level during September 2019.

Nevertheless, despite this drastic market condition I still believe that Qtum can turn things around in 2020 and increase by a total of 400% to reach my target of $8.00 at some point during 2020. Qtum has recently undergone a hard fork that has introduced a host of new features that will help the platform to expand in 2020. Furthermore, Qtum has started to develop some very promising partnerships which should help the entire ecosystem to thrive during 2020.

In this article, I’ll firstly cover a range of topics that I believe will influence QTUM in reaching my $8.00 target during 2020 and then analyze QTUM on the long term daily charts to highlight some areas of resistance on the way toward the target.

Qtum is largely considered an enterprise-focused smart contract platform. The Signore based project was founded by Patrick Dai, Jordan Earls and Niel Mahi in 2016 and was designed to enable businesses to develop smart contracts and decentralized applications - giving it the label of a “business-facing” platform.

Qtum was originally designed to be the bridge between the Bitcoin and Ethereum communities and the codebase takes features from each of these cryptocurrencies to create a powerful platform.

Their goals are all enterprise-focused and their technical framework shows this as the code makes use of a Decentralized Governance Protocol (DGP) and an Abstract Account Layer (AAL) for some serious security and performance benefits.

These are two very important features that make Qtum an attractive option for enterprise businesses as they need not worry that their application will slow down the network and will remain confident that the network can easily upgrade without disrupting operations.

For an in-depth overview of the Qtum framework, take a look at this great write up!

Looking at the development activity provided by Santiment, we can see that the Qtum team have been fairly active during 2019 after experiencing a surge of development throughout the middle of the year;

If you were to only glance at the chart above it might seem that the development team worked a lot during May/early-June and not too much during the rest of the year. However, if you look closely at the Y-axis you will notice that it clearly shows that development activity is still decent in other months also!

On October 17, 2019, at block number 466,660, Qtum had completed its first-ever hard fork which saw the launch of Qtum 2.0. The hard fork occurred smoothly, as expected, showing the competency of the development team.

The update introduced a range of Qtum Improvement Protocols (QIPs) that helped to improve the protocol. QIP-9 reduced blocks with long spaces which used to cause some problems for the mining difficulty. The introduction of QIP-9 has already shown some promise in reducing the large swings that were previously seen in the mining difficulty as shown in the graph below;

Another upgrade included QIP-7 which integrates the latest features from the Ethereum Virtual Machine and adds 11 new opcodes for smart contract compatibility with Ethereum Constantinople. This latest update is expected to allow developers to create new types of applications on Qtum that will have better privacy, security, and usability. Currently, developers can code dApps on the Qtum x86 Virtual Machine in the C coding language but we can expect further languages to be added as time progress deeper into 2020. 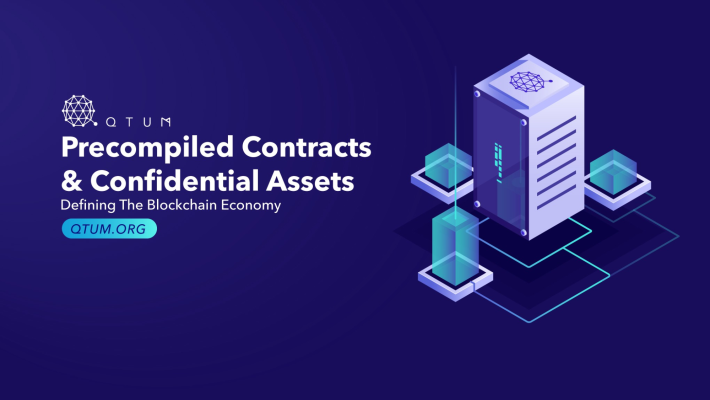 The hard fork had also introduced several precompiled contracts to Qtums Virtual Machine which will allow for more efficient smart contracts that can offer the creation and transfer of confidential assets.

Other features for the QTUM 2.0 hard fork included QIP-5, a smart contract feature to make dApps more user-friendly, and QIP-6, a precompiled contract and a library for smart contract verification.

Partnerships Designed To Expand The Ecosystem

When it comes to partnerships, Qtum has some heavyweight companions that allow them to hang with the giants! As these partnerships mature, they will continue to aid a growing ecosystem during 2020. 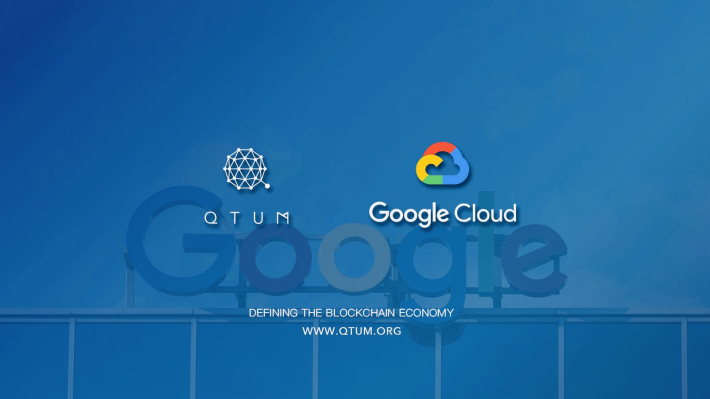 In May 2019, Qtum announced its partnership with Google Cloud to launch a suite of developer tools. These tools are designed to give developers a simple and cost-effective way to launch nodes on the Qtum blockchain. The free-to-use set of tools is available through the Qtum Compute engine which lets any to launch a full development environment on Qtu - regardless of development experience. As this engine is hosted on Google Cloud, when the Qtum source code is upgraded, Google Cloud will automatically update the code to save developers the hassle of updating manually. 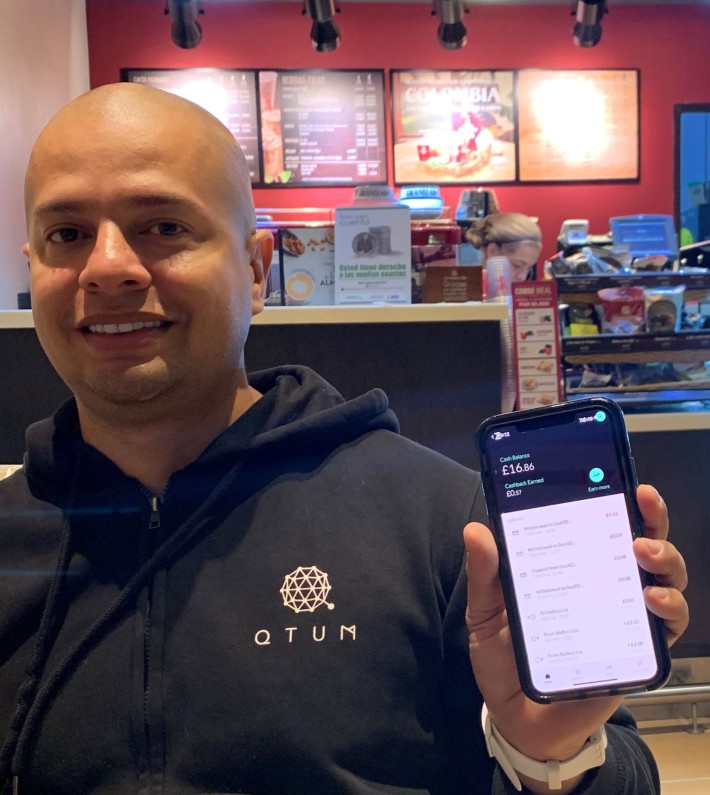 Another notable partnership is the addition of Qtum to the Zeux application as they launch in the UK. Zeux will now reduce the friction of using QTUM in the real world - allowing users to pay for products at any merchant that accepts Apple Pay or Samsung Pay. Most importantly, Zeux charge zero-fees on foreign transactions! 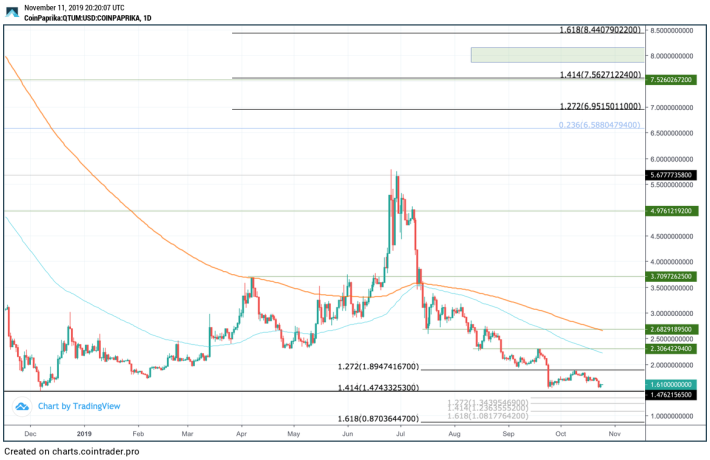 Taking a look at the long term daily chart above we can easily see QTUM rising throughout the first half of the year after bouncing from the February low at $1.70. QTUM went on to rampage above the 100-day EMA during March and continued to climb higher until reaching the resistance at the 200-day EMA at around $3.70 in April 2019.

It was not until June when QTUM was able to break above the 200-days EMA. During June, QTUM surged past the 200-days EMA, rose above the resistance at $3.70, and continued much higher to reach the 2019 high around $5.70.

After reaching the 2019 high, QTUM rolled over and began to drop at a rapid rate. The cryptocurrency broke beneath the 100-day and 200-day EMAs during July and continued to fall much further lower as the months progressed.

During September 2019, QTUM collapsed beneath support at $1.90 and created a fresh 2019 low at $1.52. Luckily, there is still some support toward the downside which can be found at the 2018 low at $1.47. I do not expect QTUM to break beneath this support but if it does, it would greatly affect my 2020 price prediction.

As of November 2019, I would be lying if I would not say we are in a bearish trading condition. Technically, we are presently neutral as we would need price action to drop further beneath the $1.52 level for the bearish trend to continue further.

QTUM has seen a very poor performance during 2019 considering the fact that we are trading around 30% from the 2019 opening price. Nevertheless, Qtum still has a strong infrastructure and team behind the project that allows enterprises to easily enter into the blockchain industry. The project has just hard forked and upgraded its technology to increase the efficiency and security for the Qtum network. The benefits of this upgrade should be seen as 2020 unfolds and Qtum develop deeper partnerships with more enterprise companies.