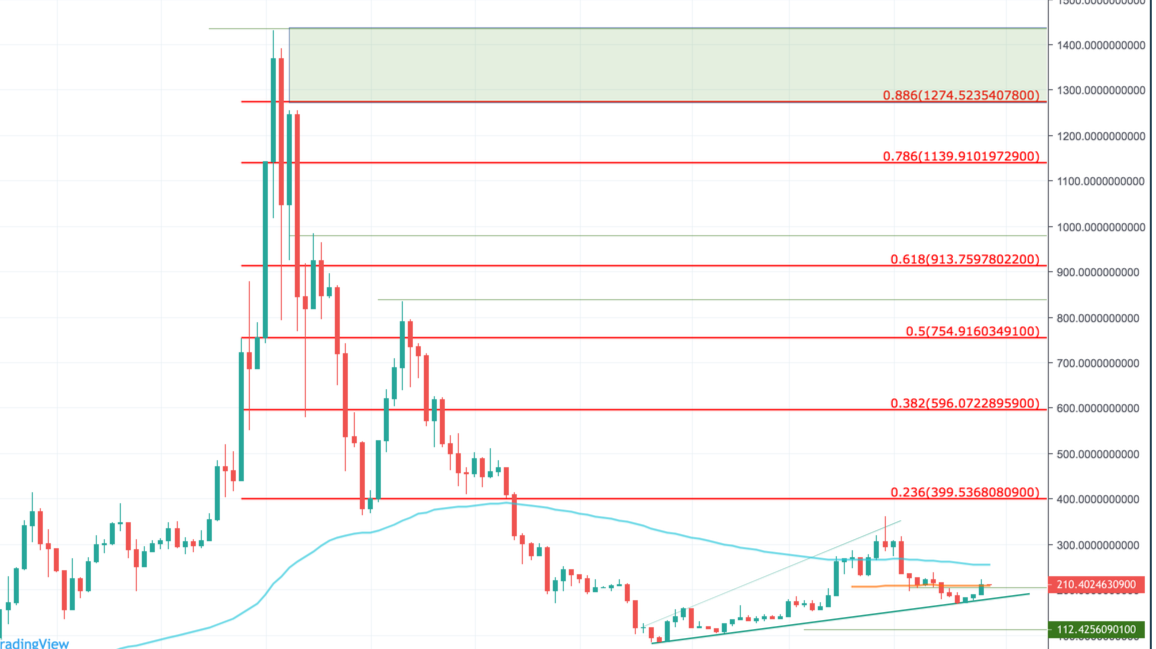 Ethereum is an EXCITING position on the day of writing (23/09/19) as it manages to remain above the $200 level. Ethereum had been suffering heavily against Bitcoin during 2019 after the cryptocurrency dropped by a total of 60% from 2019’s high to the 2019 low. However, as Bitcoin started to consolidate from June 2019 onward, Ethereum has started to show some promise against BTC as it began its rebound higher. This rebound will be one of the main drivers that could allow Ethereum to continue higher toward my $1,400 target by the end of 2020.

In this article, I’ll firstly cover a range of topics that I believe will influence Ethereum in reaching my target in 2020 and then analyze Ethereum on the weekly and daily charts.

The main problem that is holding Ethereim back is scalability. This has been an extremely apparent problem ever since CryptoKitties became overwhelmingly popular, causing the Ethereum blockchain to clog up during 2018 and also causing the fee per transaction to soar to over $20.

You see, Ethereum was built with the idea of being the worlds’ decentralized operating system where developers could host their decentralized applications to the entire world (note: For a really good intro into Ethereum, take a look at this GREAT in-depth article). However, as the dApp store started to grow, it became apparent that the current 20-25 Transactions Per Second that Ethereum can handle is not nearly close enough to the required throughput required to host the worlds’ dApps on a large scale.

NEVERTHELESS, a little thing called Serenity will turn this all around! For those that do not know, Serenity is the much anticipated scaling upgrade that Ethereum has in the works which will allow the Ethereum blockchain to scale to tens of thousands of transactions per second.

Let me begin to highlight some stats that indicate that Ethereum is starting to gain traction before discussing the main catalyst (Ethereum 2.0) that will drive Ethereum toward $1,400 during 2020.

Data from Satiment shows that people are starting to move their ETH AWAY from exchanges and back into personal wallets;

The data shows that over the past few weeks, there has been a negative exchange flow which indicates that ETH is flowing away from exchanges. This is an indication that investors in ETH are perhaps already done selling and are ready to HODL for an anticipated rally. If ETH investors were unconfident about the future, more ETH would be flowing into exchanges to be sold.

Another interesting statistic from Santiment is the fact that the GAS usage for ETH is now at ATH’s; 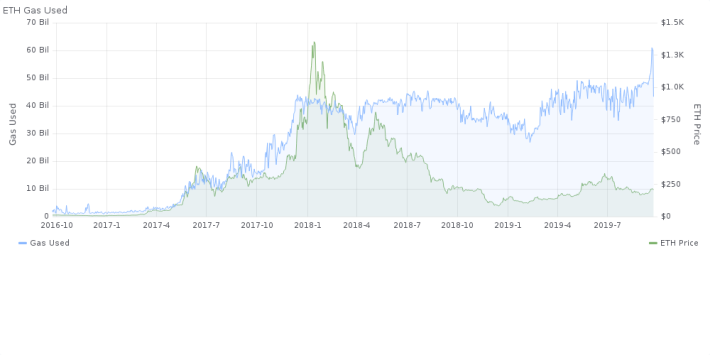 This could suggest that the Ethereum blockchain is being used more as the ecosystem of decentralized applications continues to evolve. However, there have been reports that up to ⅓ of this is being used by one dApp called FairWin. If this trend can continue, and the GAS usage stays high, we could see ETH starting to lift further higher.

The Scalability Effect - Creating An Ecosystem That Can Meet Future Demands

Okay, now let's get to the real issue at hand. This is the real reason as to why I believe Ethereum will return to its previous ATH around $1,400 at some point during 2020.

Ethereum 2.0, a.k.a Serenity is supposed to be a game-changer for Ethereum. The upgrade will introduce the resource-efficient Proof-of-Stake algorithm into the blockchain as well as introducing sharding to achieve significantly higher throughput.

The Istanbul Hard Fork is the eighth hard fork for Ethereum that is scheduled for October 2019. Some people believe that this upgrade is a distraction to Ethereum 2.0 but they do not realize it is necessary for Ethereum 2.0’s implementation.

The Istanbul Hard Fork will incorporate 6 EIPs (Ethereum Improvement Protocols) that will increase the performance, security, and efficiency within the network. The Istanbul hard fork specifically aims to change the data storage process, mining protocol, and code execution. The 6 proposed EIPs are;

Ethereum 2.0 - The Long Road To Serenity 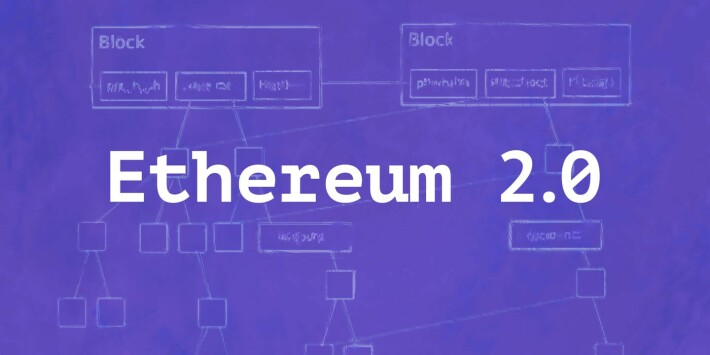 Considering that the scope of Ethereum 2.0 is so large (they are pretty much creating a new blockchain), the roll-out will be gradually done over the course of a few years. The team over at ETH 2.0 has created a roadmap for the ETH 2.0 roll-out and have broken it down into many phases. Details have recently emerged about the first 3 phases which will begin the entire process.

The entire aim of Ethereum 2.0 is to bring the blockchain into a position where it can handle the demands of mass-usage in the future. It will introduce an energy-efficient mining algorithm and will also incorporate sharding to increase the performance of the blockchain.

The important thing to realize is that Etheruem 2.0 is being built on an entirely new platform, meaning it will run alongside the original Ethereum blockchain until the final migration into Ethereum 2.0 is complete.

The first 3 phases of Serenity are as follows; 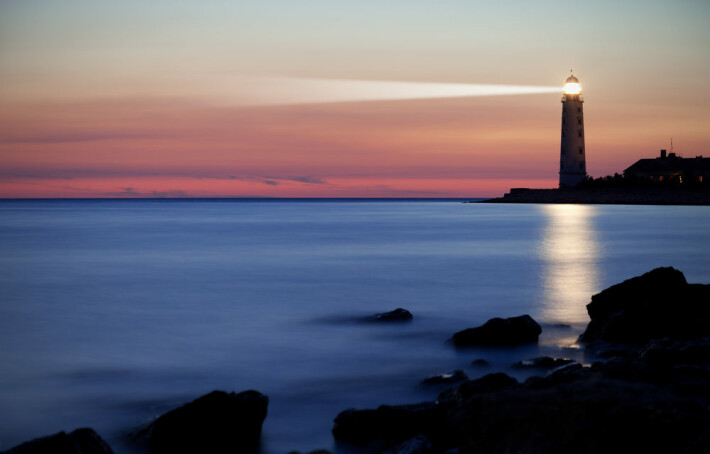 PoW has long been known as a resource-intensive algorithm that requires a great deal of energy leading to the belief that it is very costly and, overall, damaging to the environment. The introduction of PoS will certainly make Ethereum 2.0 future proof. 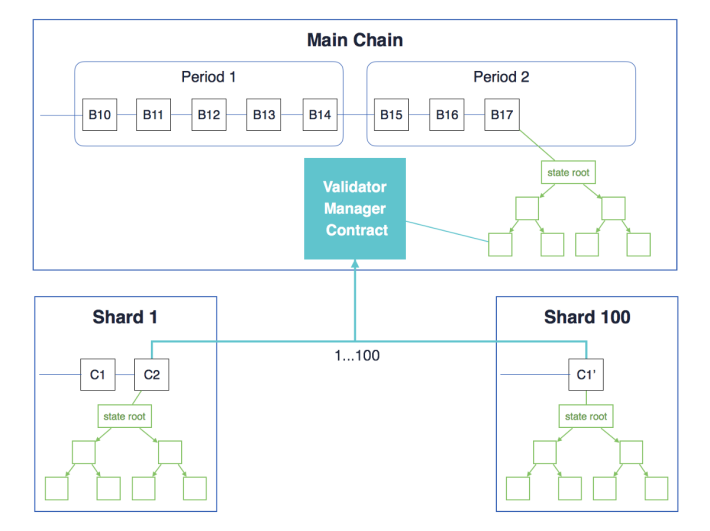 Phase 1 will introduce the first 100 shards that will work in parallel with one another.

Phase 2 - Hello, eWASM, Thanks For Bringing Smart Contracts Back! 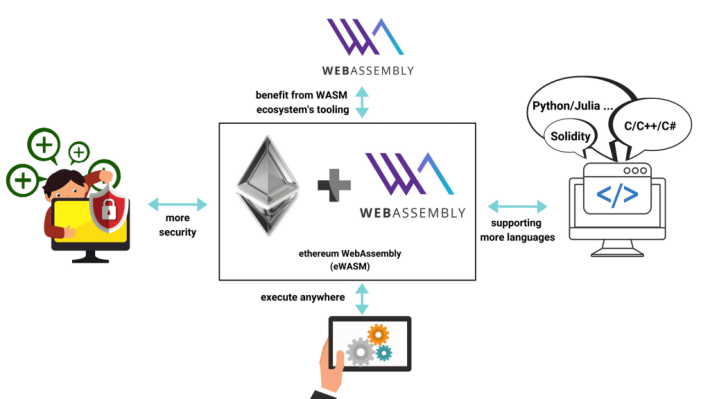 So When Is All This Going Down?

In recent news, it has come out that the developers are making great progress with all major clients now linked to each other through LAN on Ethereum 2.0. This means that the various nodes, that are all written in different languages, are able to communicate and talk to each other. This is an important milestone for the team as it means they can go ahead and launch the first 2 phases of Serenity during Q1 of 2020! 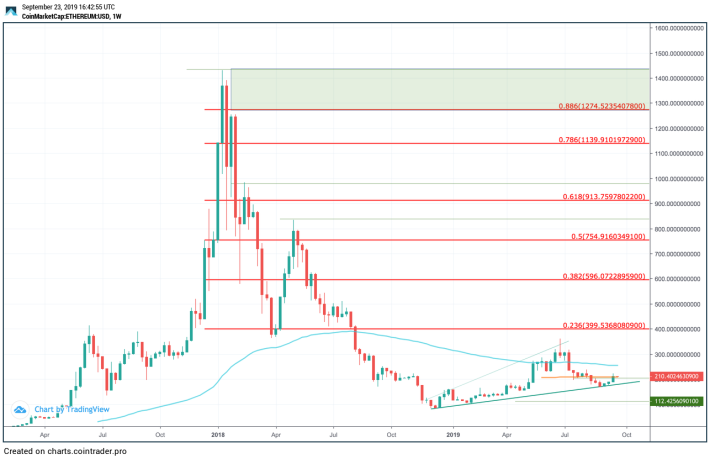 Looking at the long term weekly chart above, we can clearly see that Ethereum has been suffering heavily since peaking in 2018. In fact, Ethereum has dropped by a total of 85% from 2018’s high to the current trading price.

Ethereum started to reverse toward the end of 2018 and slowly started to grind higher during the first few months of 2019. Ethereum managed to climb as high as $300 before meeting resistance and falling back into the 2019 rising support trend line.

As Ethereum 2.0 approaches closer, we can expect the hype to ‘kick in’ - causing a surge in the demand for Ethereum. This could be thought of as something similar to the recent Litecoin halving, seen this year, in which Litecoin soared in the build-up toward the halving. However, instead of a constriction in the influx of supply, there will be a greater increase in the performance of the network.

Let us take a closer look at Ethereum in the medium term and highlight some potential areas of support and resistance moving forward. 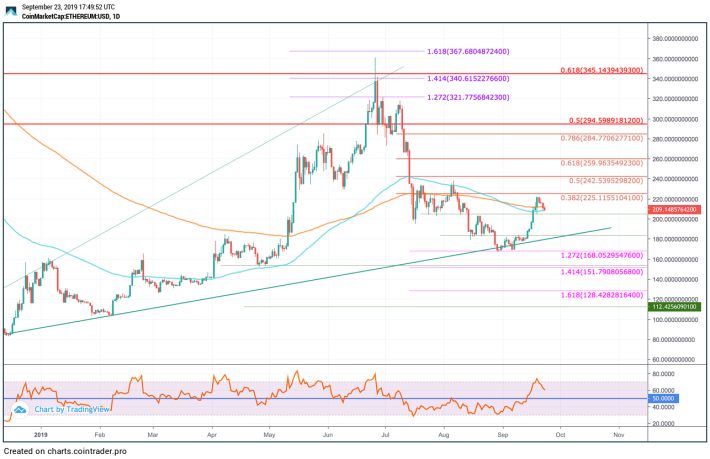 After rolling over at the June 2019 high around $360, Ethereum went onto fall beneath the 100-days EMA and 200-days EMA until reaching support at the rising support trend line that has been in action for the entire period of 2019. After reaching this level of support, we can see that Ethereum managed to rebound higher - allowing it to recover back above the $200 level.

Ethereum is now being supported by the 100-days and 200-days EMA, once again.

In conclusion, I am confident that if development continues as expected for Etheruem 2.0 and it starts to roll out during Q1 of 2020 we should see the demand for Ethereum start to explode! If this is the case, over the course of the year I anticipate price action rising to meet the previous ATH price at around $1,400. For the market to reach this price it would need to increase by a total of 590% from the current level.

The main reason I believe this is STRONGLY possible is due to the fact that scalability has held Ethereum back for a long time. Although it will take a few years, the introduction of Etherum 2.0 will start to put the scalability issue to rest allowing Ethereum to meet the demands of mass-usage on the blockchain.