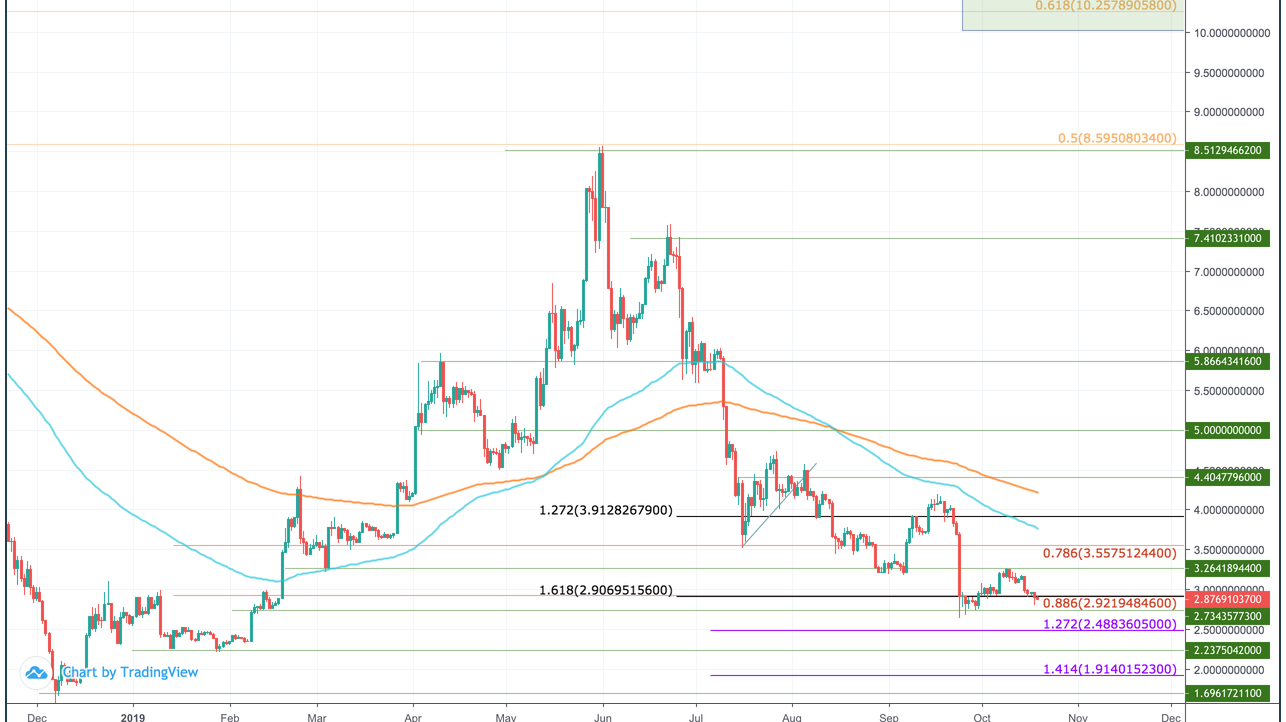 EOS saw a great start to 2019 as it managed to surge by almost 260% and reach the 2019 high of around $8.59 in June. However, since reaching this high, things have been pretty dire for EOS as the cryptocurrency plummets by a precipitous 65% to reach the current trading level at around $2.51 (as of October 23rd, 2019). Yet, we need not worry as this market pattern has been apparent throughout the top 20 cryptocurrency projects and therefore EOS is not the only project to ride the market rollercoaster this year.

Nevertheless, despite the recent solemn market movements, I still believe that EOS has a very strong potential to surge by around 260% in 2020 to reach my target of $10.25. I believe that EOS has gathered too much momentum to not be able to reach these heights in 2020. This momentum, combined with the fact that EOS has expected performance upgrades with version 2.0 and a much anticipated social media dApp on the horizon, leads me to the belief that EOS will certainly reach my $10.25 target at some point in 2020.

In this article, I’ll firstly cover a range of topics that I believe will influence EOS in reaching my $10.25 target during 2020, and then analyze EOS on the long term daily charts to highlight some areas of resistance on the way toward the target.

EOS - The Decentralized Operating System To Rival Them All

Developed by Block.one, a software company led by Brendan Blumer & Dan Larimer and registered in the Cayman Islands, EOS has long been known as the “Ethereum Killer”.

EOS enables the development of commercial and enterprise scaled decentralized applications (dApps) on the EOSIO platform. These dApps function very similar to the dApps deployed on the Ethereum blockchain, though it is important to note that EOS dApps are much more scalable, faster and more efficient than any Ethereum dApp. Furthermore, the EOS structure is designed to make it much easier for developers to be able to deploy and upgrade dApps on EOS.

Dapps on EOS are more scalable because, relative to Ethereum, EOS can facilitate a much higher throughput than Ethereum as it chooses to use a Delegated-Proof-Of-Stake (DPoS) consensus mechanism - which was actually founded by Larimer himself! The DPoS algorithm allows for 21 elected “block producers”(BPs) to maintain the EOS network who are voted in by EOS token holders. The fact that transactions only need validation from 21 BPs allows EOS to have a superior transaction per second rate (TPS). In fact, the all-time high recorded TPS rate for EOS is 3996 TPS - much higher than the 25 TPS capable from Ethereum today.

This quote from EOS sums up their project pretty well;

“A blockchain architecture that scales to millions of transactions per second, eliminate user fees, and allows for quick and easy deployment of decentralized applications.”

The actual EOS token is needed by developers to be able to reserve network resources, such as bandwidth, for dApp creation. EOS tokens are also used for voting on governance proposals and to vote in BPs. Voting requires users to stake their tokens (locking them up) for at least 3 days before they are eligible to vote.

To understand EOS in greater depth, check out this great write-up here.

Although EOS does not currently dominate the dApp industry, taking up only 2 of the top 10 dApps (according to www.dapp.com), there is still usage behind some of their dApps. Looking at the following table, we can see that there are still tens of thousands of users that are using EOS dApps on a monthly basis. Although the majoirty are gambling and exchange type dApps, we can expect further additions to be made as the ecosystem grows. 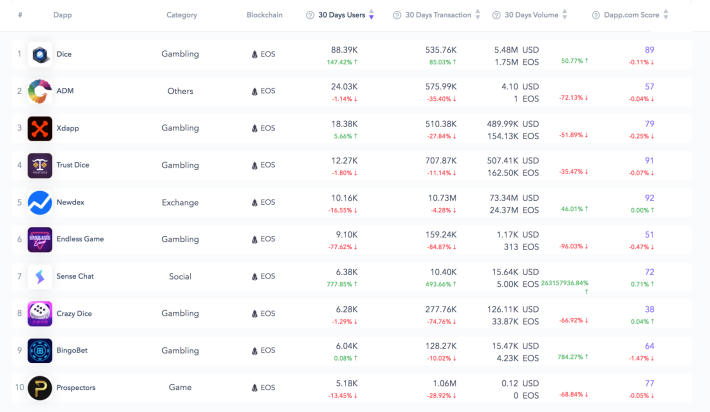 After some great marketing which garnered much attention, EOS announced their upcoming social media platform which is known as Voice. Voice is intended to be a social media platform in which its users are not turned into a product. Today’s social media giants, such as Facebook and Instagram, are designed to use the users. As the saying goes, “If you aren’t paying for the product, you are the product!”

“By design, they run by auctioning our information to advertisers, pocketing the profit, and flooding our feeds with hidden agendas dictated by the highest bidder. Voice changes that.”

Voice will run entirely on the EOS blockchain and is aimed to bring alignment and transparency to the social media industry, effectively bringing the power and control back to the individual user

The team has promised that the product would not let algorithms decide what dominates the social feeds. Moreover, they stated that they will keep away bots and trolls in an efficient manner using a multistep authentication process to make sure every single account is unique and belongs to a real person. This way, everybody plays by the same rules and nobody can get ahead for nefarious purposes.

Block one has invested a whopping $150 million into this project so you already know they are expecting some big things from it. Everyone who signs up for Voice will automatically get an EOS account and users can even stake Voice tokens to move to the top of a chain of comments - If you want your voice heard, you can put up Voice tokens! If someone else would stake more tokens, the first user would get their tokens back with an increment reward according to the stake. Additionally, Voice can only be created by real people communicating or creating great content.

EOS Development Have Some Big Upgrades Over The Coming Months!

EOS had recently successfully conducted a hard fork when they released EOSIO version 1.8.

Just a short two weeks after hard forking, the team announced the upcoming Version 2 of the EOSIO software - an upgrade that is expected to bring some major scalability, performance and security updates to the already superior dApp platform.

One of the most notable upgrades comes in the form of EOSVM, a high-performance WebAssembly (WASM) engine designed specifically for blockchain smart contracts. These are  expected to run up to 12-times faster than the original EOSIO software, according to internal benchmarking, This is because of the more efficient use of system resources when processing smart contracts

Currently EOSIO is running on the WABT engine, however, this engine has experienced issues with unbounded memory allocation, protracted loading time and stack overflows which curb overall performance and reliability

The new WASM engine has 3 components. The first component is an EOS VM Interpreter which is a WebAssembly interpreter providing extremely fast loading, and deterministic time-bound execution. The second is the EOS VM Just In Time (JIT) compiler that takes WASM and generates code on the fly. This allows for very fast executions of WASM smart contracts with significant performance benefits over previous interpreters. The last component is the EOS CM Optimized Computer uses a specialized compiler framework LLVM that leverages a multipass compilation architecture.

So What Does This Mean For The Community (Investors and Developers)?

With this new upgrade, EOS now becomes 12 TIMES faster than the previous version (remember, the previous version is already MUCH faster than Ethereum anyway)! This creates a huge incentive for developers to come and choose EOS to build their dApps upon rather than Ethereum, in turn, growing the entire EOS ecosystem. Developers will know that their dApp will have the room to grow and will not suffer any scalability issues.

For you guys as investors, your EOSIO tokens will appreciate in value as the overall ecosystem grows. This is because there is more value within the network as dApps start to become much more populated. This is just like with Facebook as their shares increase as they gain more users because its network effect is growing for advertising profits.

The new WASM allows for superior performance as can be seen in the table below;

The Version 2 upgrade will also adopt a WebAuthn authentication standard to bring greater security to dapps on EOS. This will allow the use of hardware devices for authentication and signing transactions in a browser without the need for extensions or software.

The last notable upgrade to mention is the EOSIO Quickstart WEB IDE, a new web-based development tool aimed to reduce the barriers to entry for new developers who wish to build on EOS. This will allow new developers to get to the “ready-to-build” stage in minutes. It can run in any browser, regardless of RAM or CPU requirements.

The Release Candidate for Version 2.0 was launched on October 7th to use on the testnet.

Although there is no launch date for the official release, we can possibly expect it to be at some point in 2020.

Development Activity - It's a Big Deal!

Data from Santiment shows that the development activity in late September 2019 rose quite dramatically, followed by a bullish trend of 'dev activity' so to speak that kicked off right with the beginning of 2019.

That's pretty good consistency of work which is a good sign about EOS.

Sadly, we can't say the same about the price that started to decline massively right after May and it is still looking for find its bottom. Let's dig more into that in the next section! 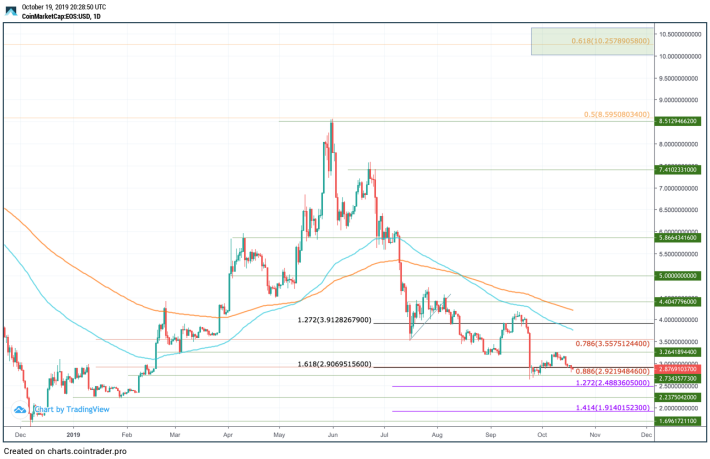 Analyzing EOS from the chart above, we can clearly see the ascension witnessed in the first half of the year. Price action managed to find the 2019 low during February as it reached the support at $2.23, allowing for the market to rebound higher. Over the following months through March and April 2019, we can see that EOS started to surge aggressively as it blasted its way above both the 100-days EMA and the 200-days EMA. There was a golden crossover signal during May when both of these EMAs crossed over each other, allowing the market to continue to surge further higher.

It didn’t take long for EOS to collapse beneath the support provided by the 100-day and 200-day EMAs after it plummetted beneath them both in early July. EOS then went on to fall much further lower until support was found at the $2.73 level - at which point it had already dropped by over 60%.

As of October 2019, the EOS market is strongly bearish. For this bearish slide to continue, we must see EOS breaking beneath the support at $2.73. IF EOS was to slip further lower beneath the 2018 low at $1.69 - this could drastically affect my 2020 prediction. However, I do not expect EOS to drop this far by any means.

If the buyers can proceed to clear the resistance at $10.00, they will be free to make an attempt at mt 2020 target of $10.25. There is some very strong resistance at the $10.25 level which is provided by the long term bearish .618 Fibonacci Retracement and therefore, significant momentum will be required to overcome this level.

I firmly believe that EOS has every chance to rise by a steep 260% from the current trading price of $2.88 (as of October 2019) to reach my 2020 target at $10.25. EOS has the potential to reach here due to the fact the development is not slowing down at all. Over the next few months, we can expect the launch of EOSIO Version 2.0 which will improve the performance, scalability, and security of the EOS network. Additionally, the upcoming launch of their social media platform, Voice, will certainly bring a wealth of attention to EOS and is most likely expected to be their widest used dApp.