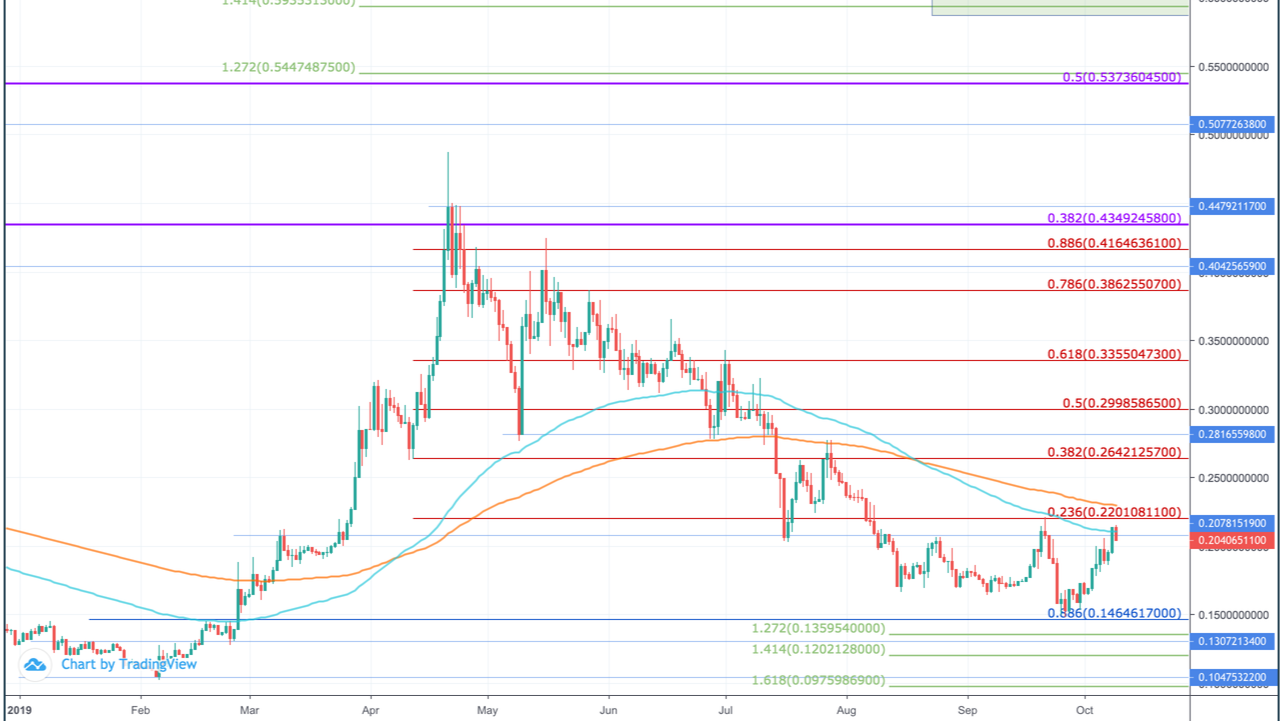 Basic Attention Token (BAT) has seen a whipsaw like market thus far, as of October 12th, 2019, after rising by over 375% to the yearly high around $0.39, and then plummeting by over 60% to where it currently trades at around $0.19. The utility token that being powered by the Brave browser, and it’s huge ecosystem of over 30 million downloads on Android, is still on the bullish footing during the commencement of the final quarter of 2019 as it looks to make its way back toward the $0.30 level.

BAT is the cryptocurrency at the heart of a decentralized web browser called Brave. The Brave ecosystem intends to disrupt the digital advertising industry by distributing the revenues amongst all parties involved - including the viewers! Most importantly, the Brave browser is designed to be privacy-preserving - meaning you know your data is not being sold by 3rd party companies. The growth of Brave and BAT has truly been outstanding as the browser has amassed over 7 million active users.

I believe that the growth of BAT in 2020 will largely depend on the growth of the Brave ecosystem. If the browser can continue to onboard as many users and publishers as they have been doing so far, I believe that BAT could easily surge by over 180% to reach $0.60 at some point during 2020.

In this article, I’ll firstly cover a range of topics that I believe will influence BAT in reaching my $0.60 target during 2020 and then analyze BAT on the long term daily charts to highlight some areas of resistance on the way toward the target.

Let’s face it, the majority of cryptocurrency projects really do NOT have any active products with an actual use-case right now. However, BAT is actually one of the VERY FEW projects that has a specific use case that will continue to grow over time.

You see, as previously mentioned, BAT is the heart of the entire Brave ecosystem. It is the native cryptocurrency that is loaded into every Brave browser as default and will be used to fuel all the transactions on the Brave browser.

Brave intends to create an entirely new digital advertising system that distributes advertising revenues fairly and promises increased ad efficiency by utilizing “user attention”. The new platform will effectively remove the middlemen within the advertising industry, such as Google and Facebook, who are known to take up to 70% of all advertising revenue.

BAT will allow users to be paid for viewing advertisements on the Brave browser. Furthermore, BAT will also be used by users to tip their favorite content producers on a regular basis.

Total Number Of Brave Browser Publishers Headed To The Moon

You only need to head over to BATgrowth.com to get a clear view of how quickly Brave has been growing in the number of publishers. 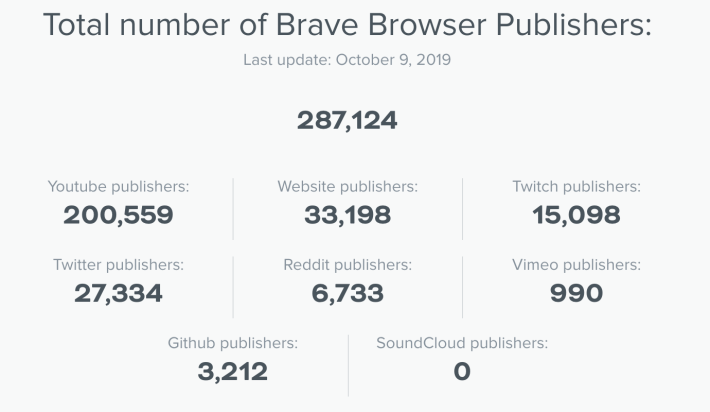 Brave has already managed to onboard over 287,000 publishers who will all be able to receive tips in BAT as they continue to create content on their respective platforms. There are already over 27,000 Twitter publishers and 15,000 Twitch streamers signed on to be content creators on Brave. However, the most staggering statistic is certainly the 200,000 YouTube channels that they have as publishers; 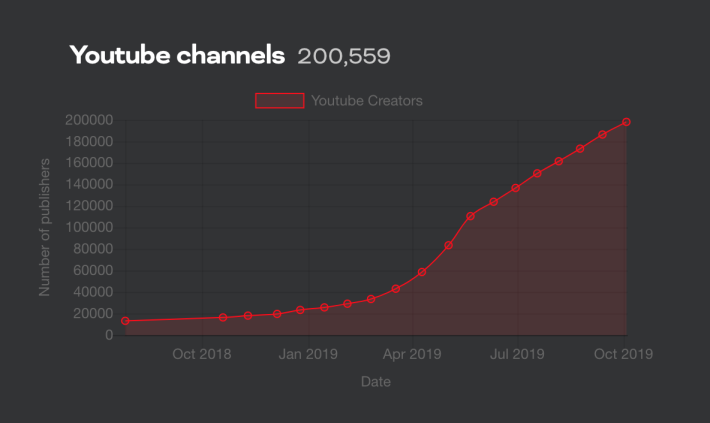 The number of YouTube channels that are becoming verified Brave content creators and accepting tips in BAT continues to grow at an alarming rate. Some of the biggest creators include Trap Nation, a channel with over 26 million subscribers. Other channels include Bart Baker, Phili DeFranco, VICE, and Khan Acadamy.

Another interesting statistic is the steady growth of websites that are become verified Brave content publishers; 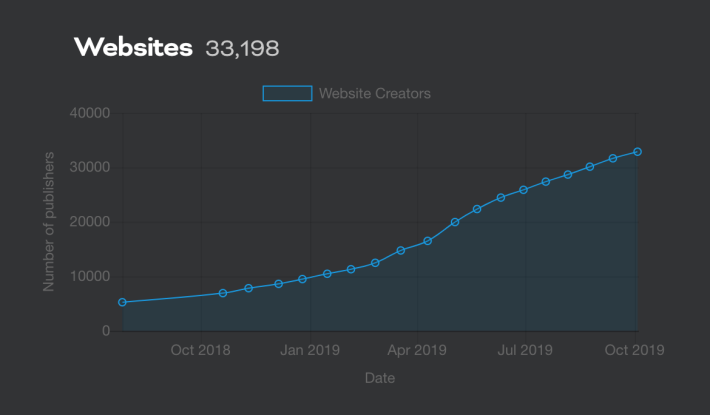 The rate of verified website creators is growing but at a steadier pace than that of YouTube’s growth. However, this may all be set to change after one of the biggest websites in the world decided to become a content creator this year. 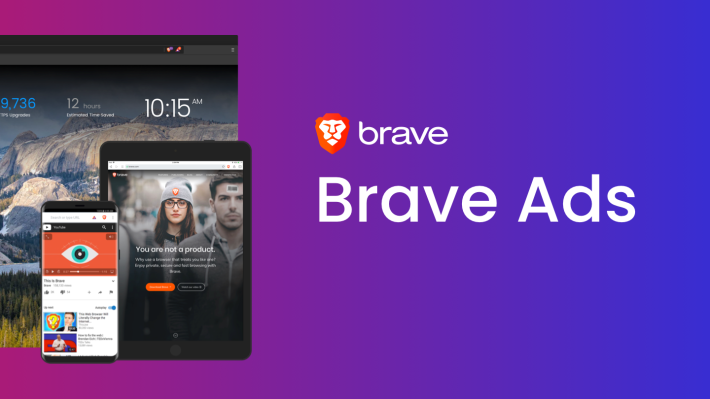 After a very long roll-out, that had caused many to question if Brave were struggling to develop the software, the official product from Brave known as Brave Ads officially went live in April 2019. Brave Ads will be an integral part of the Brave Rewards program as it will be the cornerstone for users to be able to view adverts and earn BAT.

Brave Ads was available to beta testers for a while but was officially launched on the standard desktop release in April. This now means that users of the desktop version of Brave can start to earn BAT as they view the adverts that are being delivered through Brave Ads. Brave Ads is initially only available to users within the USA, Canada, France, Germany, and the UK - with more locations coming in the coming months.

It is important to note that users are not forced to view these advertisements as Brave is generally focused as a privacy-centric advertising-free web browser, however, there is the option to switch on Brave Rewards if a user is happy to receive adverts. The user can choose how many adverts to see per hour, ranging from 1 to 5 and is paid out monthly in BAT through the Brave Rewards program. 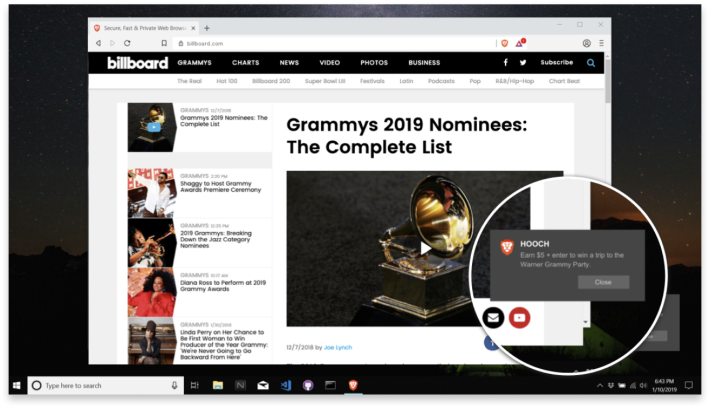 Users have already even started to receive their payouts, with one user earning around 34 BAT after daily usage for around 2-hours per day for a few weeks.

In fact, Brendan Eich, CEO & Founder of Brave, has stated that a regular user of Brave Rewards can expect to earn up to $70 per year. Furthermore, he believes that as the growth of the BAT ecosystem increases, the rewards earnings for users viewing adverts can reach up to $224 or higher. If users start to earn around $200 per year for using Brave, we will certainly see the demand for BAT increase exponentially as users flock for their perceived “free” money!

With Brave Ads now officially live, we can expect Brave to continue to improve on the infrastructure and introduce Brave Ads to the rest of the browser platforms. We can also expect the value of the advertisements to increase exponentially as Brave continues to fine-tune their algorithms for maximum efficiency.

BAT Network Growth - Something To Admire! 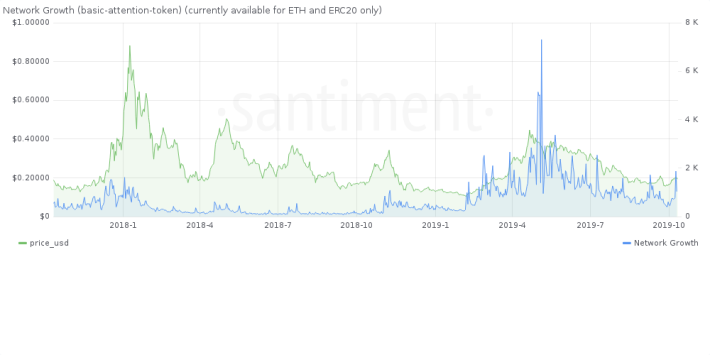 Looking at the data above, we can see a clear difference between Network Growth in 2018 and in 2019. In March 2018 the Network Growth remained around the 200-300 level. However, in March 2019 the Network Growth surpassed the 1000 new addresses per day level. This shows the truly staggering rate of growth that BAT has experienced over 2019 alone and this should continue to increase as 2020 starts.

Tipping With Brave Just Got A Whole Lot Easier!

In August this year, Brave had announced that they had expanded their platform to introduce tipping in BAT on Twitter! Users that are accessing Twitter on a Brave browser will now be able to tip individual content creators on Twitter with the BAT cryptocurrency.

Users that visit Twitter on Brave simply have to enable “Brave Rewards” in their browser settings and they will instantly see the “TIP” button embedded within each tweet. 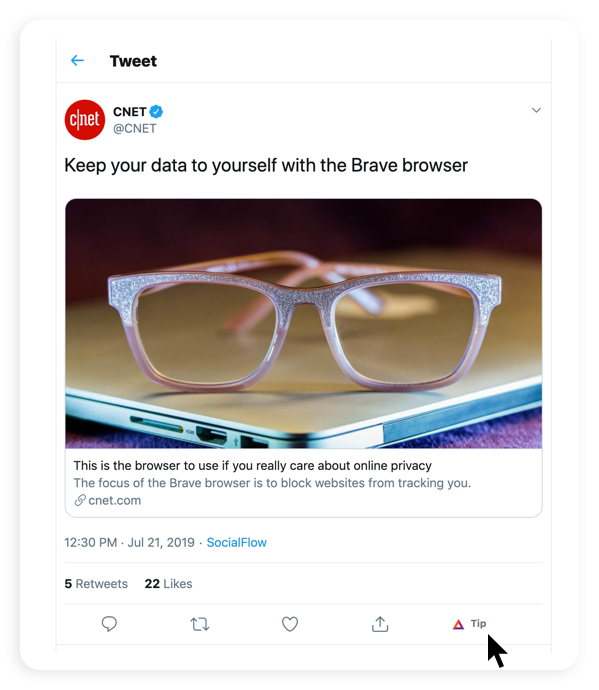 When a user clicks the Tip button they will be able to send a tip in BAT to that Tweet content creator. They will also have the ability to set up a recurring payment to that content creator to support their content in the months to come.

Users have already been able to tip content creators on verified websites, YouTube creators, and Twitch streamers. This addition to Twitter is setting a strong trend in which users will be able to tip creators in BAT on any social media platform in the world. Brave already has plans to integrate tip facilities within Reddit, GitHub and Viemo so we can expect the largest social media platforms to follow similar steps down the line!

Brave Sync - Keep Everything Together But Stay Private

The last cool feature from Brave to highlight is their recently released Brave Sync feature. This allows the users to sync their browsing data between devices through a secure link. All devices within the sync are encrypted end-to-end with the user being the only person to control the keys to the encryption. 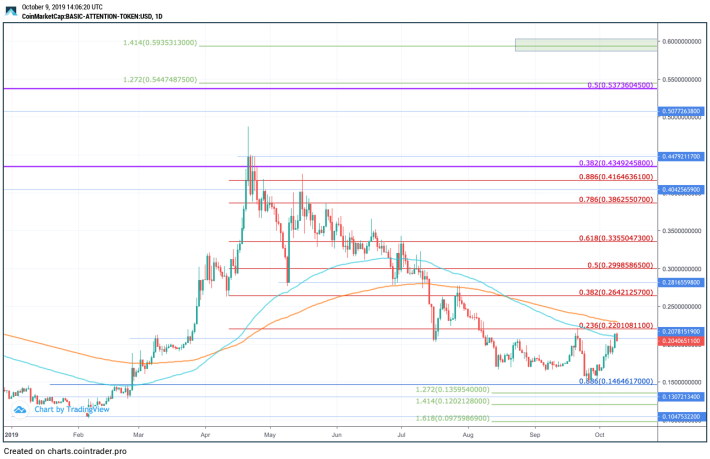 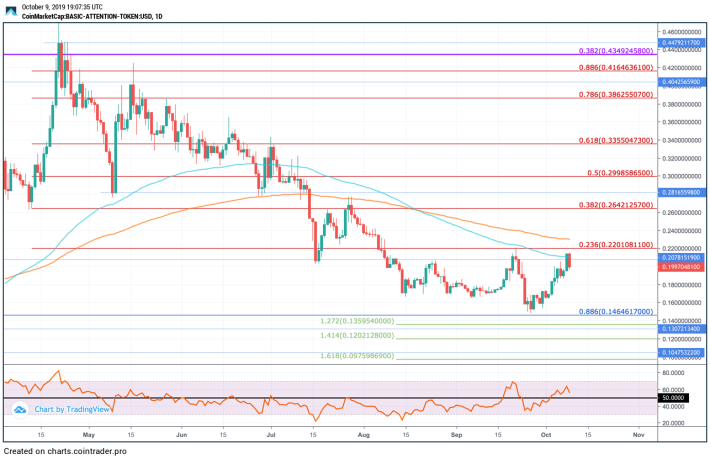 Taking a look at the long term daily chart above, we can clearly see the market hike that BAT had enjoyed from February through April when the cryptocurrency surged from $0.1 to as high as $0.49. However, since placing this high, BAT has rolled over and has been falling ever since.

The cryptocurrency has recently found support at $0.1464 where a rebound was seen. This support was provided by the .886 Fibonacci Retracement level (drawn in blue) which is measured from the February 2019 low to the April 2019 high.

Since rebounding from this level of support, BAT began to climb higher and has recently met resistance at the 100-days EMA at around $0.20.

The market is starting to look slightly bullish after rebounding from the $0.1464 support level. However, the coin has still not managed to break above the resistance at the September high and therefore is not yet to be considered as a bullish market.

BAT certainly has the potential to increase by around 180% to reach my target level of $0.60 at some point during 2020. In fact, I think $0.60 is pretty conservative and I would not be surprised to see BAT at $0.80 by the end of 2020. This is all because the Brave browser is growing at an astounding rate.

Since launching, Brave has managed to sign on over 200,000 content creators that are all able to accept tips through BAT on the Brave browser. As this number of content creators increases, BAT will continue to gain increased exposure which should lead to an increase in price. Furthermore, with the recent release of Brave Ads, I believe that more people will be switching to brave when they realize that they could earn upward of $200 to browse on Brave.