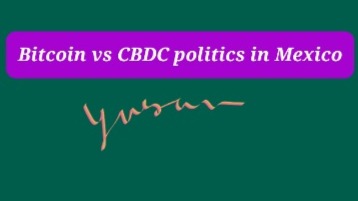 Bitcoin vs CBDC politics in Mexico

Senator Indira Kempis, who has advocated for making "Bitcoin" legal tender in Mexico, has instead drafted the bill to create a Central Bank Digital Currency (CBDC), this has brought uproar in Mexico.

Senator Kempis' Argument
CBDCs are thought to be against Bitcoin's principles, therefore Indra Kempis' move has enraged Bitcoin supporters in Mexico. Kempis, on the other hand, claiming CBDC as a crucial step in the recognition of bitcoin.

Senator Kempis has argued that only the Mexico Central Bank has the authority to recognize any currency in the country, so CBDC is the only method to address cryptocurrency in Congress; otherwise, there would be no conversation at all.

Public Displeasure
Even while Kempis' reasoning is diplomatic, it hasn't been enough to appease Mexico's crypto enthusiasts and quell their displeasure. Some argue that CBDCs will infringe on citizens' financial privacy. People are claiming CBDC is the stage of economic control, not the validation phase of bitcoin.

Facing The Music
Indira Kempis may have made this move on the basis of any thought, policy, or plan, but she is losing popularity as a result of her inability to convey her side to the public satisfactorily.
Bitcoin enthusiasts who where supporting Senator Kempis just before her CBDT move, are now questioning her intentions. Kempis' current situation is that she is unable to back down or find support in order to go forward with her plan.

Possible Conclusion
Although not everyone is aware of what is on politicians' minds, action speaks louder than words, thus even if Senator Indira Kempis discusses Bitcoin in the Mexican Congress using the CBDC, people will not trust her until she strives to legalise Bitcoin rather than the CBDC.