Be Cautious if you Plan on Buying Crypto Currently 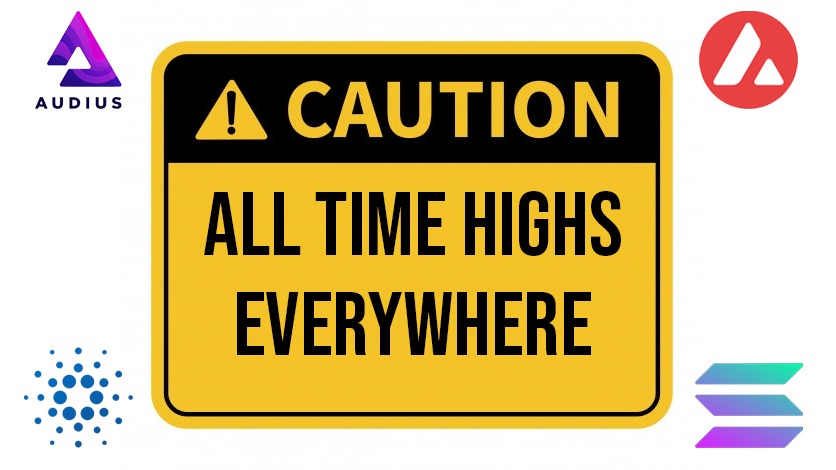 Be Cautious if you Plan on Buying Crypto Currently

August has been quite fruitful in the crypto-space and it's visible all throughout the different tokens and coins.  We've had new and old tokens come into and come back to the top 100 or just among the top coins. Specifically Audius and Avalanche have had quite the bull run in just the past week. Now that I think about it, it's been quite the month for crypto that starts with the letter A. AVAX, AUDIO, ADA, ATOM, AXS, ALGO, AR, AMP... wow, that is a really weird coincidence. Please don't invest in something cause it's name starts with A.

This movement is overall awesome if you invested at any point after the major correction ETH and BTC had just a few months ago. As the frontrunners and dominant forces in the space, their movements have an effect on every other project even if they aren't directly interconnected. This is just how it is right now but it's not what I wanted to focus on. Their movement is likely going to continue bullishly and pull with it the rest of the market. However, major gainers that have set new ATH's recently might not be in for a smooth ride during this time.

With the momentum Cardano and Solana had individually it's highly unlikely that they will continue to go up for much longer. I, of course, am no expert but I'd like to throw in my peg anyhow. ADA has been moving upward, likely on the news of a smart contract date being set. This is great news but there are still 2 weeks until that happens and there are things that need to happen in the meantime too. Some have stated that the only ones buying it now are retail buyers and FOMO's, I have to agree with them as the current price of ADA is way too high to net any substantial gains and not be at an enormous risk of having a massive correction. Despite this, it continues to climb at a steady pace, so if you want to invest, go ahead but I have to put a warning sign on it.

The situation is the same with a lot of the major growers and even some that haven't gotten to ATH's but are over 50% there, which is most of the top 100. I noticed this while researching a possible value buy in the market but found none inside the top ones, outside it there is likely a lot of potential but there are other risks to that part that aren't in focus here.

All in all, I personally won't be buying any new assets currently, I took my chance when the correction happened and it payed off, I'll just wait it out for the next few weeks and see what happens after. I may lose out on some minor gains in the meantime but I honestly don't mind it at all. In my head, it's all about risk management and good timing, I advise the same to all of you.

I'm also not going to go around spewing bearish sentiment, if this bull continues for a longer time I'll be thrilled. I'm just putting out the warning for anyone that would listen. Let me know what y'all think and if you disagree, why?

Thanks for reading, hope you found it helpful.