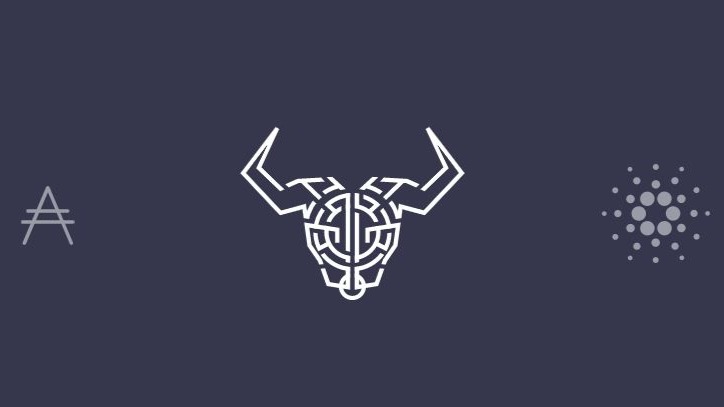 My Guide to Choosing a Cardano Stakepool & How Delegation Works

Cardano has finally hit a bull run alongside other altcoins, with a gain of around 300% increase in over three months! It's about time that Cardano will be taken seriously as the next generation blockchain ecosystem. While Bitcoin & Ethereum are the main players such as Microsoft & Apple in the stock market, Cardano is the stock equivalent of a Tesla, as mentioned in my previous article. As more people joining in, many will still be spoilt for choices as to how to choose the right stakepool to delegate to. This article is for the people who are still confused about which Cardano stakepool to choose from a delegator's point of view, because I'm, like most of you, have never run a stakepool before.

There are some simple rules to follow when choosing a stakepool. Every stakepool has a chance to mint a block, but the number of ADA being delegated to will determine your luck of minting the next block. It's basically a lottery game where in every 10 seconds, a lucky participant (in this case, a stakepool operator) will be chosen to mint the next transaction block and place it on the Cardano blockchain. The more ADA being delegated to that stakepool, the higher chances the stakepool will be chosen to mint the next block and earn you ADA. However, this does not mean if you choose a stakepool with the most ADA delegated will earn you the most rewards. There are three main parameters that you need to understand while staking: k, a0 and the d parameter.

This video sums up the meanings behind the parameters. The takeaway is that k will determine the limit of how many ADA can be staked on the stakepool. More than this, your staking rewards will be diminished. As of today, the maximum number of ADA a stakepool can have is 64 million ADA. The d parameter is like a ratio of the number of stakepools run by the community over the total stakepools where some of the stakepools are minted by the Cardano team itself. It will reach a point whereby 100% of Cardano's blockchain will be maintained by the community stakepools. a0 basically explains about how the pledging amount can affect your staking rewards. To further simplify all this, let's look back at the stakepools selection page.

I won't be reviewing who I delegated to as this is not a sponsored article. For this demonstration, I'll be using my Daedalus Flight Wallet.There are a total of 1330 stakepools currently running the Cardano blockchain. The green bars show whether if the pool is saturated or not. The orange ones are the pools that are oversaturated and should be avoided so that you won't lose a major amount of your rewards. You can also see most of the top 90 performing stakepools have their ADA almost saturated or already oversaturated. Personally, based on this image alone, the safer option is to choose a stakepool between the 50% to 75% to give a 25% to 50% more safety factor in case a Cardano whale decides to delegate the full amount in your stakepool. When the pool reaches approximately the 90 to 95% saturation level, I'll redelegate my funds to other stakepools. It's entirely up to you to decide when you'll need to redelegate your ADA, but be aware that it'll take 3 epochs before your ADA will be fully redelegated. Rest assure, you'll still be earning your rewards in the time being. (Epoch = 5 days) 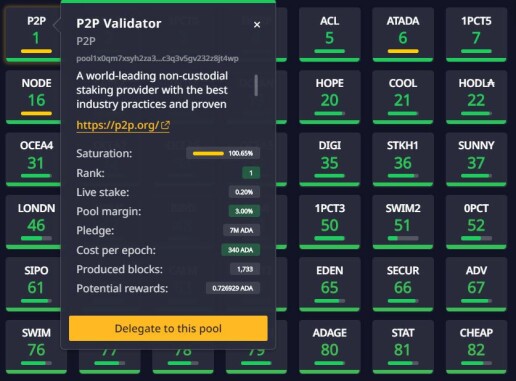 Now comes the next piece of information that you need to know. When you click to any stakepool, you'll see information like this. You can click on their links to understand the team behind those stakepools and what they are doing. I've already explained saturation just now, so the next information are essential as the first. Live stake is the ratio of the amount of ADA staked on that pool over the total number of ADA staked. Pool margin is the stakepool's commission fee from the total ADA rewards earned in an epoch. Pledge is the amount of ADA contributed by the stakepool operator to maintain the security of the network. Cost per epoch is a tax that will be given to the Cardano Treasury. Produced blocks are the total number of blocks minted during the pool's lifetime. Potential rewards are the estimated number of ADA rewards you'll be earning every epoch for a given amount of ADA you staked.

Another way of explaining these is to give an example. Let's say after an epoch, P2P manages to mint 10,000 ADA for that epoch. minus 340 ADA as tax and its commission of 3%, this would mean a total of 9670.2 ADA to all the delegators, depending on how much ADA you staked. Let's say 60 million ADA in total is delegated there, if you are delegating 1 million ADA, your potential rewards will be (1/60)*9670.2 = 161.17ADA. Note that the potential rewards is not accurate as your rewards will fluctuate depending on how lucky your stakepool is in getting selected to mint a block, but the average ROI per year would be around 5%, compounded every epoch. Technically, you'll be earning rewards 6 times in a month, so it's better than other platforms who offer you weekly rewards.

There will be a small fee if you first delegate to a pool or redelegate to a new pool. However, the fees are very minimal. On average, I'm only paying 0.17 ADA for any delegation process made. Unlike many other projects, the rewards you're earning are automatic, meaning that you don't have to keep on confirming transactions like what you normally did in MetaMask, set gas fees, or even have to manually click and claim your rewards. It will be distributed to you after each epoch ends. Many Cardanians have repeated this but I'll repeat here again: Your ADA does not leave your wallet or locked during delegation, meaning you can send or withdraw your ADA while your ADA is still delegating and earning rewards! So proud to say this as normally most of the projects would require you to lock your funds, but Cardano does not.

I'll share how I normally choose a stakepool. For a start, I'm a firm believer of climate change, so I'm not a fan of the proof-of-work protocol. I like to delegate in pools that at least will bring value to the community, not just in the Cardano community circle. There are pools out there who uses the pool margin to donate to charities. Some also will use renewable energy such as solar to power their homes and run the stakepool. I'll also make sure that the pool itself is generating rewards for me on a consistent basis, so I would delegate to a pool with around 50% to 75% saturation levels to have more luck in minting a block without having the risk of oversaturating when a whale comes by. A 2% pool margin or lower is acceptable for me, however I would be open to higher pool margin if the value that they are creating helps many communities to thrive. I think a lot of you would prefer to maximize your rewards by choosing the pool with the lowest fees, so I'll leave that up to you to decide. There are pools even offering 0% pool margin, but you would need to question them as to how are they covering their expenses. Any amount of pledge can be seen from all of the stakepools, ranging from the low 10ADA to as much as 7 million ADA that you saw from the above example. Higher pledge would give you a higher sense of confidence that the stakepool will be here in the long run to maintain the blockchain network, so it's best to choose a pool with a higher pledge.

Another important information that is still very confusing to me is the ranking system. If you scroll down to the stakepool, you'll see all of these stakepools that are not ranked. All these stakepools placed here that are ranked with "*" meant that the rewards they are earning are currently zero. However, there are also ADA that are staked in those pools and are earning rewards. This tells us that even though the stakepool has the lowest ranking doesn't mean that they are not minting blocks. Just ignore this and find the stakepools that suit you with the help of these tools that are recommended by all Cardanians: pooltool.io and adapools.org to track the progress of minting blocks for each stakepool during an epoch. It's true that a lot of these pools are not minting blocks, but not all of them as you can see above.

Cardano's best feature is to bring the most decentralized way of incentivizing rewards to the community, where everyone can learn to become a stakepool operator and have delegators supporting their favourite stakepools. It feels like finding the right family that you truly belong. So happy stakepool hunting to all new and existing Cardanians as we're gunning to be the number one blockchain space! Feel free to share your thoughts on the comments section or if there's any information that I'm missing so I would gladly add more information if needed.

A side note to all the stakepool operators, please don't bombard your advertisements on my comment section! I have left a reddit link here which is called r/CardanoStakePools so that the readers can access to your advertising there. I've also found twitter and reddit groups to have the best communities to help you out if you're in doubt or are still in search of a stakepool.

Cryptocurrency experiences from a Malaysian perspective