THE TRUTH HIDDEN ABOUT PRESEARCH YOU NEVER KNEW; (what they failed to tell you!!!) 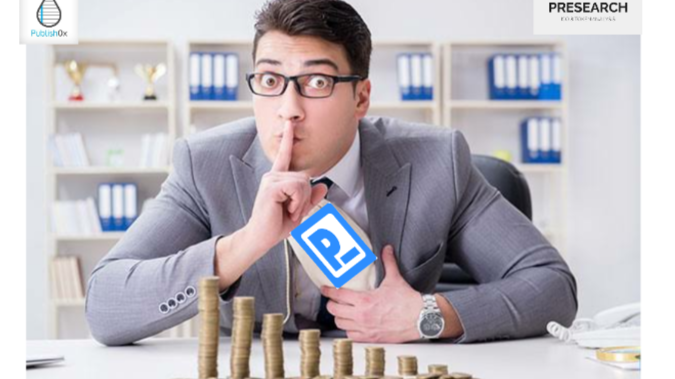 THE TRUTH HIDDEN ABOUT PRESEARCH YOU NEVER KNEW; (what they failed to tell you!!!)

It may suprise you to know that presearch is more or less a community owned cryptocurrency project than a search engine, we will prove this in a giffy.

The fact still remains that no search engine can actually be fully decentralised, yes we said that....

What is a Search engine? 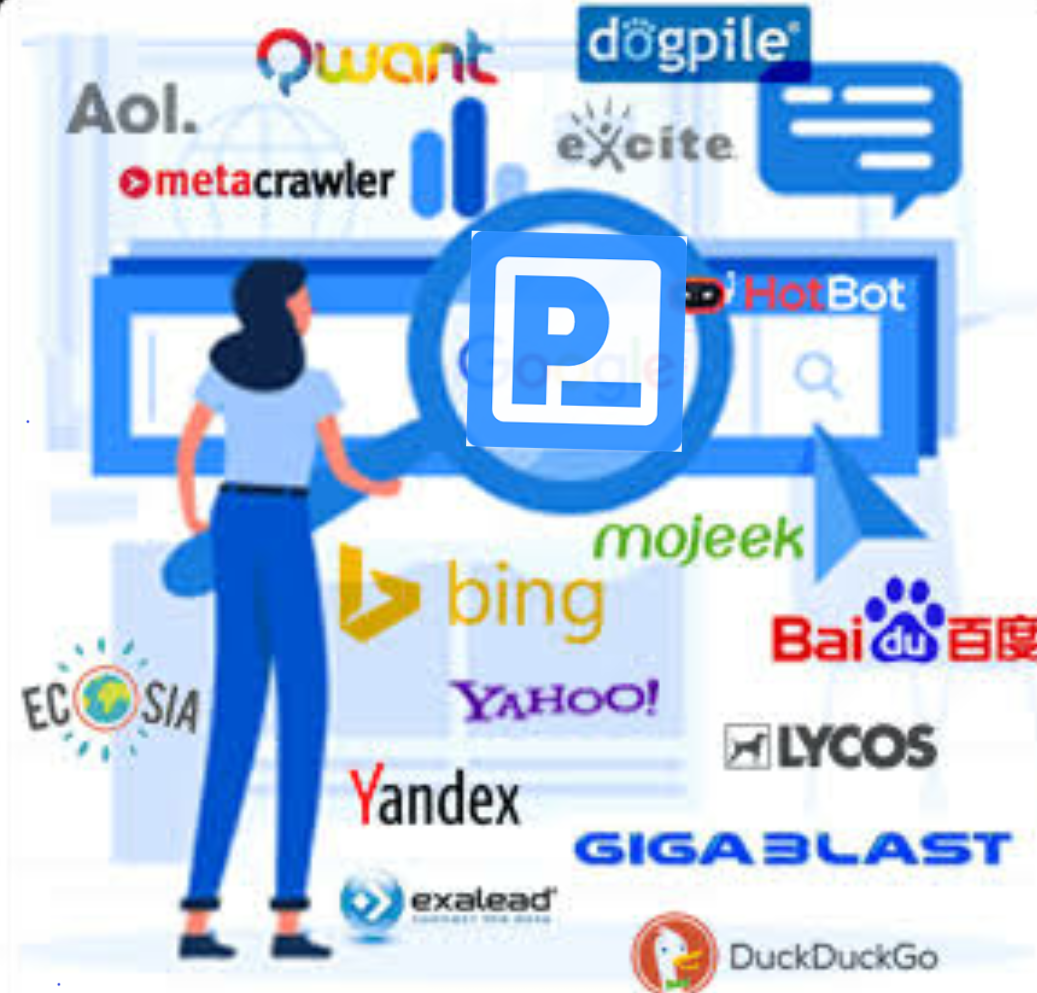 A search engine is a software-based designed tool that enables users navigate around the web in other to search and locate information on the World Wide Web (internet). Popular examples of search engines are Google, Presearch, Yahoo!, MSN, Mozila, and Opera, etc.

While most of these major search engine platforms have been trying for decades to monopolize the internet, others try to become decentralized so as to make the internet free and available for all, not minding your location or position.

The search engine aspect of presearch platform is serving as an additional project(Branch) for the presearch token itself.

In this article, We will be breaking down the Preasearch protocol in detail while adding the various truth hidden away from you for almost a decade now.

One may ask what is presearch, and why do they have to be decentralized and at the same time tokenized???

You might not be aware of this but we have been enslaved for many years by "The Big Search engines", working tirelessly for them, feeding their data banks yet not been paid or recognized. What started as a free project have turned into a tyranny.

Well on the other hand, presearch is a community owned and verified decentralized cryptocurrency platform, that have introduced and revolutionalized a new form of decentralized search engine project that aims at solving three (3) main problems experienced by many users of various search engines around the globe; These problems include:

Most of us aren't aware about this but our search history and data are all saved and recorded by most of the search engines out there even the "Google" itself.

Truth 1; Presearch on the other hand allow users to chose their privacy setting, giving them the full right to decide whether or not they want their data to be shared or saved.

-2 Payment for contributing value to the ecosystem;

if we are being paid by most search engines in respect to our data, contributions, comment, ads, time, research, etc, most of users by now would have been millionaires, but "No" most of these major search engines collect our data, sell it out to big organisations/ firms with or without our consent, get paid and never give us our commission.

Presearch on the other hand having put this into consideration have designed a means of paying their users for their time and postive contributions to internet society, This was very easy for presearch to actualize because there are more or less a cryptocurrency-like platform, therefore integrating of their cryptocurrtency (PRE) into the presearch reward/tipping wasn't much a problem for presearch.

This answers "why" presearch is tokenized, if we actually contributed to data banks like most of us do without knowing for these major search engines then we ought to be paid for the services we rendered, hope you guys are with us on this??

Truth 2: Since presearch is already a fully working cryptocurrency project, they have basically incoperated their token "presearch token" just like publish0x into their presearch search engine, thereby rewarding/tipping users who have actually by any means contributed postively to the presearch ecosystem/ the internet world.
Presearch belives that a good concept suppose to be paid for unlike majority of search engines that ignores users right.

- Decentralization of the search ecosystem;

The concept of decentralization is now worldwide all thanks to cryptocurrencies, presearch have tapped into this unmined aspect of cryptocurrency, giving users right over the data been generated by them.

- Truth 3: it will be easier for a donkey to pass through the needle pinhole than a privately owned organizations to become decentralized, that is why we stated earlier on that presearch is more or less a community owned cryptocurrency (token) than a search engine, this means that presearch can actually achieve their decentralization dream.
This means that search engine aspect of presearch although been founded by Colin Pape, is now fully community owned and decentralized, therefore decisions ought to be taken in respect to how it's been done in the cryptocurrency sphere ( by voting or polling). Therefore users are rest assured that no new laws/rules or updates will be imposed overnight on them without their prior notice and general participation.

Who are actually the team behind " The presearch project" and what motivated them?? 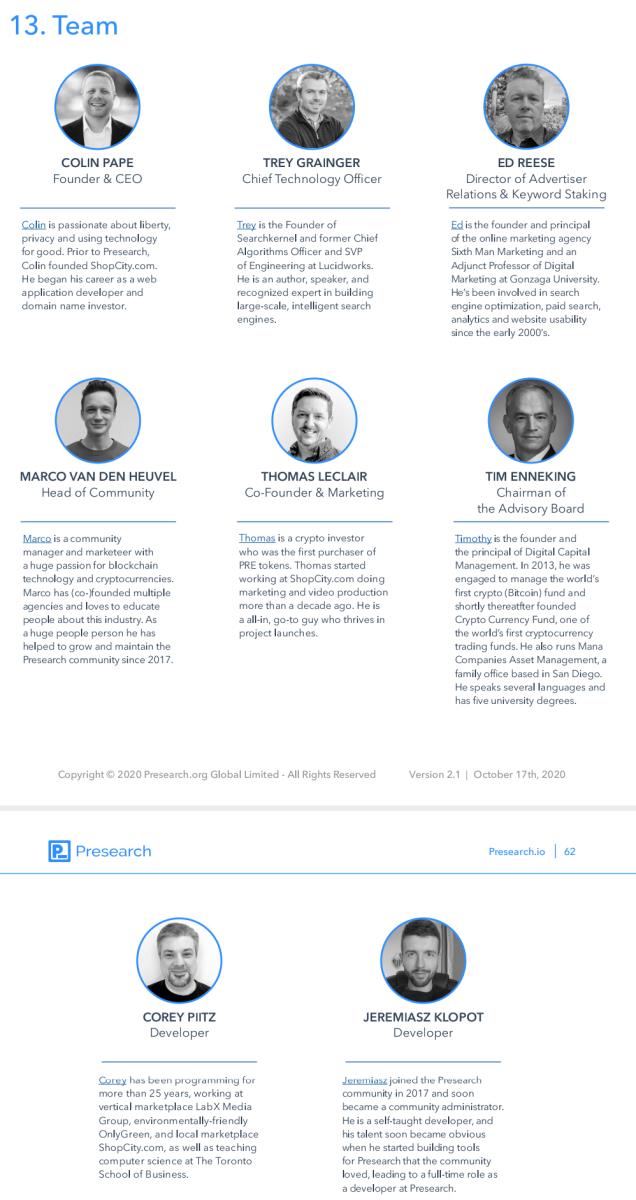 Although the presearch project was founded by group of geniuses with Colin PaPe as CEO, Grainger as CTO, and Tim Enneking Chairman of the Advisory Board, presearch, presearch has more or less become a community owned project.

As of now, presearch ecosystem has more than 1.5MRegistered Users, 7700+ Telegram Members 9,900YouTube Subscribers, the growth chart of presearch indicates that before the end of 2021, presearch will have upto 50million+ registered users.

The key motivational force behind the presearch project has always been to prevent monopolization of the internet and of course reward of good researches.

The truth why most people are migrating to presearch;

- Involvement; owing to the fact that presearch works just like cryptocurrencies, ie involving its community in every decision, users tend to be fully involved and they feel like they are part of a great project which by the fact there are.

Data/information Control; Gone are thoes days when users feel so powerless in the hands of these self acclaimed big search engines, people now want to be fully incharge of their data/information and this they know can only be actualized by the use of a decentralized search engine platform; "Presearch".

Privacy; Being able to feel safe while accessing the internet is as important as browsing information on the internet itself, presearch respects users privacy, it does not store/save any personal information of the user by default, presearch queries are handled by a decentralized network of nodes running open source software.

Users Reward; Presearch specially rewards its community member that performs/Participates in certain task like;- searching on presearch, operating a node, and referring others to join Presearch. There will be more improved opportunities to earn rewards.

THE TRUTH ABOUT THE CRYPTOCURRENCY ASPECT OF PRESEARCH. 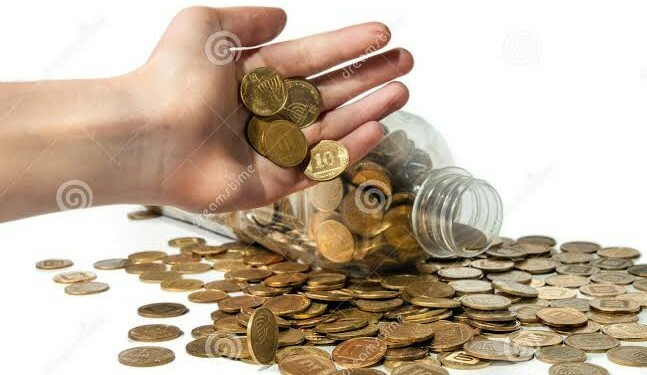 With the way cryptocurrencies is taking over the world finance, one should not be surprised if everything becomes tokenized because not only does the use of cryptos make transctions eaiser and faster, it also make payment more exciting.
Presearch has actually among the few companies that have tokenized their services.

The cryptocurrency aspect of the presearch ecosystem is called the "PRESEARCH TOKEN (PRE)".

The presearch token is a decentralized open-source token that serves as the functional unit of the Presearch ecosystem, it represents the rewards earned, advertising purchased or staked, and, in general, value created overtime.

NB; The PRE tokens are hosted on the Ethereum platform as standard ERC20 blockchain tokens. 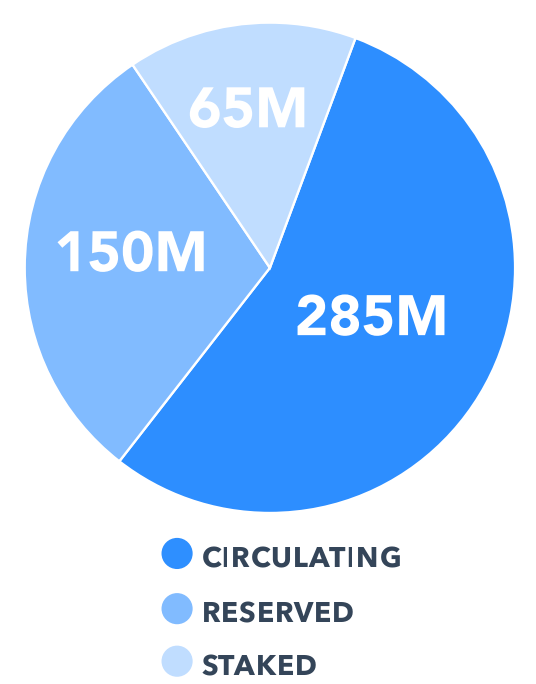 The Tokenomics behind The Presearch token (PRE).

Just like any other cryptocurrency, there are calculated/Analyized events revolving round tge PRE token, this is referred to as the PreToken Tokenomics.
The geneeral pivot of the Presearch ecosystem is built around the Presearch community, unlike other platforms, presearch presents to its users various choice such as;

• Choice of the kinds of search results you see and how you can direct the experience to your own benefit -- rather than algorithms driving you to content designed primarily to optimize corporate profits.

• Choice of whether or not to receive value out of the platform, in terms of both improved experience and rewards, directly reflecting the value contributed by each member to the platform.

This ensures that no active member of the presearch community is left out in the community benefits as the platform evolves.

It would be very unreasonable for one to think that Presearch (or any other company) can be able to raise enough fund or hire enough smart developers, product managers, and data scientists,That’s why the Presearch ecosystem is designed in a different way, When Presearch generates revenue from advertising, marketing, and from other various of services, presearch tend to plough back the revenue generated back into the platform.

Unlike most platforms, The Presearch ecosystem has no traditional/ permanent shareholders that are expecting a return on investment,
The PRE token represent and holds all value over and above that which is required to operate the Platform.

The Tokenomics of the Presearch token (PRE), helps in making it resistant to inflationary effect, also other important activities like "TokenBurn" will also be used to ensure that supply does exceed demand as this will reault to decrease in the value of the PRE token.

In conclusion; Presearch ecosystem is one of the few platforms where users experience digital freedom from the tyranny imposed on them by other centralized search engines.
With presearch, users are assured of 100% privacy and are also rewarded using the PRESEARCH TOKEN just by doing less of what they do on other search engines.
The presearch ecosysetem is fully powered by the Presearch token (PRE).
To register on presearch click here. 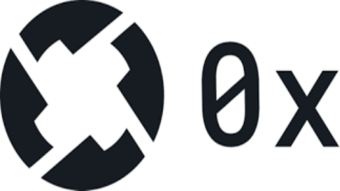