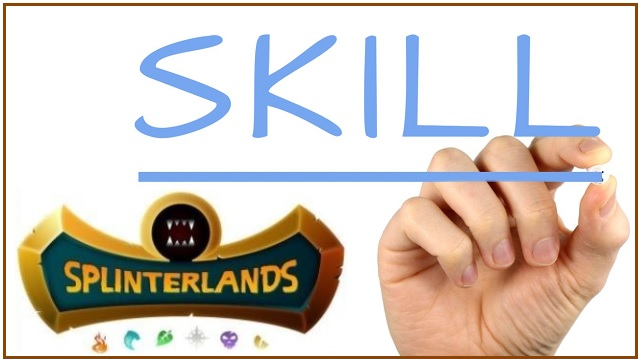 I have enjoyed Splinterlands for these past couple of years mainly because of the Earnings, Great Community, the Collecting & Learning aspects. The actual gameplay of the card game itself however always felt more like a daily task because Pay2Win just dominates everything about the game. In this post, I like to propose a solution to at least have a properly working skill-based mode in the game...

In Splinterlands right now, at least 80% of the games are played before the first card has been selected. There are so many cards and such a big range in power & abilities for each card that skill rarely to never really is a factor in the outcome of most games. The fact that the game is made so that certain game rules make specific cards deliberately crazy overpowered makes things even worse. This creates gameplay where if you win, you feel like you just had the better cards for the situation, and if you lost it's the other way around without ever giving that satisfaction or actually outplaying someone or getting outplayed learnings something in the process.

I recently started playing Slay The Spire which is a similar type single-player card game which was included in Playstation Plus this month. I have read great things about it in the past and I have really enjoyed playing it without the need to earn or get 'rewarded for my time'. It's just a challenging gaming experience that brings a lot of fun.

I had a similar experience with Hearthstone in the past at least with the Arena where players were left to draft a deck to try and progress as far as possible. This was a combination of Skill & Luck without it being possible to get an edge by paying more. Splinterlands right now has none of this type of gameplay and I believe this is one of the things lacking to attract a broader audience to the game that wants to play it competitively. Right now it feels like the player base is still mostly just interested in earning

Reasons For This Pay2Win Problem

I would say there are 3 main reasons why Splinterlands is the most extreme Pay2Win game I have ever played in my life.

1. Changing Times: I date back to the old NES days when games used to be crazy hard as there was only limited space on the cartridge. Gaming has casualized a lot and microtransactions with a more pay2win approach has somewhat become the industry standard as it's the most profitable since players are putting up with it. Still, the biggest games don't really have pay2win

2. Economic Incentives to Buy Cards or Packs: Collectible Card Games like MTG and Hearthstone are known to be crazy expensive money sinks for players and the enjoyment of collecting cards opening packs is a big part of the game. Basically, you try to climb the ranks and earnings to hit a wall facing players who just have way better cards which you can overcome by paying until you face the next wall. Since there are real rewards, they can't go to players that did not invest into the game to make it somewhat sustainable.

3. New Game Design: Splinterlands for as far as I know is quite unique as it allows you to combine cards to make them stronger with extra abilities. While for other collectible card games, once you have a card you actually have it in a similar way to the other players. This creates an extremely wide range of power between players in Splinterlands as not only the number of cards you own counts but also the level you have them at. The system with different leagues only solves this that much as some cards also are extremely rare and crazy overpowered. Llama / Yodin / Kitty Legendary Summoners pretty much are instant wins for players that own or rent them highly increasing the Pay2Win aspect.

What Needs to be Solved

While I understand that the game needs some kind of Pay2Win mode, there also should be a way to play the game on a fully leveled playing field where only Skill and Luck are factors while at the same time it doesn't take away the incentives for players to buy and hold cards or assets in the game. So Skill + Economic Incentives need to both be part of the equation making the gameplay itself both challenging and fun.

Right now each player gets to choose cards based on their own collection which creates the pay2win aspect of the game. If instead, the collections of both players get merged into a pool for both players to choose from, it would put them on a completely level playing field. For each card one of the players uses one from the collection, part of the DEC rewards will go to the opponent if he or she ends up losing that game. So indirectly the player with the bigger collection rents their cards for a single game to the opponent at a cost.

The exact numbers can be played with but just as an example say 20% of the earnings at least goes to the player that wins the match even if all cards come from the opponent.

As a way to incentivize players to actually hold cards and not just always to leech the cards from the opponent, a similar collection power requirement could be in place. Something in the line of the Airdrop points where all assets an account holds in the game count toward being able to actually play in certain leagues could be a requirement or holding at least a certain amount of SPS.

A system like this would create a truly competitive mode where all players are on a level playing field with skill and luck being the only real factors. The players that actually do own more and stronger cards will earn more and also get the experience advantage of being used to the cards they own. All this while there are still enough incentives for players to hold in-game assets as they are needed to be able to play in certain leagues.

I remain highly frustrated with the current Pay2Win state of the actual card game in Splinterlands to the point where I will likely fully opt-out of the game in case there is another hype cycle (I expect this to happen with the land expansion). This unless an actual fun challenging skill-based mode that I actually could enjoy is introduced. I doubt it will ever be created though as everything right now still points toward Economy over Gameplay with no indication of this to change. There are so many ways to introduce a proper skill mode though without hurting the economy or the incentives for players to buy & hold in-game assets