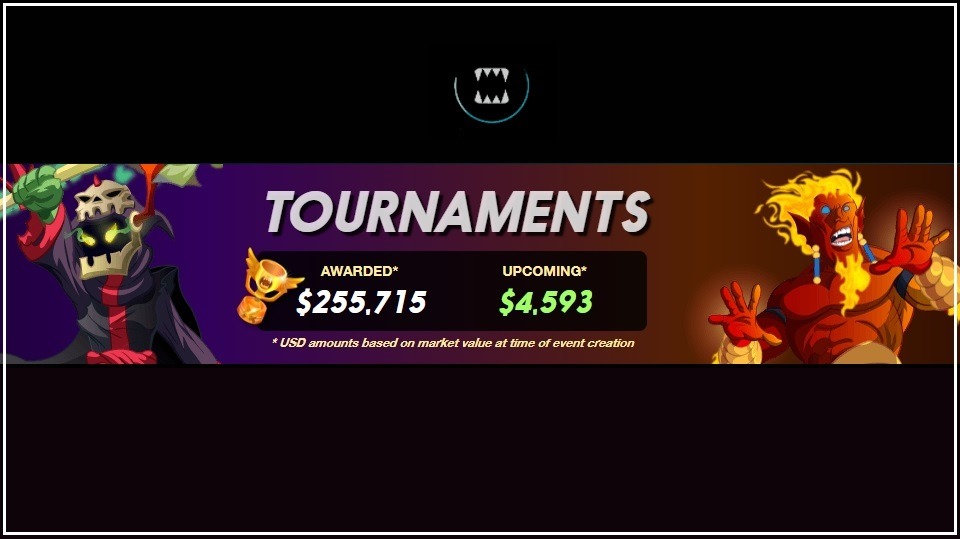 I haven't been playing many Splinterlands Tournaments as of late but I did end up registering to the Weekly Brawler yesterday. This is a report on my overall experience and the results.

The dominant sentiment I have around Splinterlands right now is that it is a great money farming scheme where the development is mainly aimed toward keeping the economy running making sure players get rewarded which comes at the cost of the gameplay and fun because the pay2win factor is at an extreme level. This is the main reason I don't really enjoy playing the game anymore and rarely to never play in tournaments.

I kind of accidentally stumbled upon the Brawler Tournament which I ended up playing since my collection has a standing chance given the fact that all cards were allowed and their level was limited to Silver League. The rather big 968$ Prize pool with the top 128 (ouf of 500 players) getting a part of that prize pool is what ultimately pulled me in. This is how it played out...

Round 1
I got a free pass in round 1 as the system needs to even out the number of players here to make the format work. This pretty much instantly put me in round 2 without having to play. It's a good thing these tournaments can be played on the side while doing other things and I also entered with my Alt account facing an opponent with around 2 Million Collection power having summoners 1 level higher compared to mine. I still managed to pull 1W-2L despite being heavily overpowered.

It looks like the opponent was idle during the first fight of round 2 which made the game feel like it was broken as it took forever for the screen to select my deck appeared. It was a player with 1.2 Million collection power and it ended up to a fairly even matchup in game 2. 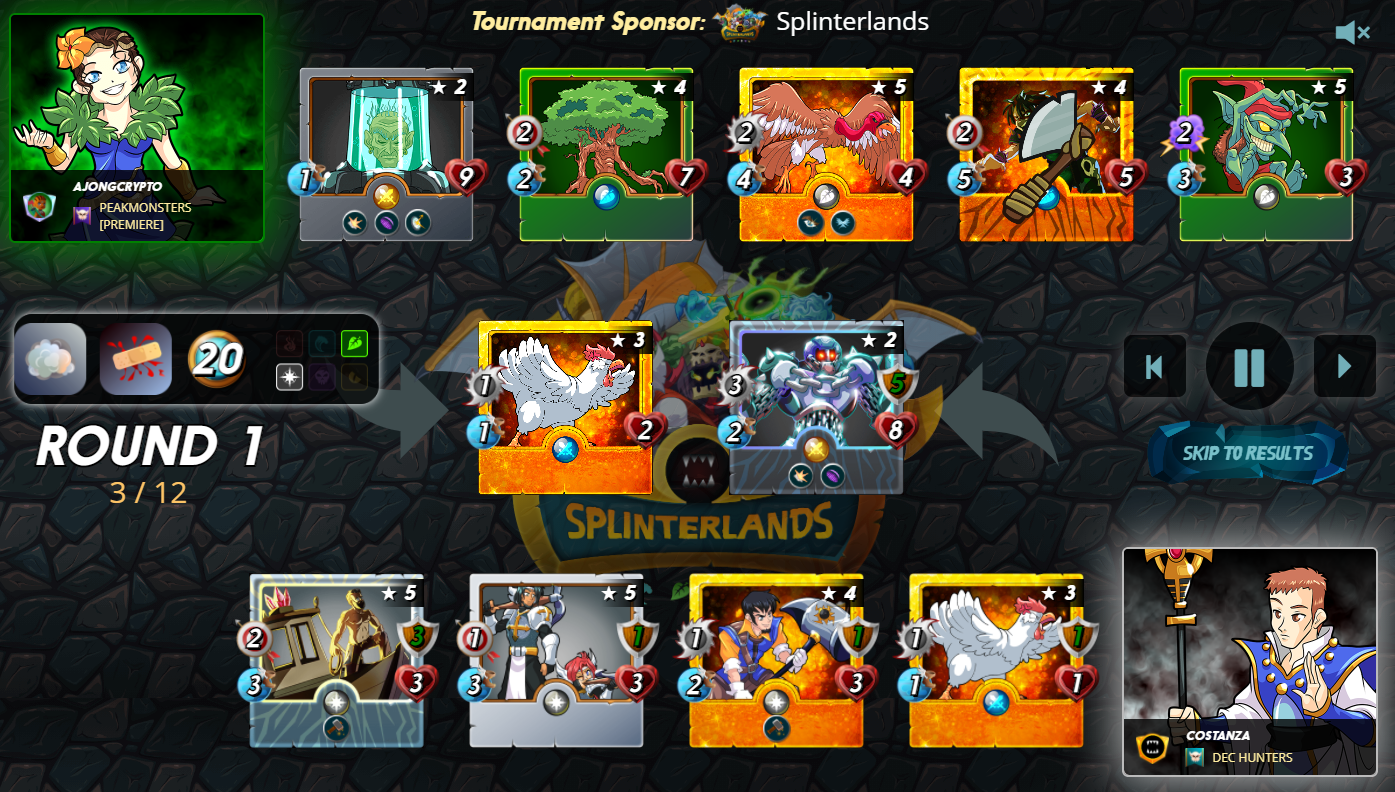 I pretty much fully played the game rules with No Heal and Sneak allowed putting everything on the 1st place tank with Armor and double armor regeneration. It was a strategy he could also have used since he had the cards available and this was actually a fun match feeling I outplayed the opponent even though it would have been no guarantee to go to the next round in case he was not idle for the first match.

In round 3, I faced a player with 430k Collection power who mostly had the higher mana fancy legendary summoners at a higher level without his collection being close to complete. 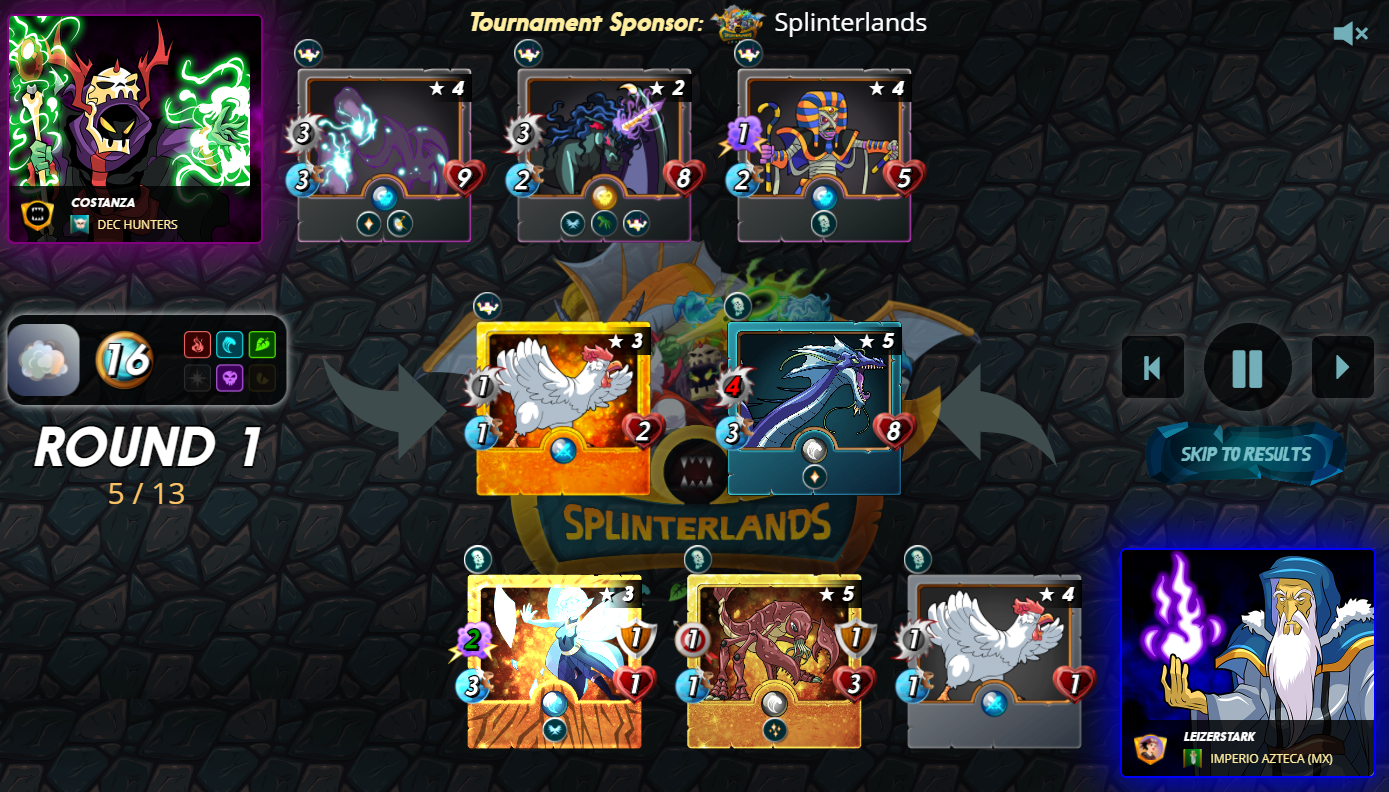 In the first match, we both opted for a self-healing tank with the difference that he chose for the double heal and a Furious chicken in 2nd place while I opted for a single heal with reflect giving all cards a +1 health bonus while removing 1-health from his monsters. It was another close fight where I did outplay him and won quite comfortably despite a key hit that missed during the game. He also had all the cards that I had available (looking at it now to evaluate) so fair and fun game. 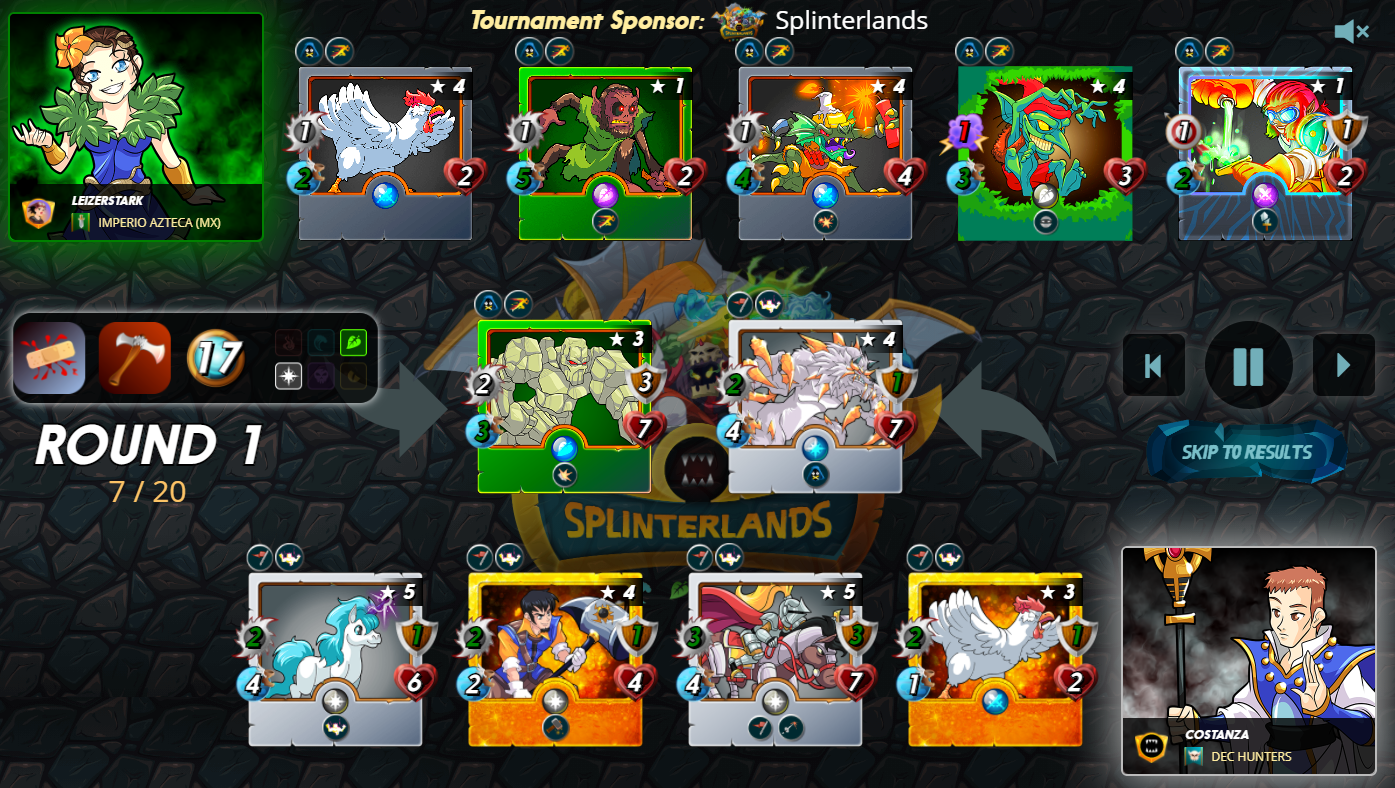 In the 2nd match with again the game rules where there was no heal allowed and melee monsters can attack from any position with 17 mana to spend. I opted to fully exploit the rules playing an all-Melee line-up expecting something similar from my opponent. The Life Summoner giving 1 Armor was a counter to that combined with the crystal Werewolf to prevent reduce his magic damage (I honestly assumed it also had thorns ability since I'm used to that in Gold league). Looking at his collection, he didn't have the option to choose for the Life summoner which gave me a clear pay2win advantage in this match. It took me some effort to break his 1st place tank but once that was done I easily beat the rest of his cards. so overall this win clearly came from me having better cards to choose a more optimal deck from. 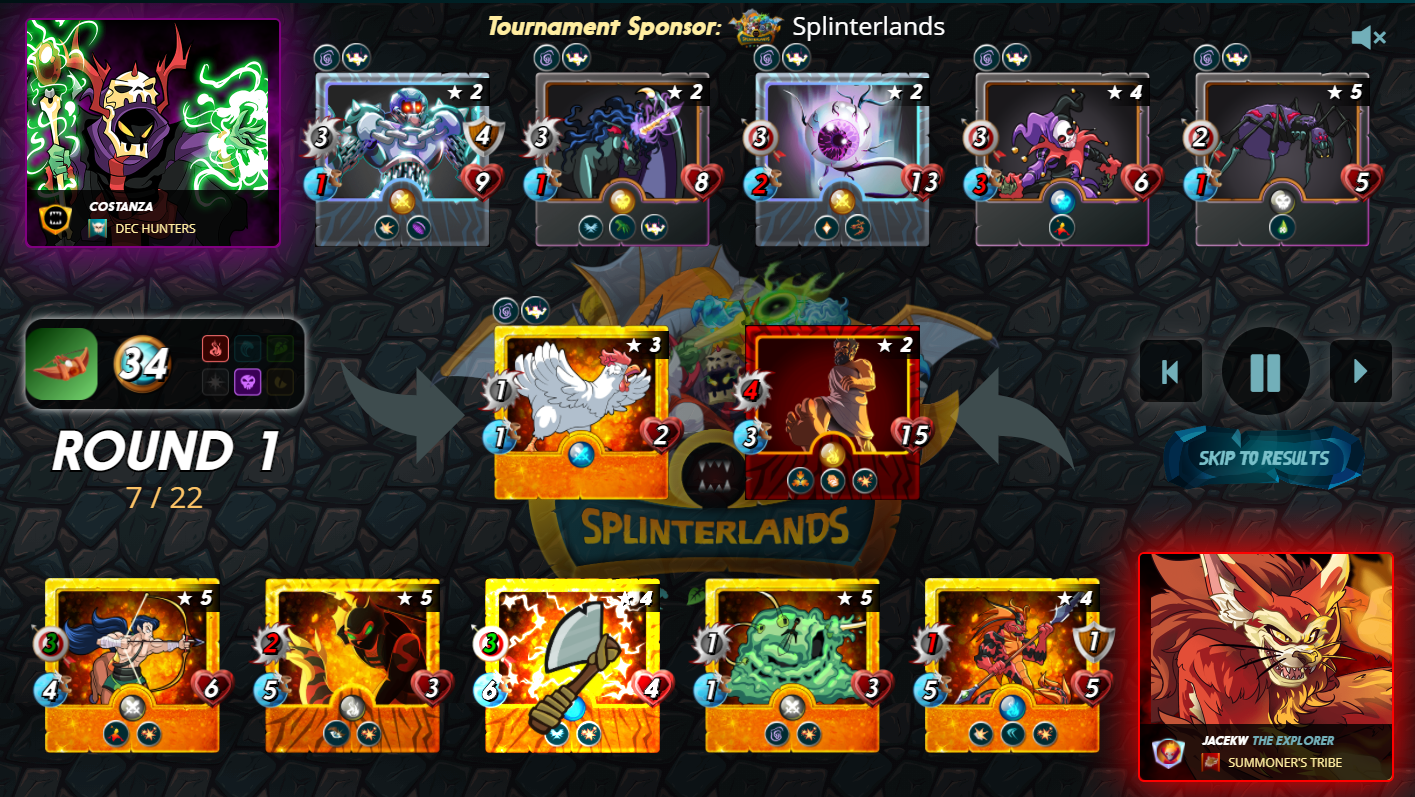 Facing the overpowered Zaku Yodin Legendary Summoner (which costs 126$ for a Level 2 / 255$ for Level 3) I pretty much stood no chance to start off with and he played a solid deck anticipating the opponent also playing Zaku Yodin (I don't have that cards) putting big protection against Blast damage with a big tank followed by a shielded monster and there was no way I could have ever won this match. 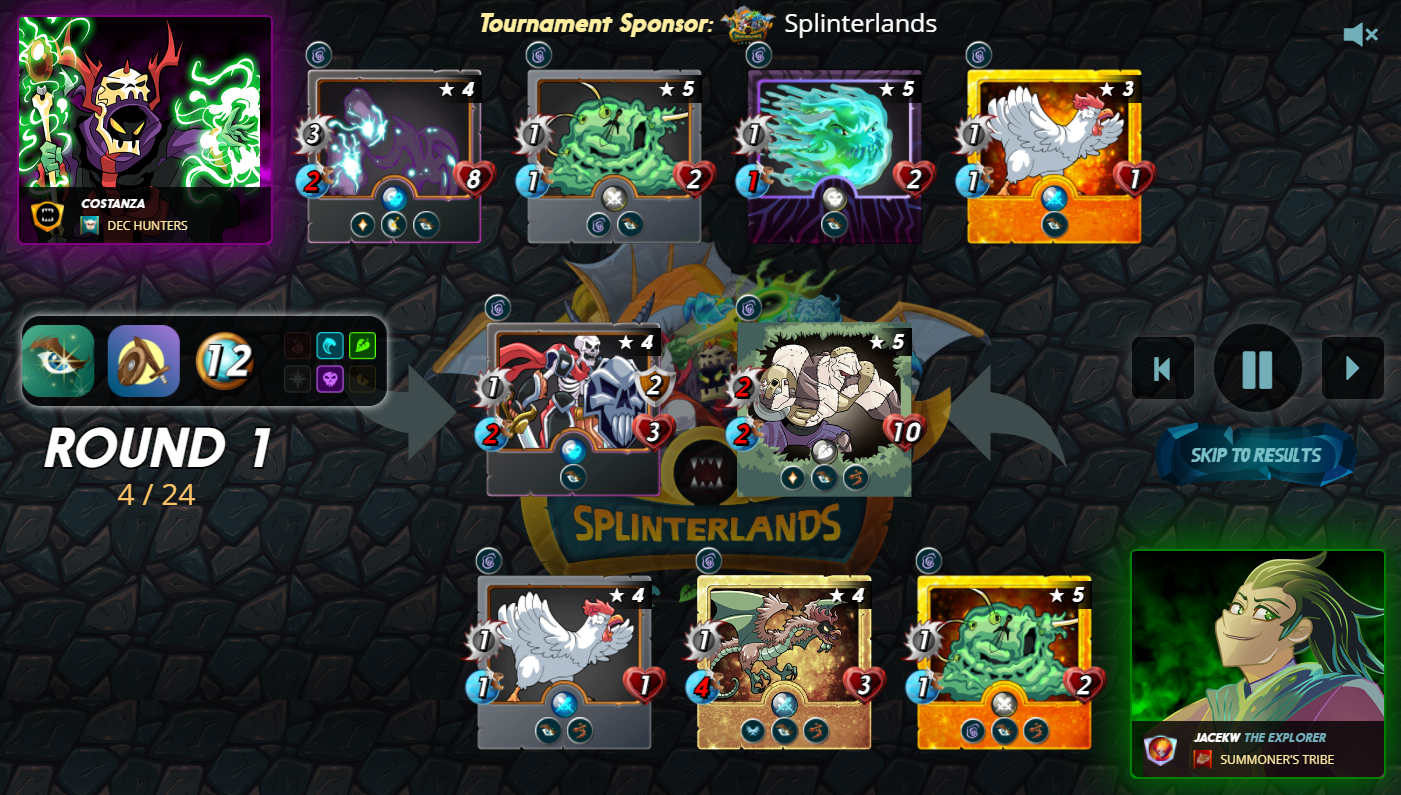 In the 2nd match, it was pretty much a similar story as I didn't have the Mylor Crowling Summoner (currently, it costs 50$ at Level 4) which destroyed me. I also assumed that my Skeleton Warrior had the Shield ability (which it has in Gold league) even though I don't think I would have made a different deck. I'm also quite sure I would have lost this matchup in case there was zero pay2win involved as I'm sure he is a much more experienced player with more knowledge on all the cards and combinations in the game.

Final Result
So out of 504 Players, I finished 52nd taking home 5000 DEC( 5$) once again getting some great value out of Splinterlands with the collection I managed to build over these past years. 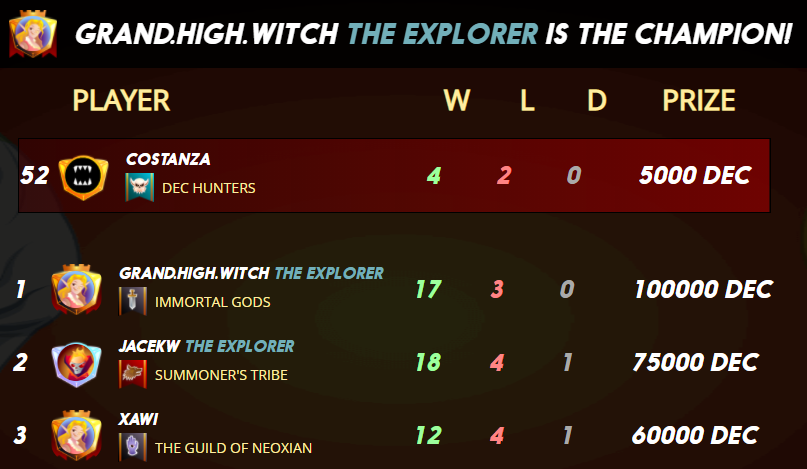 Final Conclusion
Playing this tournament while looking back at it making this review, I more than ever see the potential of how Splinterlands could be an awesome game I really enjoy playing providing a real challenge when it comes down to skill that is involved. Instead, I keep being left with an extreme pay2win experience (which even kicks in on the evenly matched games as you have no clue what cards your opponent has available). The joy of outplaying someone or the learning experience of being outplayed is totally non-existent right now. I still hope one day there will be a 100% skill/luck based mode which I'm sure can be done keeping the entire economy alive. The rewards is really what keeps me in this game and I'm quite sure I'll join this tournament again in the future.