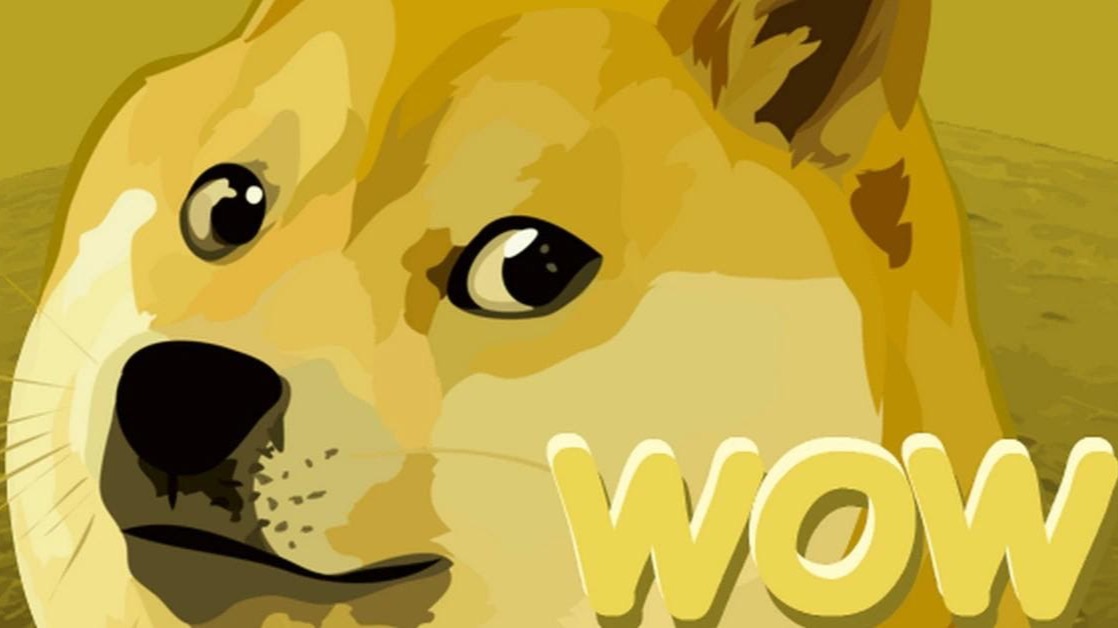 Dogecoin is an "inflationary coin,"  while cryptocurrencies like Bitcoin are deflationary because there's a ceiling on the number of coins that will be created.

Why Are There So Many Doge Coins? 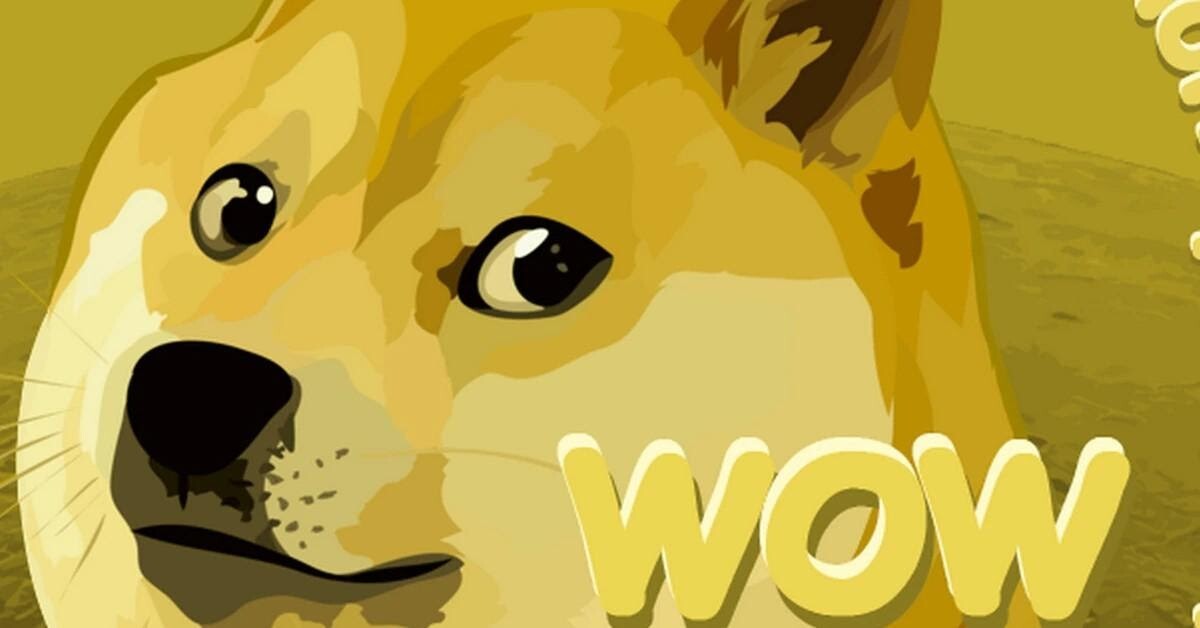 Dogecoin started as a joke in late 2013. But right now, it is a cryptocurrency that has somehow surged in price against the background of a slide in value across the crypto market. 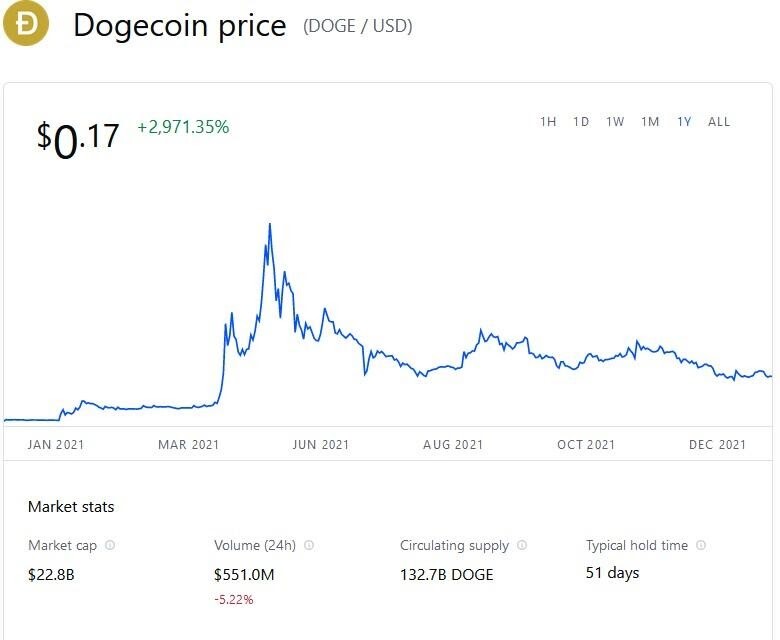 Among the many peculiar things about the coin is just how many of it there are. At the time of writing, there are more than 132 billion DOGE coins in circulation. 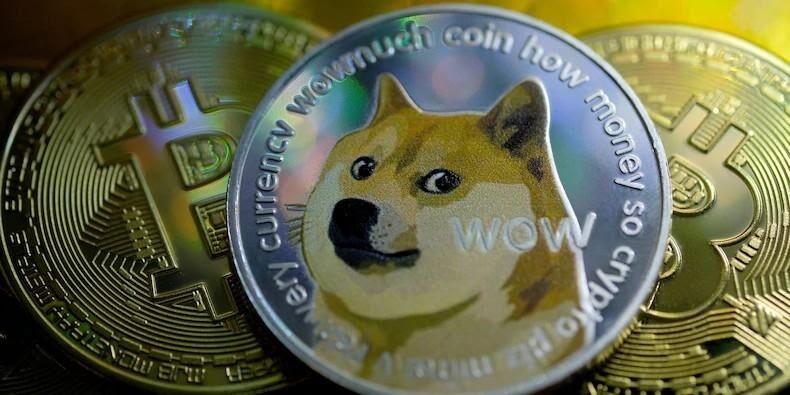 Dogecoin started as a joke back in 2013 when Jackson Palmer, a product manager from Adobe, took a light-hearted swing at the crypto-craze back in those days. Boy, would he be surprised by how far that craze has gotten.

By tweeting about this non-yet-existing coin, he started something that soon took on a life of its own. Shortly after that tweet, he bought the 'dogecoin.com' domain name and photoshopped a picture of the doge meme on a coin for the logo.

The thing went viral on Reddit, and this caught the eye of Bill Markus, a software engineer from IBM. He reached out to Jack, and together, they launched the actual Dogecoin we seem to be hearing about so damn often.

Markus based the coin on the open-source Litecoin model, which means anybody can take a look under the system's hood and see how it operates. It was also extremely inexpensive at a mere fraction of a cent per coin.

Why is Dogecoin So Popular?

We think there are a couple of reasons why Dogecoin is as popular as it is.

Ironically enough, it seems Dogecoin owes its success to not taking itself too seriously. The whole story of its creation revolves around a couple of guys joking around. People liked the concept, and soon enough, the world's richest man was doing free pump sessions for it. Not too bad of a joke, we'd say.

Neither of the co-founders meant or expected any of this to happen. Bill Markus actually drew a comparison a while back between Dogecoin's price surge and the Gamestop stock share phenomena earlier in 2021, calling both events absurd.

“The idea of Dogecoin being worth 8 cents is the same as GameStop being worth $325: It doesn't make sense. It’s super absurd,” Mr. Markus said. “The coin design was absurd, and it was meant to be absurd.” 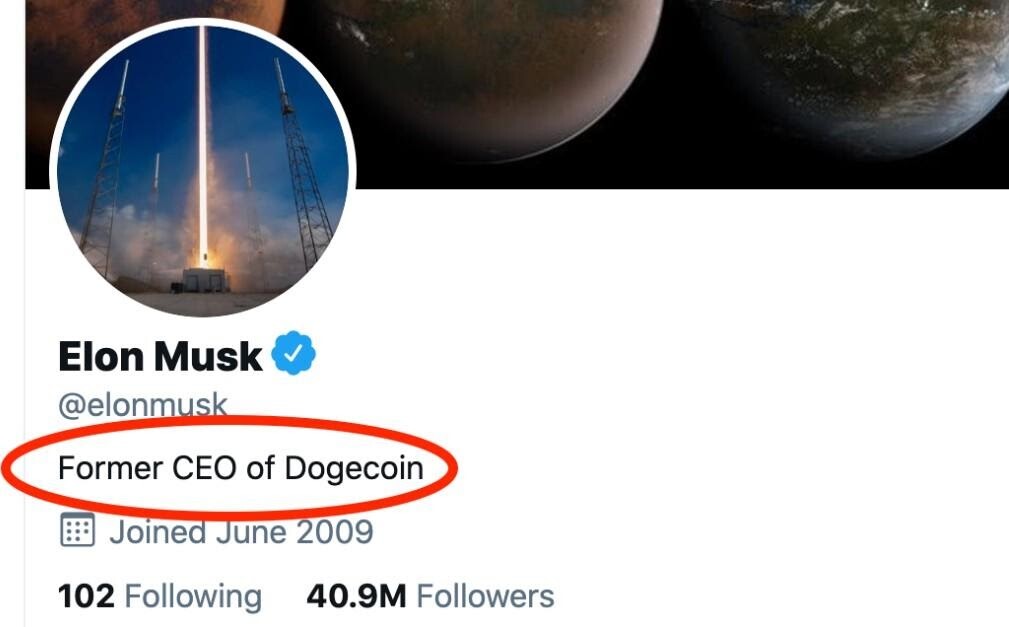 You can not really talk about Dogecoin without Elon Musk. The man played a crucial role in Dogecoin's success, especially over the last year. 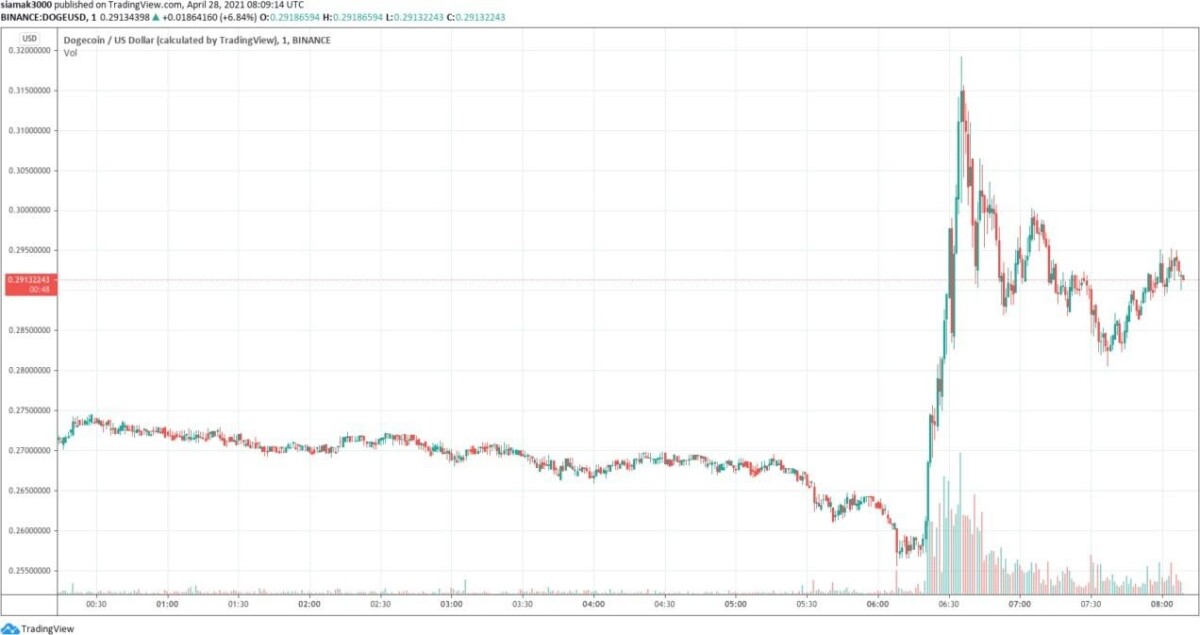 This image shows how impactful Musk's tweets can be for the currency. In just around 20 minutes after Elon sent out a supportive tweet about the currency to the masses, the Doge's price surged up to 23%.

The trend is pretty consistent around his other tweets about the coin.

Besides Elon, other influencers like KuCoin CEO Johnny Lyu and Twitter's founder Jack Dorsey also affect Dogecoin’s price. So when these people start accepting Dogecoin as a mode of payment or otherwise team up with the project, you can expect a price surge.

How Many Dogecoins Are There? Is There a Limit?

At the moment, there are over 132 billion doge coins in circulation. As we mentioned above, not all of these coins were around at the start.

The overall number of coins in circulation goes up about 5.2 billion coins annually each year.

3 Reasons Why are There So Many Doge Coins

There are two reasons why there are so many dogecoins.

Firstly, its design mandates the addition of over five billion coins to circulation annually. So each year, the total number of dogecoins available goes up by this number.

Secondly, Dogecoin was not meant to be a scarce currency. This might be in somewhat of a contrast with Bitcoin, the biggest cryptocurrency by market cap at the moment. The less scarce a currency is, the more accessible it is.

We should note that the second reason may not have been intending to make it super accessible. But like many other things with Dogecoin, the result probably was not premeditated, whatever the intentions were.

The 4 Advantages of Having So Many Coins

Adding coins to the circulation inflates the economy. But that is not all it does.

Whether or not this model was intentionally implemented for a specific economic function is not clear. But it has consequences nonetheless.

If you compare what Bitcoin is now to what it was supposed to be, you will see a stark contrast. It may have been supposed to be a decentralized transactional currency. But it has become more of an investment vehicle.

This is because Bitcoin has a limited supply. This creates deflationary pressure on the coin. So as time passes, it becomes less of a transactional currency and more like digital gold that you would not want to spend all that much.

By removing the cap from total circulation, Dogecoin becomes more of a transactional currency and discourages HODLing. You are more likely to spend it since you know it may have less value tomorrow.

Each Dogecoin block mined adds 10,000 new coins to circulation. Who do these coins go to? The miners. It is their reward for staining or growing the system and adding new blocks to it.

Since there is no limit on how many coins you can mine, you can always earn more rewards. This can encourage miners to keep mining Dogecoin blocks which ultimately grows the economy. 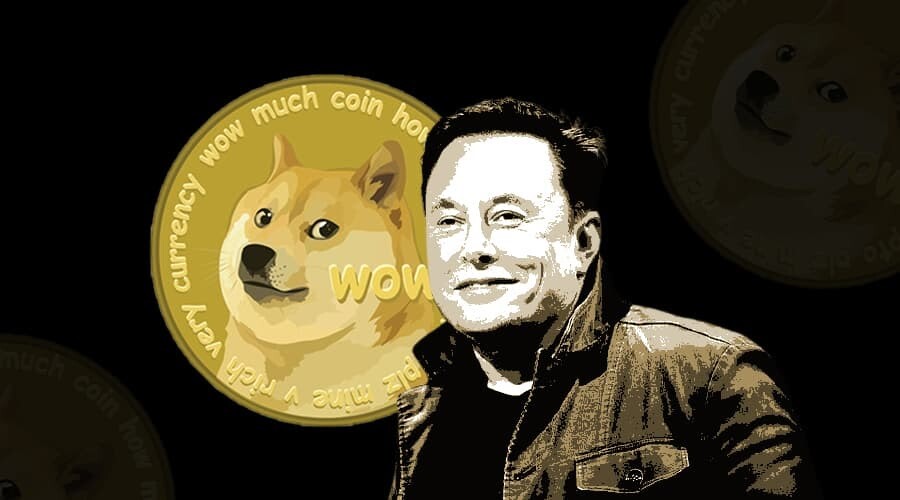 Since there is inflationary pressure on Dogecoin, and such a vast amount of coins is available, a single coin is not worth much. At its highest, Dogecoin's price has been around $0.7-0.8. This makes buying Dogecoin easy, and you do not have to worry about fractions.

Since it has a low barrier to entry, Dogecoin provides the masses with a retail currency. New block generation is also relatively easy. This might also help keep the transaction fee much lower than the top cryptos like BTC and ETH 1.0.

“Seeing bitcoin’s rise, some younger investors without a lot of money want to profit from crypto as well,” Lyu said. “But you’d need over $60,000 to buy one bitcoin. So they turn to Dogecoin and SHIB, where you buy tons using just $100.”

What Drives the Price of Dogecoin?

Pinning down all the factors that affect the price of any crypto is not very practical. When it comes to Dogecoin, some of the following factors may stand out.

What Do People Think of DogeCoin?

When it comes to sharing positive opinions of Dogecoin to the masses, nobody surpasses Elon Musk. His occasional yet effective support for the coin (even if the support is meant as a joke) has helped the coin tremendously. 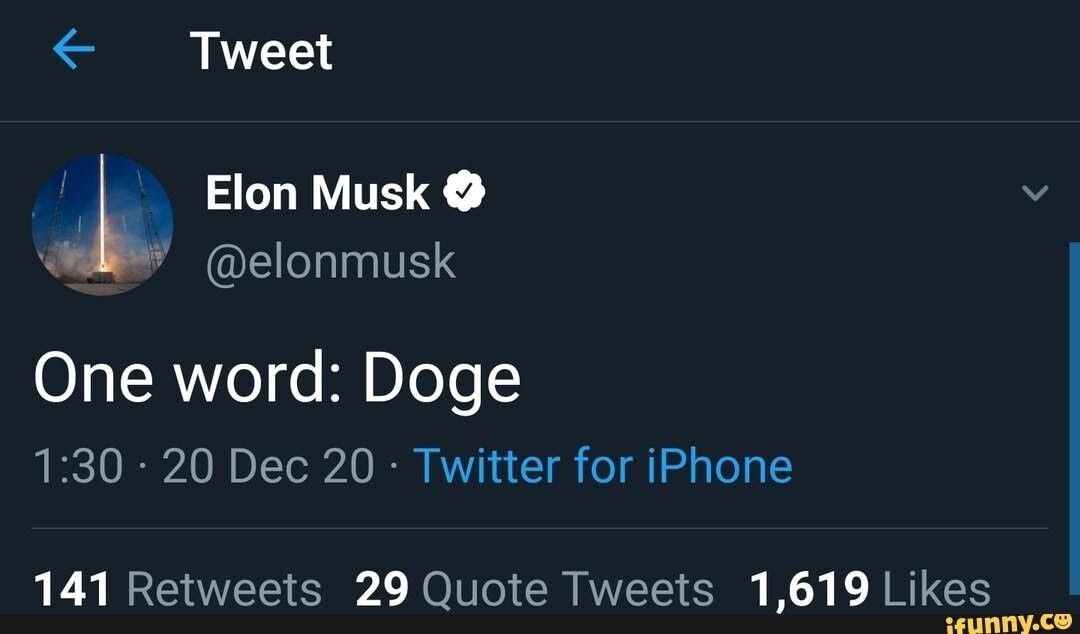 Other than Elon, other influential figures like Billionaire Mark Cuban and Vitalik Buterin also support the Doge community. 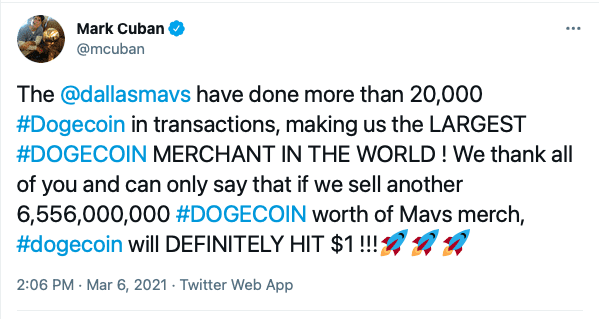 The recently reformed Dogecoin Foundation is also collaborating with Vitalik Buterin, the founder of Ethereum, on the transition from PoW to PoS.

Similarly, KuCoin's CEO, Johnny Lyu, also mentioned a positive aspect of Dogecoin in the quote we listed above.

But it isn't always fun and skyrockets with Dogecoin or any other cryptocurrency, for that matter. Many influential people doubt Dogecoin's potential, citing the currency's built-in inflationary pressures and dependence on random marketing pumps.

Crypto remains perhaps the most widespread volatile market out there. Currently, Dogecoin is surging but let's not forget it could come back down again soon.

Don't forget that you can easily exchange your coins for DOGE on CoinChanger.

This blog is about cryptocurrency exchanges.