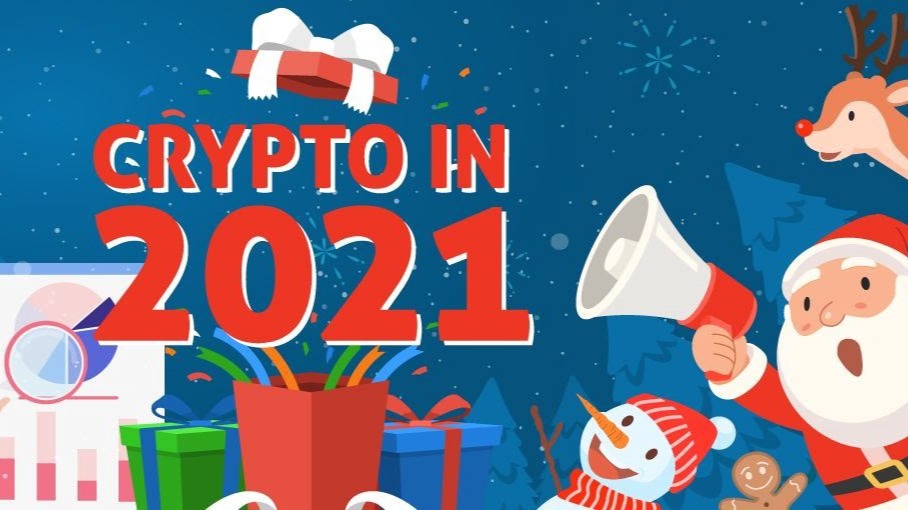 As 2022 is spinning up, it’s a good time to remember how 2021 was for crypto. After taking a broad look at the last year’s main events, we will be able to watch the current processes from a much deeper perspective.

The last year was marked by two major bull runs and raised adoption levels among institutional and retail investors, but there was also room for big scams and bans. Now, we will remember the most significant crypto events of 2021: first, we’ll consider positive and negative trends, then, we will take a look at some of the most successful projects, and finally, we will mention two big failures that shocked the crypto world in 2021. Dig in!

First of all, the crypto community held its breath in 2021 waiting for new Bitcoin all-time highs — and after the first one happened in April, we witnessed another at $69,000 in November. Among other reasons for the surge, there was public support for BTC expressed by such celebrities as Tesla’s Elon Musk and Twitter’s Jack Dorsey.

Besides posting positively about Bitcoin on their social media, businessmen raised their companies’ stakes in crypto. Tesla announced having invested $1.5 billion in Bitcoin and started accepting BTC as payment (which, however, was later reversed due to environmental concerns around mining). Square also purchased $170 million worth of Bitcoin, while MicroStrategy increased its BTC portfolio to an unprecedented $6 billion.

Another coin that profited from Elon Musk’s extensive Twitter posting was Dogecoin — and what’s more, the entrepreneur was even more positive about the asset than about Bitcoin because it had “dogs and memes.” After the wave of Twitter activity went down, however, DOGE dropped and couldn’t repeat its spring’s $0.70 ATH in the fall rally.

One more outcome of the Dogecoin pump and Elon’s tweets was the emergence and an aggressive pump of a cohort of Doge-like meme coins like Shiba Inu or Floki Inu that literally flooded the crypto market. Although there were dozens (or maybe even hundreds) of new tokens of this type, the two mentioned ones were the most outstanding, and we will review them further below.

Last but not the least fact about Bitcoin, the first cryptocurrency was for the first time in history accepted as legal tender in Central America’s El Salvador. Although the way authorities integrated Bitcoin into the country’s life was controversial and sparked debates in the crypto space, such news is a clear sign of rising crypto adoption worldwide.

One of the hottest trends in crypto in 2021 were NFTs that hit the headlines in February and March. The most expensive item, the digital work “Everydays” by Beeple, was sold for over $69 million. The trend, however, didn’t relate solely to digital artworks — the NFT-based games such as Axie Infinity, Sandbox, and Decentraland in a so-called GameFi segment also surged to unprecedented highs.

Most of the NFT segment is based on the Ethereum blockchain that was implementing its transition to the Proof of Stake Ethereum 2.0 during 2021. PoS is to be fully enabled in Ethereum this summer, while the final version of Eth2 is expected to be deployed by 2023. The new consensus and blockchain structure will drastically improve the network’s throughput and reduce its fees.

Many competitors to Ethereum and its layer-2 scaling solutions also surged this year as the demand for platforms with dApp functionality raised. Solana, Avalanche, Cardano, Polygon, and Binance Smart Chain are the most prominent examples.

Finally, as crypto adoption went on, digital assets reached stock markets in 2021. Coinbase had an IPO on Nasdaq, and the first Bitcoin ETFs emerged.

The crypto community was shocked in April when China banned all operations related to crypto mining and forced miners to immediately flee the country. Bitcoin’s hashrate tumbled by 50%, followed by a massive drop in the asset’s price. Miners relocated mostly to the USA, Canada, Kazakhstan, and Russia.

In the toughest days in July, Bitcoin fell below $30,000, sparking negative sentiment in the market. The drop provoked by miners’ exodus from China was reinforced by Tesla’s stance on Bitcoin: the company reversed its decision to accept payments in the first cryptocurrency until the environmental impact of BTC mining isn’t tackled with green technology.

Another major ban of 2021 hit Binance — the crypto exchange was suffering strong regulatory pressure across the entire globe. The platform’s operation was ceased in the UK and questioned in many European countries. As a response, Binance tightened its KYC policy, forced its users to pass the identification procedure, and strongly limited the number of features available to unidentified users.

As the crypto economy continued to grow, its poor regulation allowed scammers to carry out numerous attacks. The Squid Game token lost 99.99% of its price in an instant as the project’s founders withdrew most of the liquidity worth $2.5 million. The sum of money stolen in the DeFi segment in hacks and exploits reached hundreds of millions of dollars, while the total amount stolen in crypto in 2021 is estimated at $7–10 billion.

We’ve already mentioned a few projects that skyrocketed in 2021. Now, let’s take a look at them and some other coins that demonstrated a great dynamic over the last year.

Cardano started the year at roughly $0.20 and finished it at $1.30, demonstrating an increase of 6.5X (the all-time high of $3.10 was reached in September). The ADA price was mainly driven by positive news related to the coin’s development. In early fall, the Cardano went through the Alonzo hard fork and entered the Goguen era of its roadmap, which unlocked the long-awaited opportunity to deploy smart contracts and build dApps on the platform.

This meme token stands in the forefront of numerous Doge-like cryptocurrencies that became popular this year after a series of Elon Musks’ tweets. Compared to dozens of copycats, Shiba Inu has actually managed to establish a large community called ShibArmy and develop many use cases. The token made +1,400% in 2021 and at some point even beat Dogecoin by market cap.

As Ethereum fees continued to surge, there was a huge demand for layer-2 scaling solutions for the platform that could allow users to leverage Ethereum’s security but process transactions at much lower fees. Polygon offered such functionality, and its MATIC token ended up being of the biggest gainers in crypto in 2021 and showed an 11,000% increase made during the year.

We described Shiba Inu above, but as that meme coin was one of the best-performing “dog tokens” of the year, it was launched long before the dog frenzy. On the contrary, Floki Inu was exactly a product of this hype and was conceived by Shiba Inu supporters after Elon Musk tweeted that he was going to get a Shina puppy called Floki. The coin has made 600% only during the last 4 months of 2021.

Helium is the new word in the Internet of Things (IoT) — it’s a platform that allows users to install their own hotspots to provide surrounding IoT devices with a cheap internet connection and mine HNT token as a reward. Over 270K Helium hotspots had been installed by the end of 2021, so the demand for the platform was very high, and the token’s price grew by 1,400%.

Ravencoin’s 2021 started at $0.01 and finished at $0.1. The coin is a BTC hard fork launched in 2018, and it was demonstrating a moderate price dynamic before 2021. This was until the time when WallStreetBets and its users short squeezed GameStop stocks, provoking turmoil on the game stock market. The community ultimately turned to Ravencoin due to its tokenized securities features.

Some of the biggest crypto fails in 2021

Despite numerous successes, 2021 was marked by an abundance of tokens that quickly lost their value after a short hype upon their launch. Another negative impression from 2021 is how many hacks and scams there were. Let’s look at two noteworthy cases from this category.

Save The Kids scam

The “Save The Kids” token was launched in June 2021 as a charity project: a part of the revenue from token sales was supposed to be redirected to children’s charities. In an attempt to pump the token, its leaders established numerous partnerships, including the renowned eSports team FaZe Clan. However, the token appeared to be a classic pump & dump scheme: after the token price surged, the founders sold most of the asset liquidity thus provoking a collapse in its price. The community was left with empty wallets and an unpleasant feeling of manipulation undertaken with a sensitive topic.

2021 was the year when the crypto market reached unprecedented highs. It was marked by increased adoption rates, surged coins with valuable use cases, and opened new opportunities. Even China’s mining bad first hindered the operation of Bitcoin, but ultimately it only promoted decentralization of the network by moving mining facilities to many other countries.

During the year, we were watching Ethereum unroll its Proof of Stake plan along with successes of other dApps platforms and the GameFi+NFT craze that is likely to continue in some way. We couldn’t escape the unpleasant surprises of scams and hacks, but that’s the price we had to pay for the rapid development of crypto in unregulated conditions.

In 2022, ChangeNOW expects new all-time highs, prominent successes, and further growth of the crypto community. We hope this year will be successful for you personally, too — and we wish you luck in whatever you start or continue this year, be it related to cryptocurrency or not!