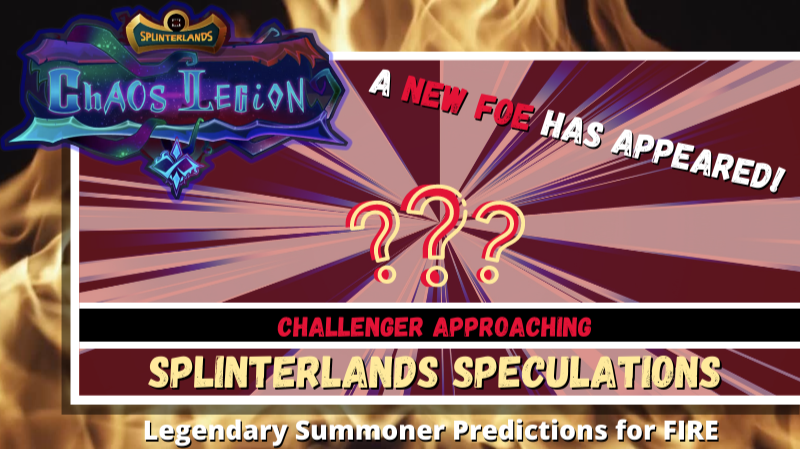 As you guys know, we just recently finished the airdrop for Carnage Titan, I managed to receive one copy of this bad boy, and I got to thinking: Why am I WAITING for a hint at the airdrop cards when I could speculate NOW, and then readjust/refine my speculations as we start to see artwork and previews?

As you saw from the LIFE one yesterday, my plan was foiled for Life, but that's okay, that's a great way to start off the series!

So for the next week or two, get ready for a Splinterlands Speculations palooza of me making horribly wrong predictions about all of the Legendary Summoners coming to the fray in Chaos Legion. These next ones will be completely based on speculation and meta...

I'm going to make multiple predictions for each of these, at least one prediction will assume that the Legendary Summoners are Invaders, and at least one will assume they are new Defenders. For those of you unaware of the Lore, the Chaos Legion is an evil invading force seeking to destroy Splinterlands and sacrifice it to their god... So there are now Summoners who are Defenders of Splinterlands, like Malric and Lyanna, and Summoners who are Invaders with Chaos Legion, like General Sloan and Tarsa.

The Fire Meta has evolved throughout the years, but honestly, out of the Splinters, remains the most unchanged/true to its original form: Fire has always been a hyper offensive Splinter, focused heavily on damage, heavy hitters, and soft, glass cannons. It has some excellent tanks, and some very nice squishy damage dealers.

Much of Fire's summoners deal with +1 Melee, and/or bonuses focused around Anti-Armor and hyper aggressive playstyles like Blast in Yodin.

Now, we've seen the Fire meta has evolved to include some anti-magic into their lineup, with much needed supports added in to give it a lot more utility, despite still remaining one of the most melee-focused Splinters out of all the splinters, despite nearly 4 years of Expansions.

So how do I see the new Legendary Fire Summoner ending up?

The previous Legendaries have cost 3 Mana, 5 Mana, 7 Mana, and with Quix: 4 Mana. Going off of this pattern, I think we will either see a 4/6/8 Mana, to match up with Quix, or we will see 9 Manas to continue the trend of increasing Odd numbered. Because going to 9 would mean 4 Ability Summoners, I believe we are going to see a reset and the Legendaries are moving back to either 4 Mana or 8 Mana, depending on if they start with their Lower mana Summoners or higher. I will try to come up with 1 for each for DEFENDER/INVADER.

Because Quix is a lone Dragon Summoner, and there is ANOTHER Dragon Summoner coming in the Top 6, I believe that it is FAR more likely that these new summoners are the 8 Mana Variety

As a 4 Mana, I believe they would continue the format of Quix, in having 2 Abilities

As an 8 Mana summoner, I believe we will see 3 Abilities, like the 7 Mana summoners, but with ability spreads rivaling Llama and Yodin at minimum. If this is the case, this will be an absolutely wild set of airdrops (or should I say modern? yeah my jokes suck.)

With 2 Abilities and 4 Mana, I think we would see a summoner in this situation that brings wild chaotic energy to the fight, so I think we're going to see another melee oriented Summoner, but a fresh new take: Enrage and -2 Armor. A mix of Eastwood, this is a berserker type summoner who would tear through the opponent's armor and grows angrier and angrier with each attack. Enrage is an ability befitting a Legendary summoner IMO, and I think this fits with Fire (or even Earth) the best.

I am going to cast a very wide net on this predictions for now and go somewhere totally different here: Let's see a Fire Mage who manipulates his summoned creatures to EXPLODE. That's right... I'm thinking this is a Redemption, +1 Magic, and Scattershot, because I really want to bring in the Chaos.

This would be a wild card, and Redemption on a large amount of creatures would be devastating in certain situations. Not to mention the sheer chaos of Scattershot, would make this an unpredictable, chaotic summoner that is both truly powerful when its RNG shines, and also fairly balanced by its reliance on RNG. One thing's for sure, Low Mana or High Mana, this would be a crazy battle for everyone involved.

With 2 Abilities and 4 Mana, I think we would see a summoner in this situation that enhances Life's already present meta, by enhancing the Armor aspect of the Melee cards in Fire, one of the few things missing from Fire's Melee focused movesets.

As an Armor and Sustain focused Meta, I think the obvious choice here would be Repair and +1 Armor. This ability combination would counteract a lot of Fire's weaknesses, and re-cement Fire as the "Melee" meta, while also not interfering with Life's authority over all things Armor. It also continues Fire's long line of Summoner's countering eachother in small ways, making him a counter to Tarsa, and countered by Qid Yuff. Fire is also one of the only Splinters with relatively low Armor, and I can even imagine it being another Dwarf, similar to Kelya.

So, in keeping with 'casting a large net', what's another creative way to amp up Fire's defensive aspects while also playing into its offenses? Speed. I know, I know, Pyre, but how about this:

+2 Speed, Shatter and Deathblow, You've suddenly got a summoner good for handling Last Stand, and great at taking on Life's massive amounts of Armor, as well as Water's and Earth's massive amounts of armor, which put Fire in a tight spot at times. Armor? No thanks, it's gone. Bye. On top of that, the +2 Speed makes this a very offensive Summoner while still offering some defensive bonuses that is not typical in Fire.

To give you an idea of where I'm coming from, I'm imagining a fast, fiery elven assassin.

Okay, last time I suggested that maybe the Life Summoner will have the ability to summon Dragon splinter monsters because of its dragon aesthetics. I have no aesthetic to go on here, and I think, if the team did crazy unexpected things with the Legendary summoners, it would be different for each, rather than all of them having the same bonus... As such:

I propose a 4 Mana Blast Summoner, mini Yodin. No other stat bonus because Blast is clearly broken on a summoner, and going even further, this summoner might even need a nerf of -1 HP at 4 Mana.

I know I know, there's already Yodin, but also there was already Plado, there was already Malric, Pyre... So I'm just saying, don't count it out quite yet. This would also help 'level' the playing field for new players coming in, who are struggling to deal with Yodin's 'authority' in lower leagues, where he is almost a bully summoner before finally balancing back out in Max Silver, and in some of Gold.

Have a different idea for what the Fire Legendary summoner could be? Share it in the comments!

in 7 Days, I'll choose 1 winner to receive a small bonus in a random FIRE Common, whoever's suggestion I like the best will win >:D. There MAY also be some awards for Honorable Mentions >:D

Wanna join the Chaos Legion? Play with me on Splinterlands!

if you use my link, here: https://splinterlands.com?ref=jakkal

I'll send you 100 DEC when you sign up and get a spellbook, (as long as you show up as referred) which should help you get started via renting! Also, feel free to message me, I can answer any questions, give tips, etc.

You ALSO get entered into every giveaway that I do, and sometimes I'll do special Referral only giveaways and delegations, which will be starting back up again soon as well!n