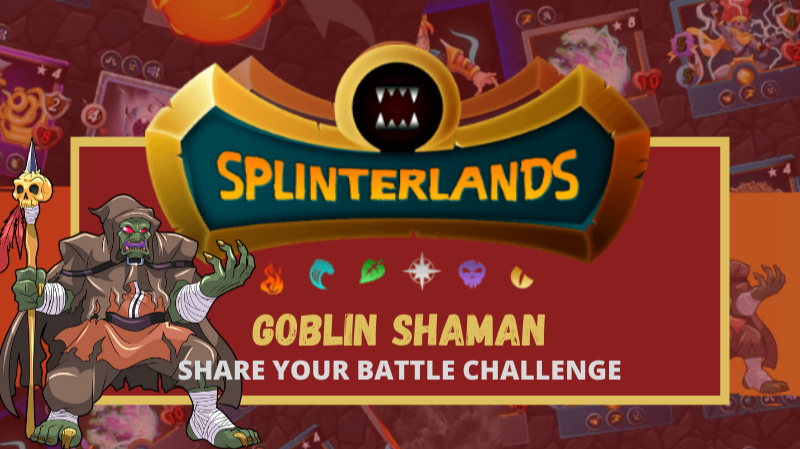 Splinterlands Share Your Battle Challenge: GOBLIN SHAMAN "Somebody get this Goblin a pedicure please" 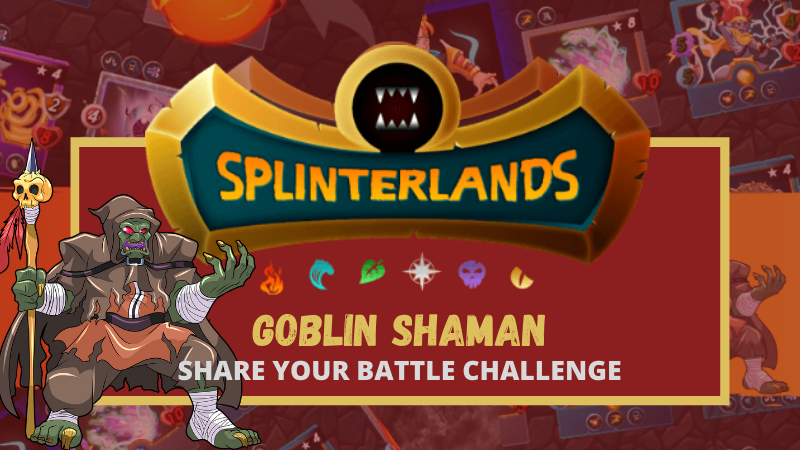 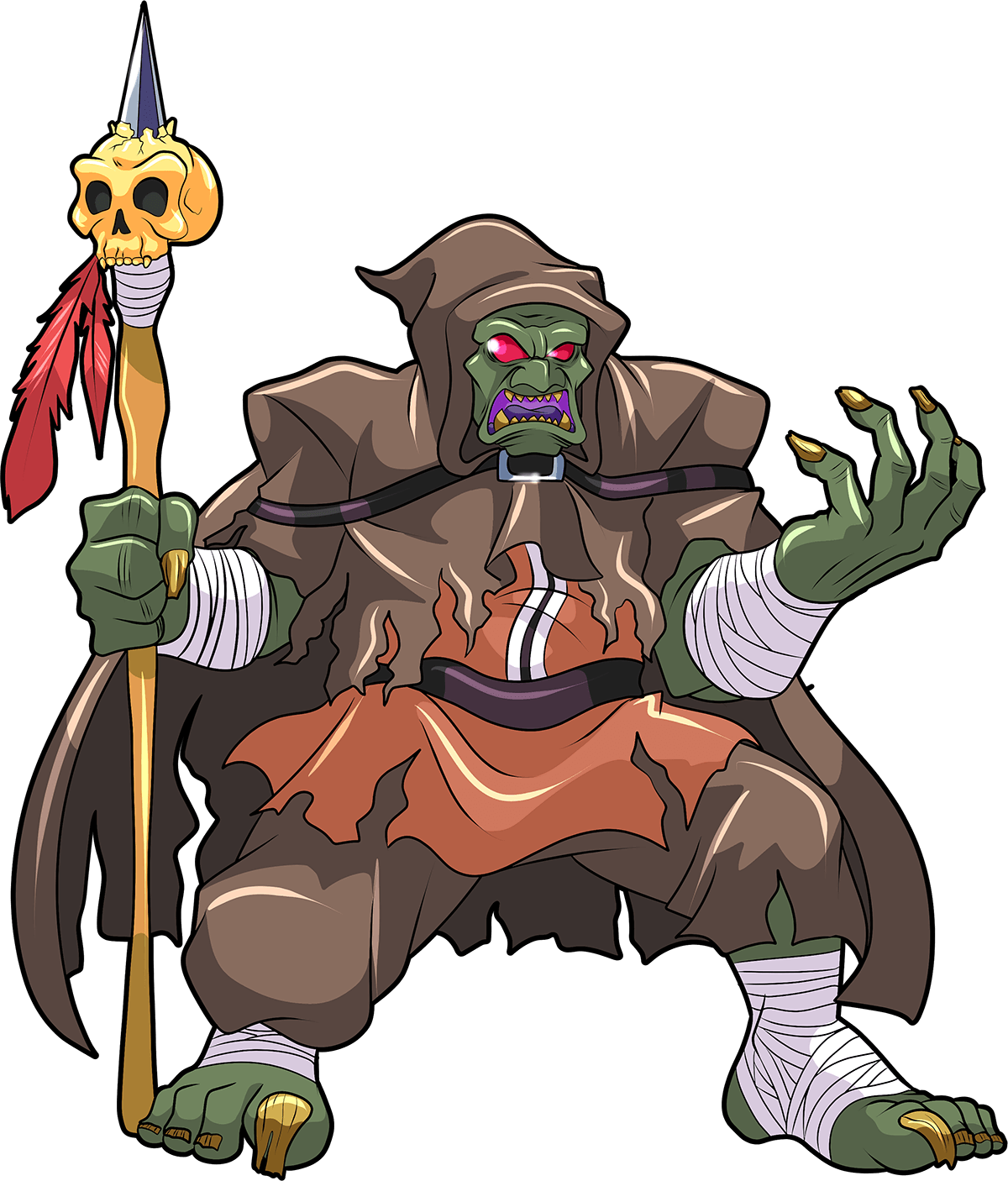 One of my first upgrade Fire Beta cards! I own a 5 BCX copy of this card, as, when I was playing, Fire was a very powerful team, and Serpentine Spy vibed nicely with the Weaken Debuff, and Goblin Shaman had a unique magic attack that my other cards didn't have.

I like him, even at Level 1, but I think that his usability and effectiveness ramps up explosively upon reaching Level 3, as now you no longer have to choose between a debuff/support or an attacker, you can have a hybrid!

First, some info on Goblin Shaman: 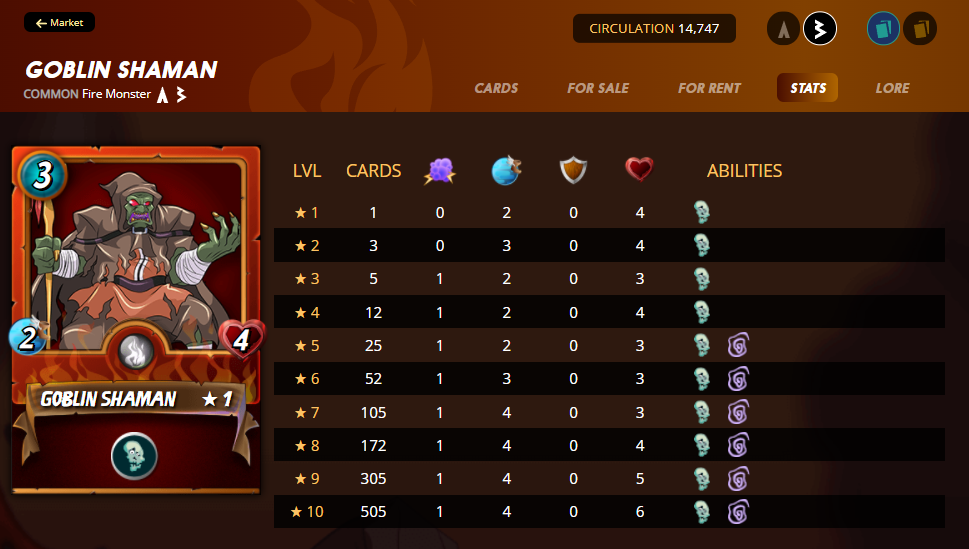 Goblin Shaman is a card that is a little awkward initially, at 3 Mana, he has 2 Speed, 4 Mana, and Weaken, which lowers all opponent's Health by 1, as long as he is alive. Many players will pass over him in favor of attackers, but in little league, even as he is, he is a devastating debuff/sponge.

At Level 2, he gains +1 Speed, and then, at Level 3, he actually loses 1 Health and Speed, becoming a 1 Magic Attack, 2 Speed, and 3 Health attacker. This is a pretty significant debuff, but it also changes his usability and playstyle, becoming a hybrid attacker/debuffer as opposed to just a meathshield that debuffs!

At Level 5, he actually has the same stats, but gains access to Slow, reducing Speed by 1 to all opponents.

At Level 10 though, he's finally gained some stats! He has 1 Magic, 4 Speed, and 6 Health, along with Weaken and Slow. 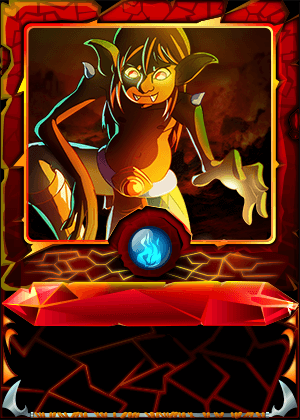 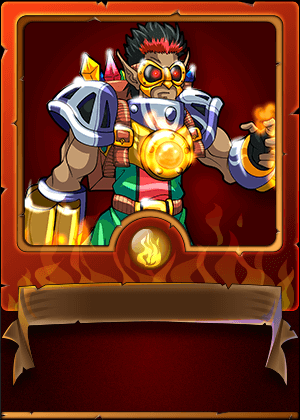 As one of a few, unique Magic based attackers for Fire, and one of the only ones many players will have in the early game, with very low investment, Goblin Shaman is an odd, auxiliary pick chosen primarily for his debuff. That being said, I think Pyre is the best Fire Summoner for him to capitalize off of, out of the Fire summoners. If we're including Legendaries, than obviously Yodin and Plado work nicely, and I would argue that the double debuff that Plado offers might be more valuable specifically for Goblin Shaman, as Plado is basically Pyre + Malric + Goblin Shaman already. But what about Dragon summoners? 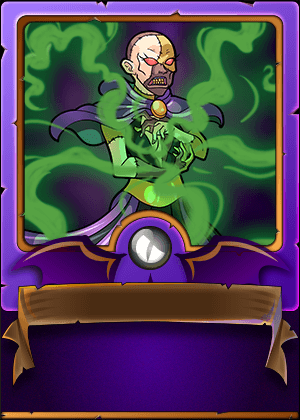 Delwyn is a powerful pick for Goblin Shaman, if one chose to go Fire Mage as a lineup, a very unusual, but surprisingly powerful line up in low and mid mana. Are there better Dragon summoners for teams, and better Fire Dragon teams? Absolutely! But I recommend summoners based solely off the card for these weekly challenges so, Delwyn wins this one. I like to pump Delwyn a bit in all of my recent articles, but let me just reiterate it here: Delwyn is a PROMO Summoner, granting +10% DEC Bonus on every win. With Alric leaving Modern format AND the Starter cards soon, Delwyn will be the only affordable option to utilize Water Magic as it has been used before. If you're a fan of Water Magic, or magic in general, a 1 BCX Delwyn is an absolute necessity.

That being said, I do not know if I would upgrade him beyond that, as he is quite costly for very low reward as a Common summoner.

Generally speaking, Goblin Shaman is a good middle buffer between your Tanks and your actual attackers, serving as a sort of support/debuffer somewhere in the middle. His weaken is strong, but he doesn't have much offensive presence. I like to put him in position 2-4, depending on mana and how many tanks / off-tanks I'm using.

However, Goblin Shaman benefits from being an easily placed card, and placement is not absolutely crucial, at least in Silver/Bronze.

Honestly, Goblin Shaman does pretty well in any ruleset, but IMO he really shines in these, Little League, where health pools are very low, Equalizer, where Weaken is a massive advantage, and Poison/Earthquake where that 1 health could be the difference between your opponent surviving 1 rounds and surviving 2!

He is also very powerful in Reverse Speed, where he shoots off magic fast and becomes slightly tankier with higher dodge chances.

Goblin Shaman is pretty much a worthless card in No Abilities, and only slightly okay at level 3, when it gains +1 Magic damage. As such, No Abilities is usually a ruleset to avoid with him.

Even Stevens prevents him from being used, as he costs 3 Mana.

Battle 1: Goblin Shaman sucks the Life out of you 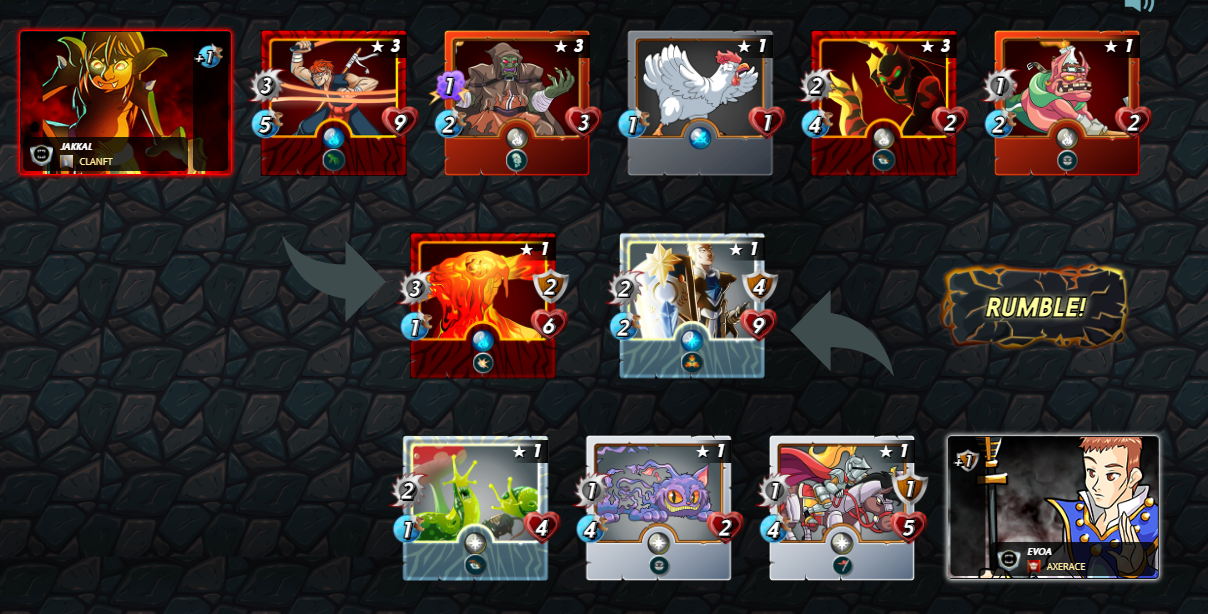 Not going to lie, I saw Earth, and I currently have a level 2 Mylor rented from the Pigeon Cup yesterday, and I was very tempted to play him instead...

But I am committed to playing a matchup where Fire is pitted against Tyrus and Mylor, two summoners that Fire can have a disadvantage against at times.

Fire is a powerful splinter, but with the current Meta in Silver and Bronze, it's definitely extremely lacking down in these ranks without a Yodin. That's not to say it's difficult to win, it just feels weaker generally, and there always feels like there's a better Earth kit or a better Life kit that gets the job done just as well, or better.

My Goblin Shaman doesn't actually shine much in this match, only offering a few hits on unarmored targets, and really, none of the modifiers are crucial for him either. As such, I think it's time for a 2nd Battle! Another 2 parter for a card that I used to love, but use a lot less recently due to my lack of love for the Fire splinter as a whole.

This is more of a battle! With Efreet and Spirit Miner, I'm up against some hefty, fast magic blasters, and Goblin Shaman's magic gives him perfect accuracy on his hit, which really helps in knocking down the Evasive Spirit Miner. Efreet also has blast and life leech, which allows him to heal twice, instead of once.

A close battle, but my tertiary tank, Lava Launcher, saves the day! One of my favorite new Fire cards by FAR, he's quickly become an absolute must-use for my high mana Fire teams.

Wanna play with a Goblin Shaman too? Join me on Splinterlands! Goblin Shaman is currently a starter card and you'll be able to use him to your heart's desire! But don't wait too long! He will be leaving the Modern format AND the Starter Cards when Chaos Legion arrives!

Join me on Splinterlands, if you use my link, here:
https://splinterlands.com?ref=jakkal
I'll send you 100 DEC when you sign up and get a spellbook, (as long as you show up as referred) which should help you get started via renting! Also, feel free to message me, I can answer any questions, give tips, etc. 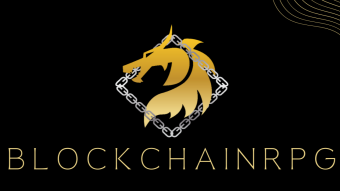