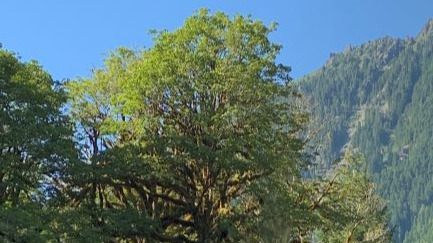 Spending time outdoors can reduce stress and lead to a healthier life. We should all strive to spend some time every week outdoors at a place like a park, several hours a month in a semi-wild location, and three days a year off the grid, according to Rachel Hopman, a neuroscientist at Northwestern University. My parents took me camping as early as I can remember, and I’ve noticed over the years that getting access to some of the camping places has become more competitive. This month, there have been articles about how America’s National Parks are overcrowded, as well as an article about how fertility rates are below replacement level in every single post-industrial nation.

I’ve written before about what the world might look like as our population peaks and begins to shrink. While I don’t think the world is overpopulated, we’re already at the point where we’ll see population declines; while many people see this as a terrible thing (and there will be difficulties), there’ll also be a silver lining. One of the benefits to a smaller population will be more access to nature.

Competition for the Natural World has Increased with Population Growth

I remember reading once about when the explorers reached what was then called the “New World.” Explorers arriving in Eastern Canada were amazed at how many fish were teeming in the waters. Of course, that’s not the case now. With a smaller world population, people were able to catch as many fish as they wanted; today, we need to worry about overfishing.

Sometimes I wish that I could see that. A wild world with nobody around for miles. Except in the most remote places, that doesn’t happen today.

We could expect things to change over hundreds of years, but even in my lifetime, competition for campground sites has increased dramatically. As a kid, we used to go to the ocean every year, as well as a campground in the Olympic National Forest in Washington state. Over this time period, the population of Washington state has grown from about 4.2 million to 7.6 million (in 2019). At the beginning of this time period, my family would go camping on Friday night and would easily find a camping spot. Over time, we’d start going up on Thursday night to get a space. Now, we go Monday morning to secure a spot at Olympic National Park. You have to get reservations at the ocean spot; the last time I went was 12 years ago; while reservations weren’t required then, I was lucky to find a spot.

This is something that I’ve noticed over the years, but I’m not the only one who’s seen this. The Wall Street Journal reports that Arches National Park in Southern Utah often fills up before 9 AM, and many national parks are seeing Disneyland-like crowds.

Will You See Fewer Crowds in the Future?

Researchers predict that the world population will peak somewhere between 2060 and 2070, with a maximum population of about 9 and a half billion. So if you’re young now or live to be very old, then you might see this. Depending on where you live, you might see less-dense crowds very soon. If you live in Japan or Spain, for example, experts believe that the population has already peaked, and there are fewer people today than there were a week ago. China, which up until recently has had a one-child policy in place, is likely to see their population begin to decrease in a few years. The US population is expected to peak shortly after 2060, so expect competition at your favorite national park to get worse before it gets better. But your children and grandchildren (if you choose to have them) are likely to see fewer crowds at the national parks. Countries which still have fertility rates higher than the replacement rate probably won’t see crowd density change in their lifetimes.

There are still places where you can go and be utterly alone, and still more places you can go and experience only see a few people, but most of the popular places are going to be crowded for quite some time. Maybe not forever though.

Books, politics, religion, and whatever is on my mind.